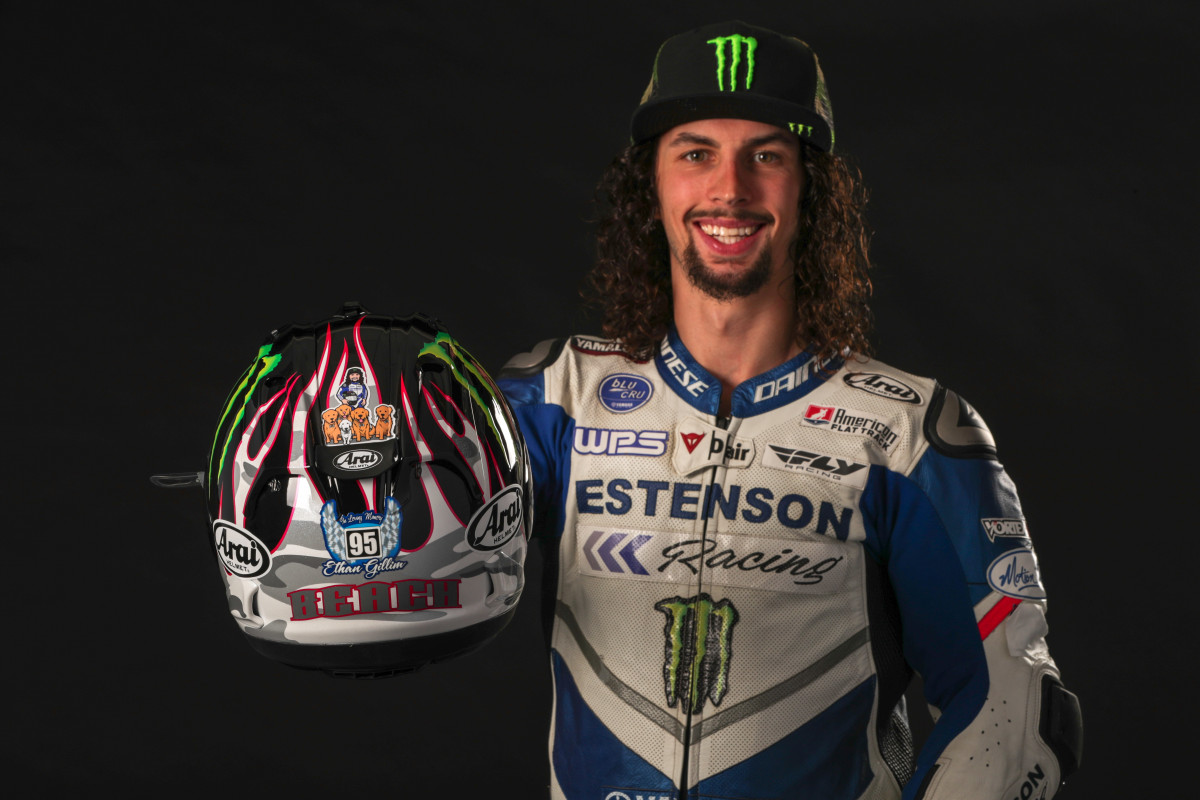 When race fans think of JD Beach, they may remember his historic wins in 2019 - bringing Yamaha its first premier class victories on a Twin in over three decades - or maybe they will recall how he scored the mind-bending achievement of back-to-back race wins, first in AFT at the 2019 Arizona Super TT and then as part of the MotoAmerica SuperBike Championship at VIRginia International Raceway the very next weekend. He is no doubt a formidable force on the racetrack, but the man behind the helmet is far less intimidating. With a southern charm and a nickname evoking a playful attitude, JD "Jiggy Dog" Beach seems to be a favorite among fans and the race community alike.

We caught up with JD at his compound in Philpot, KY for a quick catch-up with him and his pack of Golden Retrievers.

AFT: Seems like you’ve been doing what you can to stay busy and active on quarantine. Where have you been hunkering down and what’s your daily life looking like nowadays?

JD: After getting word in Florida that Daytona was a no-go, I came right back to my home in Philpot, KY. It’s basically Owensboro, but we have our own post office. (laughs)

My daily life really hasn’t changed too much. During this time of year, I’m home a lot because I usually spend the winter out in Arizona at the team’s race shop. So, I like to stay home between races. My trainer Ty Kady has been keeping me busy with training but watching so I don’t overdo it. I’ve been able to get a lot of projects done that I usually can’t do because we are gone racing.

AFT: Tell us about your pack of Golden Retrievers. How many do you have (it’s hard to count them when they are running about in your videos)? What are their names? Any funny stories involving your literal Wolf Pack?

JD: In total we have five Golden Retrievers, but two of them belong to Frankie Lee and his girlfriend Madeline. In order of age, their names are Comet, Ellie, Bobo, Copper and Gunner. 95% of the time, if I’m not training, I’m usually at home or at my shop right down the road from the house where I have my turn track. So, when everyone is at work I have all the dogs with me and I love it. After a long race weekend, on a Monday it’s one of the most peaceful things to load them in my truck and go to my land and throw a ball or stick into the pond and swim with them. No matter how the weekend went, they are just pumped to play ball. There are so many of them, each of them is so unique it’s hard to think of one story. 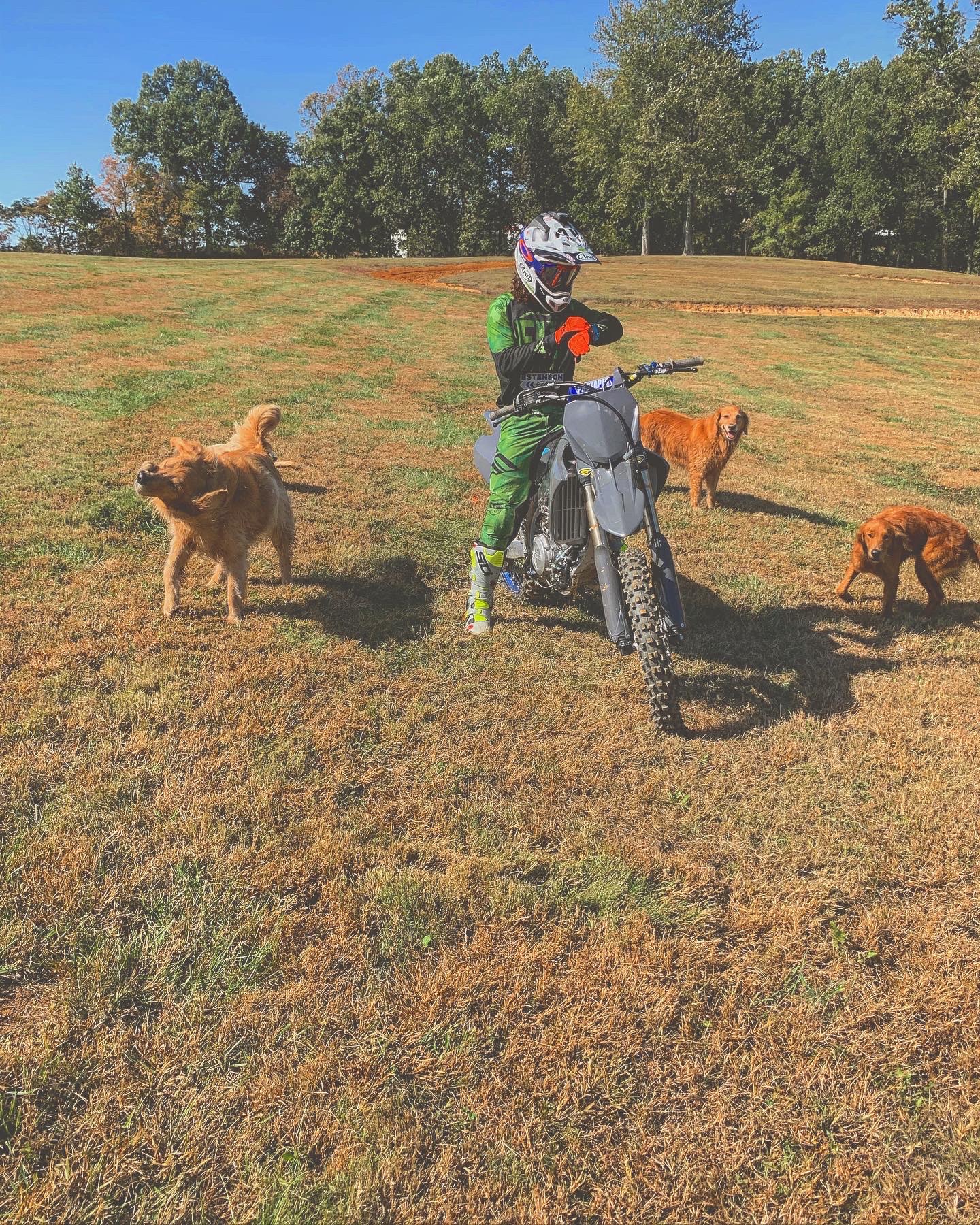 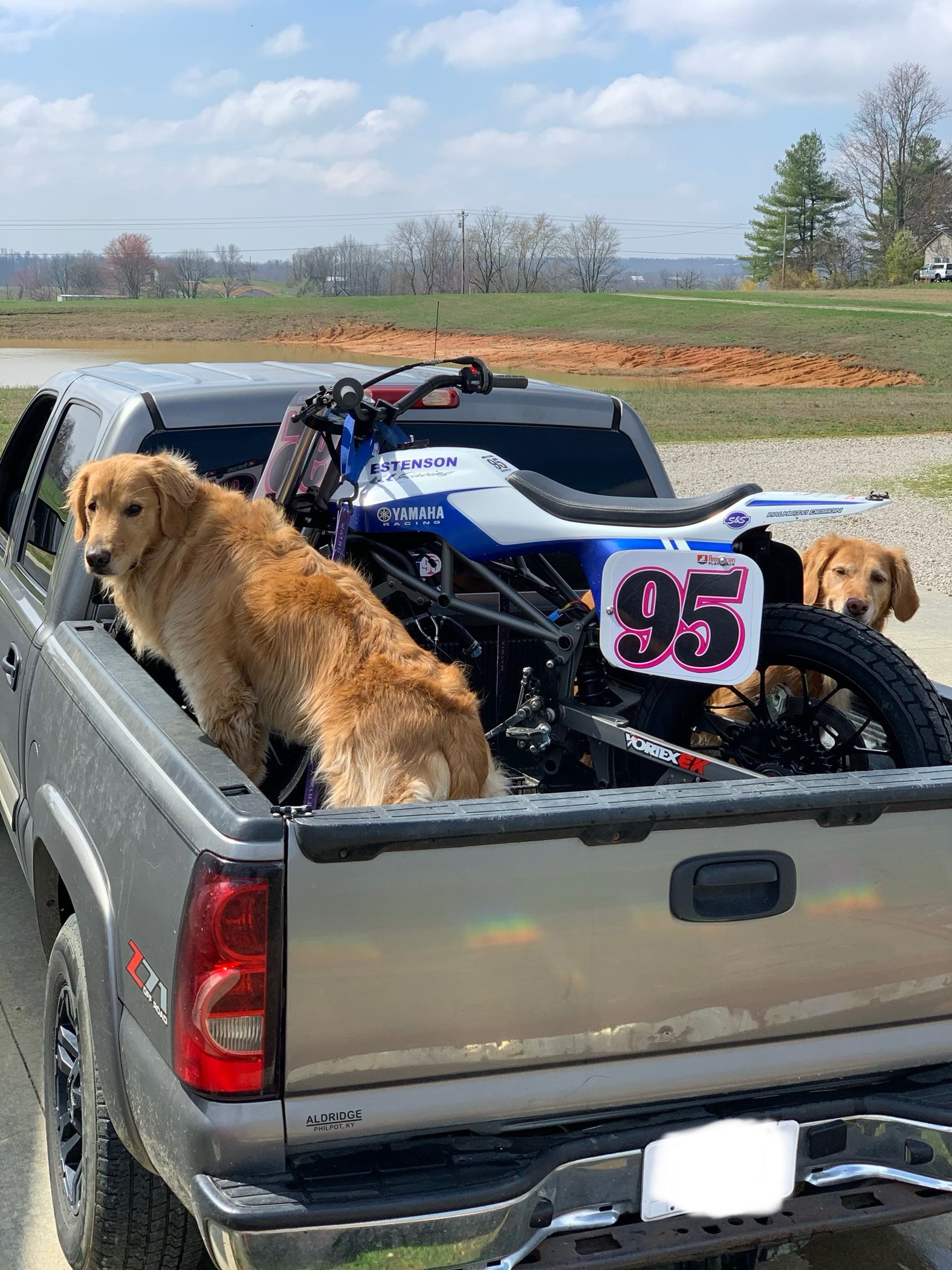 AFT: So if fans are looking for JD Beach’s best content on social media, where should they be looking? Do you prefer your Facebook, Instagram or Twitter? What about Snapchat or TikTok, how do you feel about those?

JD: I guess I would say I’m more of an Instagram person. I’ve got a Facebook fan page that I post my Instagram stuff to. I like Instagram because it’s kind of a one stop shop with posting stories and stuff on the feed. But if you follow me, most of the stories I post is just of the dogs. I recently just heard about TikTok but that’s not really my kind of thing.

AFT: Alright, we hop in your truck and turn on your stereo, what song or type of music is most likely to be playing?

JD: Well if we hop in my truck it’ll depend on how hard you shut the door. If you shut it too hard, I think it messes up the wires and the speakers won’t work. In my van, though, it’ll be country music. That’s what I’ve got going in my truck too. I use my truck on my land to do work and always have the dogs in the bed, so it’s torn up a little. The speakers come in and out depending on what I drive over and what shakes the truck.

AFT: We were very excited to see you full-time flat track. What influenced you to make that decision?

JD: I spent some sleepless nights trying to decide what I wanted to do, and decided to go flat track full time. But it really came down to the belief Tim (Estenson) had in me. Going into 2019, I barely knew him, I did two races for him in 2018 and he wanted me to race a twin for him in 2019, but I was still road racing and was still going to be on a 600. I think everyone knew I had spent too many years on a 600, and I was dying to have a shot on a SuperBike. I never had the conversation with Tim, but somehow, he knew. On Thanksgiving of 2018 I got a text from Tim and it just says, “Call me, we need to talk,” so in my mind I instantly start thinking of all the bad news that I could've been told. But what he said was basically, "I believe in you, and want to see you have your shot on a SuperBike." After all the years I’ve been trying to get on one, Tim made it happen. So at the end of 2019, I was talking to Tim and with the new rules in AFT, he wanted me to come full time. After the belief he had in me when it seemed like others didn’t, I knew I needed to keep going with him.

AFT: Talk about the 2020 version of your Yamaha MT-07 DT. Did you get a lot of testing and development done in the off season? How do you feel it’ll perform moving forward?

JD: So the 2020 bike is a little unknown right now. We did spend a lot of time testing and working on it this winter. The team has done an amazing job trying to improve the bike. I think I did more laps this winter than I would do the whole season of race weekends. It’s hard to say where we stack up because when you test in the went winter, it is only you and your team. So, it’ll be interesting to see how we are once we get racing. I can say, it’s actually fun to ride the bike now, and not more of a fight like we had last year. This year I think will be another somewhat of a development year, but we are way more prepared and have a plan of action. 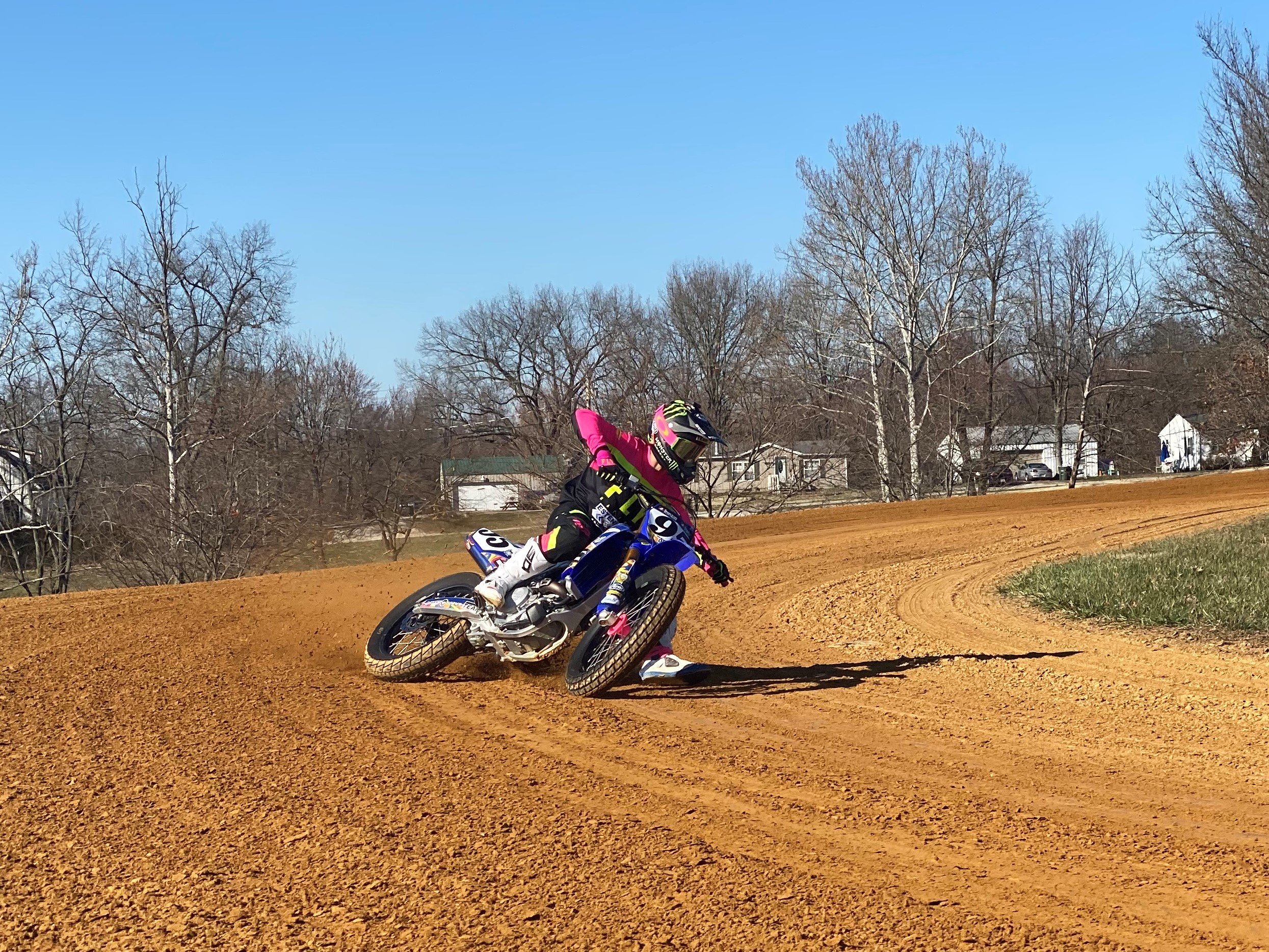 AFT: Which of the racetracks that you missed running during 2019 season are you most looking forward to riding for the first time in 2020? Why?

JD: I’m really looking forward to racing the Sacramento Mile. It’s one track I’ve never even been to. It has so much history behind it and I’ve watched races on tapes there since I was a little kid.

AFT: We all know that you are a formidable opponent on the TT’s, and it’s no surprise given your racing resume, but what type of track do you feel you could improve upon?

JD: It would be hard to pick one type of track that I need to improve on. I feel like growing up I was decent at all types of tracks. To me, the biggest thing I need to work on is being able to read the track better. I’ve spent my whole pro career basically road racing. So guys like Jared, Briar, Sammy, Bryan, everyone has years on me dealing with just dirt. Last year, sometimes I felt like I would get stuck running the same line every lap; not chasing the dirt like they would. But on the plus side, I can hit the same line within inches every lap.

AFT: What’s it like being a part of the Estenson Racing team and having guys like Tommy Hayden behind you?

JD: Being on the Estenson Racing team is great. Tim has hired some great guys to try and get this job done. I’ve got one of my best friends (Josh Day) as my crew chief and I think we work really well together. Every person on the team is awesome. Then having a guy like Tommy is really cool. I grew up looking up to the Haydens. I was in Valencia when Nicky won the world championship. One time, before I really knew them,  I was at a flat track race and Roger got on the podium and needed someone to hold his bike, and he just pointed at me. I jumped the fence and got to hold it, I thought I was a cool guy. (laughs)

I got to spend a lot of time training with Tommy the last few years he raced, so I know how hard he worked. It’s no different now with the job he has. It’s really cool to be able to get advice from him. He’s seen me ride a lot over at his dad’s house, so I think he knows my strengths and weaknesses; at the races he can watch and really help.

AFT: You accomplished a huge feat bringing two wins – both TTs - for the Yamaha in 2019. What are your personal goals for 2020?

JD: My goal for 2020 is I want to back up those wins. Even if it’s on a TT again. I want to get some more wins. Other than Jake’s podium last year at Laconia, I don’t think either one of us were in the top 5 on an oval. I  want to tick off two boxes this year: fighting consistently for top 5’s on the ovals and getting a podium on an oval.

AFT: After life returns to normal, where do you see the future of flat track is headed? We’ve got the SuperTwins class and the addition of TrackPass on NBC Sports Gold in 2020, and the growth of talent in the other two classes, what would you like to see next for AFT?

JD: First off, I know everyone is going through hard times and a lot of people aren’t working, so money will be tight. I hope that when things are back to normal we can put on some awesome racing for all of our loyal fans. We need the fans and I want to make sure I do my part to make the fans feel wanted at the track. I think the future for AFT is bright. They’ve been working day and night to improve the show and the racing. The pieces are all there, we just need to put them together right to have that great picture. As long as we all work together for the one goal we all have, I think we can get there. This sport has some great racers and great characters, we just need to showcase that.

AFT: We couldn’t have said it better ourselves, JD. Thanks for taking this time and we look forward to seeing you back out on the track soon. 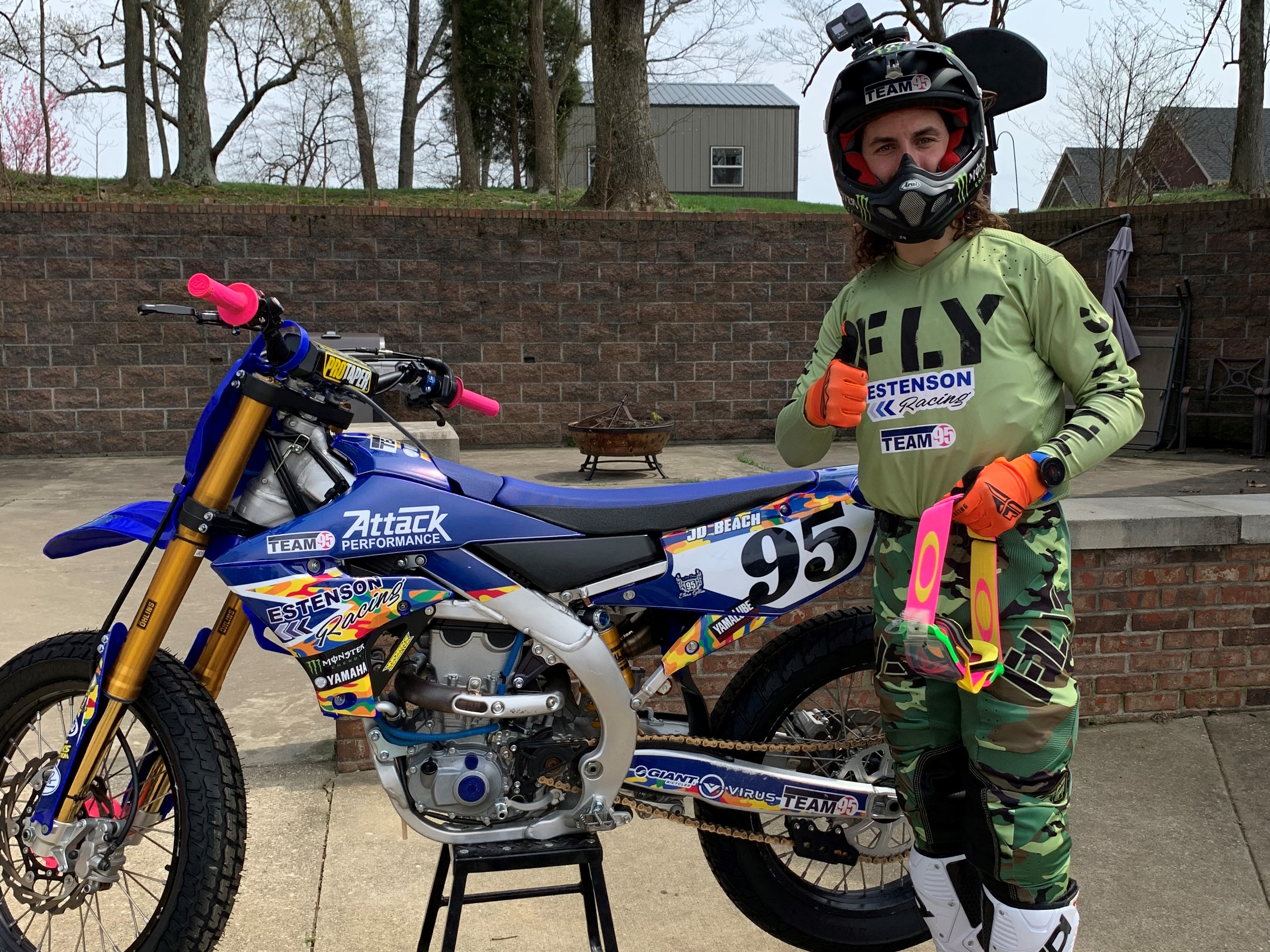 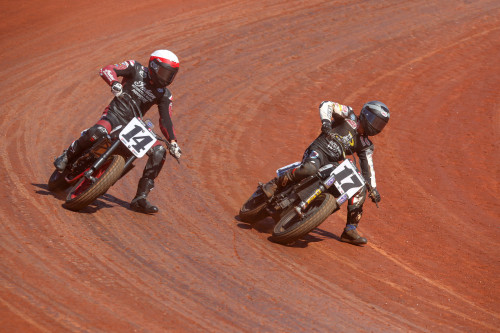 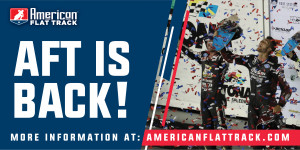 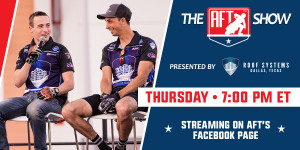