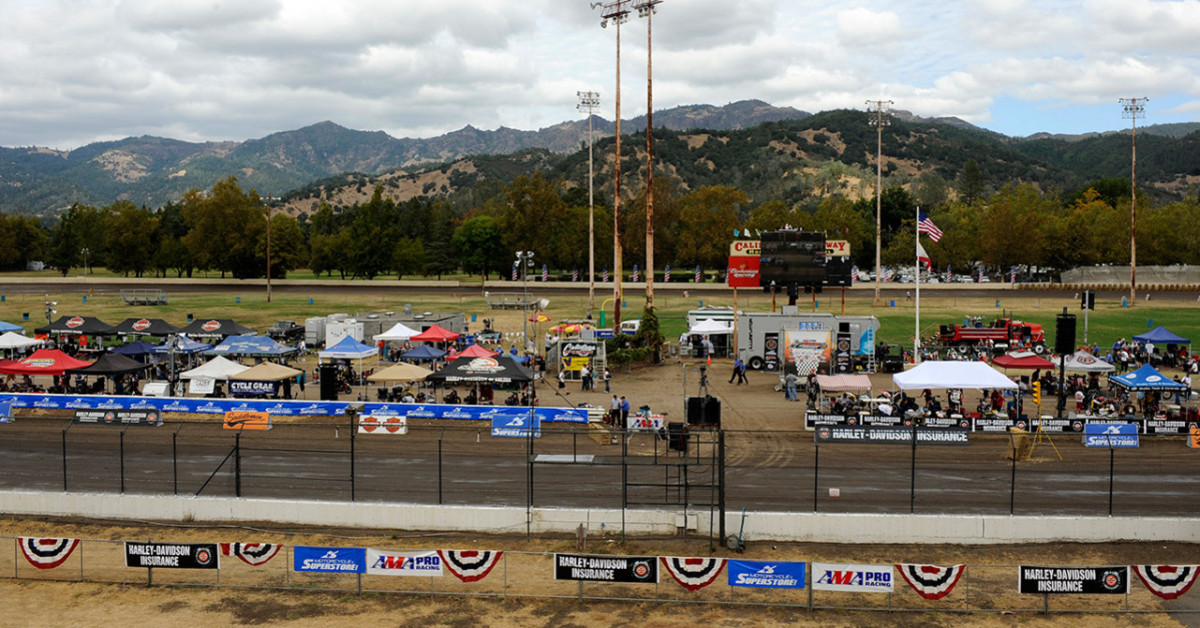 CALISTOGA, Calif. (Sept. 18, 2014) - The AMA Pro Flat Track Grand National Championship will return to Calistoga Speedway next Saturday, Sept. 27, bringing the chase for the national championship of flat track motorcycle racing back to the Napa Valley after an absence of two years.

The Ramspur Winery Calistoga Half-Mile presented by Victory Chevrolet at the Napa County Fairgrounds will be the 15th and next-to-last chance for riders in both the big-bore Expert Twin and Pro Singles categories to earn precious championship points in the series that will have crisscrossed the country, beginning in Daytona Beach, Fla., in March and ending in Pomona, Calif., Oct. 11.

Top riders expected to compete at Calistoga include Bryan Smith of Flint Mich., a former national champion and a four-time winner so far in 2014, and Michigan's Jared Mees, the 2012 Grand National Champion who is currently second in the standings.

Also expected is Jake Johnson, the 2011 winner at Calistoga and winner of the Grand National Championship in 2010 and 2011. The New Jersey native, sponsored by Napa Valley's Ramspur Winery, sits just 14 points behind Mees and 23 points behind Smith with two rounds remaining in 2014.

"It's exciting to bring a national championship series with the prestige of the AMA Pro Flat Track series back to the Napa Valley," said Terry Otton, Dirt Trackers, LLC, a valley resident and event co-promoter, along with Hall of Fame rider Eddie Mulder and Steve Delorenzi. "These riders are the best in the country and fans can expect close, hard racing because they know it's one of their last chances to make a run for that No. 1 plate."

Known for its long straightaways, Calistoga Speedway will offer riders plenty of room for passing and drafting in a series that is renowned for close action in which the race lead can change several times each lap. The track is also substantially different from what the riders saw during their last visit to Calistoga, with wider straightaways and progressive banking in the corners, the result of the most significant upgrade in its storied, 75-year history.

"Fans have told us that the changes have produced the best and most action-packed racing they have seen there in many years," noted Chris Morgan, partner and co-promoter of the Calistoga Half Mile who has also promoted many recent World of Outlaw events at the track. "We expect to see the same kind of excitement with flat track racers going shoulder-to-shoulder and handlebar-to-handlebar on a track where bikes can routinely hit speeds of 120 mph."

Tickets are now available for the race and a weekend of activity that will include a classic motorcycle display, autograph session and other events. Additional information is available at www.calistogahalfmile.com.