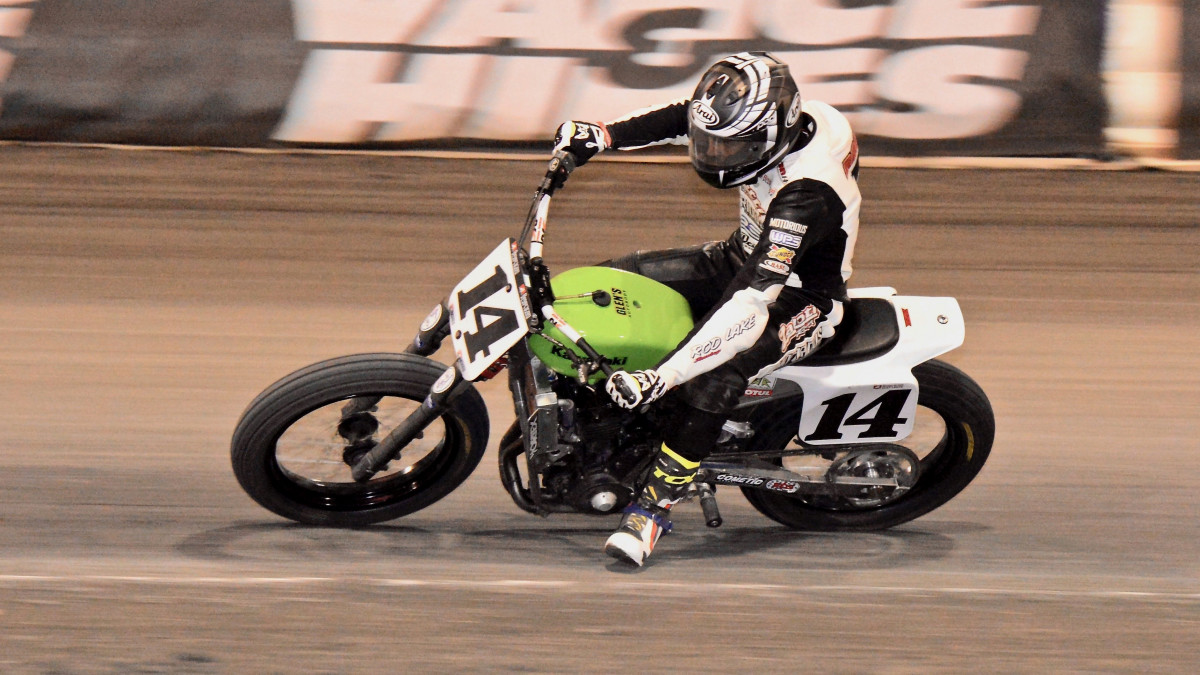 “It’s annoying how good he is…”

Briar Bauman, the 22-year-old Salinas, California native and sole rider on the Zanotti Racing Kawasaki team, isn’t talking humorously about one of his riding buddies, or his brother – and fellow competitor – Bronson.

He’s talking about Jared Mees – his on-track competition and, after the Texas Half-Mile, the guy leading the AFT Twins presented by Vance & Hines championship.

You might think there’d be a touch of resentment in the comment, but for Bauman there’s just respect. The two are friendly, and while they battle on the track they hang around a bit and train in their off hours, especially when Bauman and girlfriend – and fellow racer – Shayna Texter stay with the Mees clan in Florida between races and during the pre-season.

Mees, after all, is nothing but consistent, winning races even when there’s pressure on him to perform as there was last weekend in Texas following his disqualification from the Atlanta round for using a chemically altered rear tire.

And Bauman knows that for him to win his first AFT Twins title, consistency is key. 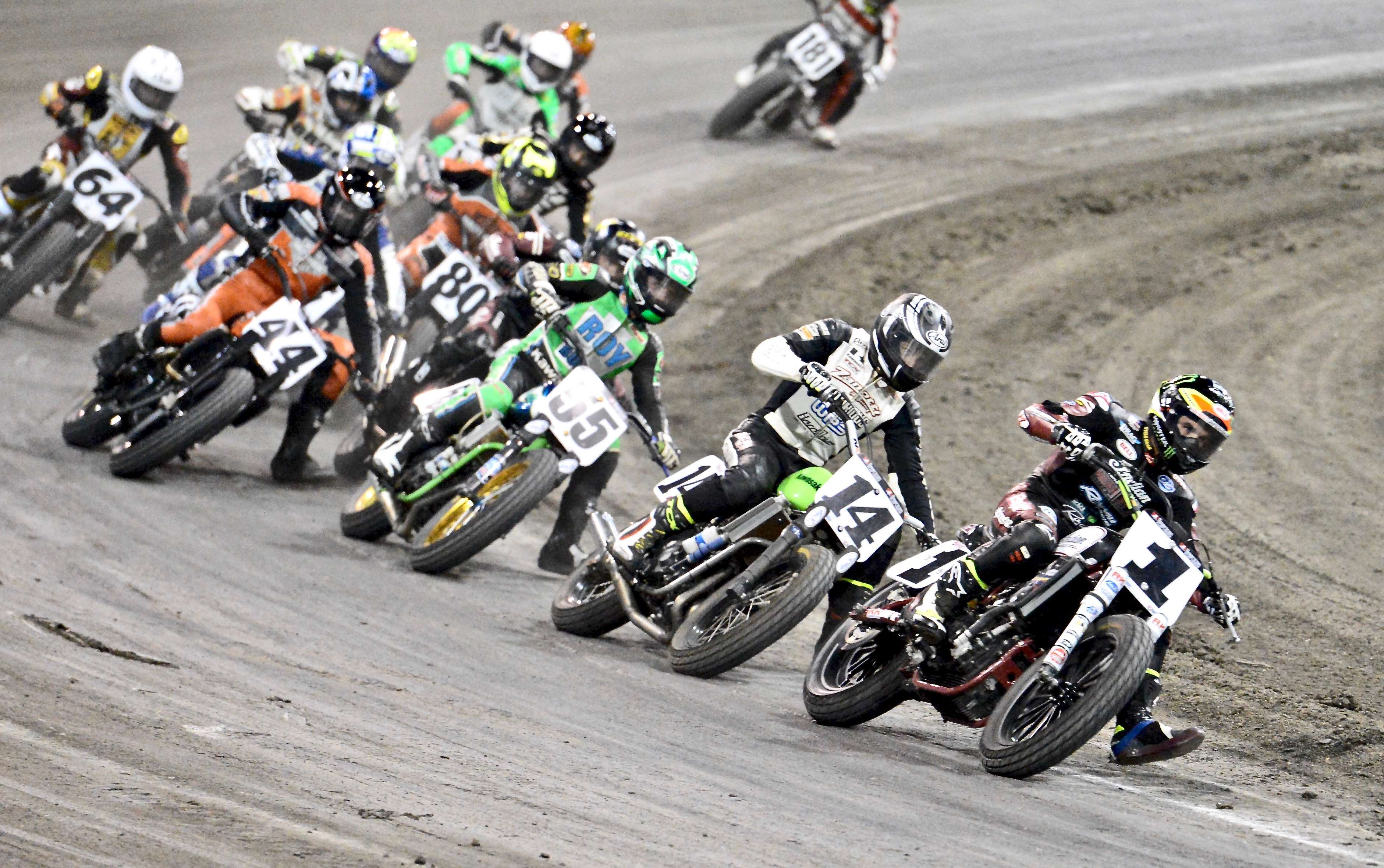 A good start helped, but no one other than Mees was going as fast as BB14 last Saturday night.

“[Jared] was on a rail out there in Texas,” Bauman told us in the days following the Texas Half-Mile, “but I was pretty happy to be able to run his pace for most of the race. It felt good, especially coming out of Atlanta where we struggled with set-up and finished 10th. We ran consistently fast laps pretty much throughout the Main in Texas. The Kawasaki was a little skittish at first, and the track was really hard and bumpy. But when the tires and suspension warmed up, and the track got a bit more rubber on it, the bike settled down nicely and we just rolled along, clicking off fast laps and putting a nice gap on [Chad] Cose. I didn’t know we’d pulled away like that until I snuck a look back with about five laps to go. When I saw [the gap we had] I sorta just put her on cruise control and tried to maintain focus, and I think Jared did, too. It felt really good.” 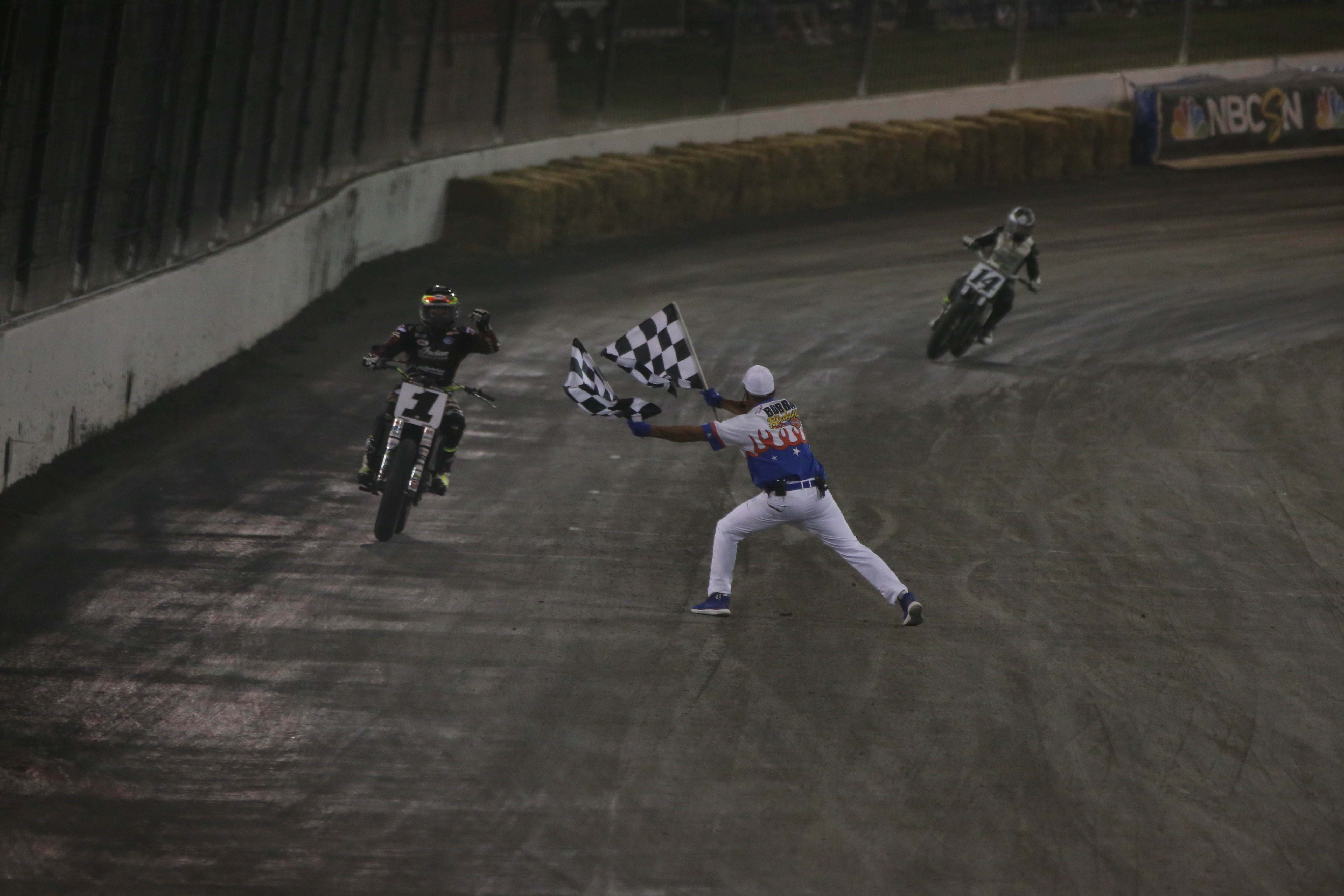 At the end it was just Mees and Bauman, and not a huge gap between them, either. "It felt good to run that pace," BB told AFT later.

Bauman’s consistency started early in Texas, with a 3rd in his Heat and a 3rd in his Semi, which put him on the front row for the Main. But the Everlasting Gobstopper question remains: Why hooked up and consistently fast in Texas, but not in Atlanta? Certainly, the two tracks are wildly different, and both changed in different ways throughout the 25-lap main event. According to Bauman, it’s mostly about bike set-up.

“Different race tracks need different things,” BB told us. “Every track, for example, has an ideal power-delivery scheme, which we can try to achieve with engine maps or more involved things like camshaft profiles. Every track has an ideal chassis setup, too, with an optimum front-to-rear balance and suspension settings. There are a lot of variables, but with so little track time, and not a lot of testing time available to teams, sometimes it’s a bit of a crap shoot.

“We definitely tamed our Kawasaki down a little for Texas,” BB added, “and ended up with a good combination of power and the ability to get that power to the ground without a lot of tire spin. That was key to us being able to roll around smoothly and not fight the hard and very bumpy racetrack. I could get on the throttle early, and not worry about [the bike] stepping out. The set-up your team chooses going into a weekend can definitely affect your performance; show up on a mellow bike on a track that’s hooked up and you’ll be at the back; come to a slick track with a bike that rips power-wise and you’ll be all over the place – and probably at the back again. 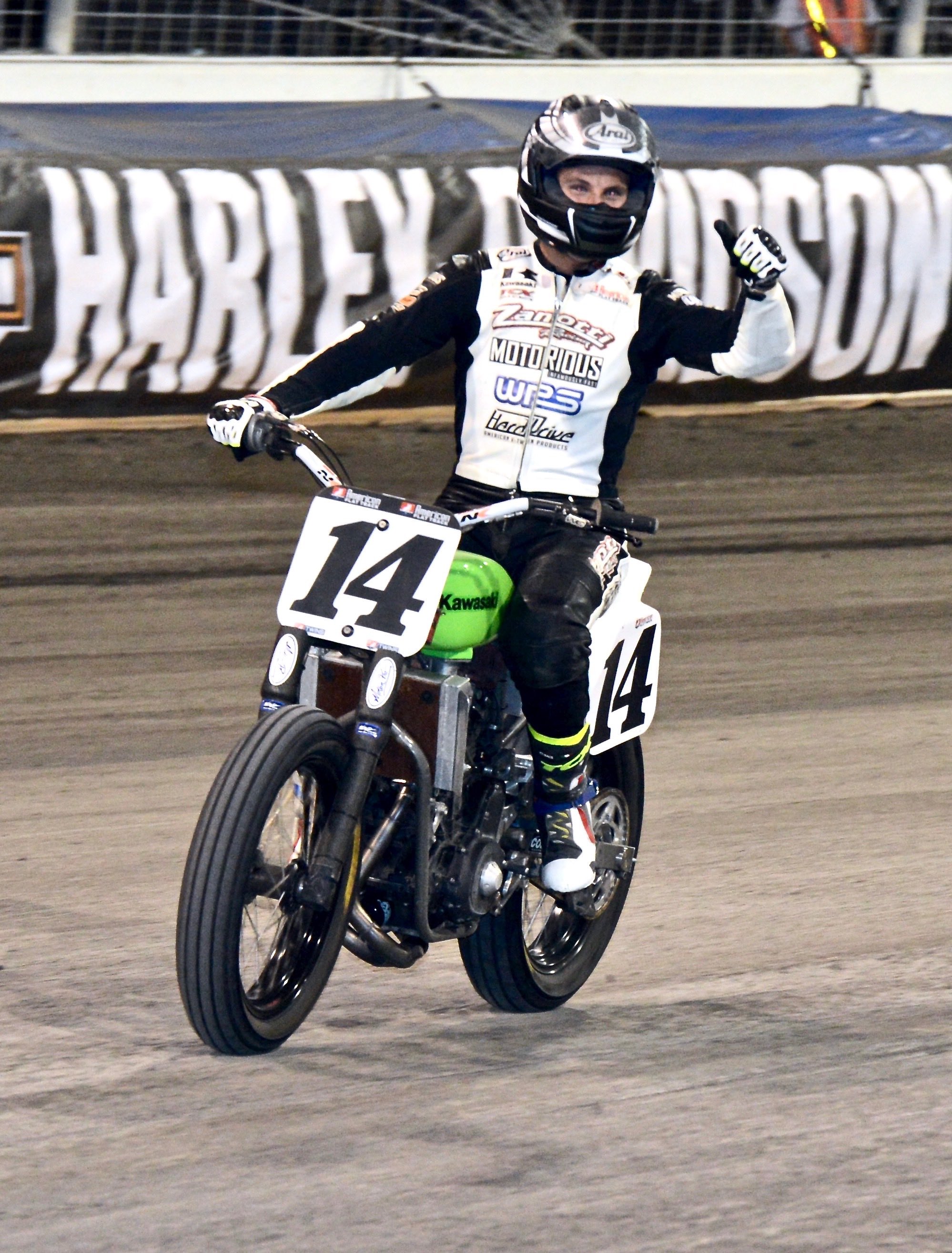 Considering the struggles of Atlanta, and the team's hard work between races, a runner-up spot at Texas Motor Speedway was sweet indeed...

“A dyno is very helpful,” Bauman says, “but there really is no substitute for track time. And the AFT teams really don’t get enough of that. So you end up looking at your notes from last year, if you’re returning to a track you raced at before, and taking into consideration what you know about your bike, the track itself, and the weather. You boil all that down and come up with a plan for the weekend. If you’re wrong in that first session, you make changes, and hopefully the right ones. But it’s sometimes it’s a guessing game, and sometimes you go the wrong way. That happened to us in Atlanta; we were off on setup, and we suffered in the Main. Fans may think a rider is riding poorly that day, or just having a bad day when that happens. But in the vast majority of occasions, it’s bike setup. We don’t get to test all the time like MotoGP or Supercross teams.

“Last year the Kawasaki was a new bike for Dave Zanotti and me, and we didn’t get to test much at all. This year we’ve only tested once, between Daytona and Atlanta. A lot of the time, the first time we get to try something new it’s in the first practice session. So there’s really quite a lot of guesswork involved. For many Twins riders, the first time they got on their race bike for the 2018 season was at Daytona! At Atlanta, Dave and I figured out pretty quickly that we were off setup-wise. It was a bit of a wake-up call. But the team put their heads together between races and busted their butts to put together a good package for Texas – and they did! It worked great. Hats off to them. It’s nice when it all comes together. Now we just need to put it on the top of the box.” 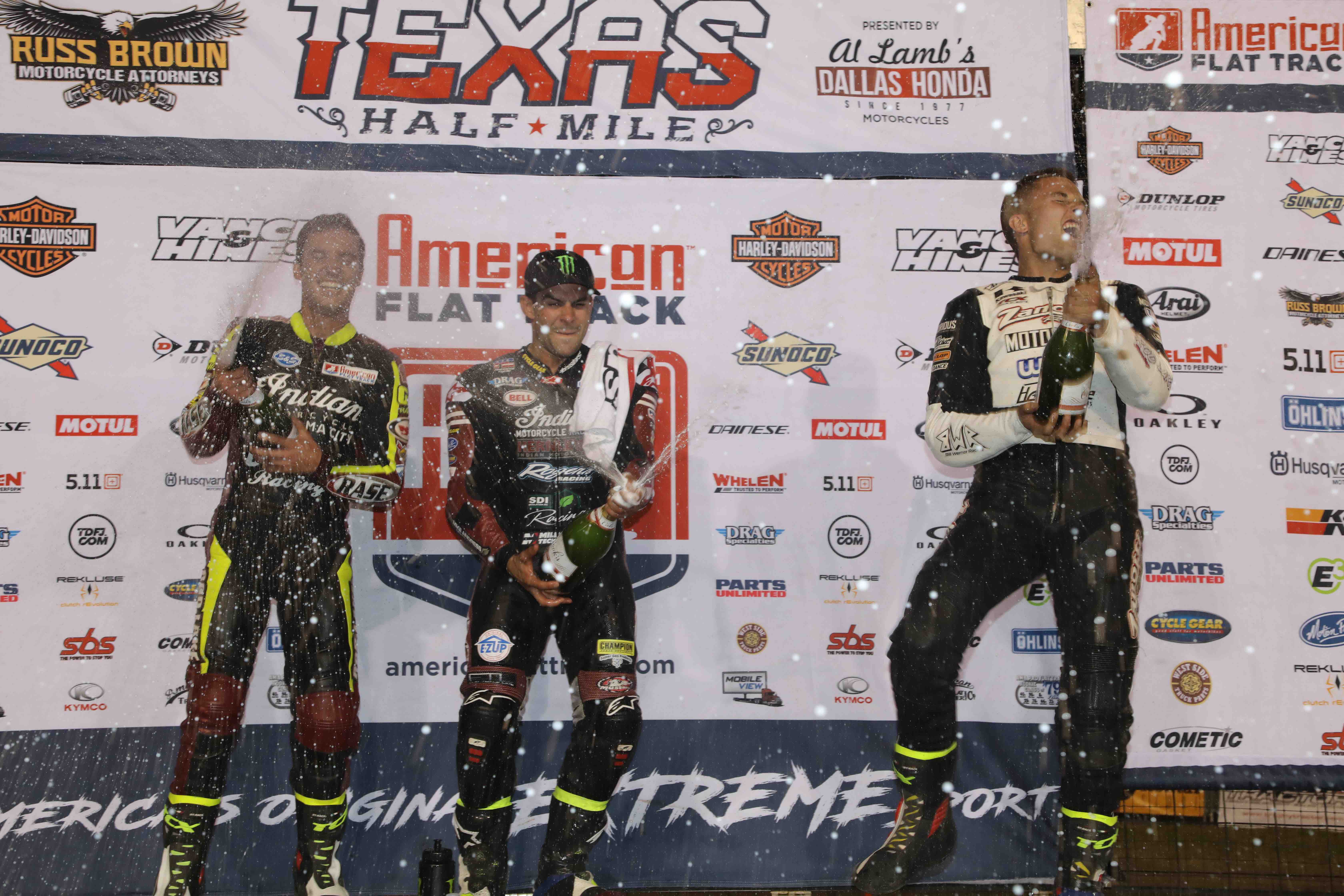 Bauman won two races last year, and is hoping there are many more trips to the box in 2018. And if he can do it with buddies, as happened in Texas, all the better.

The team’s successes at Daytona (4th) and Texas (2nd) make a win or three this year – Bauman won twice last year, at Lima, OH and at the Buffalo Chip TT – a pretty good bet. Additional help from Kawasaki’s contingency program is a help, as well, and the team is slowly starting to resemble a factory Kawasaki outfit. In fact, if you close your eyes after seeing Bauman’s lime-green racer with the classic Kawasaki script on the tank roar by, you can almost imagine Yvon DuHamel or Gary Nixon aboard the thing. It’s a good visual.

“I’m really liking our team’s look,” says Bauman, “and the look of our race bikes. It’s a classic look, for sure, and it works. The fans seem to enjoy it, too.”

Bauman is very definitely looking forward to this weekend’s Calistoga Half-Mile. “We got fifth at Calistoga last year,” he says. “We had good speed, but weren’t quite there on setup. I usually never sleep the night after a race; too much adrenaline. I close my eyes, but usually my brain is going over everything that happened that day. You’re thinking about what you did well, and not so well. And maybe some missed opportunities. That’s stuff you can use for the next race, and with so many races in a row coming up, it’s extra helpful right now. Shayna is the same way. She’s as mental as I am about things; we talk about the races all night long!”

Texter figures prominently in Bauman’s world these days. The two help each other at the track, often pitting next to each other and watching each other’s practices and races. They also do a lot of deer hunting back at Texter’s new Pennsylvania homestead. “I like bow hunting about as much as I love motorcycle racing,” Bauman says. “We’re both into it quite a bit, and it’s a great way to relax and recharge for the busy race weekends. But yeah, we help each other when we can at the races. There’s not always time, but it can be a help. Shayna’s not shy telling me what she sees, and I’m the same way. She was on fire at Texas, and nearly pulled off the win. I’m really proud of her! She’s really getting that Husky going now.

“I’m really excited about this season,” he adds. “We have a great team, and a great motorcycle, and now some good momentum. We’re chipping away at things on the Kawasaki, slowly but surely. We’re getting to know the bike, and we’re learning a lot every weekend. The key is to continue pushing things, continue being consistent and smart every weekend.”

Consistent. Just like that annoyingly fast friend of yours, eh Briar? 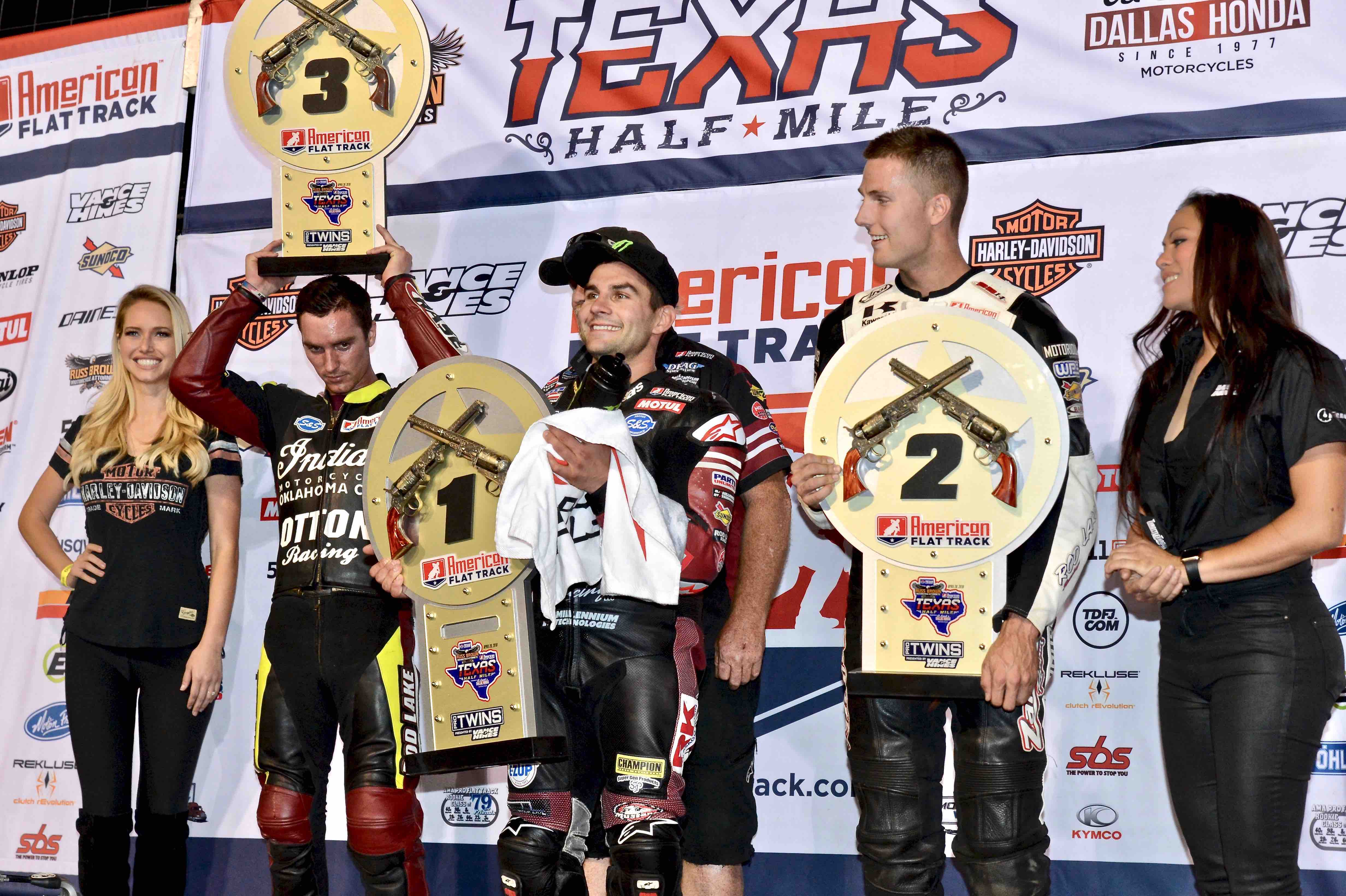