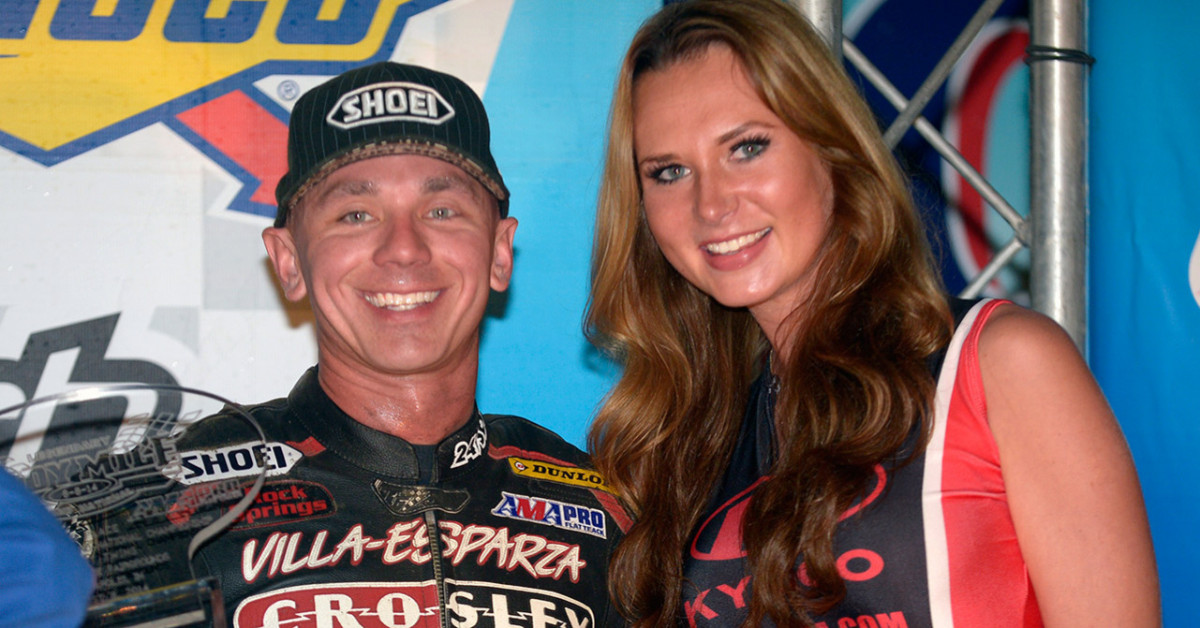 SACRAMENTO, Calif. (April 30, 2015) – The Sacramento Mile has been the domain of one rider for nearly half a decade, and that rider is Bryan Smith. Last year the racer from Flint, Michigan, became the first ever to win four-straight AMA Pro Grand Nationals on the famous mile at Cal Expo. Next month, on Saturday, May 30, 2015, Smith will attempt to push his record-setting winning streak to five during the milestone 50th running of the Sacramento Mile.

Since the return of the historic event to the AMA Pro Grand National Championship calendar in 2011, the race has been dominated by Smith. But while he’s won four-consecutive Sacramento Miles that doesn’t mean it came easily.

Smith said last year’s victory was his toughest one yet. In the 2014 edition any one of six riders looked to have a good shot at taking the win, but in spite of enduring relentless pressure all the way to the finish, Smith managed to win yet again on his Villa-Esparza/Crosley Radio Kawasaki. Smith battled with as many as five other riders in the lead pack throughout the 25-lap main, in the end the race came down to a drafting war with Smith just holding off a surging Jake Johnson by 3-100ths of a second. Jared Mees and Brandon Robinson were in the hunt as well, the top four separated by just 4-10ths of a second in one of the closest finishes in the long history of the race.

The win not only gave Smith a record of consecutive wins at Sacramento, it also moved him to the series lead at the halfway mark in the season. Unfortunately Smith could not quite hold on to that lead. In a heartbreaker a two dollar part failed (an oil sight glass) on Smith’s Kawasaki in the penultimate round of the series costing him the championship. Jared Mees went on to clinch the title.

So Smith will have more than enough incentive this year to try to earn the title he and many others felt he deserved to have last season and a record fifth win at Sacramento would help him move towards that goal.

“What we’ve been doing the past couple of seasons seems to have worked pretty well at Sacramento,” Smith said, stating the obvious. “Last year we got some serious competition at Sacramento and I think it’s even going to be tougher to win this year. There are several teams who have stepped up their programs for 2015, but our team has improved as well, so hopefully we’ll present a moving target to our competition.”

Smith said the sting he and his team felt after losing last year’s title over a something as inconsequential as a broken oil sight glass didn’t last long.

“Obviously it was disappointing,” he said. “But we knew that the championship should have been ours and I think all the fans saw that as well. But things like that happen in racing and we know we left nothing on the table. We went to the final round at Pomona (Calif.) last year and won that race and I think that left us with a positive outlook as we looked ahead to this season.”

Smith has some ground to make up after a difficult opening to 2015 at the Daytona Short Track in March.

“Obviously after the bad week I had down at Daytona I need all the wins I can get to put myself back in the championship picture,” he admitted. “Sacramento will be a big race for us and to be able to win a fifth straight there would be amazing.”

In addition to watching Smith attempt a “five-peat” in the premier GNC1 event at the Sacramento Mile this year, fans will also get the opportunity to see three-time World Superbike Champion Troy Bayliss racing a Lloyd Brothers Motorsports Ducati in his run at AMA Pro Grand National racing. They’ll also see the stars of tomorrow in the GNC2 class and watch legendary AMA Grand National Champions Jay Springsteen and Chris Carr renew their friendly rivalry in the “Clash of the Titans II”. Springsteen took victory in last year’s inaugural Clash by the slightest of margins. He’ll be looking to repeat at this year’s event, but look for Carr to go all out to try to even the score.

Red Lion Woodlake Hotel Sacramento will once again be the Official Hotel for the 2015 Sacramento Mile. Make your reservations today by calling 1-916-922-2020 and mention AMA Pro to secure your fan rate. Limited space is available.

The AMA Pro Grand National Championship series is one of the longest running motorcycle racing championships in the world. On the long straights of the Sacramento Mile top speeds can reach 130 miles per hour. Flat track racing has produced many of America’s Motorcycle Grand Prix Champions such as Kenny Roberts, Eddie Lawson, Wayne Rainey, Kenny Roberts, Jr. and Nicky Hayden. Visit www.sactomile.com to keep up with all the latest on the event.

Practice for the 50th Sacramento Mile begins on Saturday, May 30 at 2:00 p.m. and opening ceremonies for the evening program kick off at 6:00 p.m.

*** 2015 Ticket Information: Ticket information is available for the May 30, 2015 Sacramento Mile at www.sactomile.com.

Tickets for groups of 20 or more also are available. Contact the Cal Expo Group Sales Department at boxoffice@calexpo.com for more information.