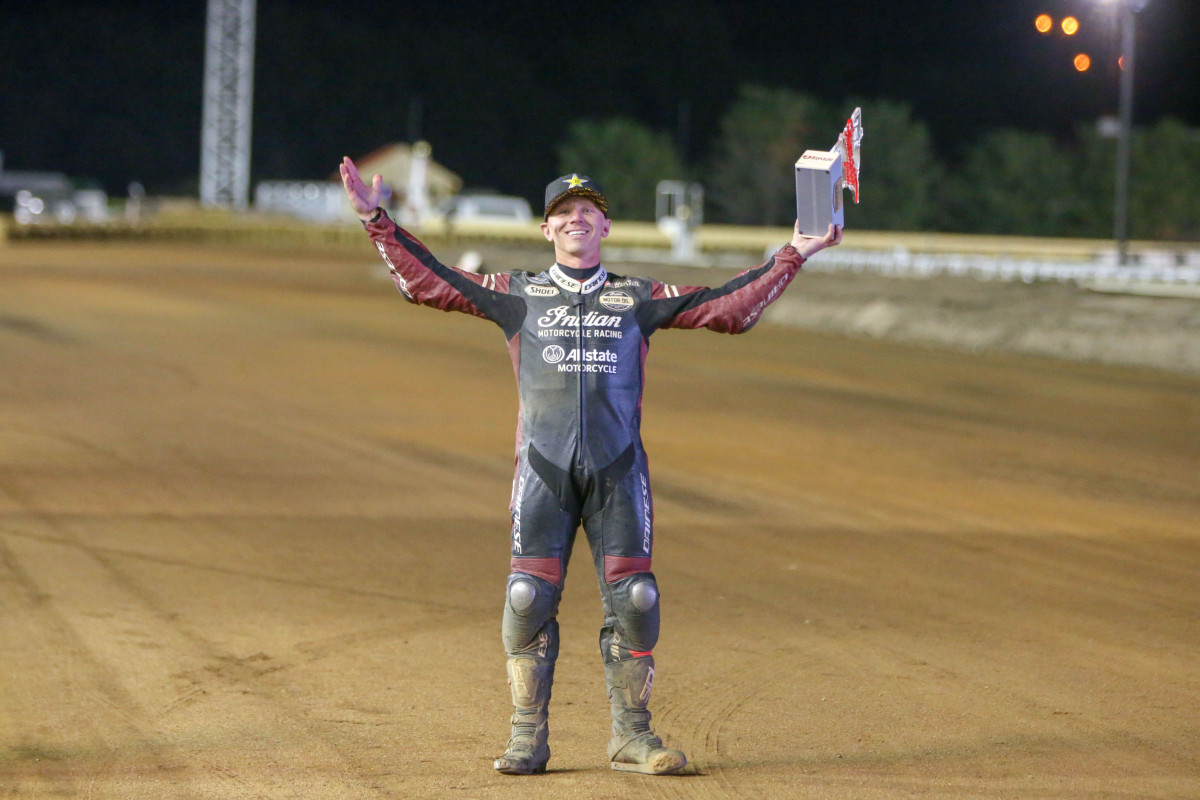 Briar Bauman (No. 14 Zanotti Racing Indian Scout FTR750), fresh off his first victory of 2018 at the Williams Grove Half-Mile, looked certain to continue his devastating form. He was basically running away from the field and powering to his first-career Mile victory to complete the Grand Slam when disaster struck. With just two of 25 laps remaining and holding a massive lead over second, Bauman’s Scout FTR750 ran out of fuel and he was forced out of contention.

Smith was more than happy to storm by the helpless Bauman after earlier doing the same to reigning Grand National Champion Jared Mees (No. 1 Indian Motorcycle Rogers Racing SDI Scout FTR750), who encountered a mechanical problem late in the race while trailing the speedy Bauman.

Smith said, “I saw Jared peel off and I thought, ‘Okay, I’ve got second. This is good, but there’s no catching Briar, he’s putting the clinic on everyone today.’ And then I did a double take and thought I saw the #14 pulling off. ‘Am I leading this thing?’ I’d rather be lucky than good any day!” 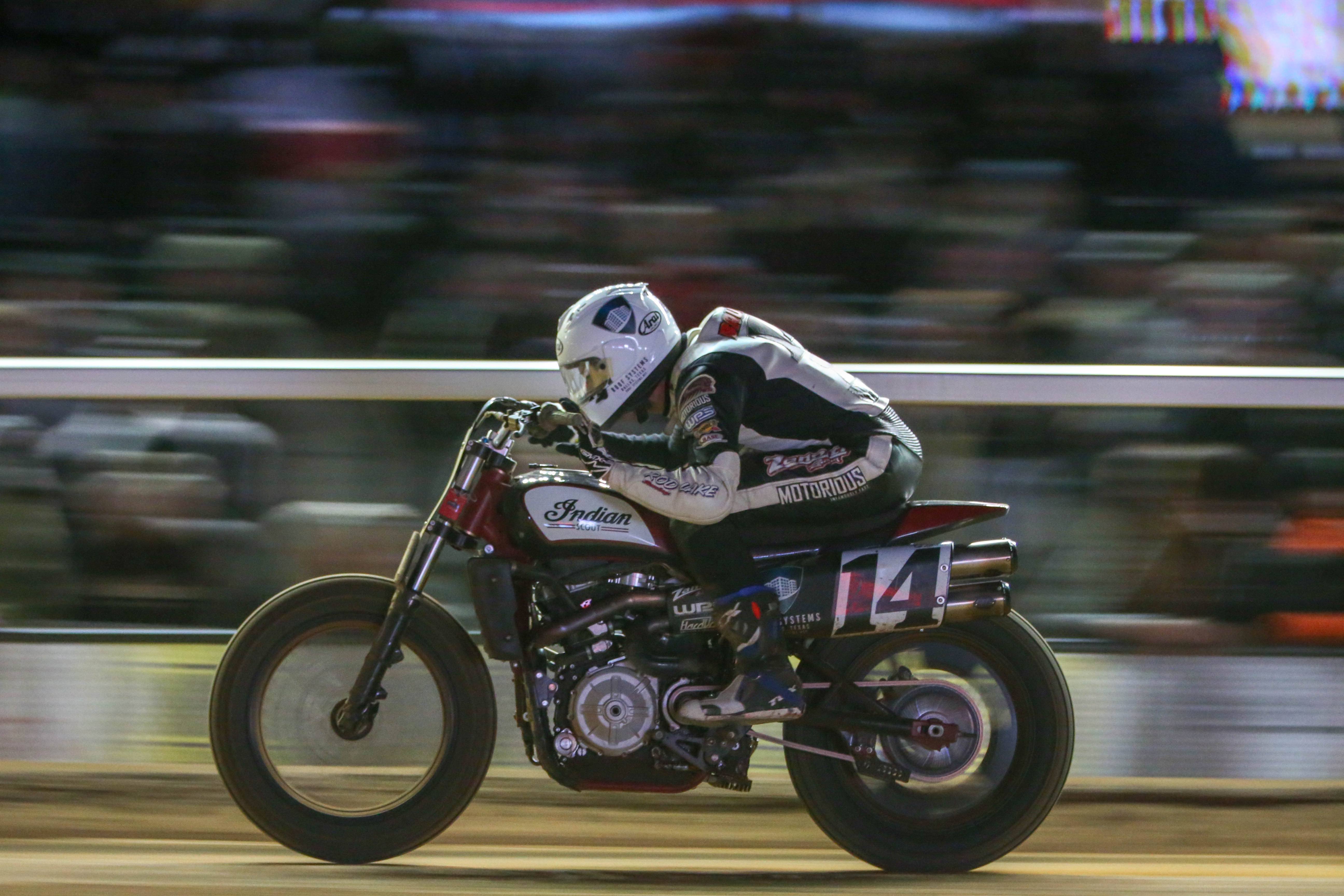 Briar Bauman had the Minnesota Mile won - right until his Indian Scout FTR750 ran out of fuel.

The evening marked American Flat Track’s first trip to the Minneapolis area and Canterbury Park since 2010, with preparation of the soft and sandy horse-racing surface a key issue. Several days of track prep yielded a racetrack that was both groove and cushion, and one that offered multi-line racing - which typically yields more exciting action and more passing opportunities for riders. While there were some rough spots, most riders felt the track to be challenging and one that rewarded bravery, skill and creativity.

“This is definitely one of the toughest, most challenging, technical Miles we race,” Smith said. “It was a free-for-all. Everybody was taking different lines and doing different things.”

Bauman and Mees appeared most ready to capitalize, the two engaging in a thrilling back-and-forth dogfight during the race’s opening half before Bauman broke Mees’ challenge. Bauman was well on his way to a statement-making victory before the dramatic twist finish.

The DNF ends Mees’ hopes at equaling the legendary Ricky Graham for most wins in a single season at 12. However, if he concludes his season with an 11th triumph in next weekend’s 2018 Meadowlands Mile finale, Mees will lay claim to the highest single-season win percentage in American Flat Track history. 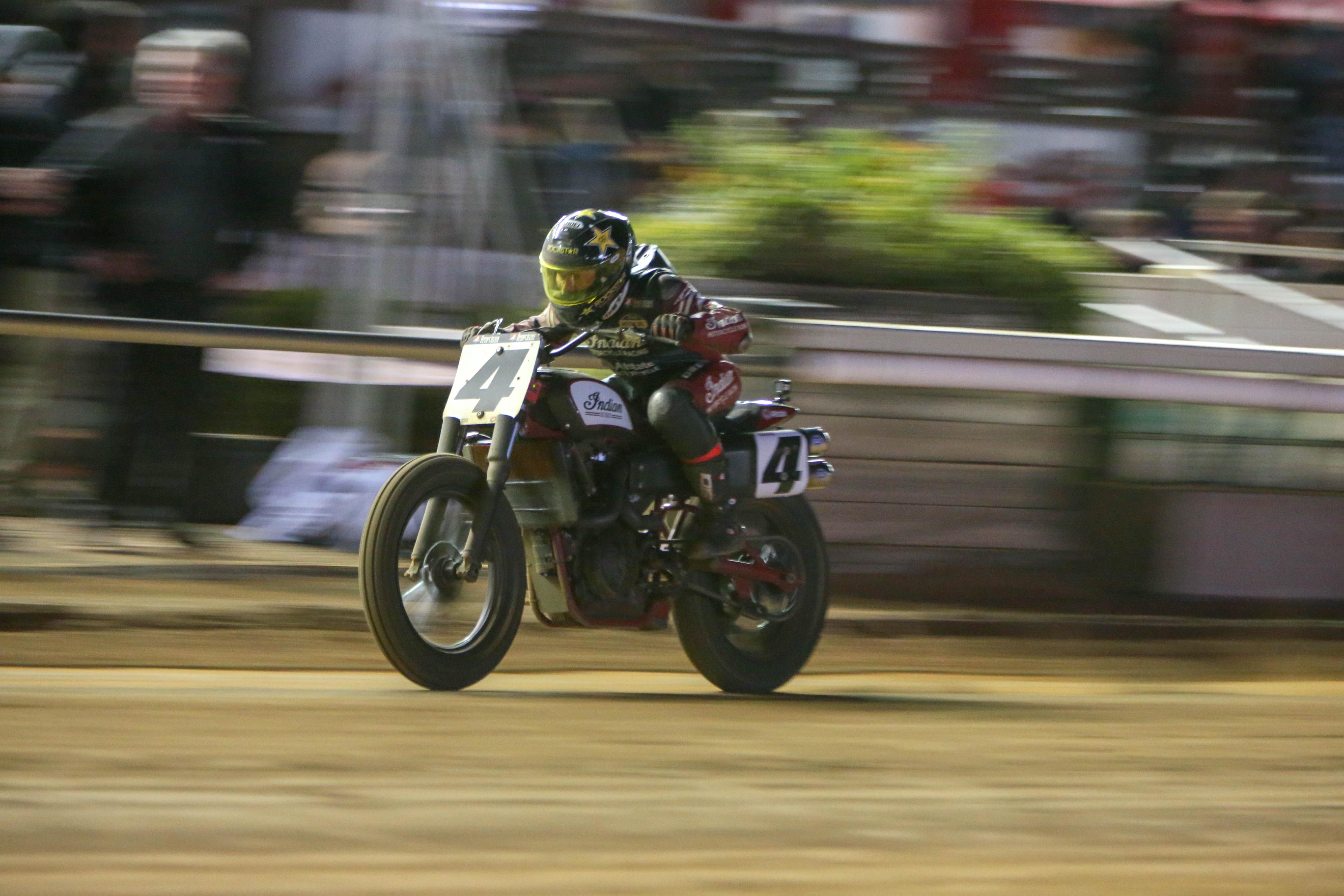 Bryan Smith ... in the right place at the right time. He was fast and smooth all night, and it paid off.

The AFT Singles Minnesota Mile Main Event proved to be a head-to-head battle of champions.

Carlile edged Bromley for the holeshot and immediately put his head down. His breakaway strategy allowed him to successfully break free from all pursuers – save one.

Carlile continued to hold point despite coming under intense pressure. Bromley demonstrated superior corner speed late in the shootout but simply could not find a way past 2017 champ Carlile, who held on to claim the checkered flag by a 0.196 seconds margin of victory and who’s quickly becoming a bit of an AFT Singles ‘Mile Master’ himself. 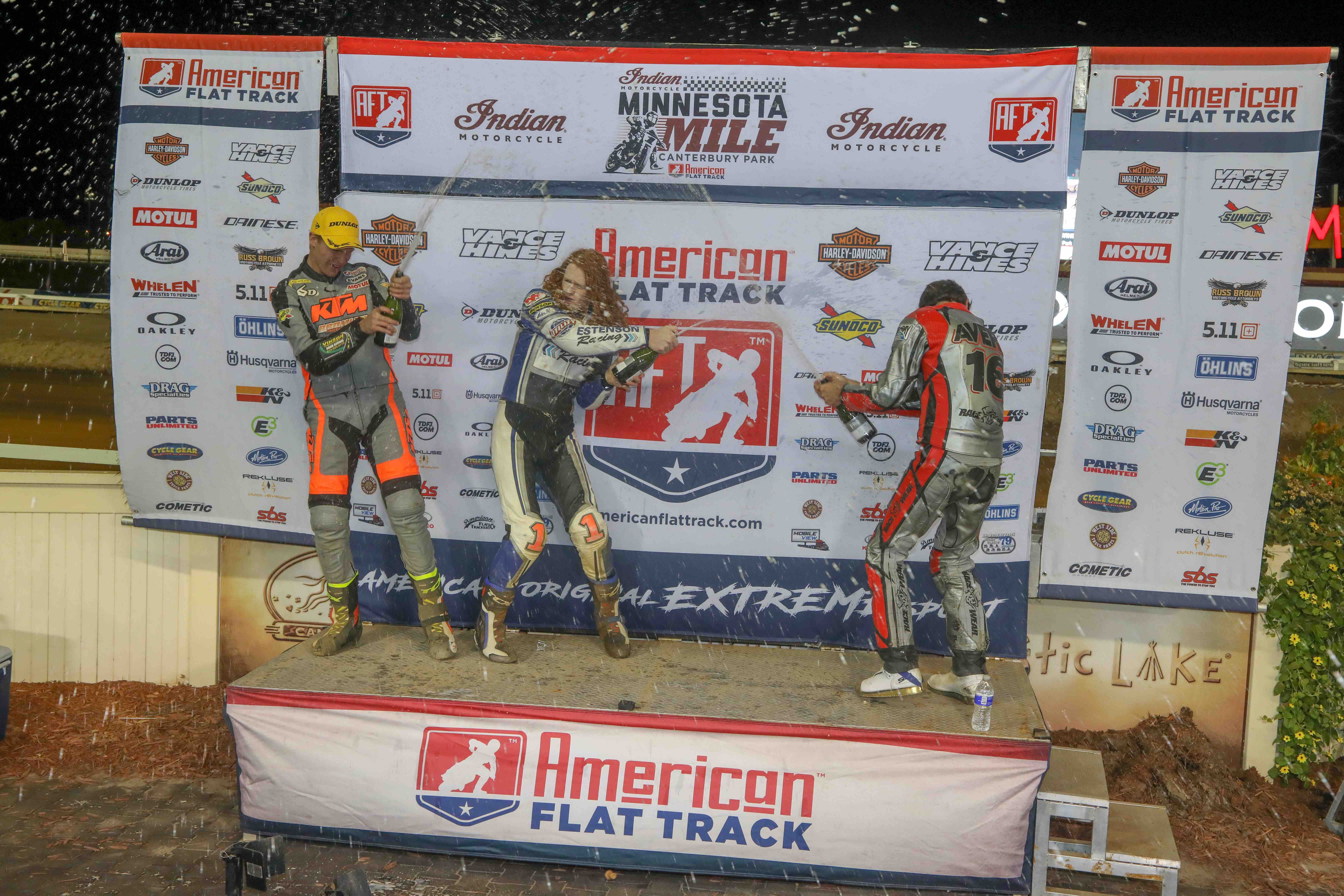 The win was Carlile’s third Mile triumph of 2018 after going winless during his championship-winning season. He’ll also have an opportunity to gain another small measure of revenge in next weekend’s season finale where he could equal Bromley for most wins in 2018 at four.

After the race the ‘Flying Tomato’ explained that his win was even more dramatic than it appeared from the fences: “Mentally, the win was huge because we had an electrical issue come in with about four laps to go. As soon as I let off the gas, the power would die to the bike. I would have to get it back to wide open for it to start up again. I looked back after the third time it happened and Dan was right on my tail. Luckily, he’s a great rider and no one ran into each other out there. Fortunately, the bike didn’t shut off. The last time coming through 3 and 4 I was really scared; I just wicked it right on and the thing kicked out sideways. Luckily the old girl fired up one more time.”

Bromley’s runner-up finish was his 12th podium in 17 races this season.

Tristan Avery (No. 16 Ron Ayers/Mr. Sign Honda CRF450R) fought his way forward throughout the 15-lap affair, making up for his poor start to ultimately clawing his way into a pack battle for third. In the end he secured the position to garner his first podium finish of 2018. Ryan Wells (No. 94 RMR/Al Lamb’s Dallas Honda CRF450) and Cameron Smith (No. 44 D&D Cycles/Basciani Foods/Greg Vietri Honda CRF450R) filled out the top five.

American Flat Track’s 2018 finale happens next weekend at the Meadowlands Mile presented by Ducati at the MetLife Sports Complex in East Rutherford, NJ on October 6. Live coverage can be viewed on FansChoice.tv starting at 3:30 pm ET with Opening Ceremonies scheduled to get underway at 6:15 pm ET. Tickets are on sale now and can be purchased here: https://www.showclix.com/event/meadowlands-mile

For a thoroughly in-depth Indian Motorcycle Minnesota Mile experience with flag-to-flag coverage of both Main events enhanced by drone and onboard footage, be sure to catch the NBCSN telecast of the Minnesota Mile on Sunday, October 14 at 5:00 pm ET (2:00 pm PT). Be sure to check your local listings, or for the complete broadcast schedule for AFT on NBCSN, please visit http://www.americanflattrack.com/events-nbcsn﻿ 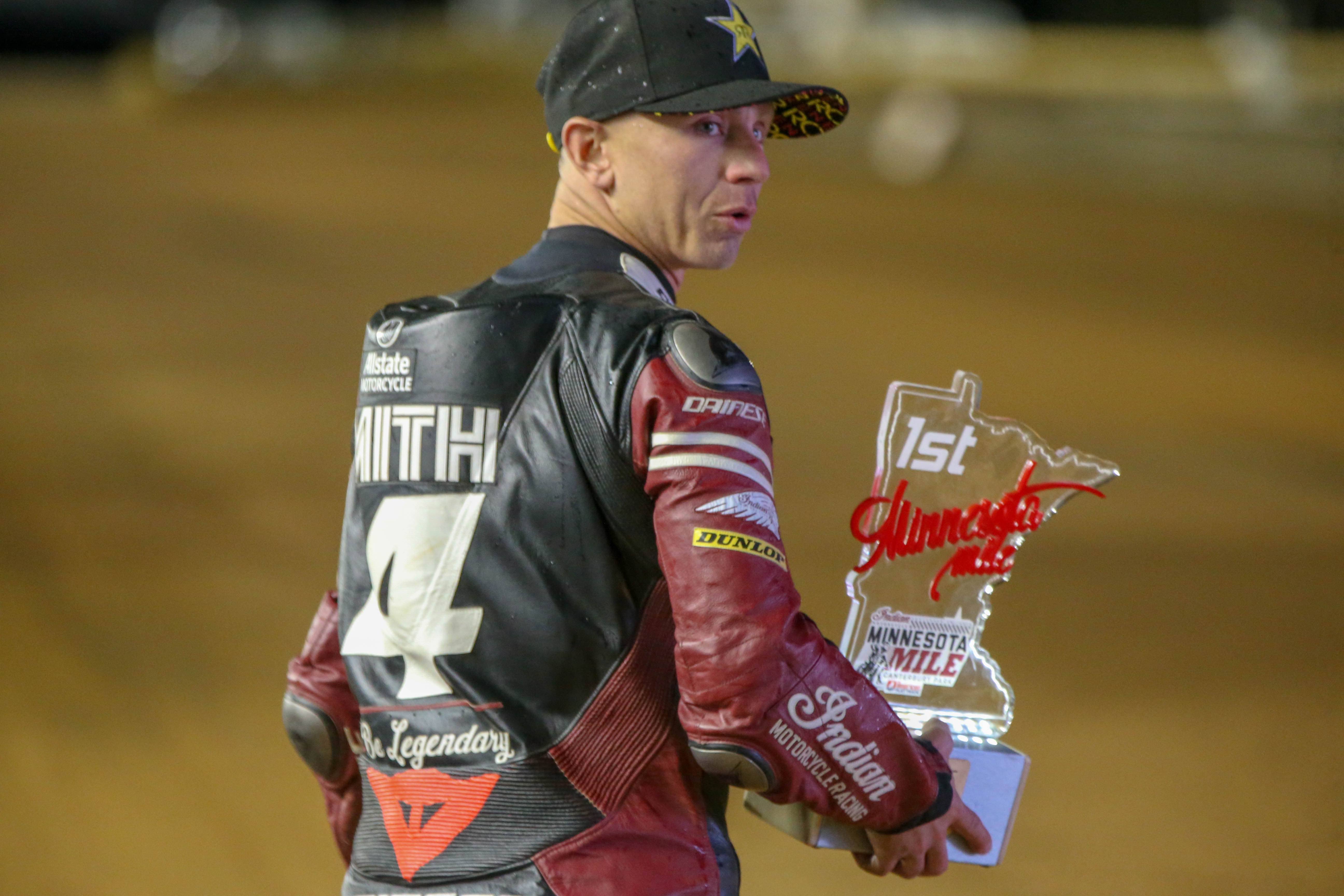