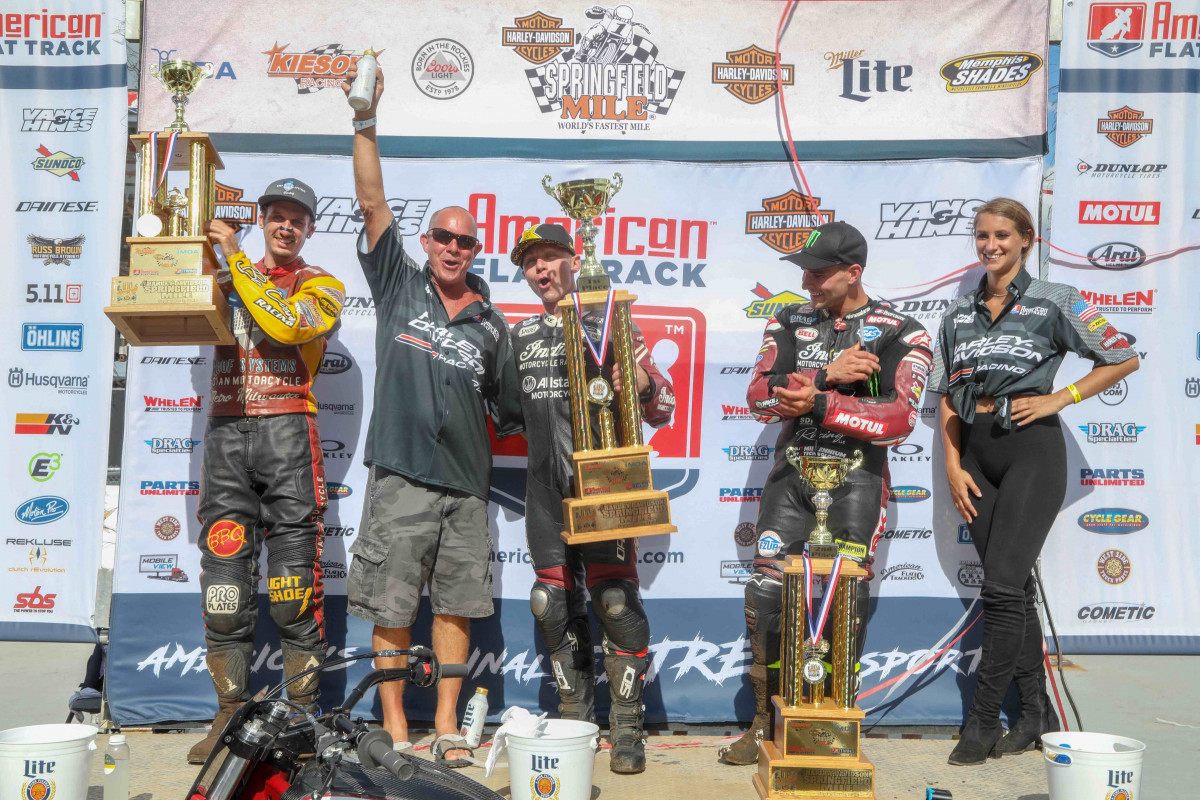 Smith even predicted his victory, telling AFT announcer Scottie Deubler on Deubler’s Off The Groove podcast he was “going to win the Springfield Mile!”

Mees was still a winner, however, as his runner-up finish secured his fifth AFT Twins presented by Vance & Hines championship. His 10 wins and victories in four of the five Miles in 2018 - plus his 40 Grand National Championship victories, fourth all time - make him a legitimate giant in the sport.

Smith’s win, which featured a fierce back-and-forth battle between four of AFT’s top riders for the majority of the 25-lap race, was his first in sixteen months (he won the May, 2017 Springfield Mile) but his ninth at the legendary Illinois venue.

“It’s been too long,” said Smith from the podium after climbing the massive catch fence to salute the fans. “I’ve dreamed about racing here since I was six years old; hasn’t changed now that I’m 35. It’s been a roller coaster season so I wanted to finish on a high note. Winning Springfield in front of all the Illinois fans… I couldn’t ask for anything better. That’s what they call me [the Mile master], but [Mees and Carver Jr.] are trying to take my lunch money! They’re making me work for it. Hats off to them, and thanks to all the fans.” 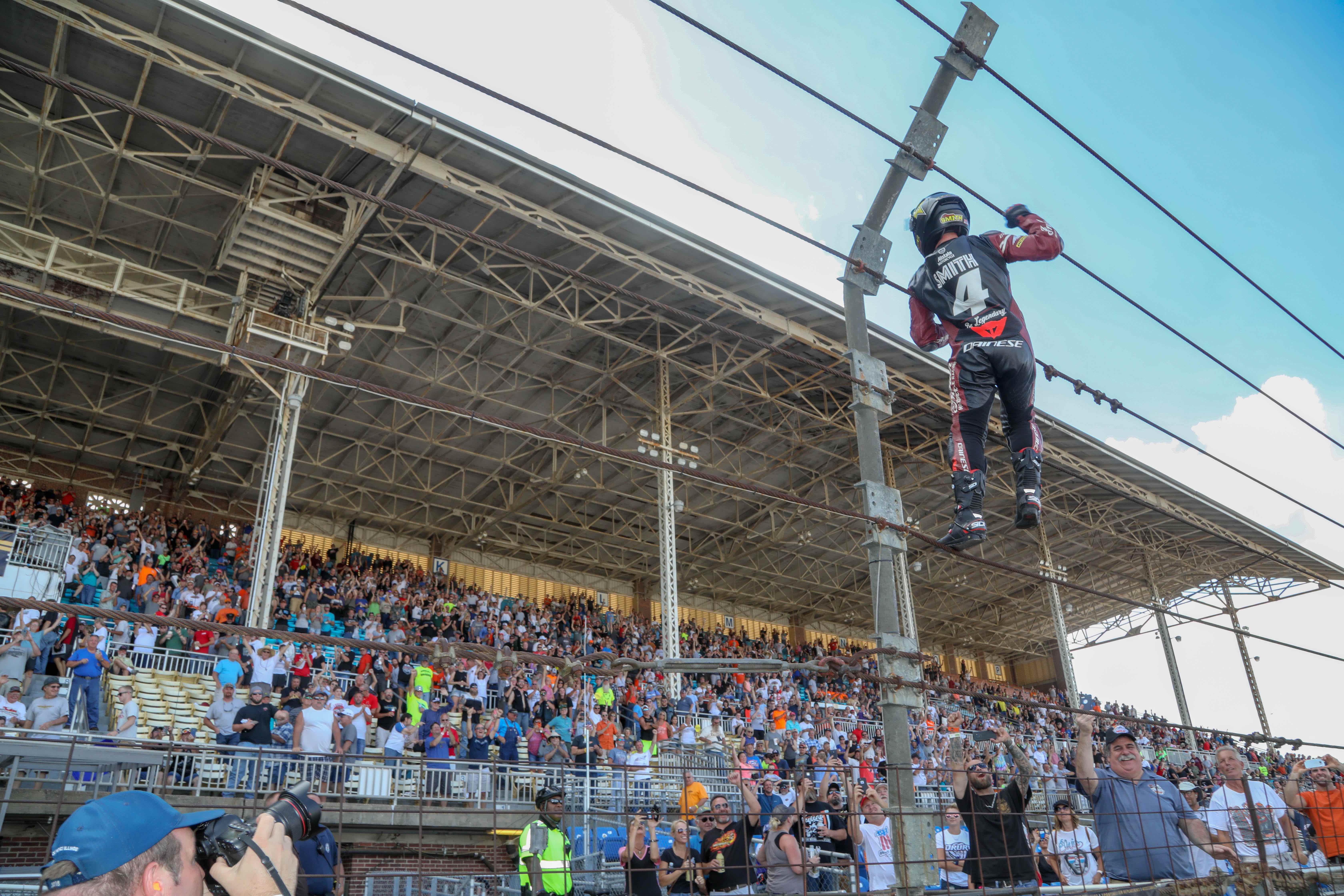 Mees, who lost by just 0.013 seconds to Smith, was gracious in defeat but had to be disappointed to not capture another win at the legendary venue in a season he’s dominated so thoroughly.

“That was a pretty classic Springfield mile,” Mees said afterward. “Honestly, my game plan was to lead it off of four. I felt like I could beat them to the line…but I couldn’t. We were so close. I wouldn’t have done anything differently, honestly. We came up a little short, but we got the main goal, the championship. My team worked so hard. It’s an honor, and I’m looking forward to the next three races.”

Third went to Springfield Mile I winner Jeffrey Carver Jr., who after an electrical gremlin nixed his chances in his Heat had to start from the back row in his Semi. It didn’t matter much, as he got to the front quickly and was barely beaten at the line by Semi winner Mees, which gave Carver Jr. a front row starting position for the Main.

“I bounced off the guard rail down here in [turn] one,” said Carver Jr. on the podium. “I saw Jared and Briar and Bryan do it all race long trying to ride low to get that traction where nobody else was getting down to….it was just a brawl. I’m so happy to be up here on the podium and I’m really happy to be able to put on a show for the fans.”

The fourth rider in that lead pack, which had gapped fifth place finisher Henry Wiles and the rest of the field by several seconds by the race’s mid-point, was Briar Bauman.

The second AFT Production Twins race of the year was in many ways a repeat of the first in May, with Michael Inderbitzin coming from the pack to run down early leaders Ben Lowe, Tristan Avery and Jordan Harris. It was a see-saw battle much like the AFT Twins race, with riders swapping spots seemingly every lap. But in the end Inderbitzin was simply too strong on the Weirbach Kawasaki for the others.

“That was a close race,” Inderbitzin said later, I didn’t know if I’d have anything for them, but I was able to draft a couple of guys. I didn’t really have a strategy; just get a good start and try to run with the guys up front. I knew I had a great motorcycle!”

For a thoroughly in-depth Springfield Mile II experience with flag-to-flag coverage of all three Main Events (AFT Twins, Production Twins and AFT Singles) enhanced by drone and onboard footage, be sure to catch the NBC Sports feature telecast of the Harley-Davidson Springfield Mile II and Springfield Short Track when it premieres on NBCSN on Saturday, September 22 at 2:30 pm ET (11:30 pm PT). Be sure to check your local listings, or for the complete broadcast schedule for AFT on NBCSN, please visit http://www.americanflattrack.com/events-nbcsn