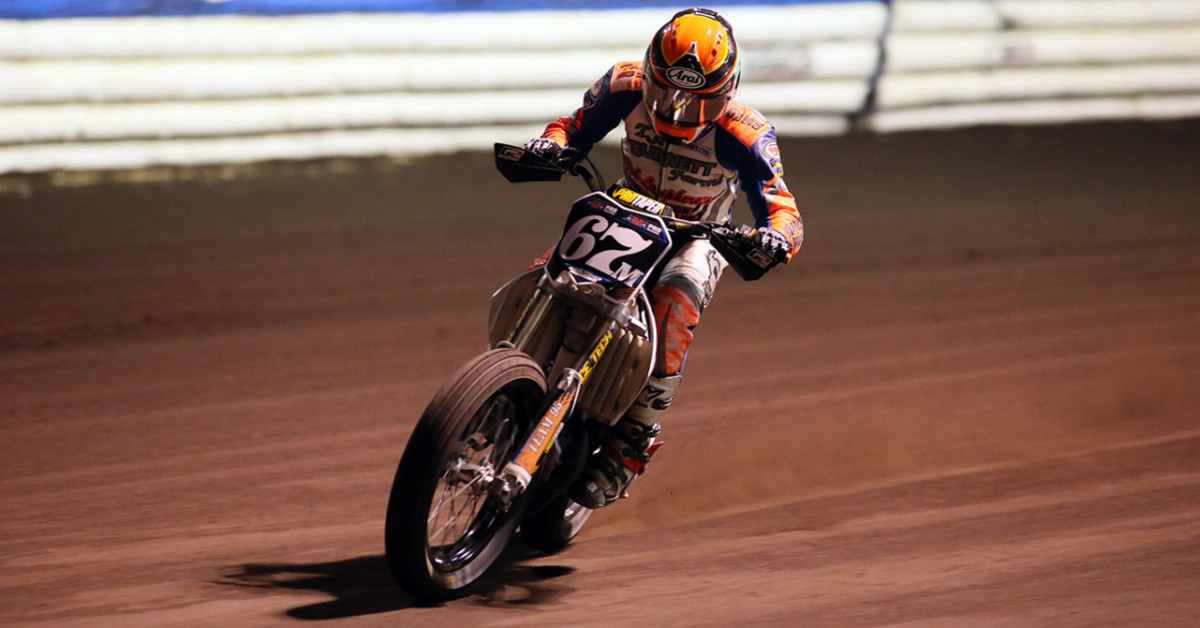 DAYTONA BEACH, Fla. (May 4, 2015) – Davis Fisher finished the 2014 AMA Pro Flat Track season with more momentum than any other rider in the series, as he closed out the final two GNC2 races with remarkable victories at Calistoga and Pomona. If not for a crash during the 2014 Indy Mile late in the season, which caused him to finish 16th in the race and miss the following two events, Fisher would have probably been crowned the 2014 GNC2 champion in just his first year competing at the professional level. Instead, Fisher lost to Kyle Johnson by a single point in the chase, 191-190, and the Warren, Ore. native has had to deal with the bittersweet taste all offseason.

Flash-forward to 2015, and Fisher is arguably the odds-on favorite to capture the GNC2 title in just his second season. After finishing in 13th in Round 1 at DAYTONA Flat Track, Fisher got back on the podium with a strong second place effort in Round 2 and sits fourth in points heading to Springfield, where he will pilot a Racing Unlimited Kawasaki EX650.

Fisher finished second in his only Springfield Mile attempt in 2014, as he was forced to miss the second running of the iconic event because of the injury he suffered at Indianapolis.

“I’m confident heading into Springfield,” said Fisher. “I wasn’t able to race there last fall because of the injury that I sustained at Indy, but I was able to get a solid second in my only race there a year ago. I’m hoping that I am able to build off that momentum and put myself in a position to win. I like the track a lot and I’m looking forward to moving on successfully with this season and avoiding injury.”

During the time between Daytona and Springfield, Fisher has been sharpening his skill set by training with 2013 Grand National Champion Brad Baker. Fisher says working with the former No. 1 plate holder has helped him tremendously in many different ways.

“I’ve rode with Brad (Baker) several times in the last few weeks,” said Fisher. “We have competed against each other on motorcycles as well as ridden our bicycles through trails in our home state of Washington. The biggest thing I’ve taken away from training with him is learning how to be more consistent and how important consistency is in racing. He’s exceptionally smooth with everything he does on the track and he doesn’t make mistakes lap-after-lap. That’s my goal as well. It’s been a great experience chasing each other back and forth and I think it’s really going to pay off during this season.”

Look for Fisher, riding the No. 67M Racing Unlimited leathers in less than three weeks when the series takes to the track at Springfield for the first of two races at the Illinois State Fairgrounds in 2015. There’s no denying that Fisher is one of the up-and-coming stars of the sport, and learning from one of the best there is in the game, Baker, is just another reason why Fisher will be one of toughest competitors on the track this year and for many years to come in AMA Pro Flat Track.

Every round of the 2015 AMA Pro Flat Track season can be seen live, in high definition and free of charge online at www.FansChoice.tv. For tickets and more information regarding the Springfield Mile, please call 217-753-8866.