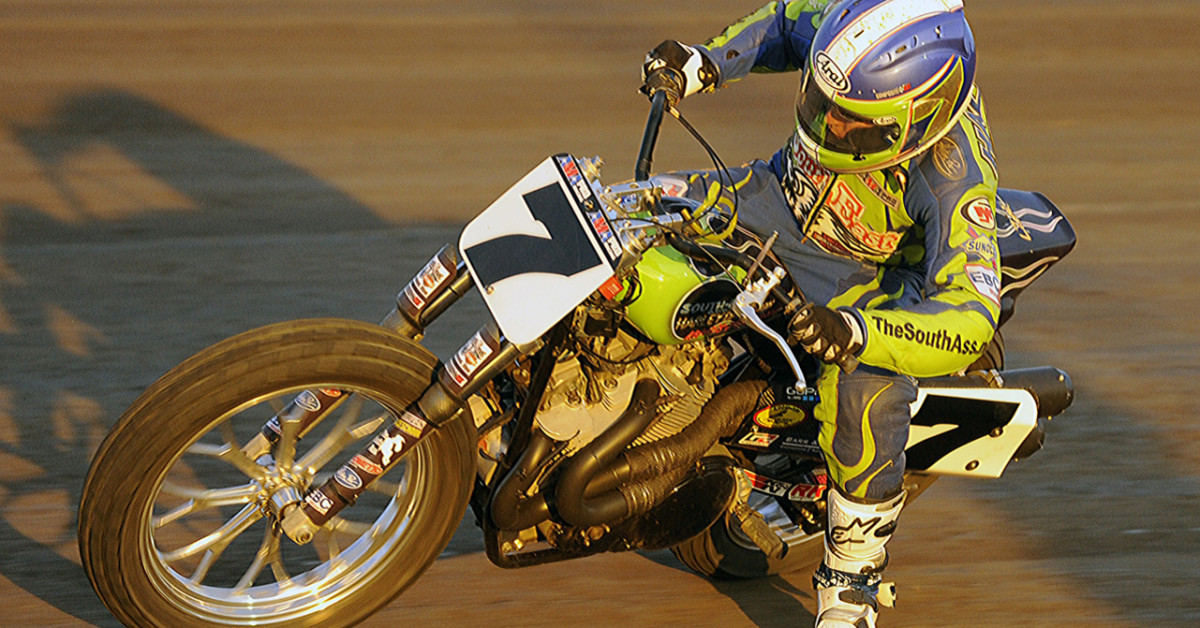 DAYTONA BEACH, Fla. (May 14, 2013) - For the first time in 2013, the fire breathing twin cylinder beasts of the AMA Pro Flat Track presented by J&P Cycles Championship made their way onto the race track. The Championship visited the brand new 99 Speedway located in Stockton, California at the San Joaquin County Fairgrounds. The new venue proved to be very racy as multiple lines afforded three and four wide racing all night long.

“They had just watered the track which was great to see,” said the South East Harley-Davidson backed Halbert. “They took some initiative to prep the track before we went out there for the main event so we could put on a better show. I bumped into him (Baker) one time and I was right beside him a couple times coming down the front straightaway. I was kind of going off the edge of the track and spinning my tire. I was fighting for that last piece of real estate. I think it made a great show for the fans to show that kind of aggression for the lead.”

“It feels good. You can’t complain about second as it’s always a good finish,” said Baker (Dodge Brothers Racing). “It has been pretty consistent with me right now. I’ve had three races and had three seconds. It is just a trend of leading about 20 laps and getting it taken away from me with about five to go.”

“Sammy rode an awesome race. We had a good battle the whole time,” added Baker. “We were close at the beginning. I felt myself gap him a little bit and I started feeling him there a little bit at the end.”

After leading the first two laps, Halbert gave way to Baker, but continued to challenge as they raced back and forth. “Brad came by me and I know he was hungry for a win. I thought to myself, ‘Let’s see if I can steal another one from him.’ He was right there and I didn’t want to be the guy who gave him that first win so I had to dig deep,” said Halbert. “I was getting tired and he was starting to pull away and I started thinking about that big Harley-Davidson contingency and I was like, ‘I want that money. Let’s go!’”

“I got on the gas, found a line on the outside there in turn three and four and made it happen. It took me awhile to get around Brad,” said Halbert.

“He studied me the whole time and tested some things. He found something there on the last five laps and made it happen,” said Baker. “It’s pretty cool. He got to take it from me. It’s just a Washington deal. I think it is cool that we get to race like that. I am hoping that when I finally get that first win that maybe Sammy will be there battling with me. I’ve had three seconds and am doing well in the points. It is a big goal of mine to stay consistent.”

Halbert was able to finally secure the lead for good on lap twenty and pulled to nearly a one second lead on the last lap. That was the largest lead of the race. The win marked Halbert’s return to racing action for the first time since suffering a knee injury over the winter that required surgery. “

“That was a pretty good way to come back to racing. It’s been a while,” said Halbert. “I haven’t ridden a bike much. I’ve just been training and doing a lot of exercising. I’ve been really focused lately and working hard. I think it’s paying off. I got the holeshot, which was awesome.”

Wiles was able to nail down the last podium spot on lap 22. “It was just that there were so many things that were kind of new. It was a bike that had never even hit the track before today,” said Wiles. “That is how new everything was. To end up finishing third was a great night. You can’t shake a stick at that. I think we might have been able to run the pace of those guys up front. I didn’t even get in front of Jake until the five to go. Fourth even would have been a good night for us. Getting on the box makes it that much more for the team and everybody involved.”

Johnson was able to hold on to fourth over Pearson, while AMA Pro Racing Grand National point leader Brandon Robinson (TJ Burnett/USC Kawasaki) clawed his way up to sixth. Harley-Davidson Motor Company’s Kenny Coolbeth came all the way from last to a finish in a solid seventh place on his Harley-Davidson.

The New 99 Speedway (a recently constructed 3/8 mile clay oval) sits inside the big mile oval at the San Joaquin County Fairgrounds. Because the track uses no part of the mile, there are virtually no barriers around the racing surface. This played a big part in turning what potentially would have been a catastrophe into simply a very bad night of racing for defending Grand National Champion Jared Mees (Rogers Racing/Harley-Davidson) when he slid off the groove early on. “I got an ok start then I was coming into turn three and Wiles ran around on the outside,” said Mees. “He got a little bit of a bike length on me and right as I was coming up underneath him, he spun it sideways bad, and when it came back in line I was right there. It was almost the hardest high side. I don’t know how I didn’t crash. If there would have been a wall there I would have been done. I went out on the mile straightaway and came back in. I was pretty shaken up about it really. That was really like having my life flash before my eyes kind of thing. It was really disappointing because we really felt like we were on a good roll. You just have pick yourself up and keep going forward.”

Brandon Robinson continues to lead the AMA Pro Flat Track presented by J&P Cycles Championship points race, but Brad Baker is just seven back with Henry Wiles and Jake Johnson within ten points of the lead.

Maguire’s smooth ride propelled him to his first win in the Pro Singles class. “I won my first AMA Pro Singles race. It feels pretty good,” said Maguire. “It was definitely tough getting through the field but we ended up changing gears and it helped a lot. It feels incredible to pull off my first ever victory here in Stockton. I need to thank my family and all of my sponsors, without them I would never have the opportunity to experience something like this.”

Kyle Johnson backed up his Daytona win with another podium appearance, passing Spencer Jr. on lap 11 and leading the large swarm to the finish line. Johnson and Maguire are co-leaders in the AMA Pro J&P Cycles Pro Singles point standings.