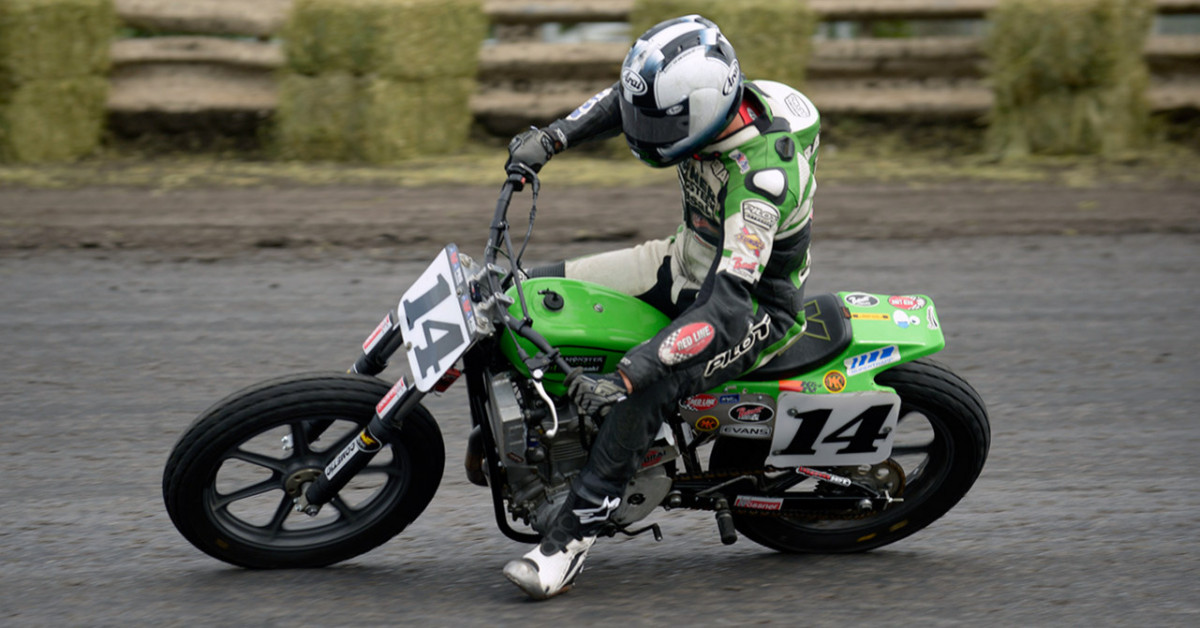 Jake Johnson, Briar Bauman to compete for Hart Racing in 2015

DAYTONA BEACH, Fla. (Dec. 3, 2014) – The AMA Pro Flat Track scene just got a little bit more competitive, as two of the premier riders in the elite GNC1 class have agreed to join forces and compete for Hart Racing in 2015.

Jake Johnson, a former Grand National Champion, and Briar Bauman will take to the track next season aboard high-powered Kawasaki motorcycles on Half-Mile and Mile circuits.

Hart Racing is headed up by team owner James Hart, who will be flanked by expert Kawasaki developer Dan Thompson of Hot-Shot Motorworks and Hank Scott, winner of 17 Grand National main events and an AMA Hall of Fame member.

“I think it’s going to be a lot of fun being next to Jake (Johnson) in the paddock,” said Bauman. “Also, I’ve ridden a Kawasaki for the last two years and I feel very comfortable on one. This year there will be different type of frames but it will be the same motor. All in all, I know how the bike works and we should start out pretty strong at Springfield for our first twins race.”

Bauman got off to a flawless start in 2014, winning the first race of the season at Daytona. However, that turned out to be the Salinas, Calif., native’s lone victory of the year, as he went on to finish 11th in the overall Grand National Championship point standings. But, at just 19 years old, Bauman clearly has a bright future ahead of him, and he has big aspirations for the upcoming season.

“My main focus for 2015 is to remain consistently in the championship hunt throughout the year,” said Bauman. “I want to earn some podiums and I want to end up toward the top five in overall points at the season’s conclusion. I’m confident that I have the right equipment and the right people in place to help make that happen but I realize it’s on me to perform, and I’m excited for the challenge.”

Unlike Bauman, who possesses raw talent and the potential to be a superstar in the series, Johnson is a proven veteran who knows precisely what it takes to win championships.

“It should be a really good year,” said Johnson. “This will be the first time competing with any of these guys and I’m really looking forward to it. Briar and I did some testing a few weeks ago at Oglethorpe Speedway in Georgia and the bikes everyone seemed to be working really well together. I felt great on the Kawasaki and I thought it went really well. The goal for me this year is to just win races and go for another championship and I think Hart Racing gives me a good opportunity to do that.”

A back-to-back Grand National Champion in 2010 and 2011, Johnson got back on track last season by finishing third in the overall points, and, though he didn’t record a single victory, his eight podium appearances are what set the table for his top-three finish.

One of Johnson’s claim to fames in recent years is that he’s proven to be able to ride any brand of motorcycle with tremendous success. Out of his three races mounted aboard a Kawasaki last season, the Coatesville, Pa. resident rode to an impressive second place finish at the Sacramento Mile, third place at the Virginia Mega Mile, and sixth at the second Springfield Mile.

Both Bauman and Johnson’s track records speak for themselves. Bauman, an AMA Horizon Award recipient as an amateur, won three main events in his debut season in GNC2 and also captured the Saddlemen Rookie of the Year award in 2011. Johnson’s two championships and several top five overall finishes, combined with his tenacious riding style have made him a household name in the paddock. The hope is, mixing great talent with great machines and a solid supporting cast, great results are bound to follow at Hart Racing.