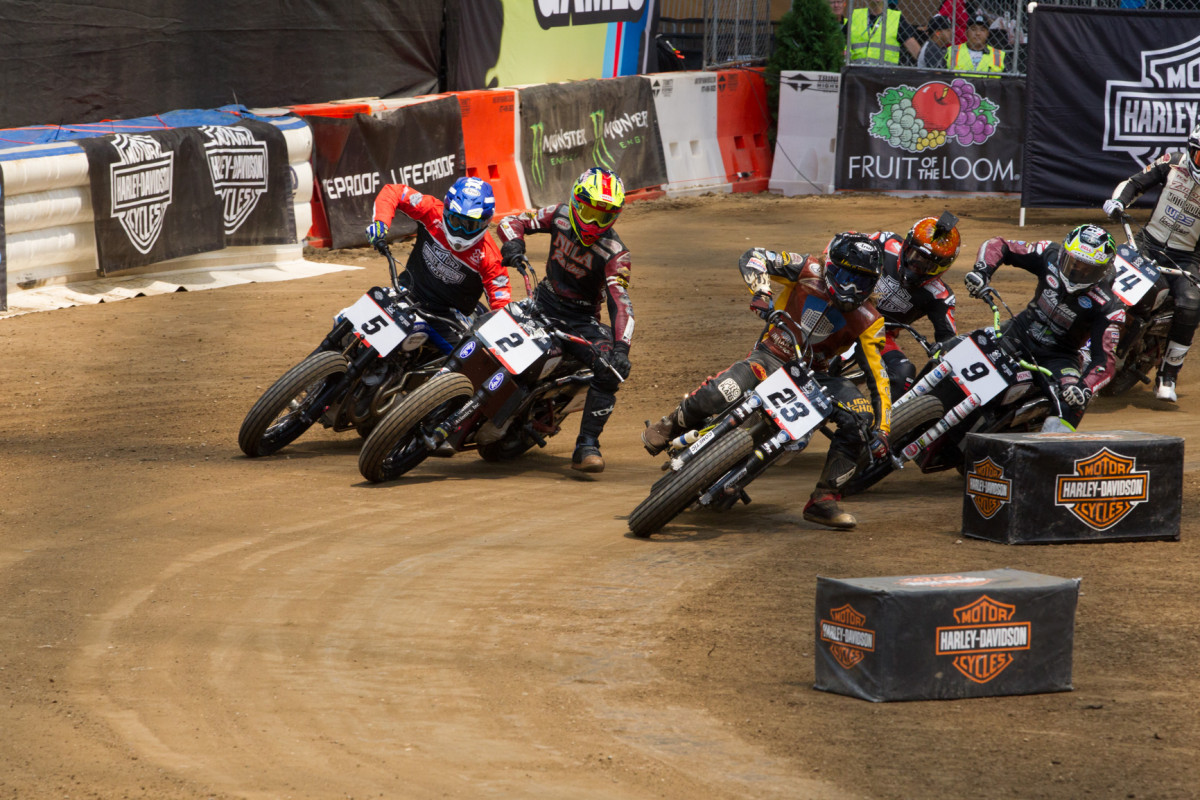 MINNEAPOLIS, Minn. (July 22, 2018) – When it rains it pours, they say, and for Jared Mees the wins just keep pouring in. The latest in a now-formidable collection of victories this season – nine of eleven so far in 2018 American Flat Track competition – came today in Harley-Davidson Flat Track Racing at X Games Minneapolis.

Mees (No. 9 Indian Motorcycle Rogers Racing SDI Scout FTR750) was nearly perfect on the short track built inside US Bank Stadium, winning his Heat, Semi and Main in dominating fashion. He got good starts, grabbed his leads early and rode fast and mistake-free to secure his second X Games gold medal – his first coming in 2016. 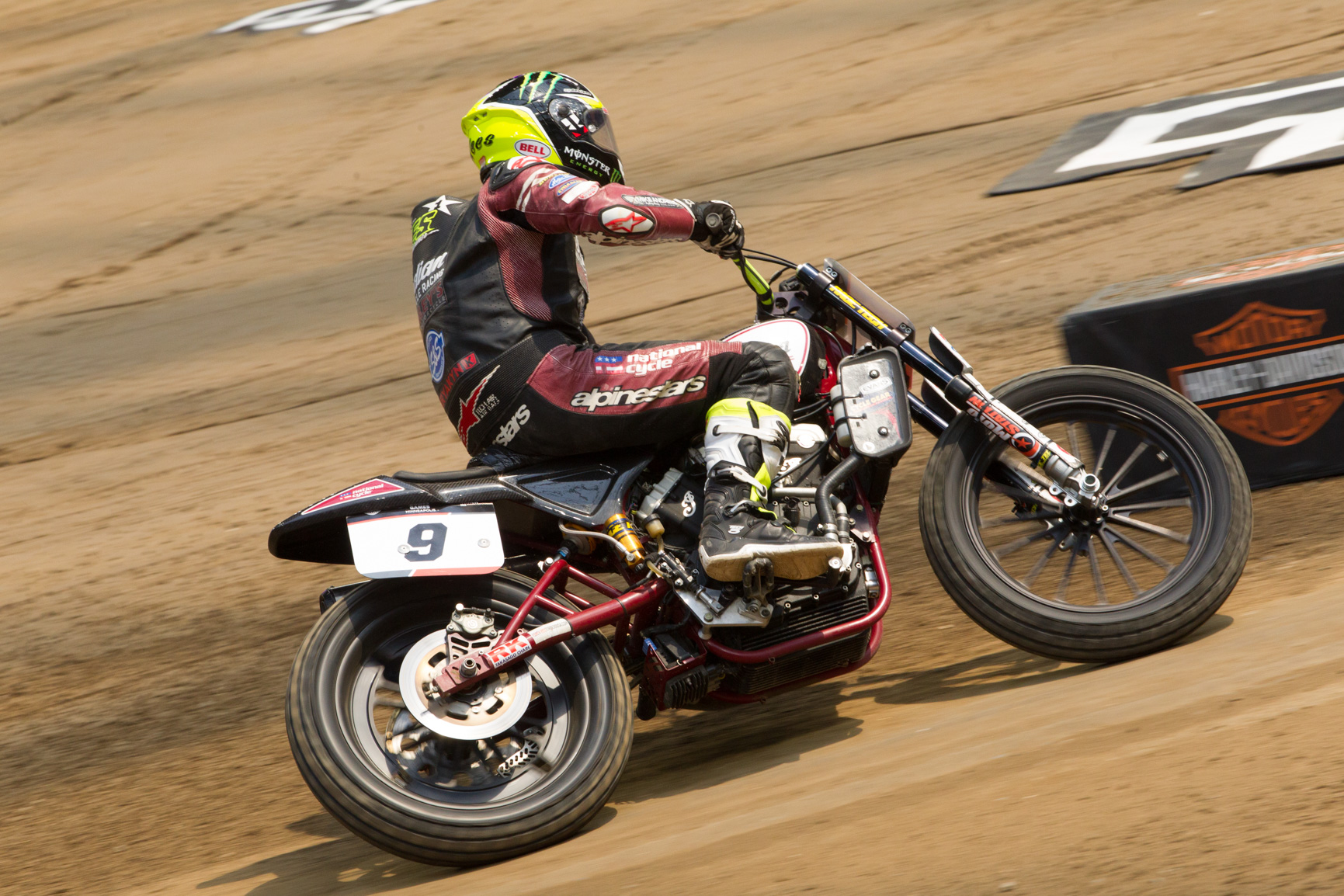 Carver took the holeshot at the start and looked to have the speed to stay ahead of Mees on the egg-shaped, eighth-mile indoor track. But Carver ran wide when Mees pressured him up the inside on lap five, and as he looked over his shoulder and tried to regain the line, Mees, Bauman and Halbert passed him – and Carver Jr. found himself fourth, and floundering. 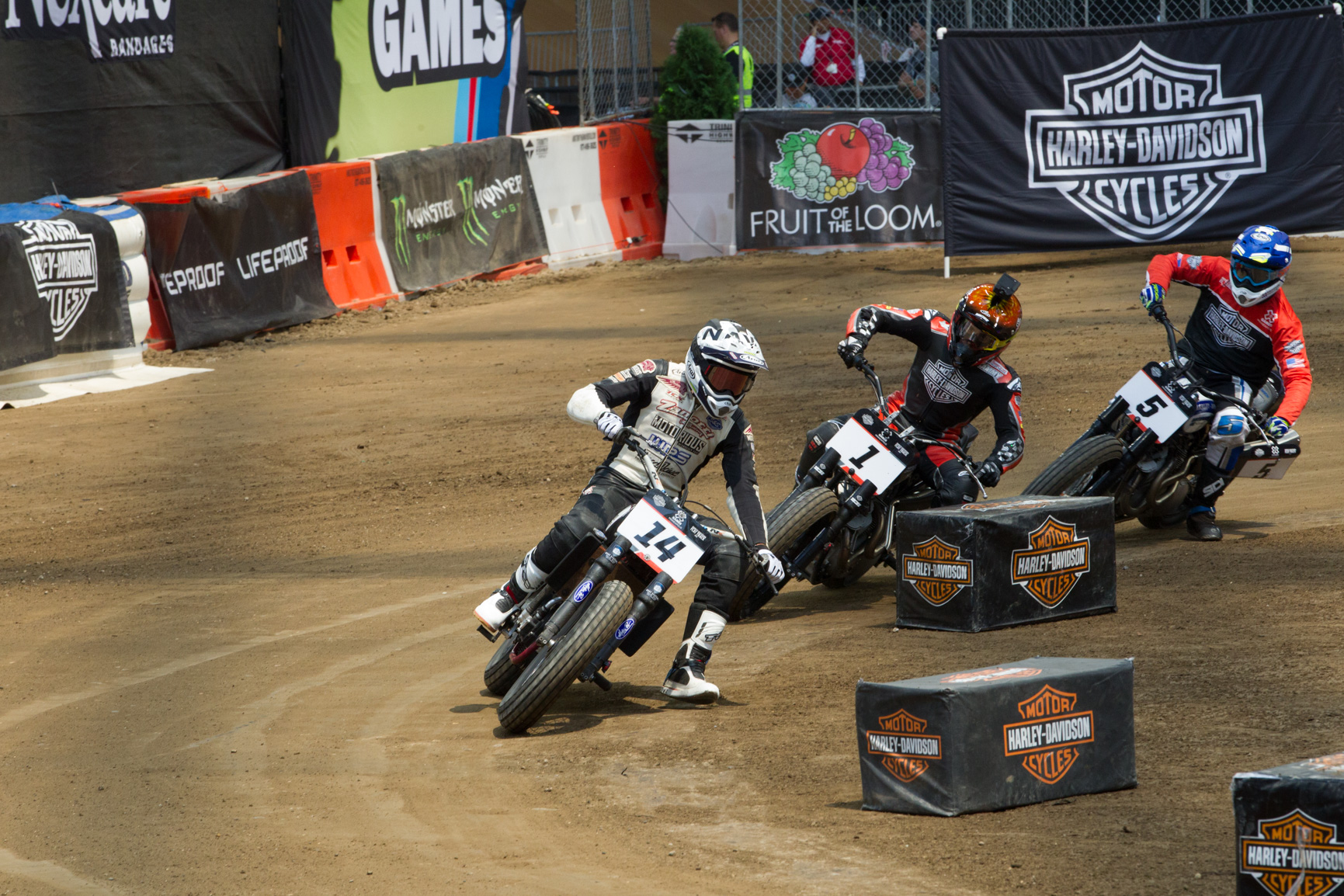 Briar Bauman (14) freight-trained with Sammy Halbert (1) and Jake Johnson (5) in the latter part of the race, and pushed aside a last-corner inside move by Slammin' Sammy to take second behind Mees.

From then on it was another stellar Jared Mees performance – leading the remainder of the 15-lap Main solidly while keeping an eye on Bauman behind him in second place. Bauman, who recovered quickly from a last-place start, put in a mid-race challenge, sticking right on Mees’ rear Dunlop and looking like he might pressure the reigning AFT Twins presented by Vance & Hines champion – and close friend – into a mistake. But it wasn’t to be. Mees rode without error and slowly pulled away to a comfortable margin at the end.

“This is such a unique race, and it’s such an honor to be invited back,” Mees said after the win. “The Indian Scout FTR has been running great all year for me; it just feels good… it’s awesome to get a gold medal! This little indoor short track…this is what I grew up on. I mean, this should be my specialty. We were good all day, I was able to bump Jeffrey [Carver Jr.] out of the way clean and get going. It was great. It’s an honor to be here and I’m looking forward to coming back.” 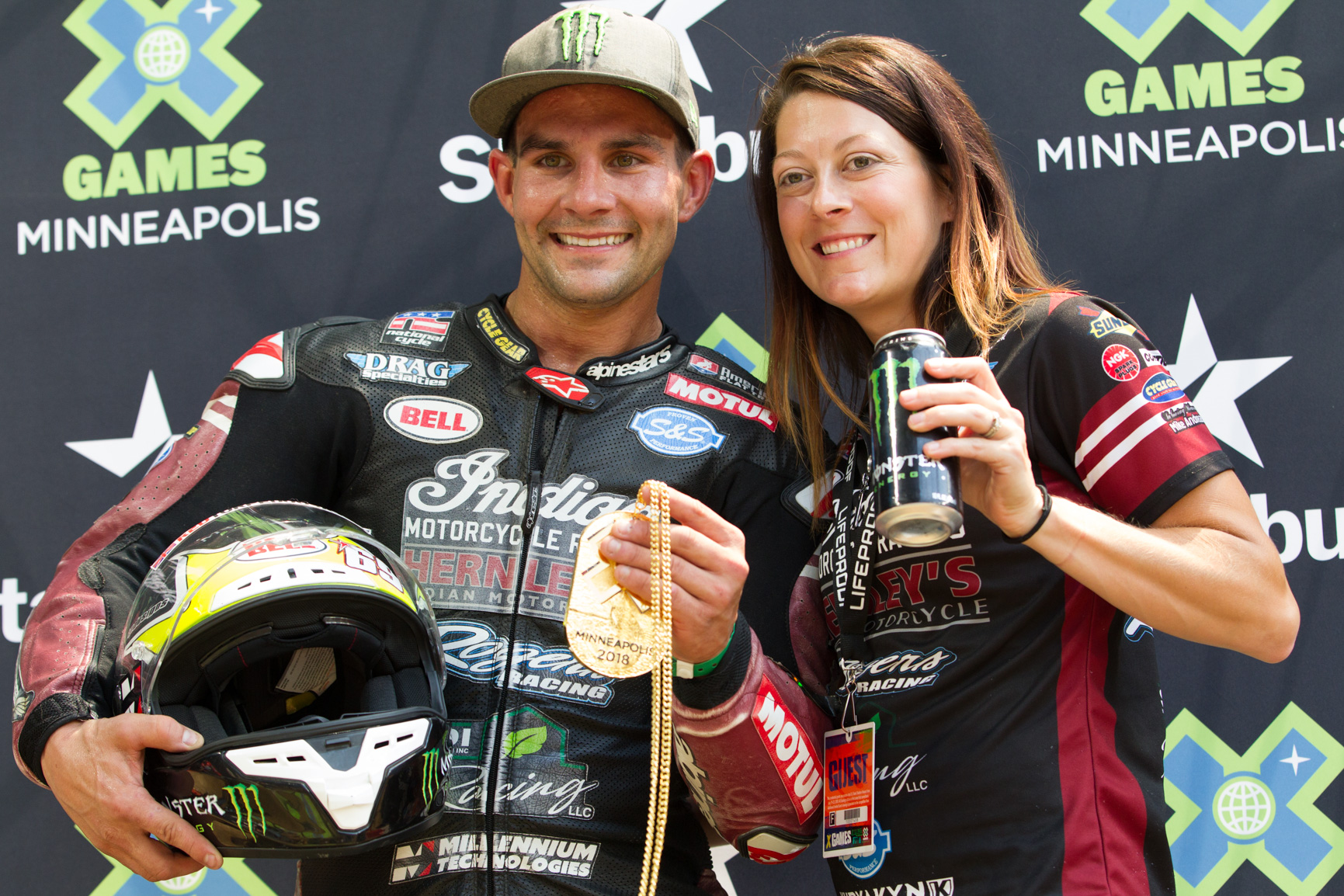 Mees and wife Nichole celebrate on the podium. The X Games gold was Mees's second; he won one in 2016.

Factory Harley-Davidson pilot Sammy Halbert ran strong behind Bauman on the Vance & Hines XR750, and made a dramatic, last-lap/last-corner attempt to steal the runner-up spot with a typically aggressive ‘Slammin’ Sammy’ move. But Bauman didn’t give Halbert much room, and the Washington native lost the front in the loose dirt and went down, letting Johnson by for third, followed by Carver Jr. and Coolbeth Jr. Halbert came home sixth.

A revitalized and Indian-mounted Bauman finished second, 1.3 seconds behind Mees, and seemed comfortable on both the bike and the slick, tricky circuit.

Indian Motorcycle factory rider Brad Baker was involved in a crash during Sunday's practice session and was unable to participate in the event. 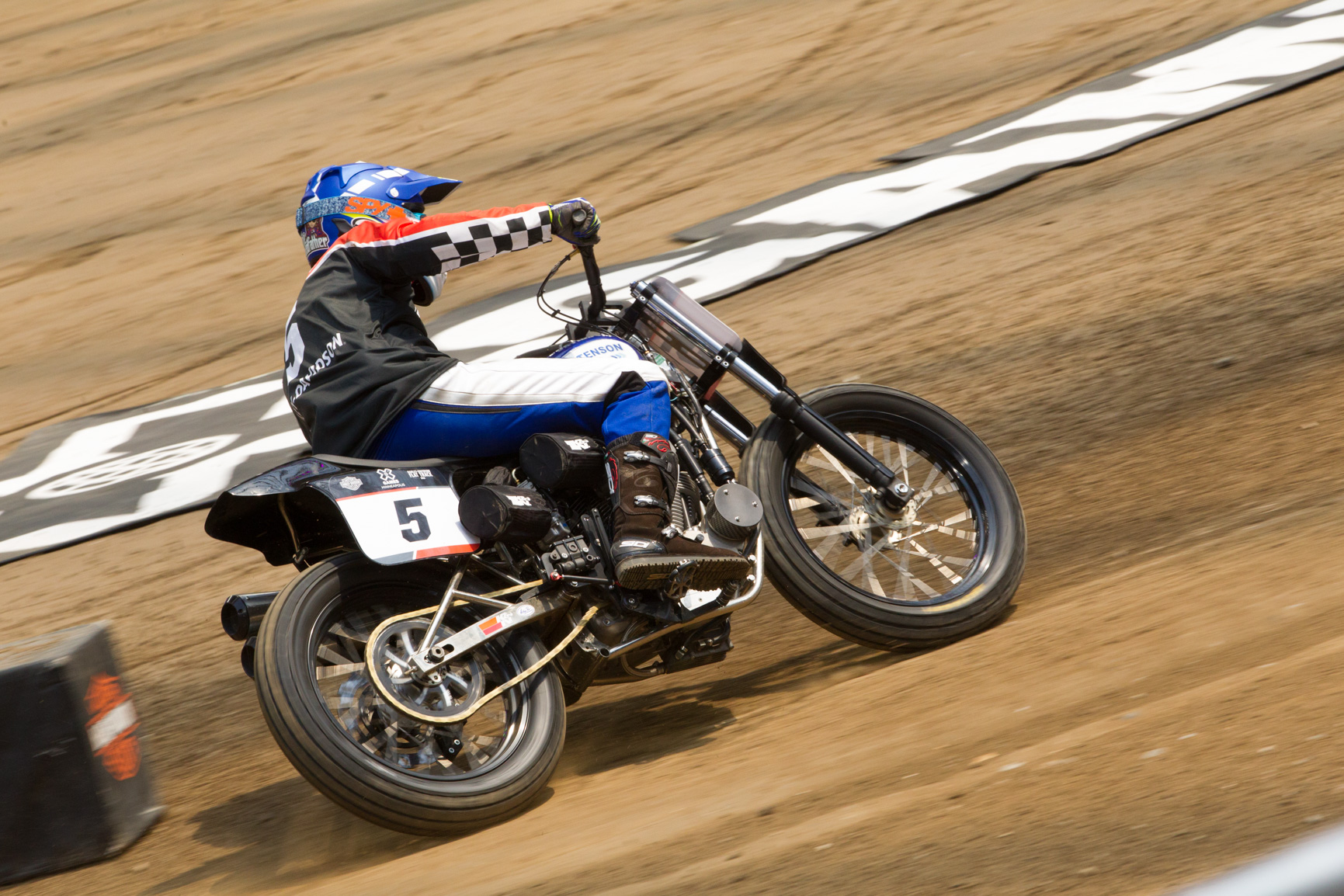 Jake Johnson, riding an XR750 out of the Estenson Racing stable, ran fast and grabbed a well-earned third for the afternoon.

Next up for the stars of American Flat Track is the Buffalo Chip TT presented by Indian Motorcycle on August 5th and Harley-Davidson Black Hills Half-Mile presented by Law Tigers Motorcycle Lawyers on August 7th. Tickets for both events are available at the links below, and if you can’t make the races you can tune in to live, flag to flag coverage of each event on FansChoice.tv starting at 2:00 pm MT (4:00 pm ET) for the Buffalo Chip and at 3:00 pm MT (5:00 pm ET) for Black Hills.

Lead Photo: Jeffrey Carver Jr. (23) pulled the holeshot in the Main but relinquished the lead a few laps later to Jared Mees (9). Briar Bauman (14) moved to second pretty quickly, while Sammy Halbert (hidden) made things interesting in the last corner on the final lap when he tried to tuck under BB14 for second and crashed. Jake Johnson (5) finished 3rd, with Carver Jr. 4th, Kenny Coolbeth Jr. 5th and Halbert 6th. 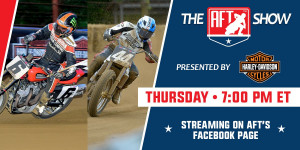 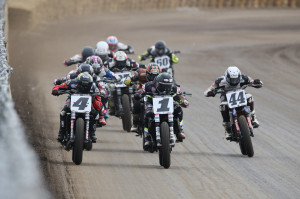