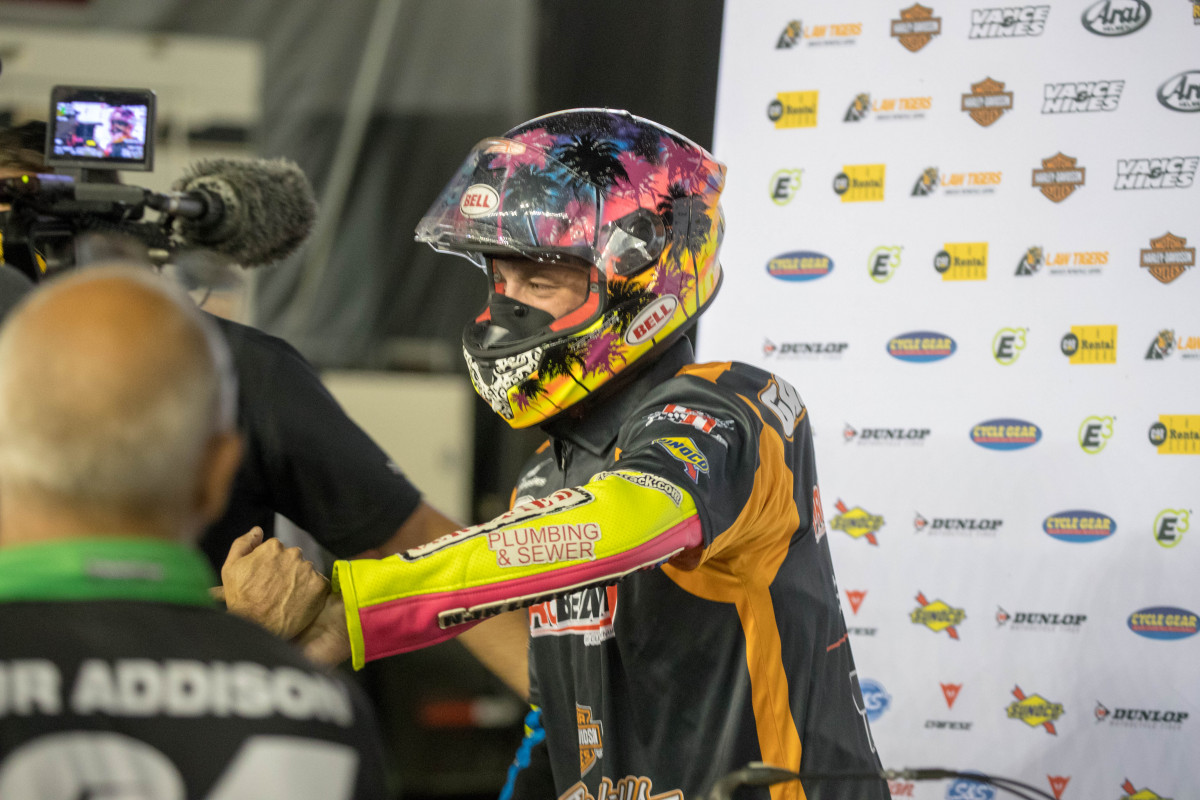 More Than a Comeback

Just days before the start of the 2019 American Flat Track season, it was confirmed that the much-heralded Dalton Gauthier would at last make his racing return following nearly two full seasons away from the sport.

A random drug test that erased a third-consecutive victory to start the 2017 season led to a suspension that would, over time, transform into something more closely resembling a racing sabbatical bordering on self-imposed exile.

Widely viewed as among the most naturally gifted riders to surface in years -- decades even -- there was little chance AFT fans would soon forget about the 20-year-old. Rust or not, expectations remained high in his return.

Gauthier ignored any outside expectations. His only goal was to have fun, no pressure.

Now with the season more than three-quarters complete, Gauthier has exceeded even the loftiest expectations. He leads the Roof Systems AFT Singles presented by Russ Brown Motorcycle Attorneys championship while also ranking inside the top five in the AFT Production Twins standings despite having participated in just four of the category’s six rounds. 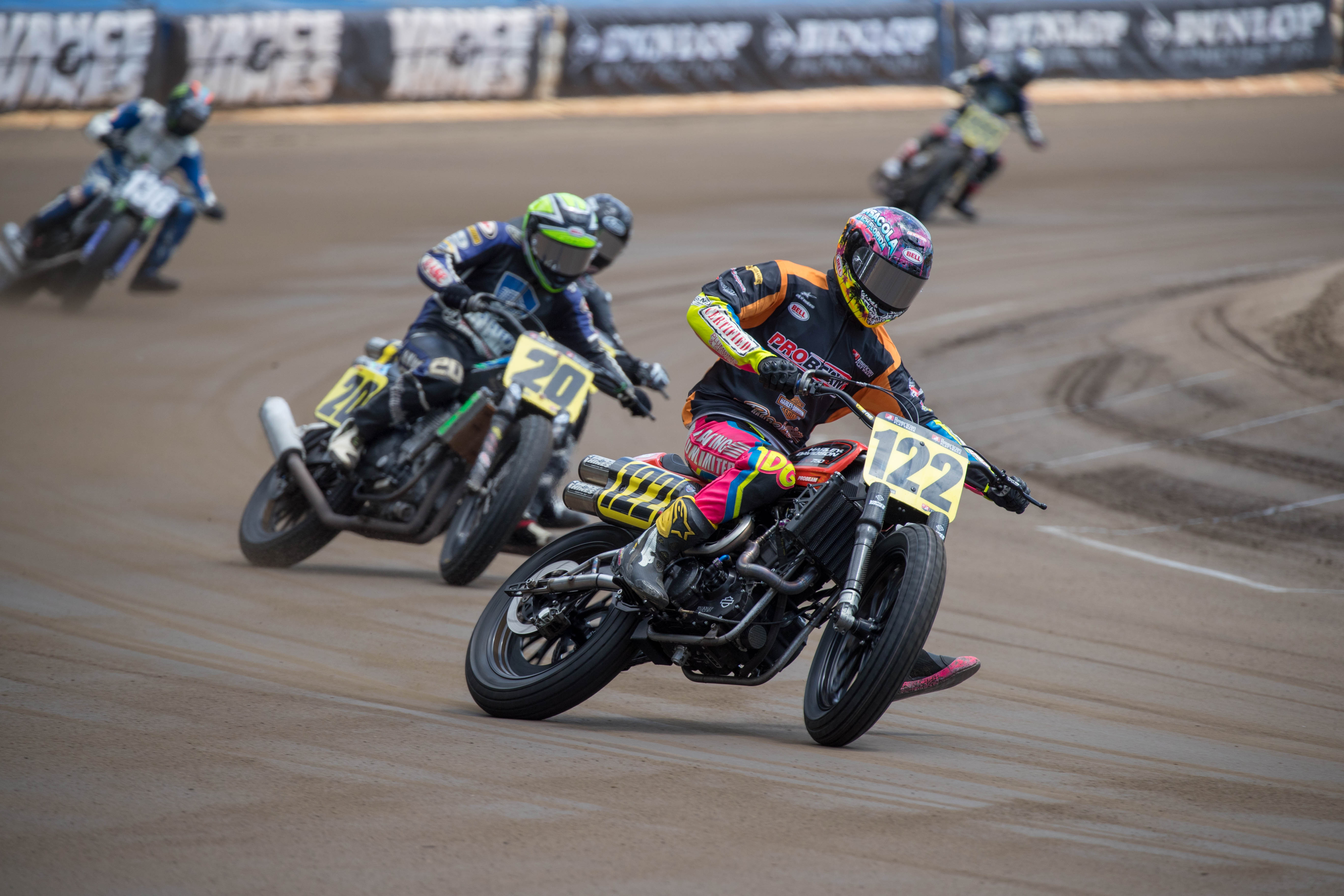 Still, the primary goal remains unchanged. Expanded no doubt, but still the same at its core.

As Gauthier sees it, his care-free approach to the season has worked so far, so there’s no sense in changing it now as he rolls into Friday night’s Springfield Short Track on his No. 122 D&D Cycles/Gobert Smash Husqvarna FC450.

“I'm not changing anything too crazy,” Gauthier said. “I'm approaching it the same as I have all season -- just have fun. Honestly, this is the most fun I've ever had racing motorcycles. So I'm just staying cool.

“I feel like the pressure is all on (Bromley), honestly. I have no pressure because I'm just coming back for my first year… I never would have thought at the beginning of the season I'd be in this championship chase like I am. I'm just excited by how good I've done this year, and I'm ready to win a championship for sure.

“But It's not the end of the world if I don't win the championship -- that's how I look at it. I do want to win it, but you can’t be too mad about losing either. That's why I'm just trying to have fun and do my own thing.”

That sort of talk is not Gauthier mentally preparing for failure or signs of any cracks in his breezy confidence. He’ll tell anyone that asks that he believes he’s the odds-on favorite to win the championship.

“I think I've got the upperhand on Dan, honestly, but we'll see. I think I've can beat him on any given day -- it's all the pieces that have to come together. If everything comes my way, I think we can win it for sure.”

Bromley took last year’s title in a display of outright domination. He finished 65 points ahead of his nearest adversary on the strength of 13 podiums highlighted by four wins. This year’s title defense has been defined by a quieter form of relentless consistency, lacking a win, but instead built on seven podiums and 11 top-fives.

Gauthier not only boasts just as many podiums as his rival, he also has two more wins and four more top-twos. However, the points are counterbalanced on the other end. A DNF while running in contention for the Black Hills HM victory and an inability to even qualify for the semis at the Springfield TT after twice jumping the start in his heat have cost him dearly. 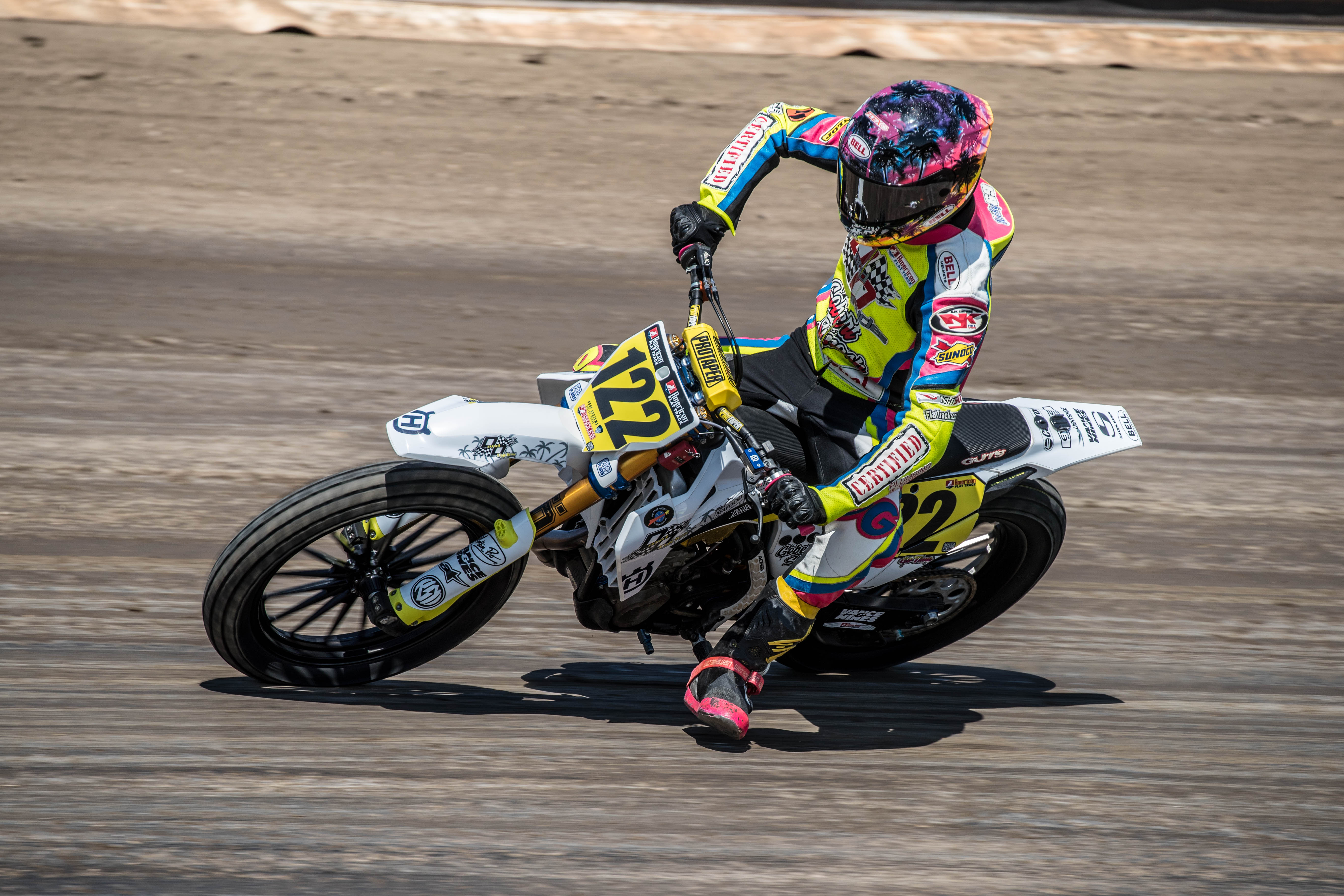 Meanwhile, the steady Bromley hasn’t finished outside the top ten on his Red Bull KTM Factory Racing KTM 450 SX-F all year. Combined, those contrasting realities have reduced this championship battle into a four-race shootout.

Gauthier said, “I can't make any more mistakes, like jumping the start and stuff. I'm just going to have to be smart and patient and be aware of my surroundings. I just need to stay consistent -- I want to be there until the end… not lose any more points. Even if I'm down 5 or 10 points going into the last race, we might be able to pull something out, but we don't want to just give it away.

“We're going to try to win the Springfield Short Track, and I think we've got a good shot at winning Williams Grove too. At the last two Miles, we're just going to have to beat Dan, I think, and try to stay as close to Mikey as I can. I've been training my butt off all week, so I'm looking forward to it, honestly.”

20-year-old Gauthier is wise to acknowledge the presence of RMR Honda ace Mikey Rush in third. He’s just 14 points back with two wins of his own, including when Rush beat ST ace Gauthier at the New York Short Track earlier this season. Even more crucially, Rush finished first and second at the year’s two Miles to date.

“I'm not counting (Rush) out. He's got a really fast bike and the last two races on the schedule are Miles. My plan is to beat him at Springfield and Williams Grove so I can get more of a gap. I don’t want it to come down to the last two races and have him win both and then take the championship away from Dan and me both.”

Gauthier can project something of a smirking, almost-cocksure, brand of charisma when the spotlight is shining down on him. Paired with his mammoth natural ability and vast potential, it comes across as natural and earned rather than off-putting.

However, he rarely seeks out that spotlight. He’s a private person (“I stick to myself and do my own training and ride by myself back home. I just do my own thing...”), who keeps his inner circle tight, with D&D Cycles’ Rob Mclendon serving as his trainer, tuner, trackside council, and sounding board.

As quiet as Gauthier may be, his talent speaks volumes. The first time he rode D&D Cycles’ KTM 450 SX-F after nearly two years away from AFT racing was on the day of the ‘19 season opener. He promptly finished second in that night’s Main Event.

The next time out in Atlanta, he did it again on a D&D Cycles Honda CRF450R -- only there he won. 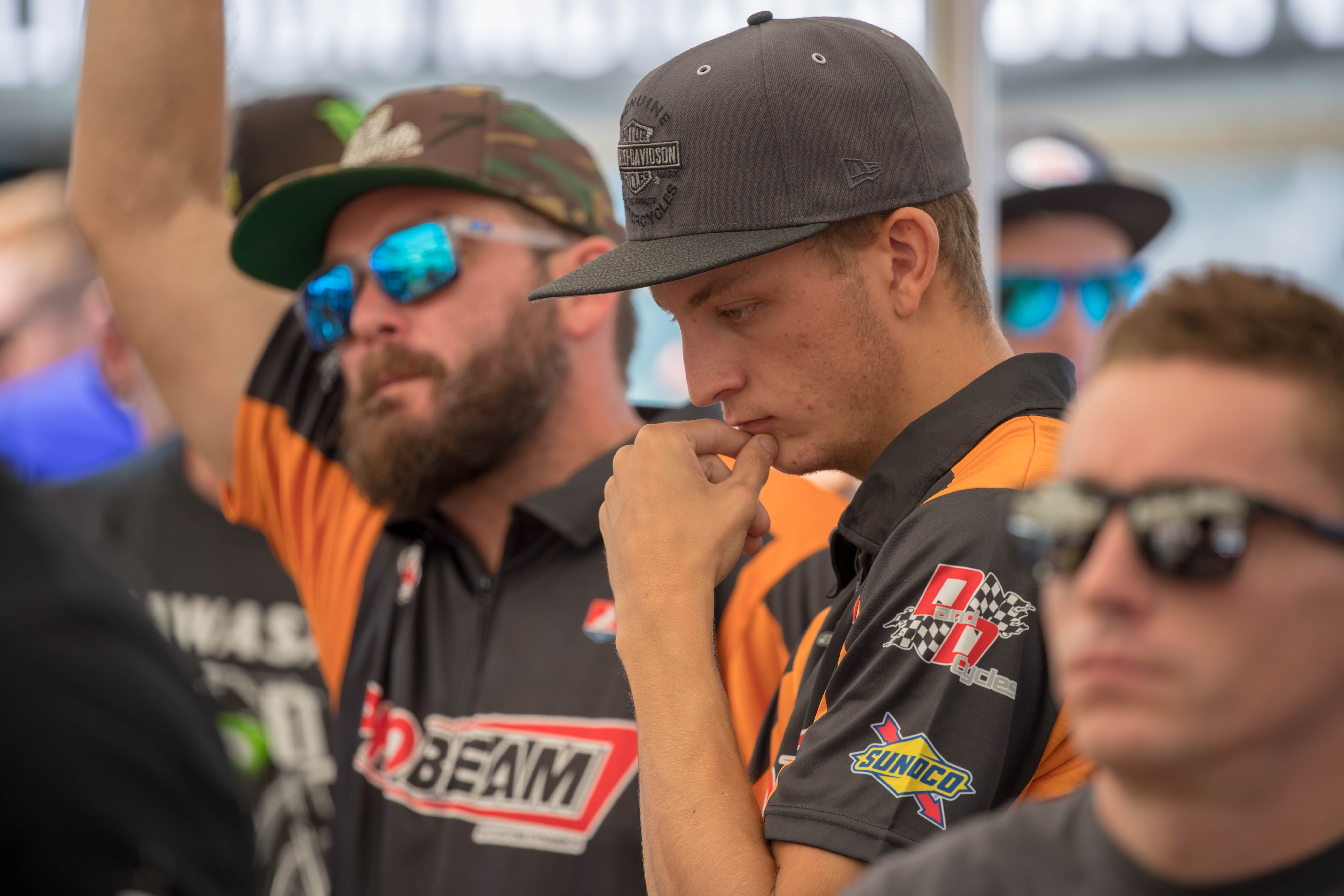 The following race in Texas, he swapped bikes again, jumping on a D&D Cycles Husqvarna FC450, which he rode to another top-five (and has since piloted to a win and five combined podiums).

This year’s display of versatility is only the most recent evidence of his ability to immediately tame any machine, adding to a reputation most famously built at the 2016 Arizona Mile, where he came from the back row to became the first and only rider to in American Flat Track history to win on a BMW.

“I think I can adapt really quickly to any bike,” Gauthier said. “I'm pretty good at figuring out set-up and stuff. I know what I want. By the time the Main comes around, Rob and I can usually figure out what we need -- what the bike is doing and what direction to go with the set-up.”

So it only made sense that the Black Hills Harley-Davidson squad gave Gauthier a call and offered him a chance to ride one of its developing XG750Rs for the remainder of the AFT Production Twins season.

“That was awesome -- riding a Harley and making history. To be the first to win on the XG is pretty cool, and I think the bike is really good honestly. I gel with it pretty well, as you can already see after only two races.

“I think the Harley is just going to get better. They really have their stuff together now. The bikes are really good and just getting better. I think by the time comes next year, the Indians are going to have a fight on their hands. 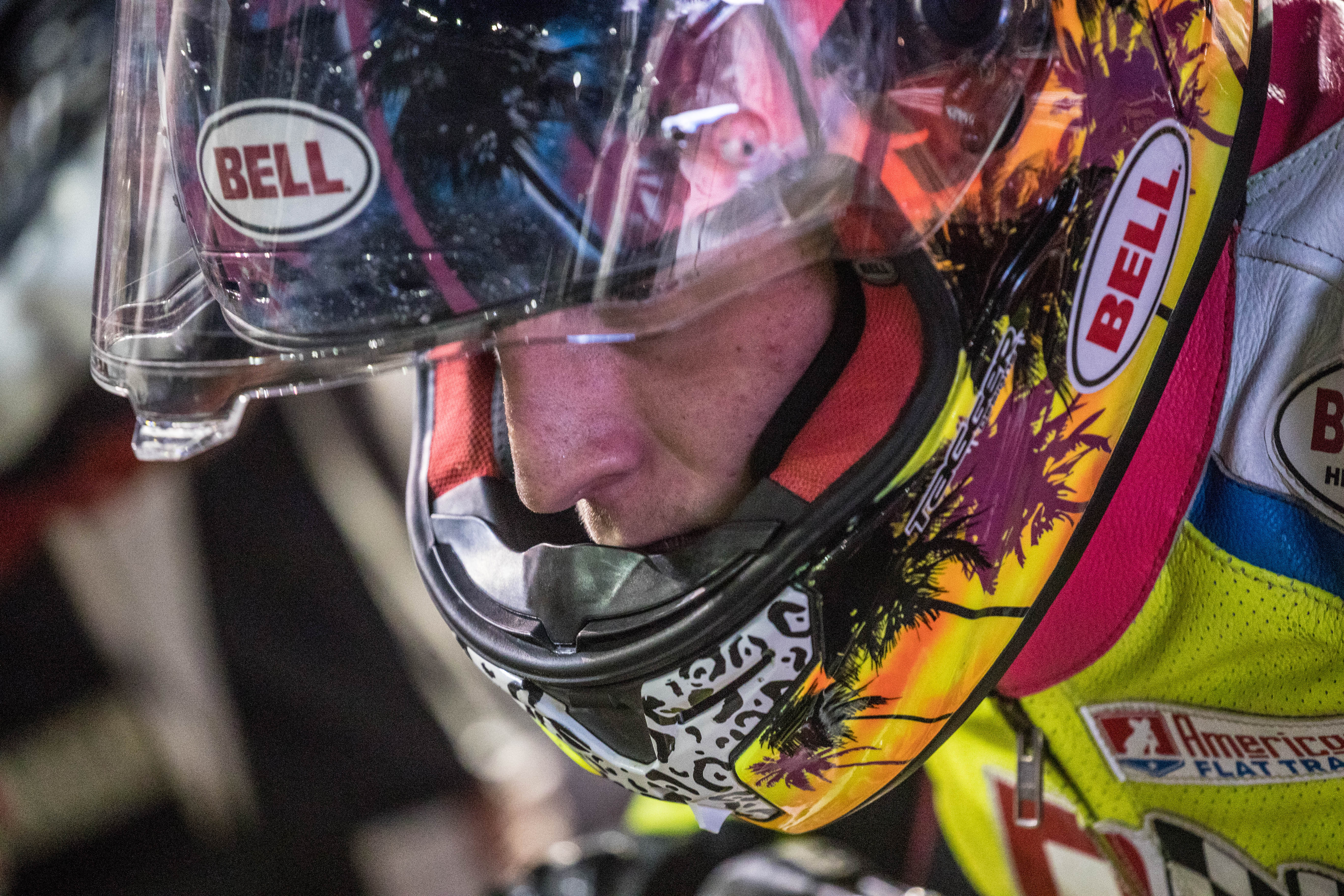 One championship, two championships, or no championships in 2019, Gauthier’s performance has served as quite the audition for 2020. While he admits he already has some offers to stay in the Singles class, he has his sights set on securing a coveted spot in the upcoming AFT SuperTwins category.

“I've heard some rumors -- I don't know what's going to happen, but I'd really like to be in the premier class and show my talent to everybody.”