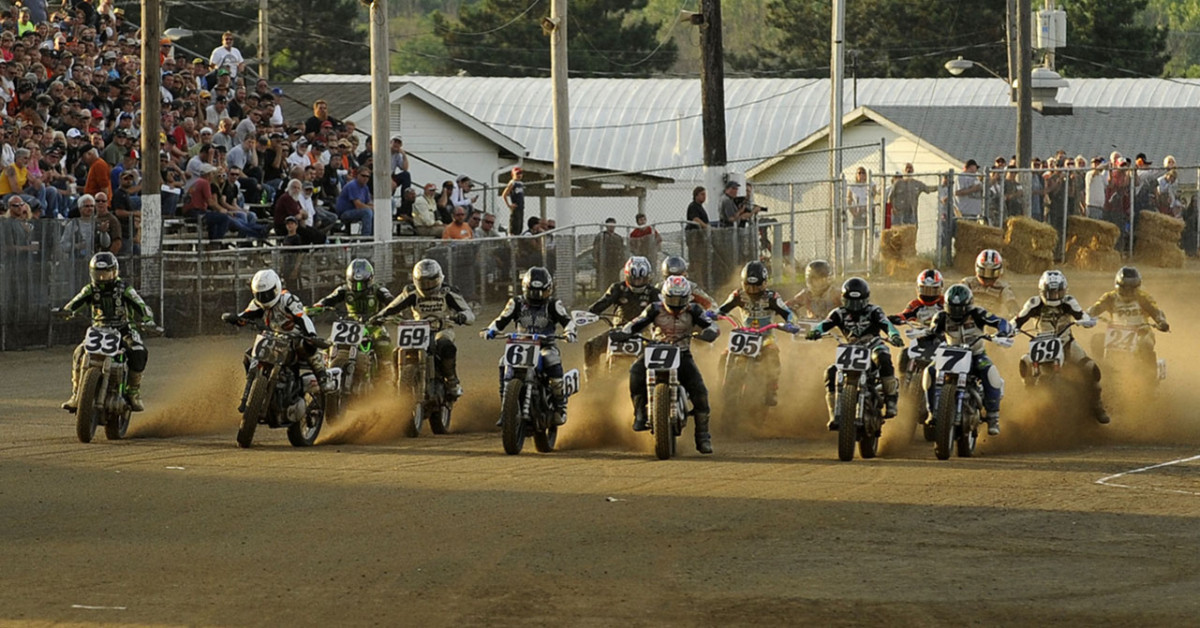 LIMA, Ohio (June 28, 2013) - Round 4 of AMA Pro Flat Track presented by J&P Cycles is finally here. In less than 24 hours, the stars of the sport will roll out their twin-cylinder motorcycles and prepare to grind it out on the uniquely designed pea gravel dirt track that makes up the Allen County Fairgrounds.

Last season, Grand National Champion runner-up Sammy Halbert (South East Harley/Harley-Davidson) claimed one of his four 2012 victories here in thrilling fashion as he and Henry Wiles (Lloyd Brothers Motorsports/Ducati) battled it out all the way to the very end. Halbert outdueled Wiles on the final lap as he crossed the finish line just .22 seconds before the Michigan product and clinched the Grand National Champion Expert Twins main event.

After suffering a torn ACL during the offseason, Halbert was forced to miss the first two rounds at Daytona to start the year. However, in Halbert's first event removed from injury, the Graham, Wash. product took full advantage of being healthy as he claimed victory at the San Joaquin County Fairgrounds in Stockton, Calif. on the series' first trip out west. The win catapulted Halbert into the top ten in points and the 25-year-old seems to be back to his typical imposing form heading into Lima.

A name that people can't stop talking about so far in 2013 is that of Brandon Robinson (TJ Burnett, USC Kawasaki/Kawasaki EX650), and for good reason. The Oxford, Penn. product is the current Grand National Championship points leader after three strong performances in the season's opening rounds. This weekend will tell a lot about Robinson, who already has one victory to his credit thus far in 2013. The 22-year-old struggled tremendously here a year ago with a 16th place finish in the main event. However, Robinson's new look in 2013 combined with his extra year of experience in the sport indicate that he's here to stay and expects to be a legitimate contender for the remainder of this season as well as many seasons to come.

Brad Baker has tasted the bitter-sweet flavor of second-place on three consecutive occasions this season. Let it be clear that there have only been a total three events this season. The positive side to this is that Baker remains second in the points and only seven points off the lead behind Robinson. The down side to Baker not being able to finish and seal his first victory is simply that; he can't finish. In almost every race, Baker has had his share of the lead and almost every time has seen it disappear in the most crucial moments. Although Baker also struggled at Lima last year, the Dodge Bros Racing Harley-Davidson rider remains as confident as ever and knows that his time is just around the corner.

Similar to how Brandon Robinson is an unfamiliar face atop the Grand National Championship Expert point standings, Kyle Johnson (DAO Apparel/Kawasaki KX450F) has been an even bigger surprise in 2013. Johnson, a rookie, took the series by storm immediately by claiming victory at Daytona during Round 1 of action to kick off the season. The 19-year-old sensation raised eyebrows again in Stockton after landing on the podium with a solid third-place finish and currently sits atop the AMA Pro J&P Cycles Pro Singles point standings heading into Lima. No one knows a whole lot about this kid. But they do know one thing - he can ride.

Stephen Vanderkuur (Parkinson Brothers Racing/Honda CRF450R) is a household name who won the 2012 AMA Pro J&P Cycles Pro Singles Championship last season and came into this season as a heavy favorite to repeat. However, after starting off the year with two finishes outside the top ten, Vanderkuur's potential to replicate is looking very slim. Look for Vanderkuur to be hungry for a strong finish here this weekend in hopes of bettering his 12th place position in the points.

The event is scheduled for Saturday, June 28, 2013 at the Allen County Fairgrounds with gates opening to the fans at 3:00 p.m. ET and opening ceremonies scheduled to take place at 7:00 p.m. ET . For more detailed event information please visit http://amaproracing.com/ft/events/event.cfm?year=2013&eid=2013021330. For tickets, please visit http://ohionationalchampionship.net/ or call (419) 991-1491. Fans who are unable to attend the Lima Half-Mile are encouraged to tune into AMA Pro Live.The live streaming devices will put fans in the directors chair, allowing for complete viewing of the event. From the first practice all the way up until the final checkered flag is dropped, tune in to AMA Pro Live to catch all of the action.