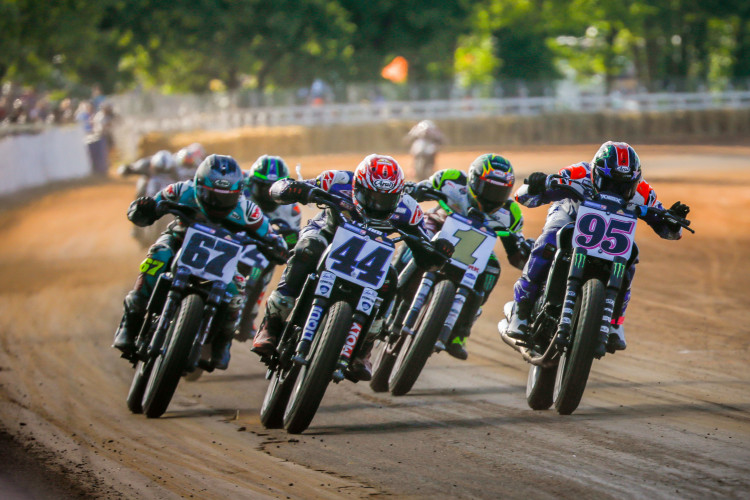 Progressive American Flat Track is America’s Original Extreme Sport as well as the guardian of the Grand National Championship series, formally established in 1954 but with roots reaching back to motorcycling’s original speed demons of a century ago.

At its core, professional flat track racing is a hyper-competitive, adrenaline-fueled American motorcycle sport featuring custom-built and production-based motorcycles reaching top speeds of 140 mph on the straights and 90 mph in the corners, all piloted by world-class athletes.

Progressive American Flat Track is widely recognized as the most prestigious and competitive form of dirt track motorcycle racing in the world. Much has changed over 100 years, but the sport remains perhaps motorsport’s purest test of man and machine.

Over the decades, many of the world’s best motorcycle racers have emerged from America’s dirt track venues – legends like original Indian Wrecking Crew members Bill Tuman, Bobby Hill, and Ernie Beckman during the 1950s, Gary Nixon and Dick Mann in the 1960s, Kenny Roberts, Eddie Lawson, and Wayne Rainey during the ’70s and ’80s, and Nicky Hayden in the ’90s and 2000s. All were superb flat track racers – several of them Grand National Champions – and many used the skills they first developed on the dirt to revolutionize Grand Prix Motorcycle Racing and attain global superstardom.

The reclassification of the new series is categorized in an easily comprehensible format: 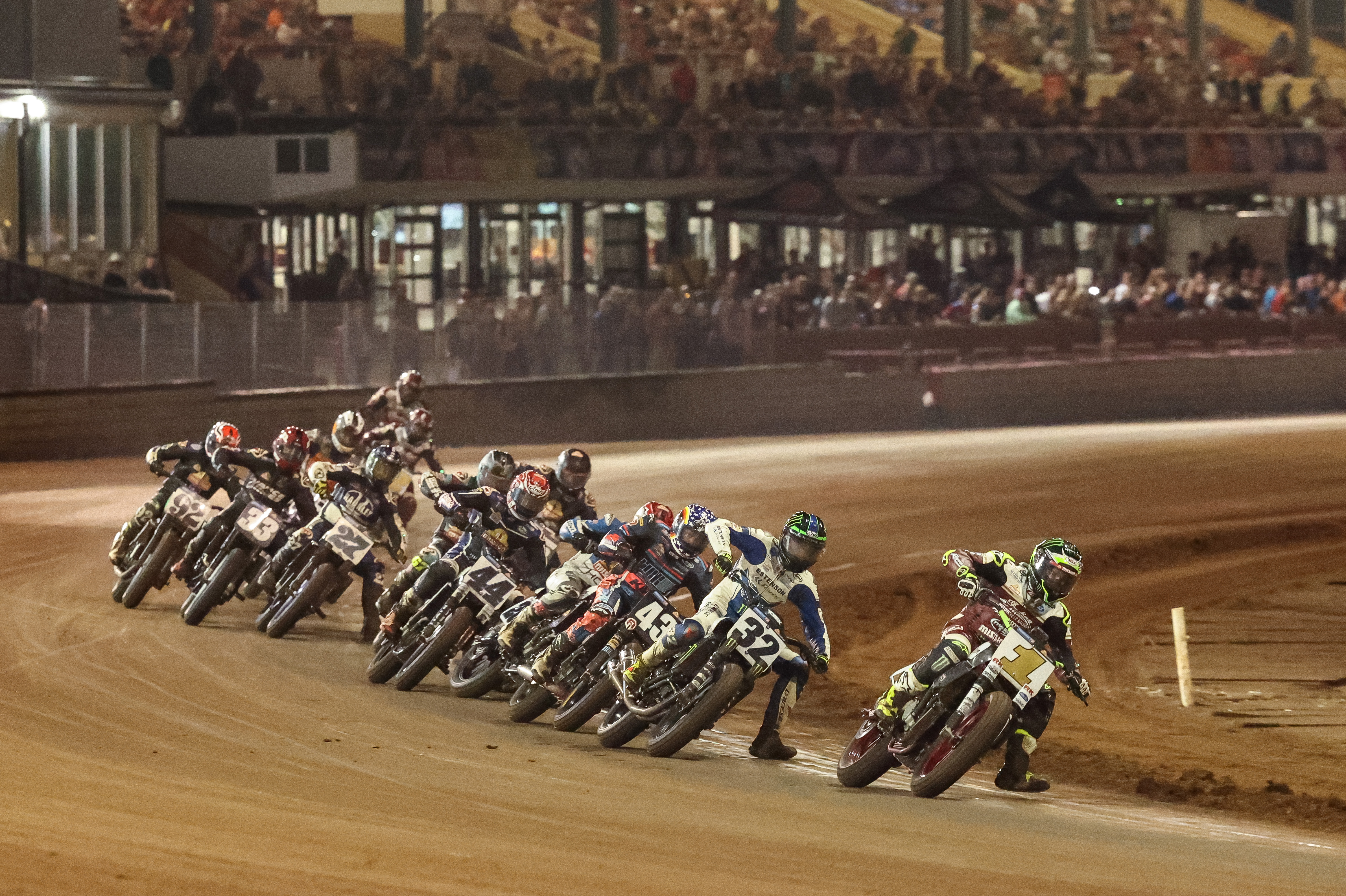 The premier Mission SuperTwins presented by S&S Cycle class consists of twin-cylinder motorcycles (649 - 900cc), utilizing the latest in motorsport technology and piloted by an exclusive company of the fastest athletes on dirt. 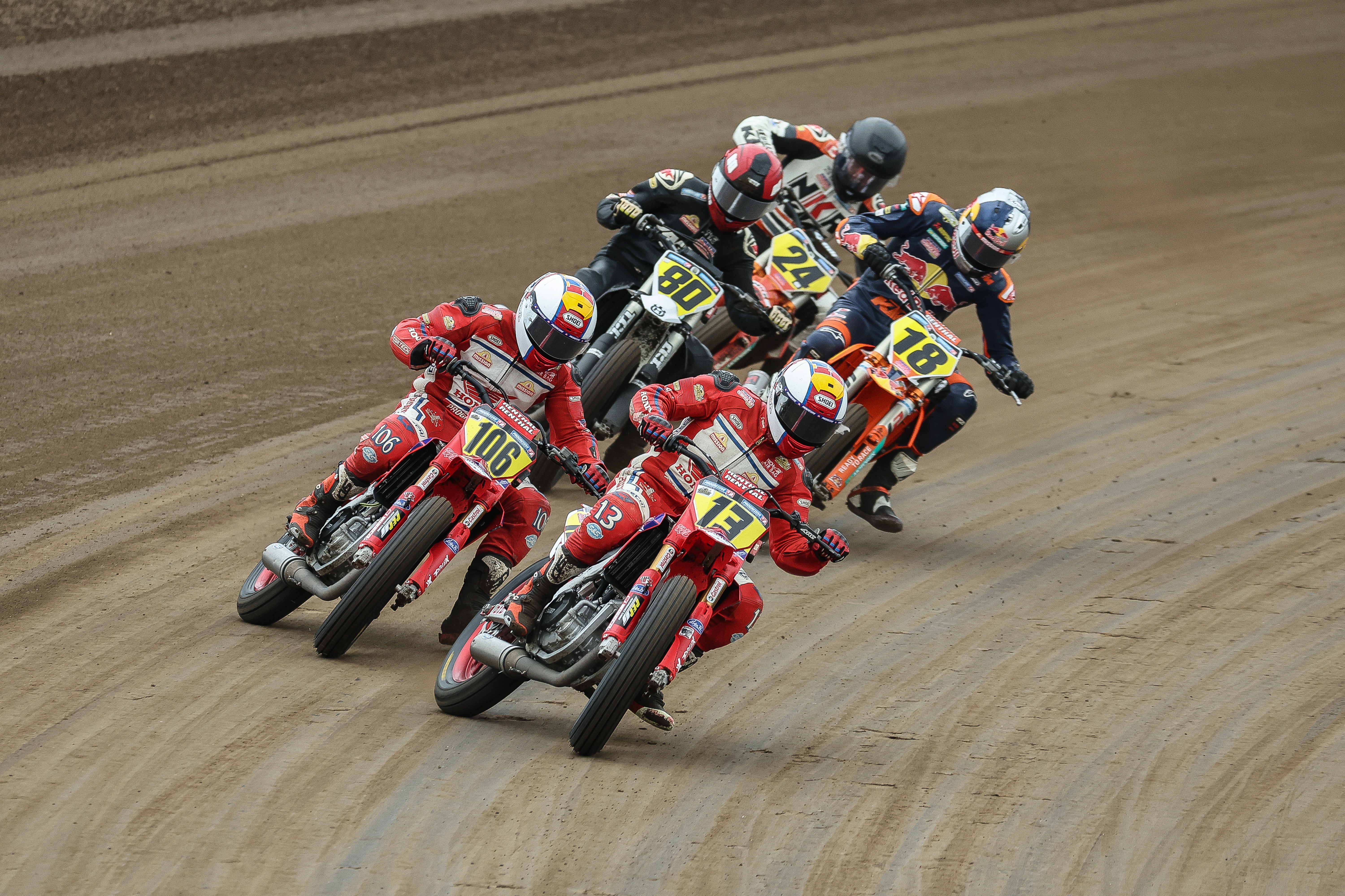 Professional flat track racing is currently experiencing a significant rebirth, much of which can be credited to changes instituted in 2017: a name change, a simpler class structure, and a significantly boosted media presence that has helped attract millions of new viewers. A continued refinement of the rules and structure have followed in recent years to further capitalize on the sport’s enormous potential.

The 2023 season slate boasts venues historic and new while featuring an impressive balance in terms of its blend of disciplines, geography and pacing. Among its most notable features is a more compact time frame over which the title fights will be waged, fitting all 18 rounds in between the return to Daytona International Speedway for a doubleheader during Daytona Bike Week in early March and an epic Labor Day Weekend doubleheader season finale at the series’ crown jewel, the Springfield Mile, in early September. The overall result is a significantly more consistent slate and superior momentum, with no more than three weeks between any two rounds.

Featuring five Miles, five Half-Miles, four Short Tracks, and four TTs, the ‘23 schedule is also intriguing in the cadence of events. The ordering of track types presents increased opportunity for dynamic championship battles, encouraging win streaks and comebacks alike. All four STs take place in the opening six races, the middle of the season is Half-Mile heavy, three TTs are scheduled over a span of 13 days near the conclusion of the season, and the high-profile Miles are delivered in a run of two and three.

That balance extends to its geographic reach. Hitting locations on both coasts and numerous points in between, the diversity of locales supports both the sport’s growth and continued strength across the nation. So too does its mix of historic races, long-time mainstays, returning favorites, and a healthy dose of all-new stops, including Senoia, Georgia, Ventura, California, and Bridgeport, New Jersey.

America’s oldest and purest form of motorcycle sport is back on the radar, making that thunderous noise we all love, and it’s certain to continue in 2023. The momentum created over the past six years has Progressive American Flat Track well positioned to take the next step in its meteoric rise, spearheaded by the Mission SuperTwins class.

Mission SuperTwins was engineered with the specific intent of building the profile of the stars of the sport, dramatically increasing visibility for teams and manufacturers and driving ROI for the sponsors that support their competition efforts. Successfully packaging the premier Progressive AFT class as the best flat track racing in the world and as a scalable national professional sports league allows all key stakeholders (teams, OEMs, riders, partners, broadcasters and fans) to enjoy the benefits.

As expected, Mission SuperTwins immediately took shape as an intense battleground, stacked with world-class riders down the order. That intensity took another step forward last season following a rulebook recalibration intended to further level the playing field. Perennial title rivals Jared Mees and Briar Bauman were joined in a season-long battle for supremacy that also featured Dallas Daniels and JD Beach, while riders representing Indian Motorcycle, Yamaha, Harley-Davidson, and KTM all fought their way onto the podium.

The field is set to receive yet another boost in’23 as the Mission Production Twins class merges with Mission SuperTwins to unify the twins following a ‘22 season in which the innovative Mission Production Twins Challenge proved the competitiveness of the support category at the sport’s highest level while simultaneously operating as a testbed to further finetune the rulebook.

Parts Unlimited AFT Singles has long shone a spotlight on Progressive AFT’s next generation of stars and none shone brighter than Kody Kopp in 2022. Kopp is set to return to defend his crown in ’23, but there will be no shortage of worthy challengers with the likes of Dalton Gauthier, Morgen Mischler, Trevor Brunner, Max Whale, Trent Lowe, and Chase Saathoff all eager to take the throne for themselves.

The degree of machinery diversity in Progressive American Flat Track is astounding and bound to grow even greater in the coming years.

Boil it all down and you’re left with this single, undeniable fact: There really is nothing like Progressive American Flat Track. Anywhere.