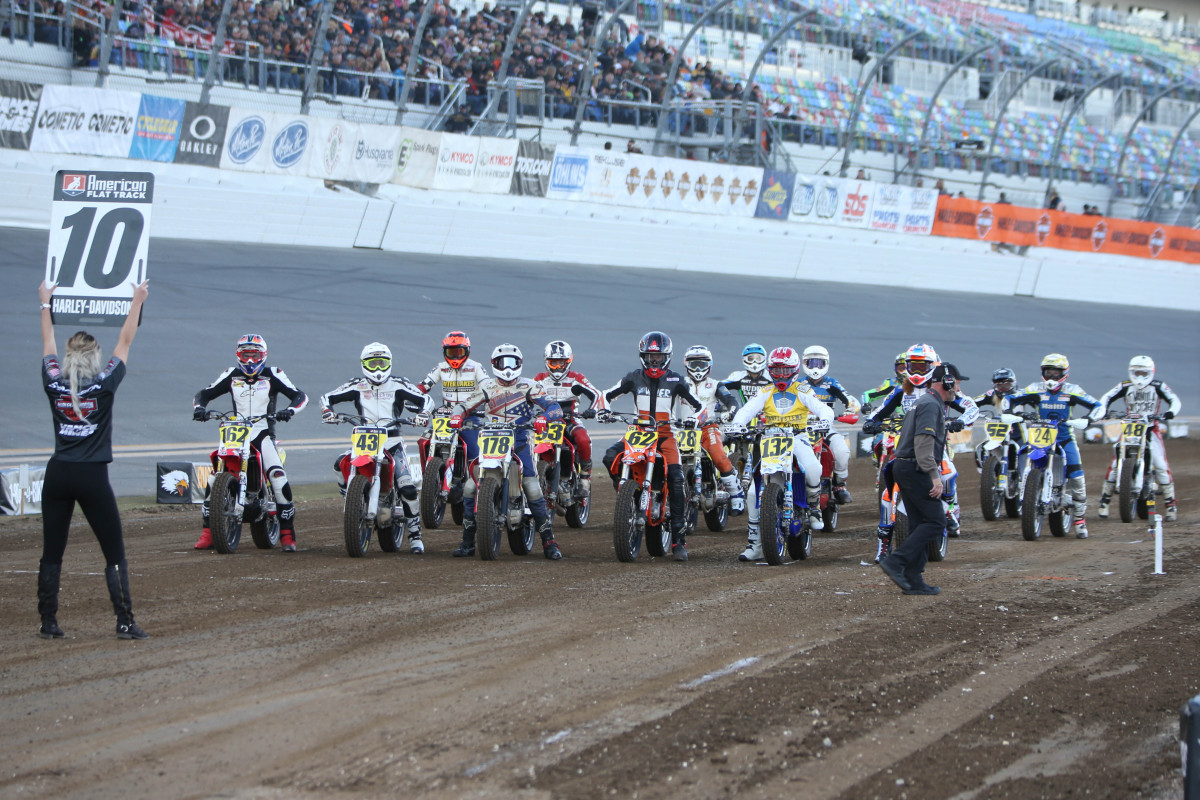 DAYTONA BEACH, Fla. (March 12, 2019) – The wait is over. American Flat Track is set to kick off the 2019 season under the lights at Daytona International Speedway for the third annual DAYTONA TT presented by Russ Brown Motorcycle Attorneys this Thursday, March 14.

The Bigger, Better, Faster circuit has been completely redesigned under the expert guidance of some of the sport’s leading legends. The new layout features a higher-speed section utilizing the fabled Speedway’s start-finish straightaway on the banked tri-oval asphalt, along with wide-open corners in the dirt that should maximize passing opportunities along the way.

The focus will shift from the track to the racers navigating it come Thursday evening. No rider has shone brighter under the spotlight than two-time defending AFT Twins presented by Vance & Hines champion Jared Mees (No. 1 Indian Motorcycle/Progressive Insurance FTR750).

Mees has established himself as a dominant force, both in the DAYTONA TT -- where he comes in with two consecutive victories -- and the series at large, where he’s won two straight crowns on the strength of a combined 20 victories. During that two-year span, Mees demonstrated such devastating form that he regularly relegated the rest of the world’s best dirt track racers to a squabble over second.

Of course, there will once again be a deep pack of privateer Indians coming off a season in which the manufacturer garnered all but one Main Event victory.

Headlining that group is 2018 AFT Twins runner-up Henry Wiles (No. 17 Bandit Industries/DPC Racing Racing/Wilco Racing Indian FTR750). Wiles proved to be an all-around title threat last season, but he is still at his most dangerous on the TTs, where he’s logged an astonishing 19 career victories. In last year’s DAYTONA TT, Wiles leveraged that trademark TT genius to round out the podium, and he could be poised to fare even better this time around.

As thoroughly as Mees and Indian owned the series in 2018, there could be a new narrative emerging in 2019. Challengers to the throne will point out that, after winning ten of the season’s first 13 races (plus another in which he was stripped of victory due to a mechanical DQ), the champ was actually shut out over the final five races.

Additionally, a revamp of the regulations, paired with augmented efforts from rival manufacturers, creates for an unpredictable championship landscape heading into the opener.

Of particular interest is the reconstituted Kawasaki effort featuring Bryan Smith (No. 4 Crosley Brands/Howerton Motorsports Kawasaki Ninja 650). Reunited with the title-winning combination, Smith enters 2019 riding the momentum of three wins over the final four races of 2018 after finally snapping a year-plus winless drought.

This year is no different. The Roof Systems AFT Singles opener will pit the defending champion versus the expected title contenders versus the TT specialists versus the wild cards versus the icons.

A long list of rivals looking to get their title campaigns started off right includes last year’s championship runner-up and ‘16 class champ Ryan Wells (No. 94 Estenson Racing Yamaha YZ450F), who moves over to Estenson for 2019.

2018 AFT Twins podium finisher Chad Cose (No. 49 Suzuki/Ritchie Reynolds Racing/Vance & Hines RMZ 450) is an interesting case after finishing sixth in points in the premier class. He’s dropping down a weight class this year as he hunts for a championship.

AFT Singles is reliably loaded with TT experts who step up big when presented the opportunity. Jesse Janisch (No. 132 Roof Systems Dallas TX/Öhlins Yamaha YZ450F) certainly fits that bill. While he’s quick on any type of circuit, he’s at his very best in the TTs, where he has the potential to get out front and leave the pack in his wake.

The DAYTONA TT has immediately proven quite the draw for talented wild card riders, largely consisting of top-flight roadracers who frequently excel in TTs and elite dirt trackers from across the globe. Last year, roadracers Jake Lewis (No. 85 Team M4 Suzuki RMZ 450), Nick McFadden (No. 118 Westside Truck Parts/Rickdiculous Racing Yamaha YZ450F), James Rispoli (No.71 KC74 Tracking/Hudson Valley Motorcycles Kawasaki KX450F), and Spanish flat track star Ferran Cardús (No. 377 Bullet Strong Racing/Vanilla Cycles Honda CRF450) were lightning quick at the DAYTONA TT, and they’re all back for another go at in 2019.

Racing legend Ward has taken national titles in Supercross, Motocross, and Supermoto, and won in Indy Car racing. He was inducted into the Motorcycle Hall of Fame a full two decades ago, but the 57-year-old legend has consistently proven capable of taking down newer generation stars and should not be underestimated.

Sipes, meanwhile, stands as America’s first-ever ISDE overall winner and a two-time Supercross race winner himself. His TT chops are well proven too, as he reigned supreme in last year’s AFT Singles Main Event at the Buffalo Chip TT.

As one would expect, the off-track attractions and activities for an American Flat Track season opener set in the middle of Bike Week are suitably spectacular:

A Pre-Event Bike Night Kickoff Party at ONE DAYTONA gets the celebrations rolling on Tuesday, March 12, from 6:00-8:00 pm, which includes a Rider Meet & Greet and Q&A session. The stars of AFT are bringing their race bikes and rigs along and the admission is free, so that’s a no-brainer for AFT fans.

On race day -- as if the action on track wasn’t enough -- the UNOH Fanzone will features vendors, motorcycle displays, Kid Zone with inflatables and rock wall, trike racing and live music from Beartoe and Friends. A fireworks display will follow the AFT Singles and AFT Twins Main Events to close things out right.

Meanwhile, Super Hooligans Round 2 will take place on a custom-built short track inside the tri-oval. Of particular note, the RSD-sponsored Super Hooligans will race on new, customized Indian FTR 1200 machines. World-famous freestyle motocross icon and founder of Nitro Circus, Travis Pastrana, will make his return to DAYTONA as part of the Super Hooligan roster.

Founder of RSD and ringleader of the Super Hooligans, Roland Sands, will serve as the DAYTONA TT Grand Marshal.

Tickets are on sale now and can be purchased at https://tickets.americanflattrack.com/2019-daytona-tt.html. Tickets start at just $35 online ($45 at the gate), and upgraded options include the amazing Trackside Bleachers on Pit Lane and

If you can’t make it to DAYTONA, FansChoice.tv has you covered beginning at 1:00 p.m. ET with Opening Ceremonies (featuring Billy Lane, Scott Parker and Jay Springsteen) scheduled for 7:00 p.m. ET at the following link: .

Finally, be sure to tune into the feature broadcast of the DAYTONA TT on NBCSN with flag-to-flag coverage of both Main Events enhanced by exclusive features and cutting-edge aerial drone and onboard footage. It will debut on Saturday, March 24 at 4:00 p.m. ET/1:00 p.m. PT and will re-air on March 28 at 12:00 p.m. ET/9:00 a.m. PT.