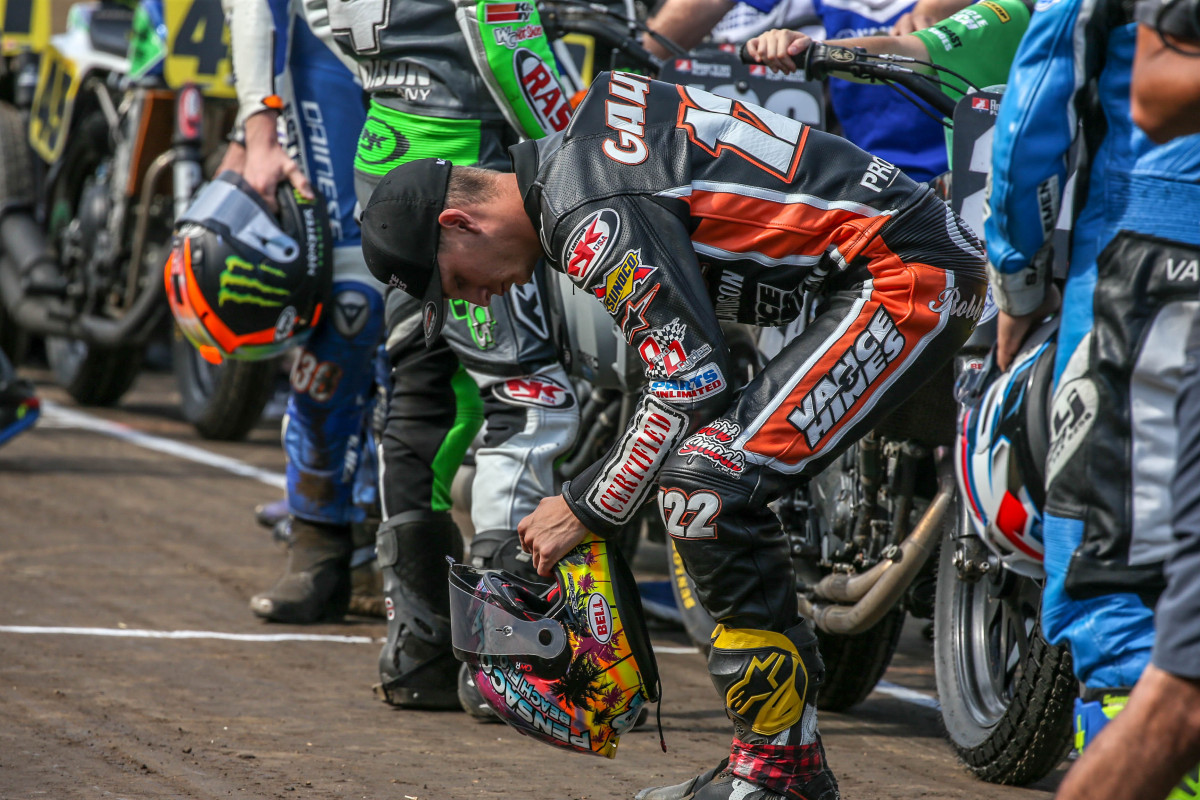 Anyone who offers up Dalton Gauthier as their pick to be the biggest surprise of the upcoming 2020 American Flat Track season is more likely to meet resistance for the “surprise” tag than they are in predicting breakout success for the 21-year-old at the sport’s highest level.

Gauthier not only enters his rookie AFT SuperTwins season as the reigning AFT Singles champion but with the reputation as one of the most naturally gifted riders to hit the scene in recent memory.

That exceptionally high regard makes it all the more astonishing to remember that at this time one year ago, Gauthier wasn’t even sure he’d be racing in 2019, or that he didn’t compete at all in 2018, nor the bulk of the 2017 season..

A career once derailed by a mistake and rule violation is firmly back on track, and an uncertain future has been replaced by a coveted seat on the Harley-Davidson/Vance & Hines Factory Flat Track Racing Team.

“It's a whole different story now,” Gauthier said after taking a moment to reflect just how pivotal 2019 proved, not only for his career, but his life more generally.

“It's been pretty crazy. It changed everything -- my perspective on everything. Last year, right around this time, I didn't have anything. I was trying to get back into racing, and now I'm on a factory ride. I have a paid salary, and I just have to show up to the racetrack and ride basically. It couldn’t be any better than this, honestly.”

While Gauthier’s AFT Singles title may get top billing in his list of accomplishments, his performance in the AFT Production Twins class was arguably an even more direct springboard into the premier class (which, incidentally, is the exact niche the class was designed to fill...).

He garnered headlines for himself and Harley-Davidson when he established the XG750R as an American Flat Track race winner at the Sacramento Mile. He then proved it was no fluke with another victory the very next time out at the Springfield Mile. 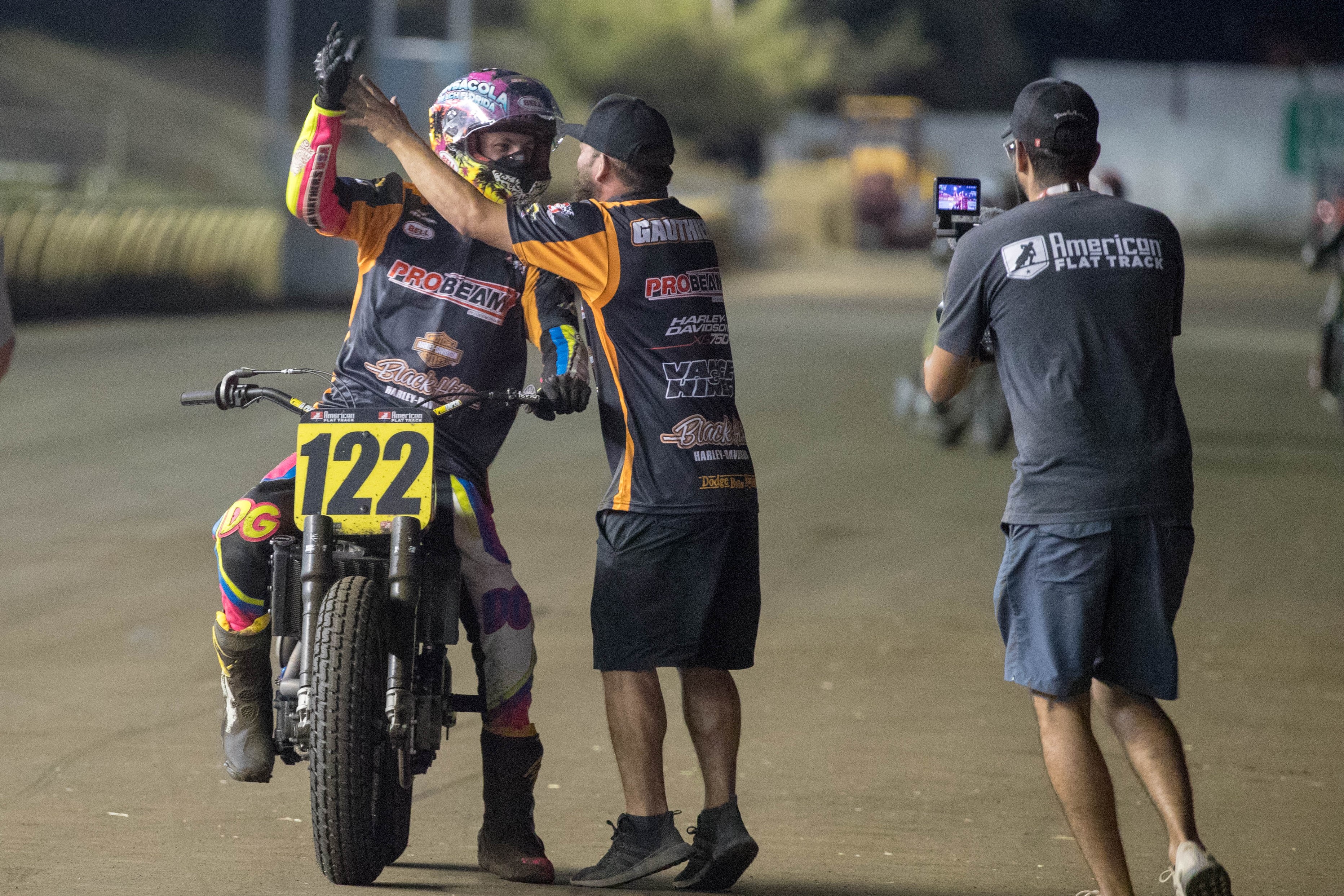 Gauthier and crew chief Rob McLendon celebrate the first victory for the XG750R at the 2019 Sacramento Mile. 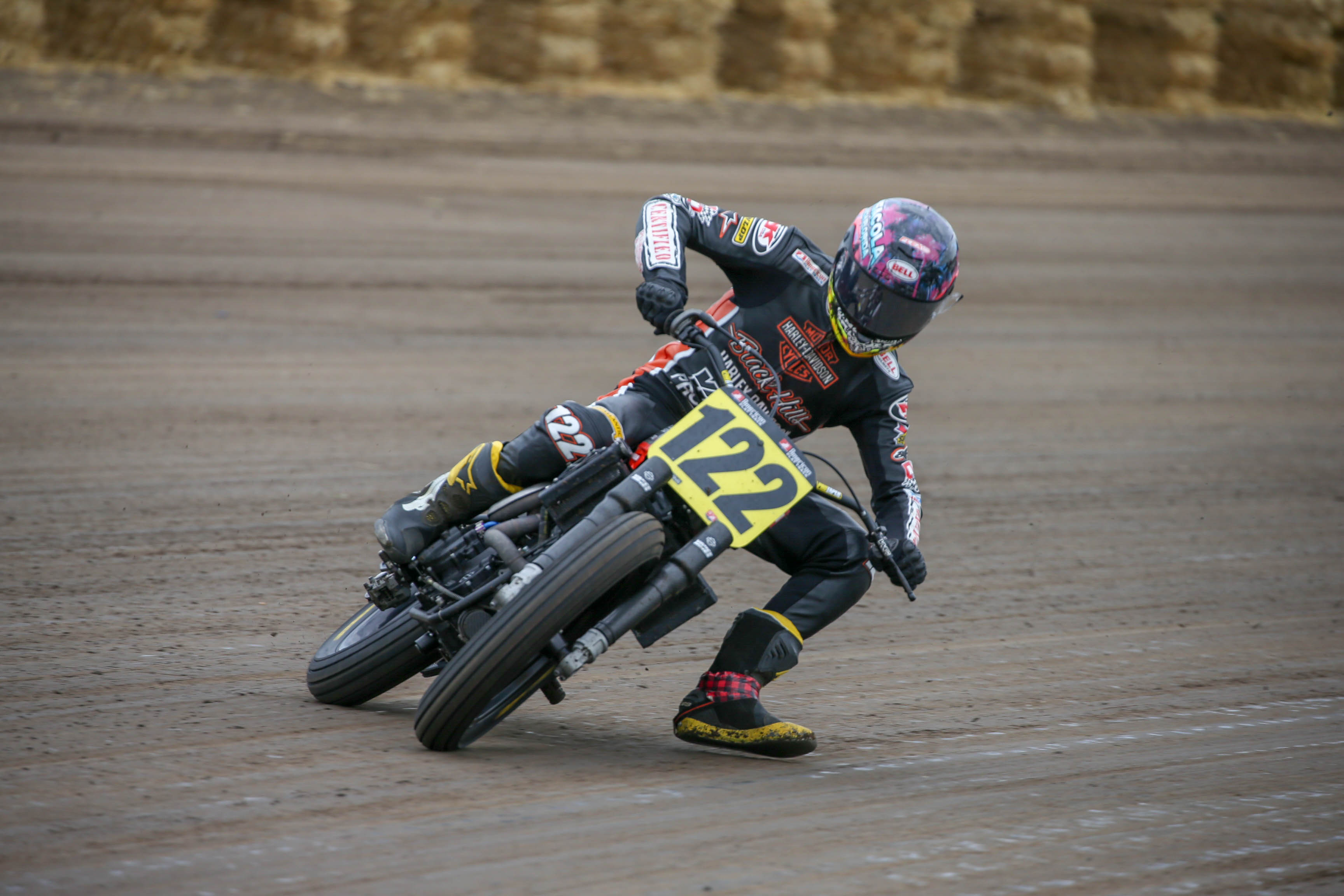 Those triumphant outings with the Black Hills Harley-Davidson squad -- and while working with direct support from Vance & Hines -- served as a compelling audition for 2020. But the reality is, V&H had its eyes on Gauthier even prior to that.

“Vance & Hines started helping me out around Perris,” Gauthier said. “They gave me some pipes to try out and I liked them, so we stuck with that. Terry Vance was pretty happy with me, and I guess they talked to Terry Rymer about putting a program together for me with Black Hills HD.

“I was ecstatic to get the wins, and we showed the Harley guys that I could win on the thing. I think that brightened their eyes a bit. I think I showed some people what I can do on the twin.”

Gauthier is currently in grind mode preparing for the 2020 season. The same is true for a revamped Vance & Hines/Harley-Davidson Factory Flat Track Racing Team that’s deeply committed to ruling the sport again following an extended run of dominance by rival manufacturer Indian Motorcycle.

The team -- now overseen by Crew Chief Ricky Howerton -- has spent countless hours developing and testing the XG750R during the offseason. In fact, Gauthier and teammates Bryan Smith and Jarod Vanderkooi were turning laps on the bike even prior to the official announcement of the 2020 program.

Gauthier said, “We've been testing a bunch, and I like the SuperTwins bike even more than the Production Twins bike. It's a whole lot different. It is kinda the same bike, but it's got the factory heads on it, and it has more power. Ricky has been working his butt off this winter, and he's made huge improvements on the bike.

“Having Bryan on the team is huge for me too. I'm going to try to learn as much as I can from him, especially at the Miles. We've been staying close and testing together. He’s always been one of my heroes growing up, so it's been cool to be around and see all the work that goes into it.”

Even with the ‘20 opener looming in mid-March, there’s still more work yet that needs to go into it before they’re fully ready to go.

“We have one more test right before DAYTONA with the TT bike, which I haven't tried yet. On the big tracks, we already feel really good. I think we're going to be up front and surprise a lot of people. And I know my TT skills are going to be good, so I'm not too worried about that.

“The team is gelling really well together. I think Bryan, Jarod, and myself are really happy with the bike, and Ricky is working at it every day looking for things to make it even better.”

It’s also no small thing that Gauthier still has D&D Cycles’ Rob McLendon (“Robby-Bobby”) in his corner. McLendon was a hugely important figure in helping make last year’s dramatic change in fortunes a reality through his multifaceted support.

He’ll continue to play a role in 2020, although it’s one that’s had to change as a natural byproduct of their runaway success together a year ago when McLendon served as Gauthier’s team owner, crew chief, personal trainer, and trackside council. 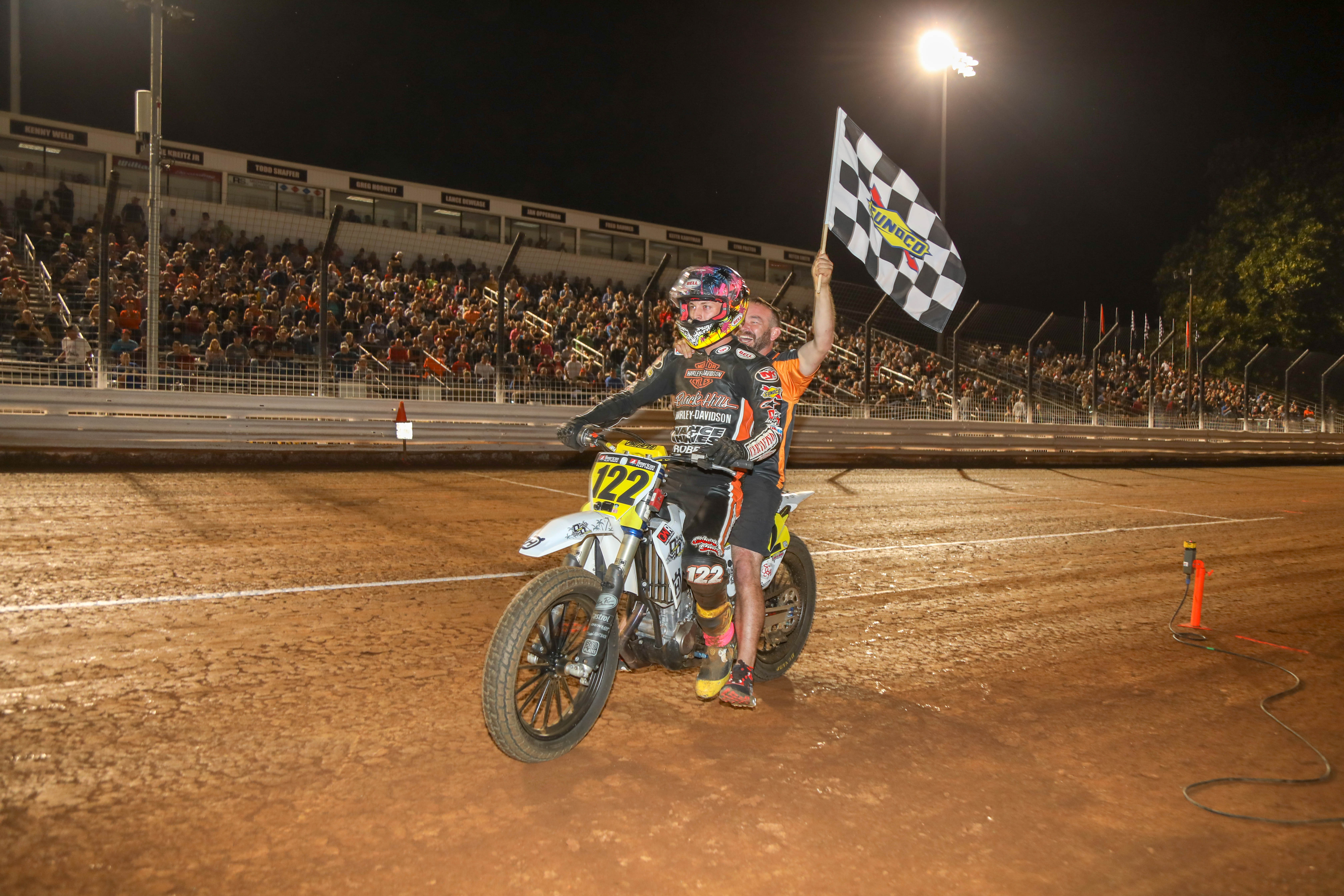 In Gauthier's home state of Pennsylvania, Dalton and McLendon take another victory lap.

Gauthier explained, “Robby-Bobby is going to be, more or less, my riding coach at the racetrack this year. He won't be my mechanic because Harley has their own mechanics already set up with me. But he's still going to be around, which is important.”

“Last year was the best thing that could have happened to me, working with Rob. It's still like a dream come true thinking about it. He was pretty much like my big brother and my dad at the same time. He was all-around supportive of what I went through.

“And he funded the whole program. I have my little sponsors to help out with gas money, but other than that, he and his parents pretty much funded everything. He helped me train -- everything… He was just there for me all the time. That helped me out with my confidence. If it weren't for him, I wouldn't be where I am now. He's just happy where I'm at. He's stoked for me.”

Fans expecting big things from Gauthier in 2020 should rest assured that Gauthier is right there with them.

“My goals are always high. I always want to win races, but I also have to think of the bigger picture. It's my first year, and I have a lot of learning to do. The top guys in that class know so much and are so smart when it comes to race tactics. I'm just going to have to learn as much as I can.

“I'm happy that the season starts at DAYTONA because I'm always strong there. That's a big confidence booster for me. I think I can top five, but I'd like to be top ten at least and get out of there healthy and be ready for Atlanta where I know I can be up front.”

He’d especially like to make history this year -- essentially by repeating history, only on a bigger stage -- by taking the XG750R to its first-ever AFT SuperTwins victory after doing the same in the Production Twins class in 2019.

“I'd really like to be the first rider to win on it in the premier class. Another goal of mine is to be the top rider on the team. I'd be happy for Bryan or Jarod if they get the win first, and I’d be happy if they are up front consistently too. But I want to be main guy. I want to show Harley and Terry Vance and everyone else at Vance & Hines that I'm the real deal.”

“Terry told me no pressure -- just go out and ride the motorcycle how I know how and I should be all right. I'm trying not to overthink it.”

That said, as much as he’d like to, it’s a big ask to push the monster opportunity before him out of his mind completely. It’s not every day you have a chance to follow in the tire tracks of the sport’s greatest icons and put AFT’s most historic squad back on top following an extended dry spell.

“It's crazy to think about. Not many people get the opportunity to race for the factory Harley-Davidson team. You go way back in the day and it's Springsteen, and Parker and Carr... It's the best in the business. This is a huge opportunity for me to show people what I'm really about.