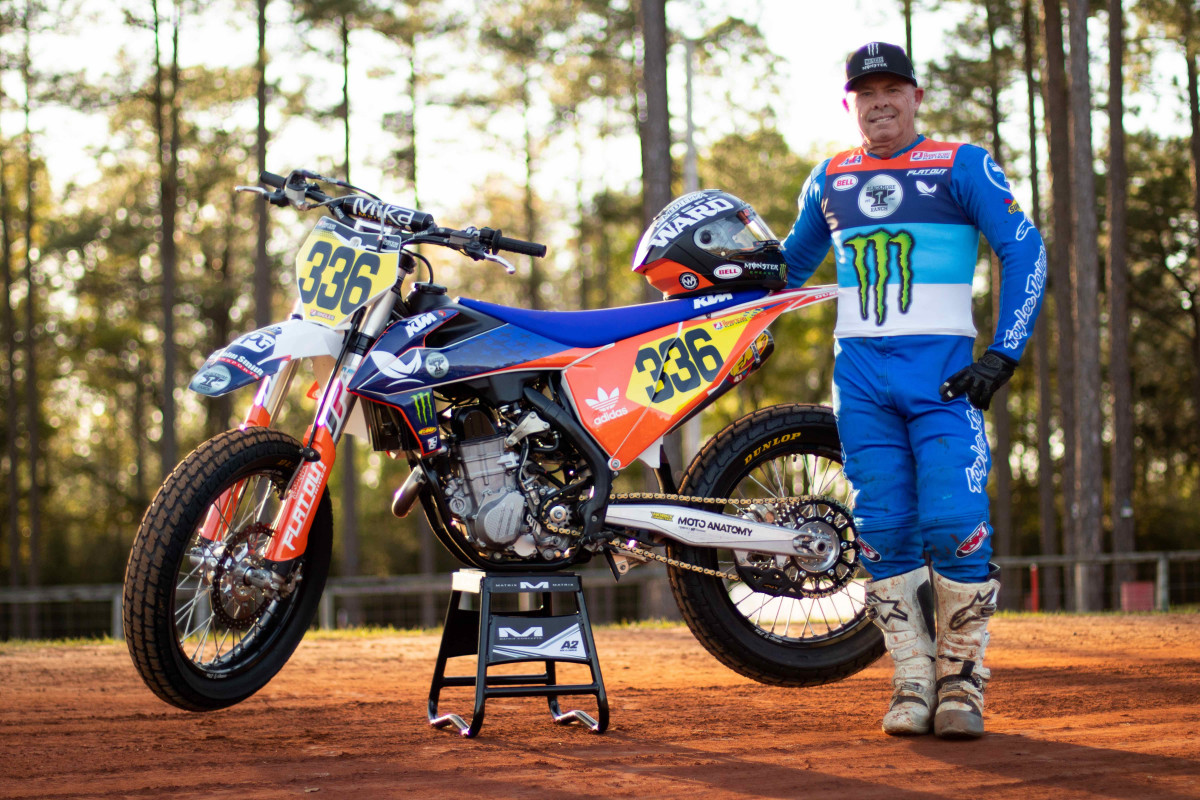 It’s an old story, one you’ve probably heard before: Aging athlete comes out of retirement to teach the youngsters a lesson, yadda, yadda, yadda...

When you hear this sort of thing you probably shake your head and think (or whisper under your breath), “Nahhhh, ain’t gonna happen…”

See, Jeff Ward isn’t your average late-50s athlete/racer. He’s not even above average, or well above average. He’s a Motorcycle and Motorsports Hall of Famer, a multi-discipline, multi-time national champion motorcycle racer and a guy who came very close to winning the Indianapolis 500. He’s as gritty and talented a racer as you’ll find anywhere, and despite his advanced age, which has him eligible to collect Social Security checks in about five years, he’s in fantastic shape.

All of which explains why, for many fans and even some knowledgeable pundits, Wardy’s a favorite to win the third-annual DAYTONA TT tomorrow evening at iconic Daytona International Speedway.

It’s not just skills and physical conditioning that have him leading the list of probable winners for the first TT of American Flat Track’s 2019 season. Wardy, who’ll turn 58 in June, might just be the most experienced rider out there Thursday night on the type of race track the riders will be dealing with – a point-and-shoot TT course with an asphalt section and a jump. Sound familiar? If you know anything about supermoto racing, and the short-lived national championship the AMA oversaw from 2003 to 2009, it might. Care to guess who won the 2004 and 2006 AMA Supermoto championships – and who finished top-five in five of the seven seasons? Yep, Jeff Ward. 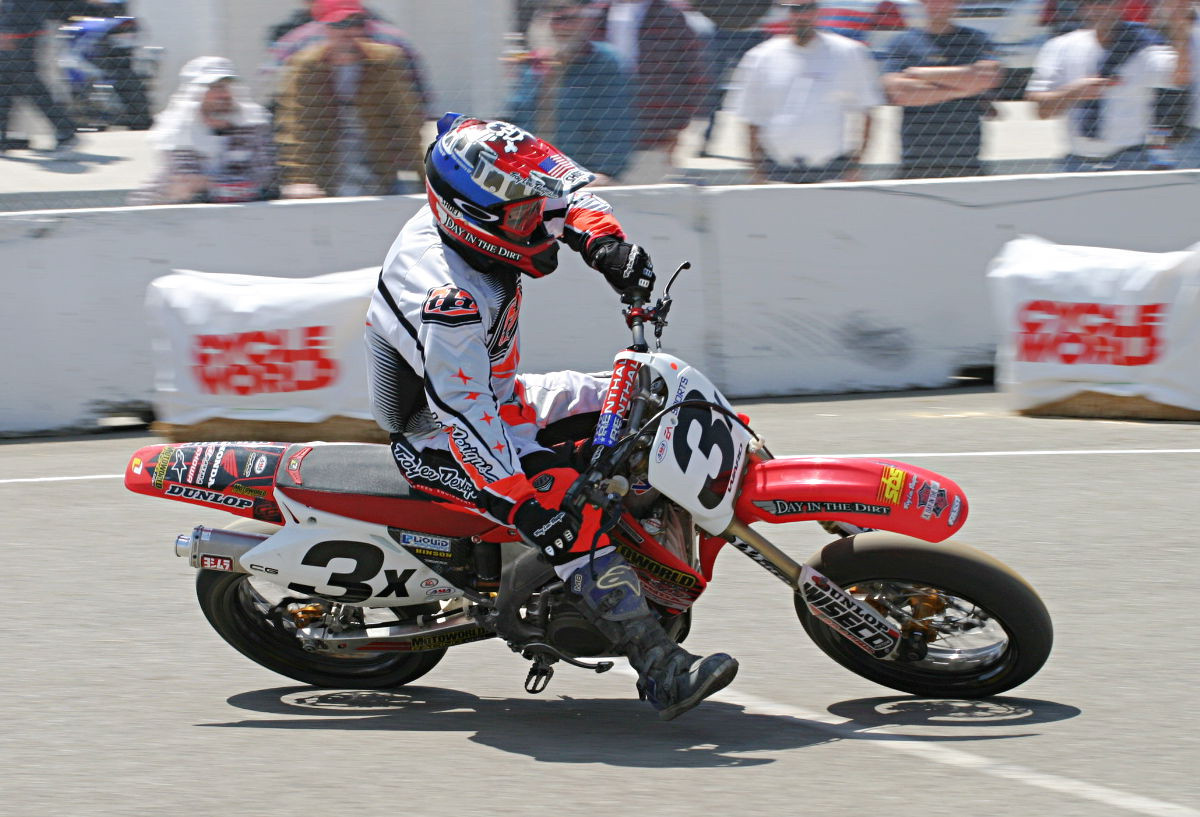 Wardy on asphalt (and slicks) during his championship-winning AMA Supermoto days.

“It’s basically a short version of a Supermoto track,” Ward told us a few days before Daytona, “so I’m pretty sure I’ll be comfortable on it. I’m OK with the asphalt, too, having raced on plenty of that over the years. I’ve heard a little about [the asphalt] being sorta dangerous due to the speeds and the transitions from asphalt to dirt and vice versa. But when I remember back to the Superbikers races I did at Carlsbad Raceway back in the 1980s, I have to laugh a little. Those were really hairball, really dangerous, with 120-mph speeds on the dragstrip and return road, and a scary-fast downhill section that had Armco barrier and hay bales and Porta Potties for you to crash into at 100-plus mph. So this will probably seem pretty tame. 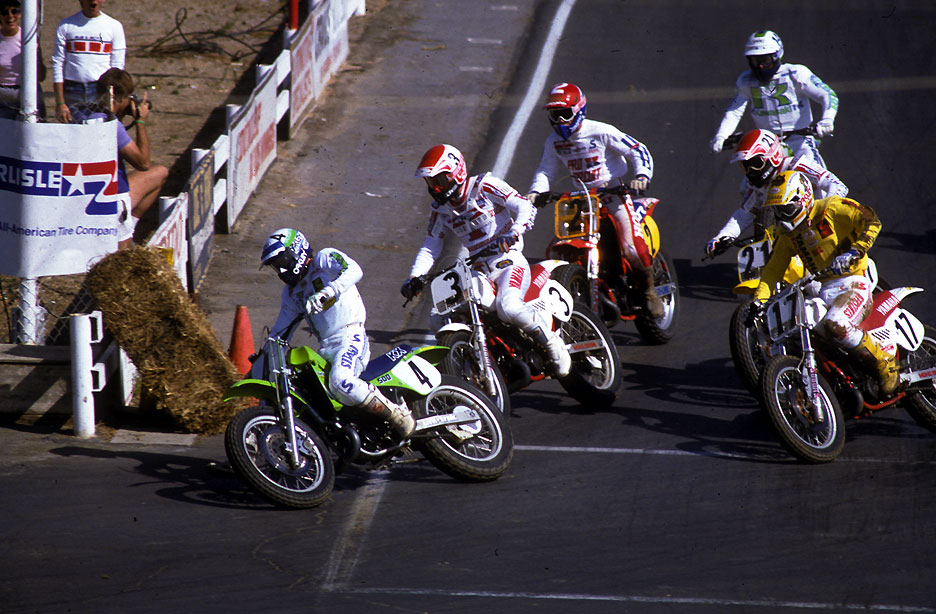 More asphalt competition for Ward (4), this time during the legendary made-for-TV Superbikers event at Carlsbad. "They were hairball events," he admits now, though he didn't consider the danger in his 20s.

“Of course, I was in my 20s then, and danger doesn’t register when you’re young and made of rubber and seemingly indestructible. Now that I’m ancient it all might be a bit scarier [laughs].”

Wardy might be ancient to his four kids (who he says aren’t surprised at all at this dive back into professional racing’s deep end), but he’s certainly in fine physical shape. Tons of bicycling, motocross riding, gym work and a quality diet have him trimmer, stronger and more flexible than he’s been in years.

“I feel pretty confident physically,” he says. “I’ve been riding and bicycling and lifting and stretching a lot, and while I’m not as strong as I was years ago, I’m think I’m good to go. I don’t really feel I have any physical limitations or liabilities relative to the other riders. I can ride just as fast as I did before, and just as long, too, as long as we’re not talking pure motocross stuff. Of course, I’m sore every day! [Laughs] Turns out that working out a lot does have a downside! Who knew!?

“So besides the soreness, I’m feeling pretty good. I’m just gonna go as fast as I can, you know? See where I am after practice and qualifying and the heat race, see how I stack up, see how everyone else looks … then I’ll know how hard I need to push.” 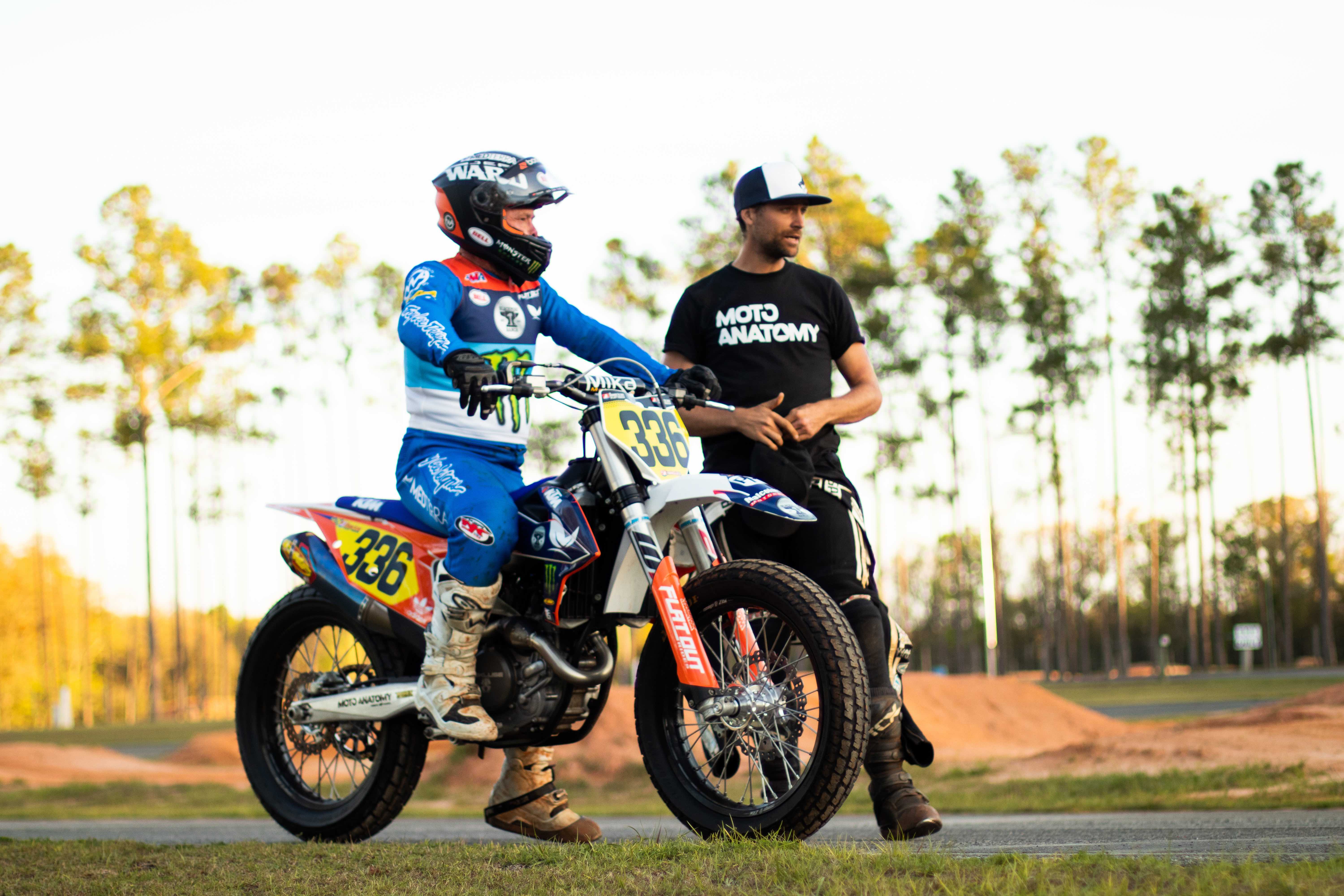 Trainer-to-the-stars Johnny Lewis is coaching and sponsoring Ward in his 2019 AFT TT bid, and is also supplying the KTM 450 Ward will ride at Daytona. "He's got such amazing feel for the bike and what it's doing," Lewis says. 336, by the way, was Ward's national number in motocross when he first began racing 125s in the days before he got on Kawasakis.

Wardy will have pretty darn good motorcycles on which to push, too – KTM 450 SX-Fs, one secured by Moto Anatomy’s Johnny Lewis (who’s sponsoring and coaching Ward this year) and Pennsylvania’s Solid Performance KTM, and another on the West coast for training and the upcoming Arizona round on April 27. Ward’s plans are to run all five American Flat Track TTs this season: Daytona, Arizona in April, Springfield in May, and the Buffalo Chip and Peoria TTs in August.

“Once I decided to actually do this after talking it over with Moto Anatomy’s Johnny Lewis,” Ward says, “I got hold of KTM’s Chris Fillmore, who I did some Supermoto racing with years back, and Roger DeCoster, who I’ve known forever. They were happy to help out, and after riding it I’m really impressed with the bike. The KTM 450 I’ve be riding this past week with Johnny here in Florida, which is the bike I’ll be riding at Daytona, has the same engine tune and suspension as the one I’ve been riding back home at Blackmore Ranch in Murietta, California, so it all feels comfortable. The Solid Performance KTM folks did the suspension on both bikes, and I think we’ve got the setup we need, which is nice cause it’s never good to be chasing settings at the track.” 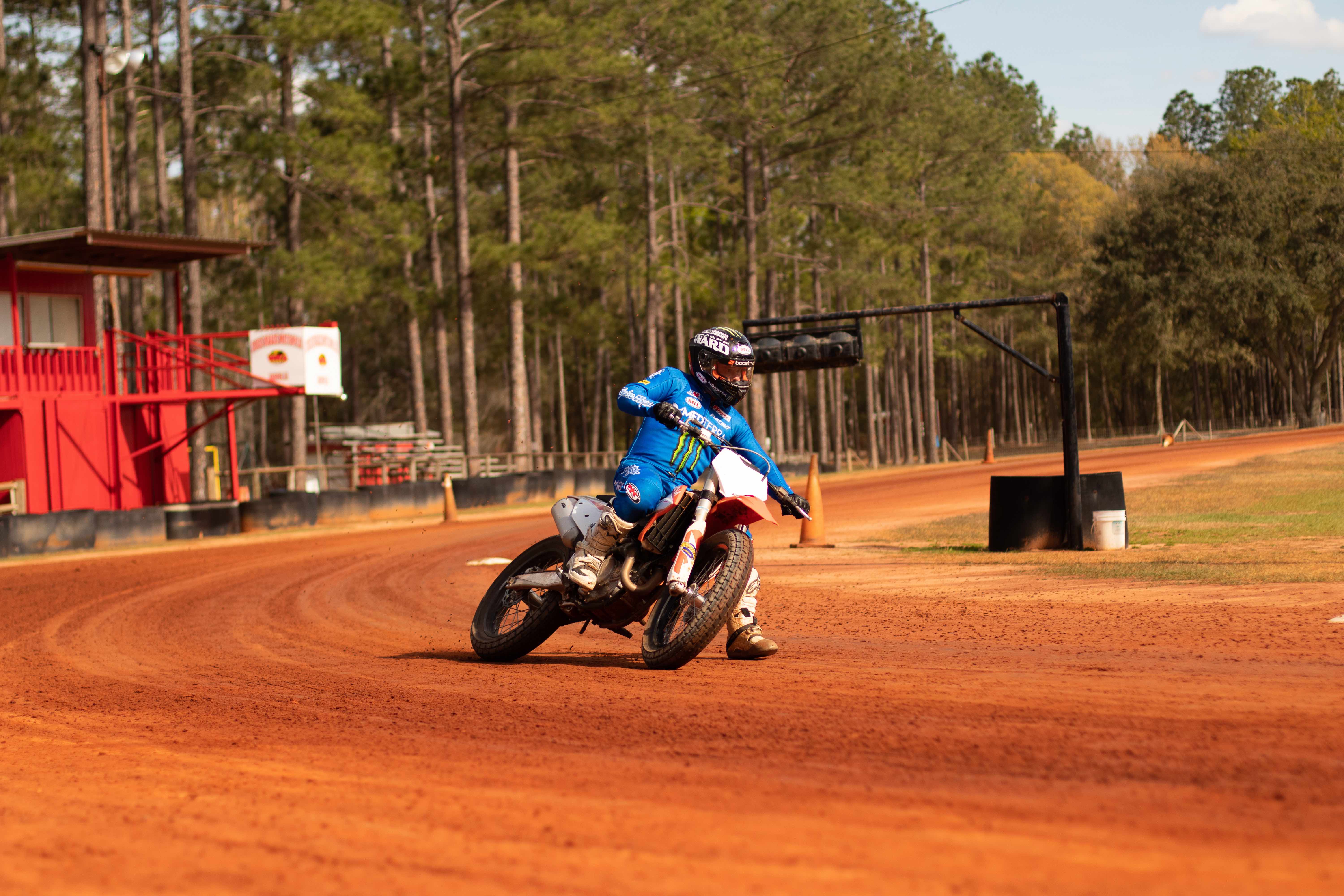 Ward training last week at one of Lewis' Moto Anatomy venues. He feels he and Lewis are pretty close to an ideal chassis setup.

Thanks to his experience and physical fitness, Wardy is confident in his abilities and chances in Thursday’s TT. Still, he knows full well he’s up against the toughest AFT Singles class in years and some of the very best riders in the country. “It definitely not going to be easy,” he says. “These guys and girls are good.”

Of course, Jeff Ward knows a thing or two about being good and going fast. He’s been at it since the early 1970s, and at this point in his storied career shows no sign of slowing down. 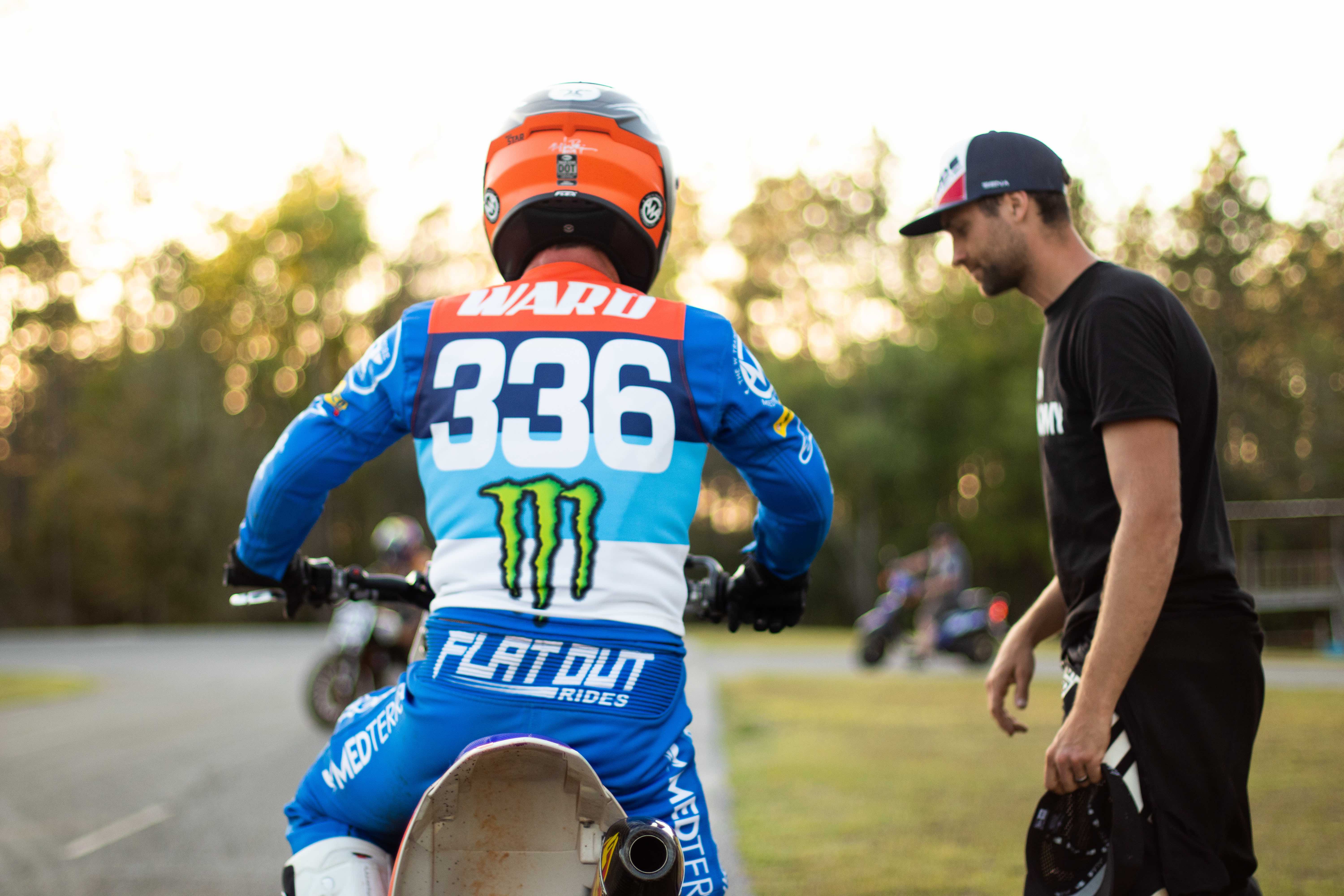