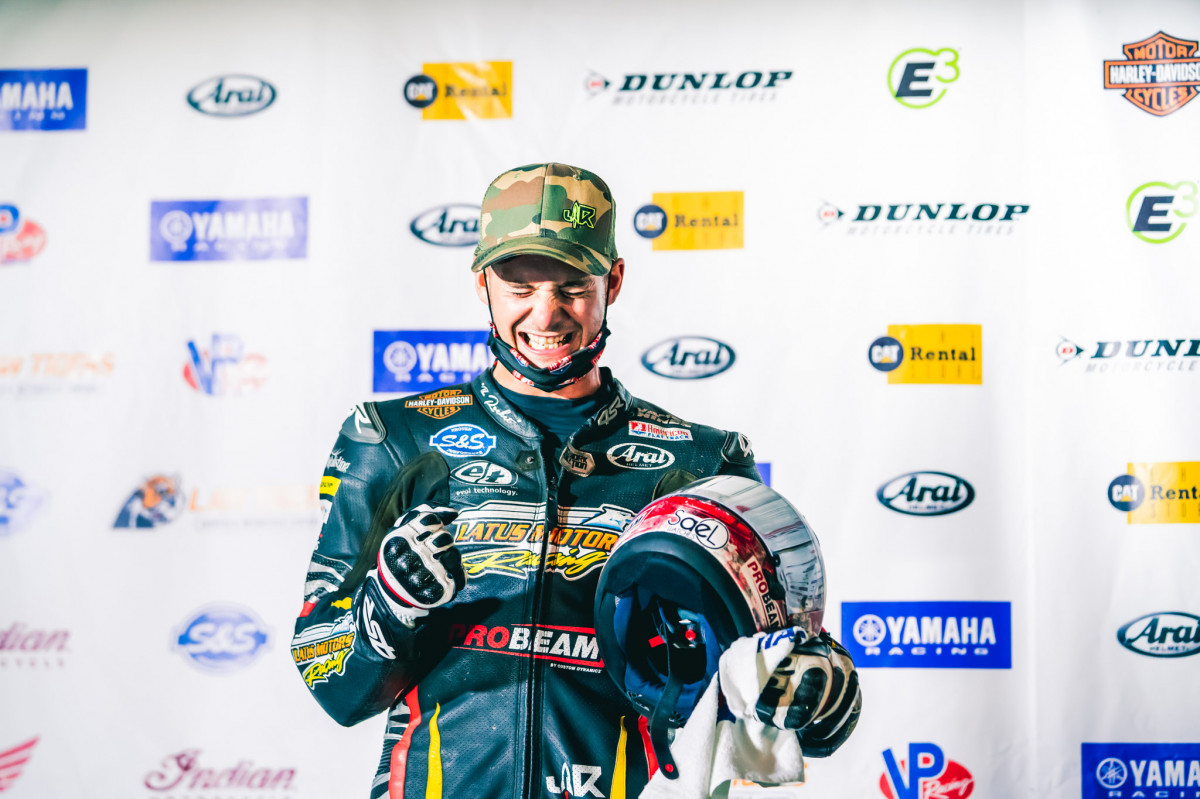 Much was made of James Rispoli’s return to the Progressive American Flat Track scene in 2019 after a decade away. Less, however, has been said of how that time changed him. 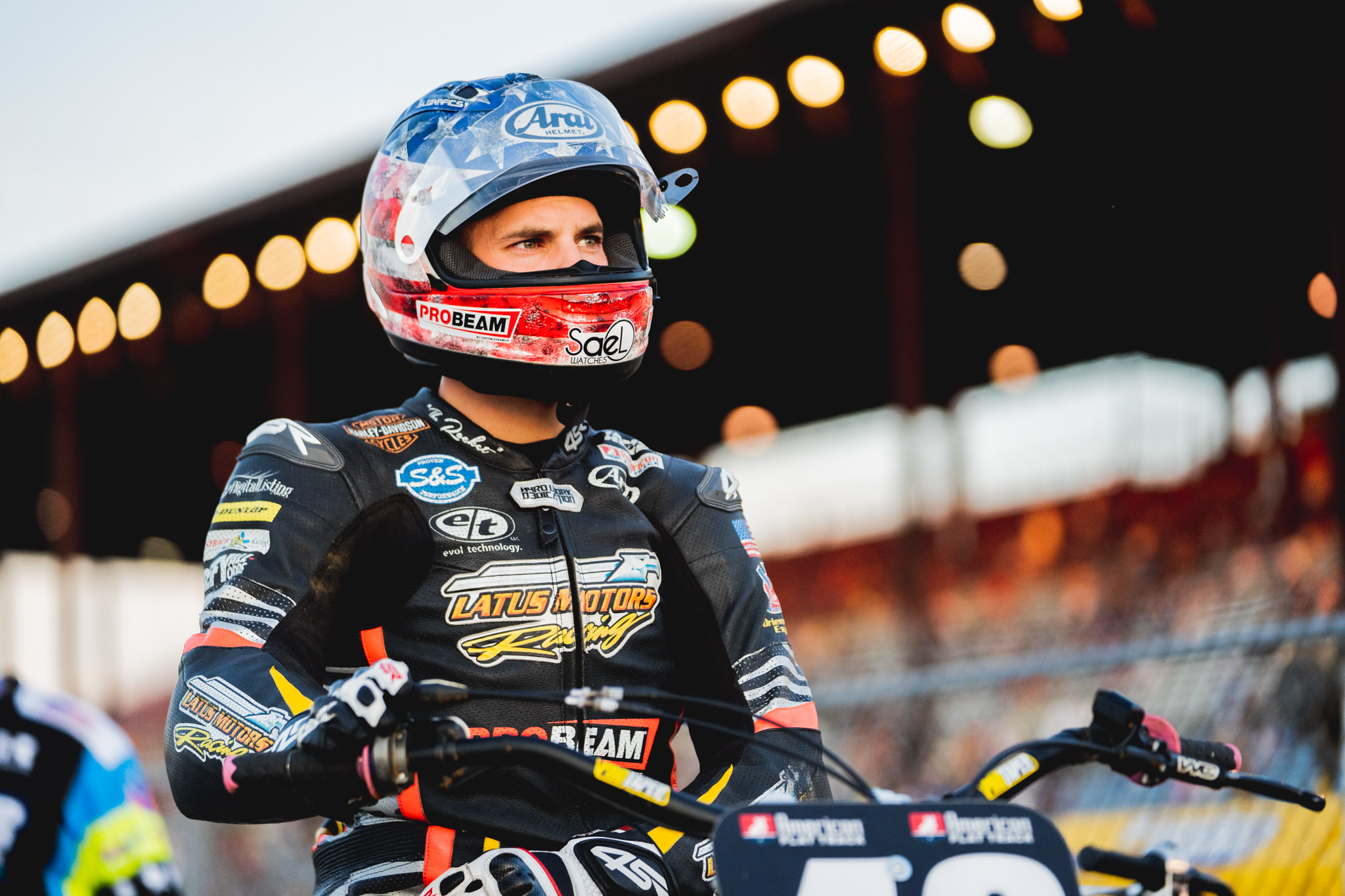 A number of Rispoli’s old rivals who still loom large in the paddock today were instantly reminded of his trademark grin and bigger-than-life personality. But that familiar infectious enthusiasm effectively masked the relentless competitor he had transformed into during a decade spent winning a pair of AMA SuperSport titles and competing overseas in the British Superbike series.

“This is the crazy thing,” Rispoli said, “until this year everybody remembered me as the 2009-2010 James Rispoli -- the happy-go-lucky kid who wasn't the best but was always there. Yeah, I won some amateur titles, but I was always like second best.

“Everybody thought that was who I am. But they forget that I went overseas in the hardest domestic championship in the world and learned. I'm still happy-go-lucky off the track, but when the visor goes down, I'm a killer, and that's what I learned over there. I think that took a lot of people by surprise.” 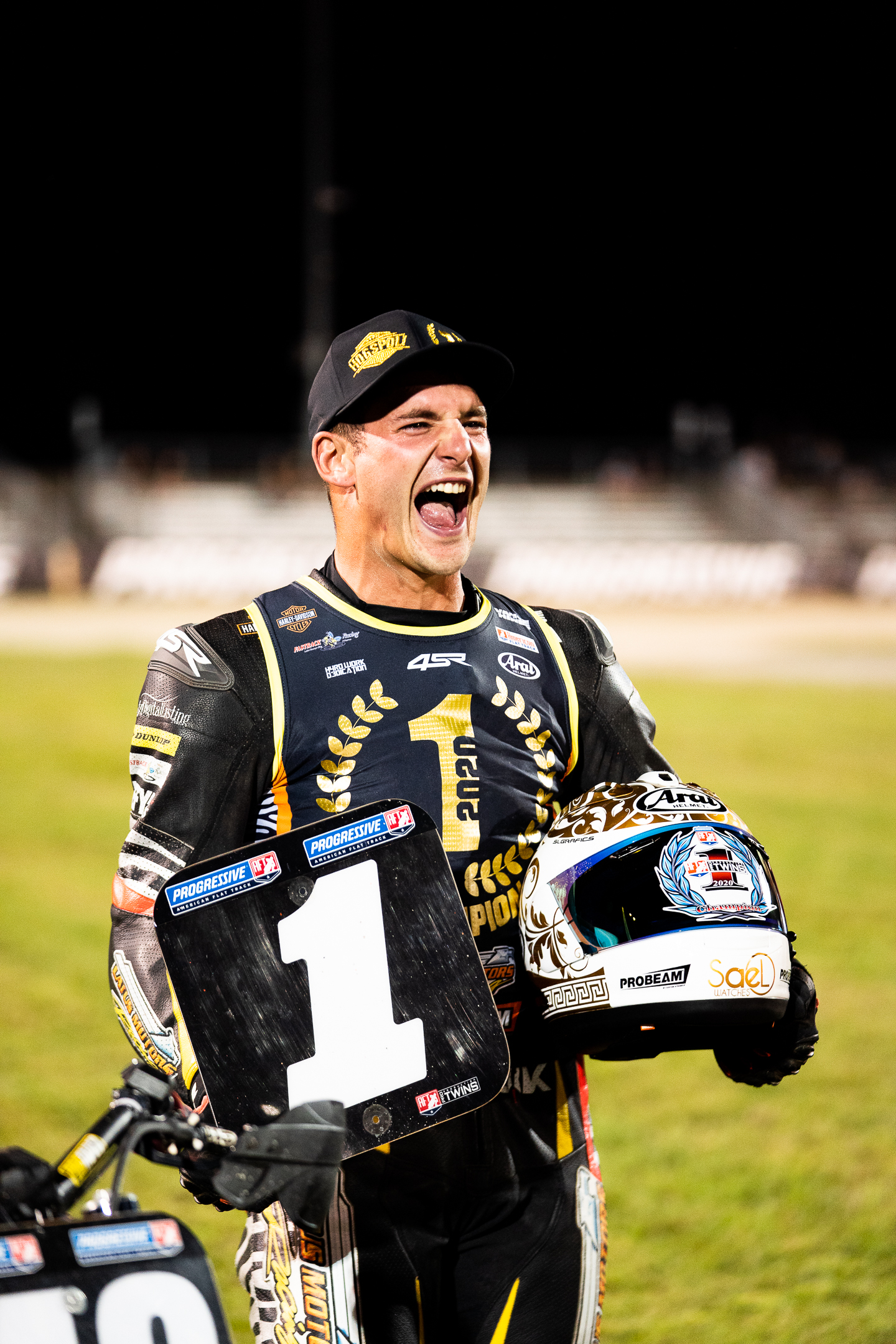 Caught by surprise or not, the AFT Production Twins field had no answer for the more hardened James Rispoli in 2020. He proved unstoppable over the course of the season, racking up seven wins and four runner-ups in just 15 starts en route to a dominant championship victory.

That title elevated Rispoli into rarefied air, joining the likes of Kenny Roberts, Bubba Shobert and Eric Bostrom as having won national championships on both dirt and pavement.

Unlike those legends, however, Rispoli earned his roadracing titles prior to dirt track, which is perhaps unprecedented. However, time may show him to be a trendsetter with other ex-roadracing superstars such as JD Beach and Danny Eslick currently attempting the same feat.

“I don't know the statistics, but a lot of people start in one series and end their career in the other. I don't know how many have ever gone from dirt track to roadracing and then came back to win a championship. That’s huge.

“I hadn't raced dirt track in ten years and won a championship in my second season back. I’m still pretty young at it, and we're racing against a lot of fast guys. I think that's got to be the coolest thing about it.”

Rispoli is also fascinated by the symmetry that connects this year’s title run to his 2012 AMA SuperSport triumph.

“I didn't think I was going to win eight races in SuperSport and it was like one after another. We were sometimes not in a place to win, but somehow we did it, and they kept coming and coming. The same thing happened this year. All the races I won were at places I thought we were going to do the worst at. Williams Grove, Atlanta...we were just up the creek, and we came out with a win. We just kept coming and coming.

“I always tell myself when you get on the wave, you have to slow down and stay on top of it as long as possible because you will fall off it eventually, and then you build up and wait to grab the next one. It's been pretty crazy. It's been a wild ride.”

Of course, 2020 has been a wild ride for pretty much everyone on this planet. Between the pandemic, the delayed season, the uncertainty that followed, the limited crowds, and the unlimited success, there is no way Rispoli will ever forget this year. 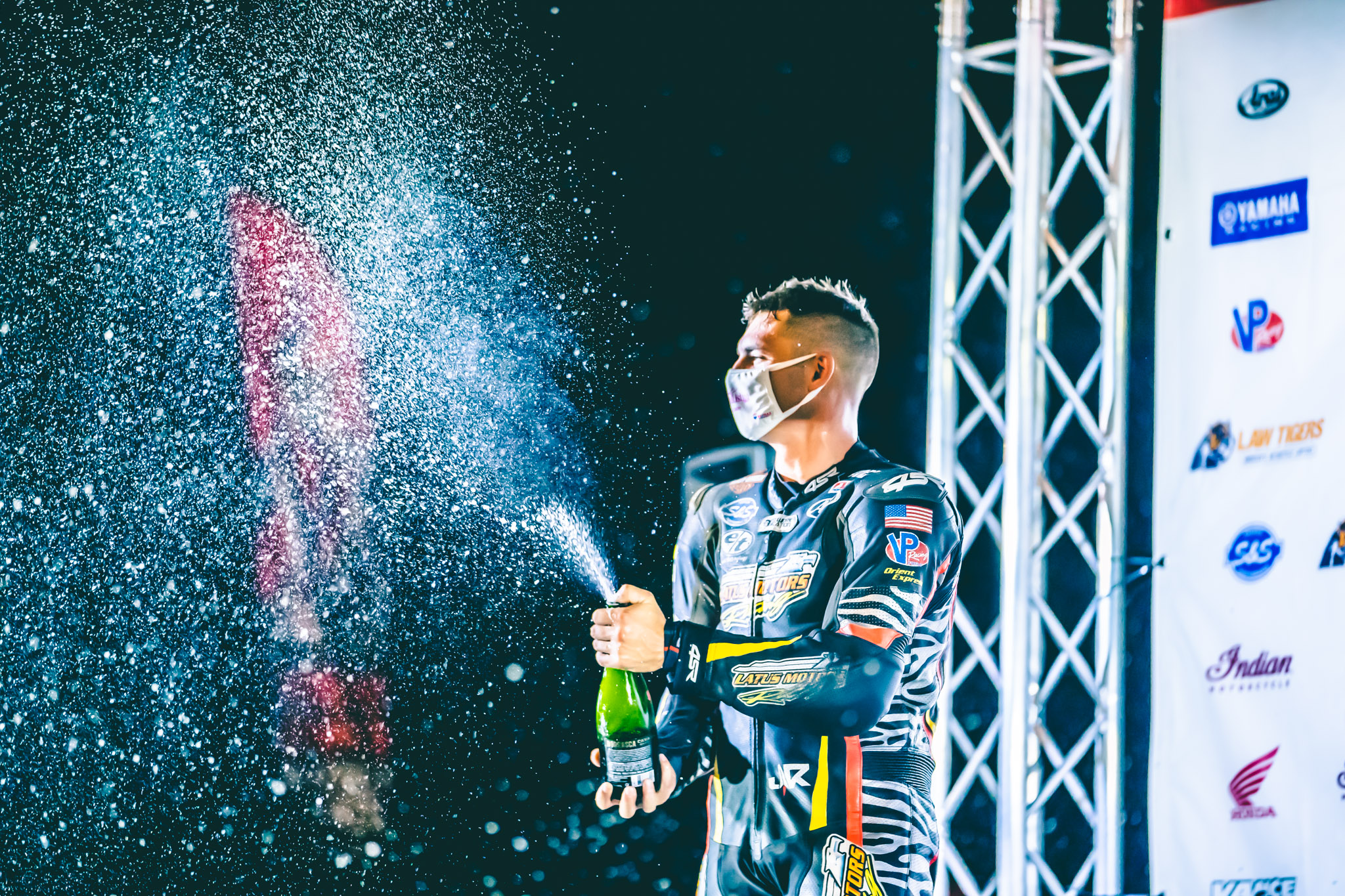 He said, “The crazy thing is, 2020 has been so horrible, and it's been the best year of my life. I went back to school and got my high school diploma. I got my real estate license. And I won a championship with seven wins and eleven podiums. 2020 will go down as a great year for me.

“On top of that, I feel the pandemic helped me while it hurt everybody else. What I mean by that is, a lot of people rolled off during the break, but I was still playing catch-up after coming back in 2019, so I continued to train as if we were racing the whole time. By the time we went to Volusia, I had thousands of laps on my Harley and two or three thousand miles on my legs bicycling.” 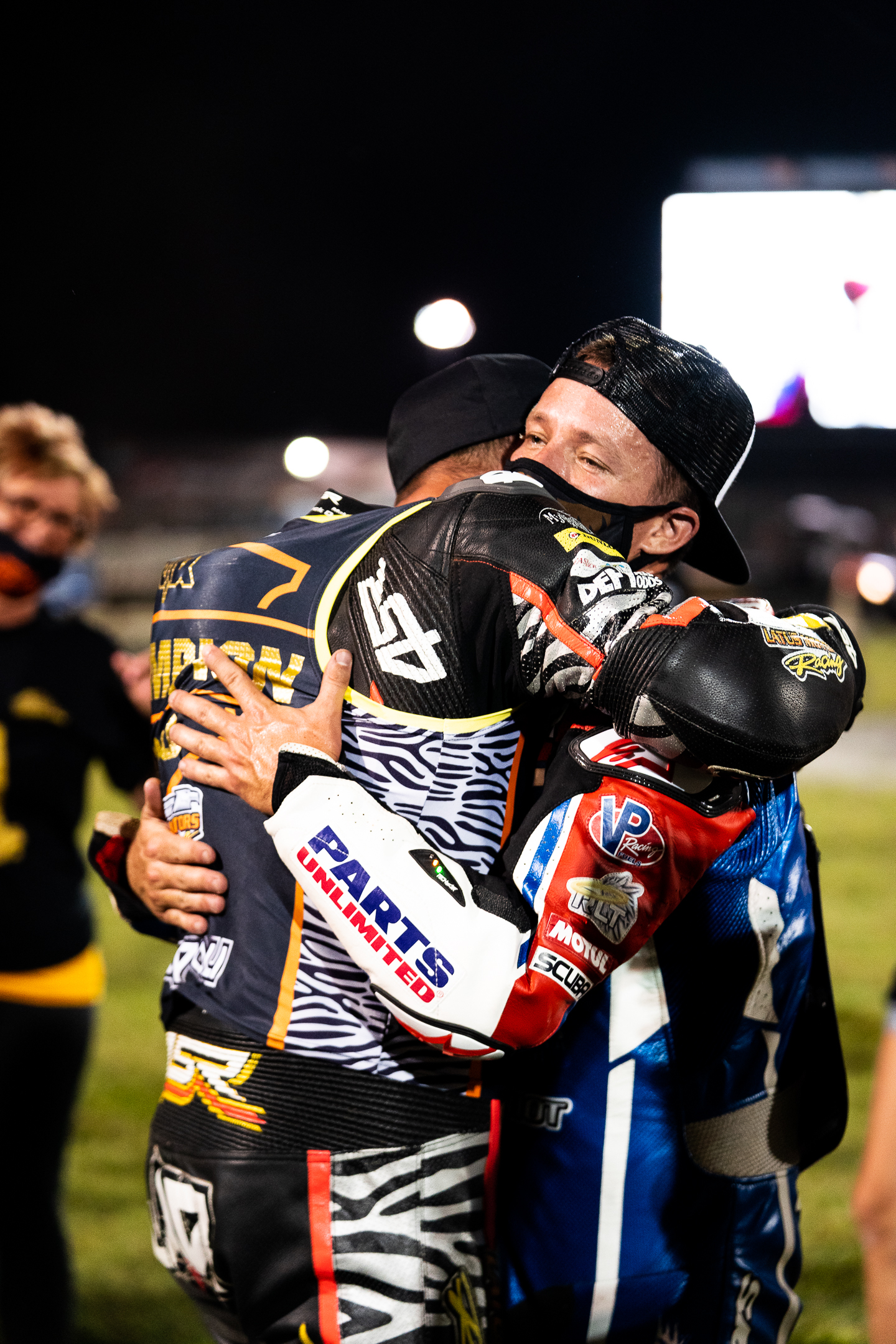 Prior to the season, Texter told AmericanFlatTrack.com that he felt, despite his status as reigning class champ, he was flying under the radar. The smart money seemed to be betting on ‘19 runner-up Ryan Varnes to scoop this year’s crown.

Rispoli admits he was initially part of that crew, but Texter’s determined title defense forced him to reassess and give credit where it’s due. Even after Rispoli ripped off five consecutive victories, Texter didn’t cave. Instead, he responded like a champion, taking three wins and three seconds over the season’s final six races, preventing Rispoli from locking up the crown prior to the Progressive AFT Finale at DAYTONA. 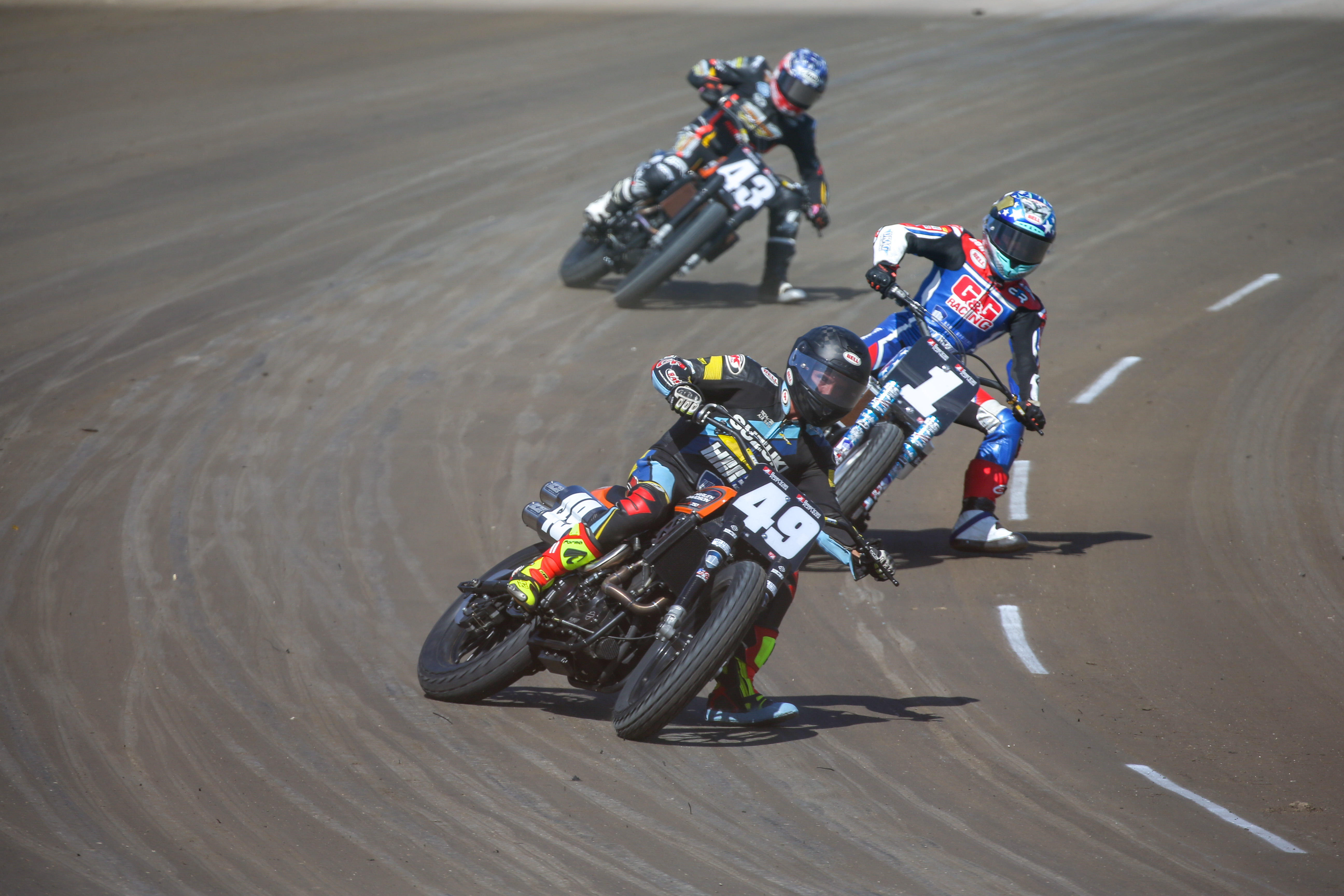 “I was very surprised and very impressed with Cory Texter,” Rispoli admitted. “After Williams Grove, when I went to his backyard and just smoked him by three seconds after he had been the fastest qualifier and won the Semi, I thought his head was done. I thought his championship was over, and I had done it.

“But even during my five-race win streak, he was always finishing second. He was always there, and then he showed up at Atlanta and kind of put me in my place a little bit. I was like, ‘Okay, buddy…’ 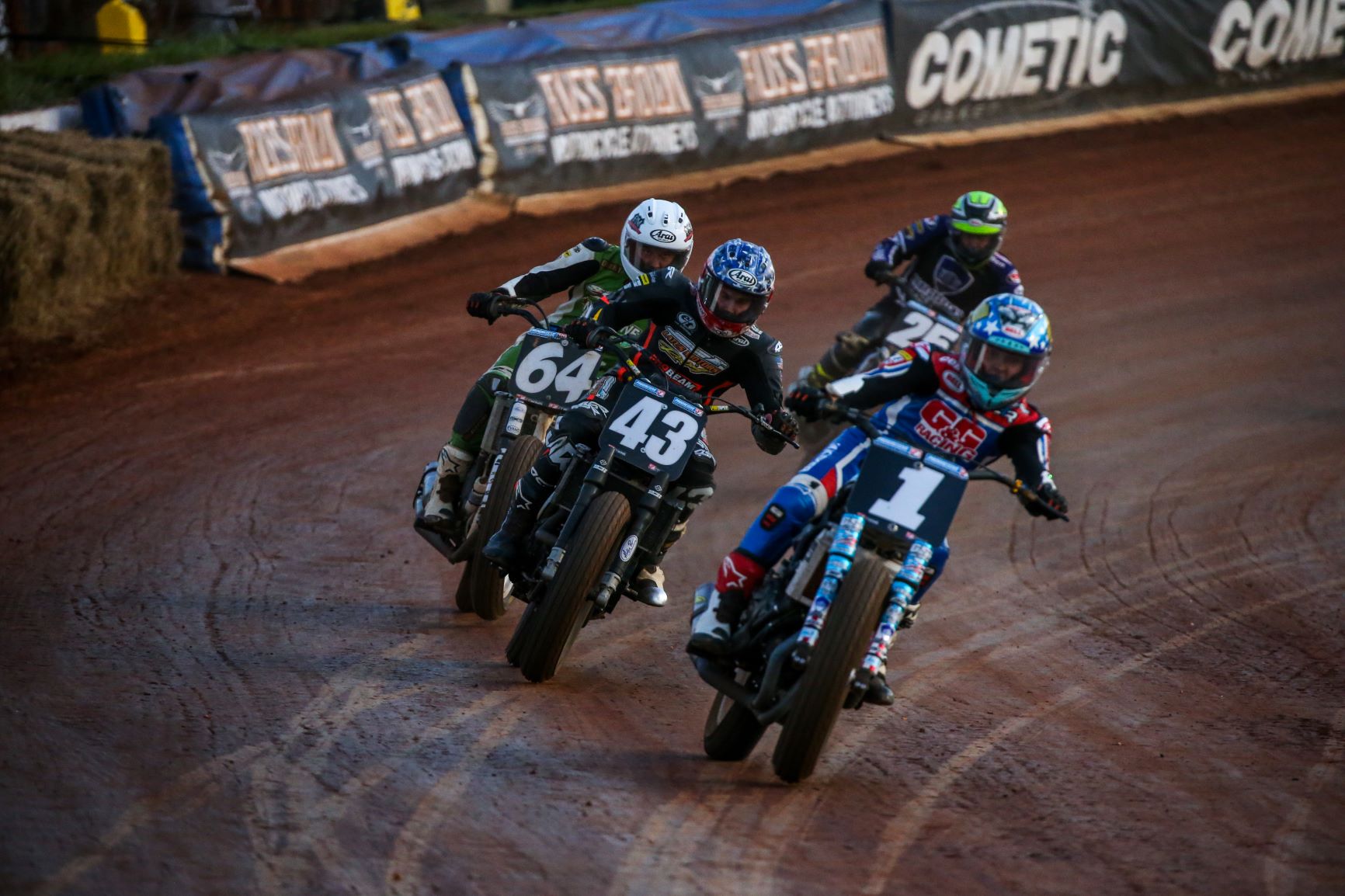 “And again, I thought after I came back and beat him the next day at Atlanta, he was done, but then we showed up in Charlotte and it was his last stand. The dude whupped my ass, like hands down. I’m like, ‘Okay, we’re taking this to DAYTONA.’

“I learned not to let that get into my head. That's why we build a points gap. But I was just super impressed, and I love that he fought.

“I want to be pushed; that's what we're here to do. That Atlanta race when we were side by side the entire race -- that's what I live for. I want to be there every race, and obviously, I want to win in the end. If we could have 18 races like that -- go to war and then have a beer afterwards -- that's the type of racing I like.”

As much fun as it could be, Rispoli has his sights set higher than an AFT Production Twins title defense in 2021. He viewed this season as his audition for an AFT SuperTwins presented by Vance & Hines seat, and (justifiably) feels he aced that audition.

“I think I did the maximum I could do to show I’m ready for AFT SuperTwins apart from winning every single race. If you look at the data, my paths were very competitive as to what they should be for a rookie in SuperTwins. Obviously, I'm a realist and know that you can't look at data and say I would have been in X position because that's just stupid to say. But the good thing is I was the fastest Harley most weekends, which is big on a production motorcycle. And I did win seven races on the bike and had something of a dominating season. That should do well for my prospects for next year.” 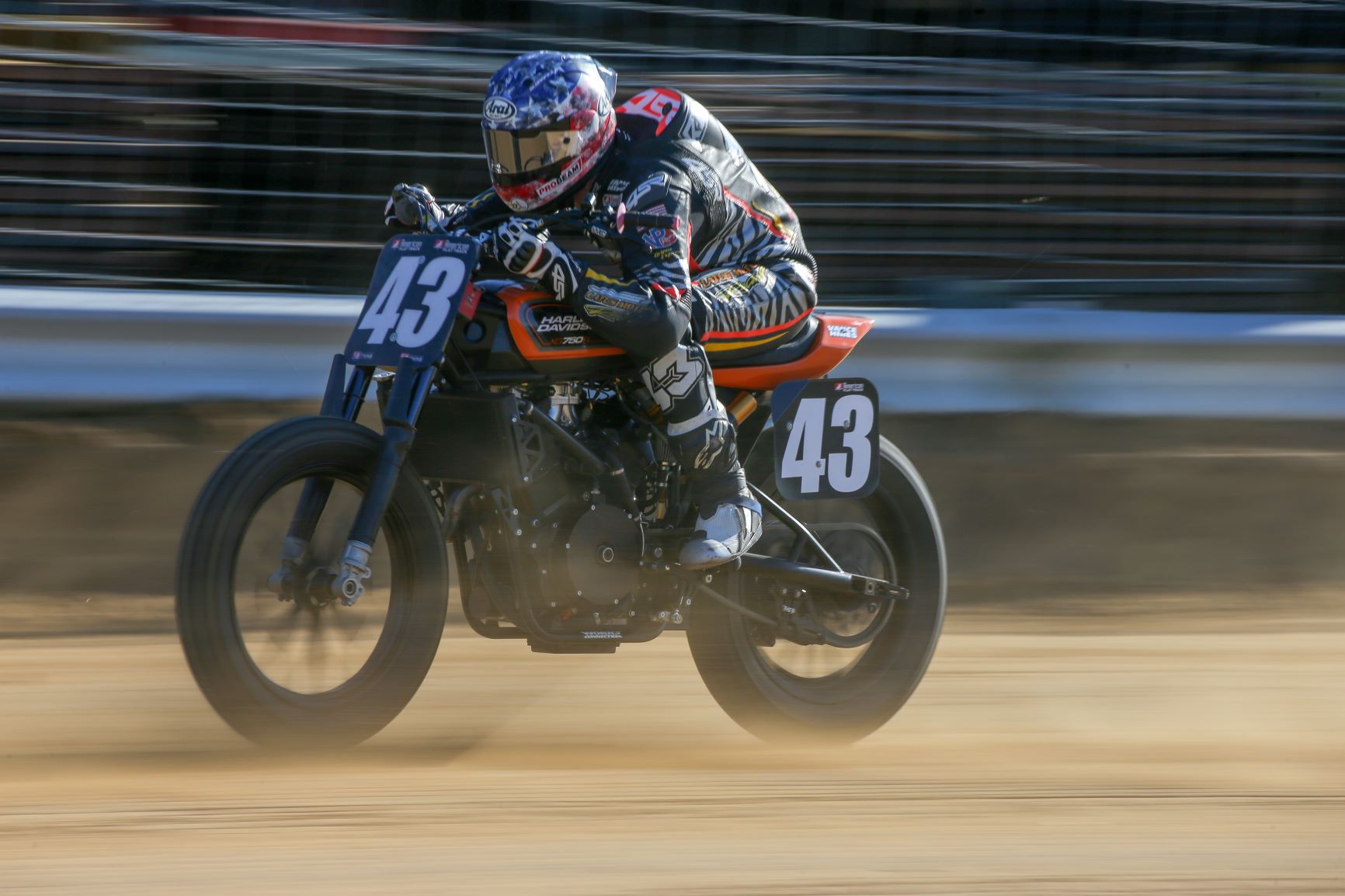 While there is no deal in place as of yet, Rispoli said he’s talking to a number of interested parties and hopes to have something concrete by the middle of November. As to where and on what...

“Just talking straight, everybody wants to be on an Indian. It's the best motorcycle on the track at the moment. Would I love to be on an Indian? Hell yeah, I want to go out and show what I can do on the same equipment as Briar (Bauman) or Jared (Mees). I’d like to see where I stack up.

“But we don't live in that world today, and sometimes we've got to go grab life by the horns and create something that's not there.”

What’s not there is a satellite Harley-Davidson effort that could potentially help the once-dominant manufacturer return to its former glory by providing additional talent, data, and solutions in the quest to develop the XG750R into a world beater.

The Latus Motors Racing squad, under Joe Kopp’s watch and with Rispoli at the controls, appears well suited to move up a weight class. 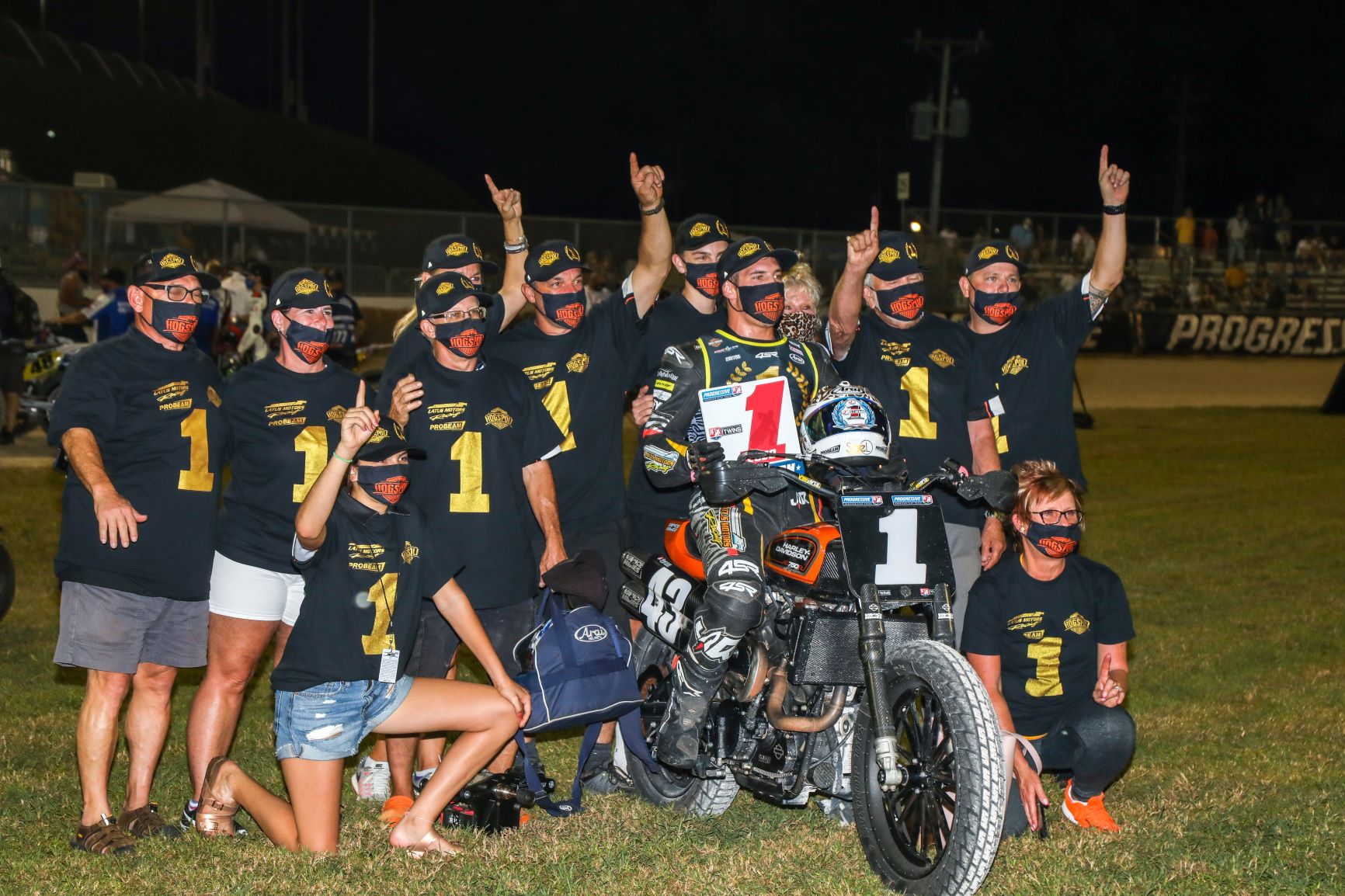 “I'd love to step up with my team,” Rispoli confirmed. “I think if we could put another Harley on the grid with different heads and a different approach than Vance & Hines, that would only bode well for the entire Harley program.

That uncertainty didn’t stop Rispoli from brainstorming what would need to happen in the event that it did.

He said, “We'd have to go and have the best winter offseason Harley has ever seen to make this motorcycle fully competitive for next year.

“If I had the deal tomorrow, I'd say let's test next week. We’d need to be on the test track as early as possible, and we would need to be identifying problems with the AFT SuperTwins bike so we could figure out how to fix them uninterrupted. 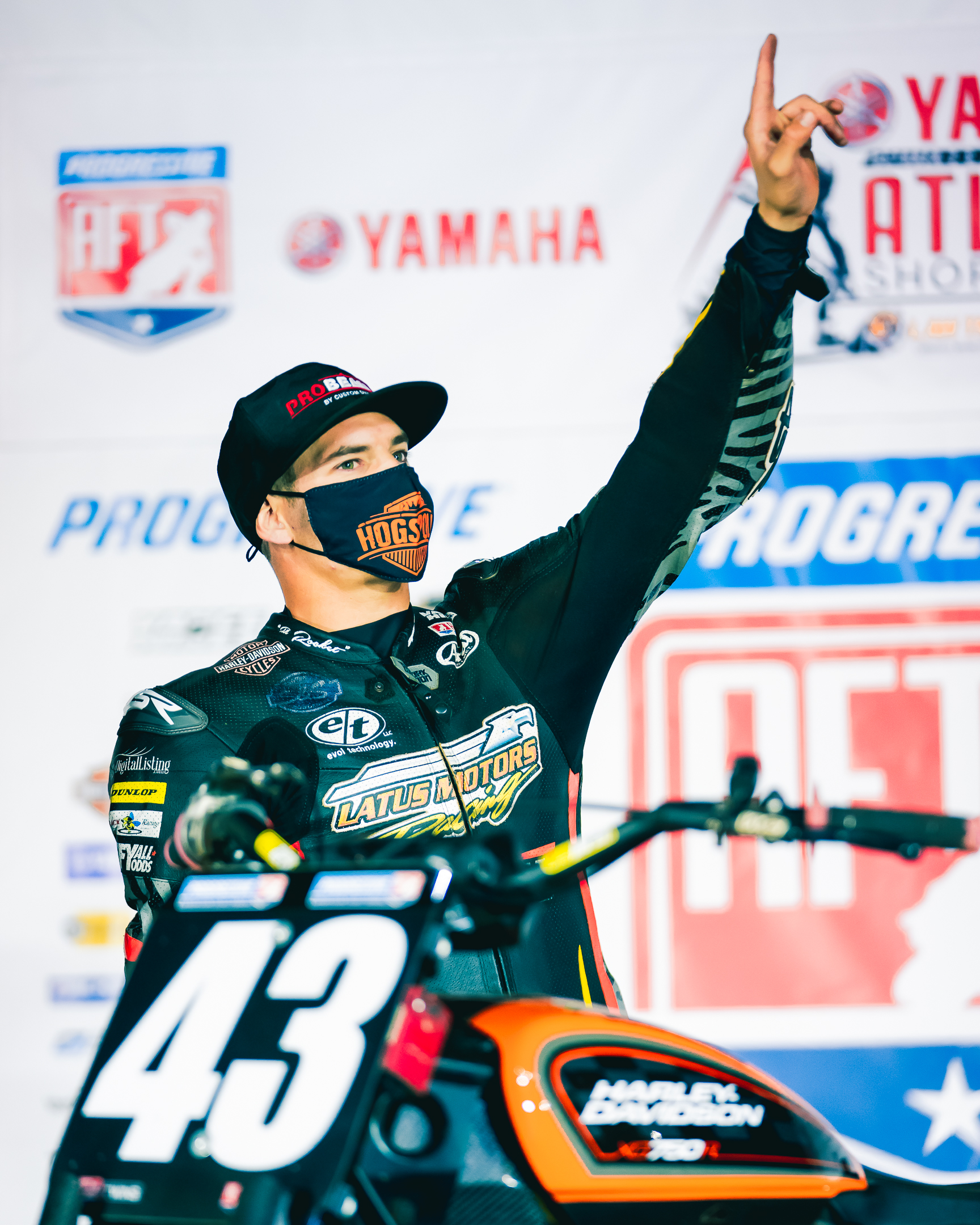