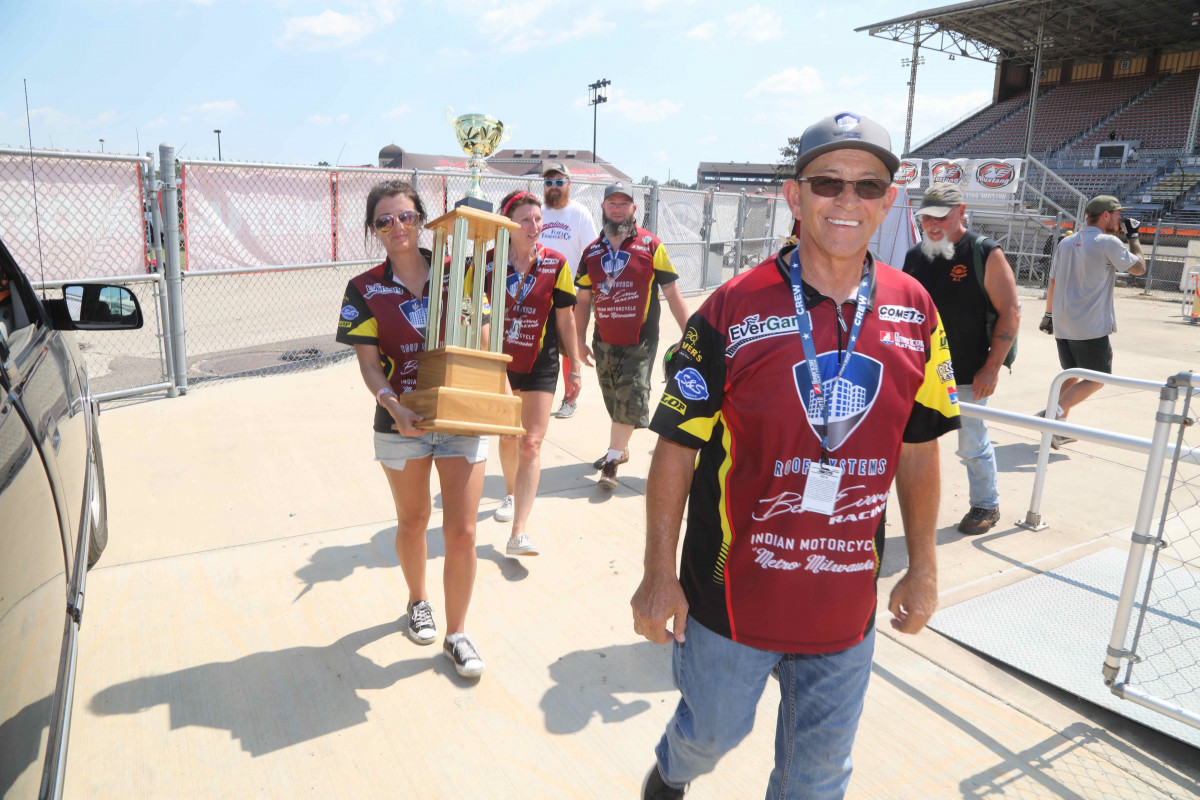 If you ask him, Roof Systems CEO Jerry Stinchfield will tell you this:

“It’s pretty simple,” he’ll say. “I love these kids and I love the sport of flat track, having ridden and raced growing up. I’m fortunate that my business has been pretty successful, and if we can help some of these kids realize their dreams, and it keeps the Roof Systems name out there, I’m all in.”

If any single individual in the professional flat track orbit is truly all in, it’s Jerry Stinchfield. In 2019, the guy will support a total of nine AFT pros, seven on his Roof Systems JCS Racing team and two more in the Red Bull KTM Roof Systems camp. What’s more, he’s purchased four high-end large-capacity haulers for these various teams and riders to work and live in.

And if that’s not enough, Stinchfield is also the entitlement sponsor of American Flat Track’s AFT Singles class – which will be known during 2019 as the ‘Roof Systems AFT Singles presented by Russ Brown Motorcycle Attorneys’ class.

That’s not only a ton of money and support, it’s also a huge commitment.

Stinchfield, much like Estenson Racing’s Tim Estenson, represents a new breed of sponsor in the American Flat Track ranks: The ultra-successful businessmen with a fierce connection to and love for the sport of flat track, and a burning desire to help both top-level and up-and-coming riders reach their potential.

For Stinchfield it’s much more than just positive exposure for his business. It’s personal.

“I grew up poor and know how it is for a lot of these kids,” Stinchfield says. “Scrambling for gas money and tires for the next race… Sleeping in their vans. It’s hard for them, so I help where I can.”

Stinchfield’s strong connection to the sport, and his firsthand knowledge of the struggles many young racers experience as they come up through the ranks, reaches back to his childhood in the ’60s and early ’70s, when guys like Dick Mann, Gary Nixon, Mark Brelsford and others ran on the dusty dirt tracks of America’s heartland, and were heroes to untold thousands.

“Beginning when I was five or six years old,” Stinchfield remembers, “my Dad would put me on his motorcycle – sometimes on the fuel tank because I was so small – and we’d ride to the races all over the Midwest … Indy, DuQuoin, Terre Haute … and see all the greats, guys that became my heroes. We went just about every weekend, to the big races to see the big boys, and to local dirt track events, too. It was just something I grew up with.

“I worked early-on,” Stinchfield says, “helping my Dad on roofing jobs, cutting grass, hanging wallpaper. He was a hard worker, making wages, supporting his family. He always said, ‘if you wanna play you gotta work,’ and, ‘I’m teaching you a trade, one you’ll always be able to use in life.’ He was right, as I spent a lot of years up on roofs. It was hard work, a struggle at times. But it helped me find my way.

“My first bike was a Yamaha 90,” he adds. “Paid $300 for it, I think. I ended up racing for some years when I got older, scrambles and dirt track and, later, motocross. We’d go Friday and Saturday nights and then on Sundays with my dad and my uncle Daryl, who was a pretty good racer himself. Went all over the Midwest in an old four-cylinder post office truck and had a blast even though we didn’t have much money. I wasn’t very good, but I enjoyed the adventure of it all, and more importantly, I learned to love motorcycle people. True individuals. Love ’em to this day and surround myself with them when I can.”

A bad hip, a degenerative condition Stinchfield was born with (and had fixed surgically just recently), helped derail his early racing career, but not his drive to succeed, which over the decades helped transform a small roofing business into a much more successful venture many years later.

During those interim years Stinchfield kept riding and racing, doing some cross-country racing and amateur flat tracking in the ’80s and ’90s, helping out with Terry Poovey’s GNC effort with his dad, and sponsoring a young racer by the name of Cody Humphrey. The internet and AFT’s FansChoice.tv live-stream coverage reacquainted him with the professional side of dirt track racing, and that ended up providing the pathway to his current position as team owner and supporter of many. 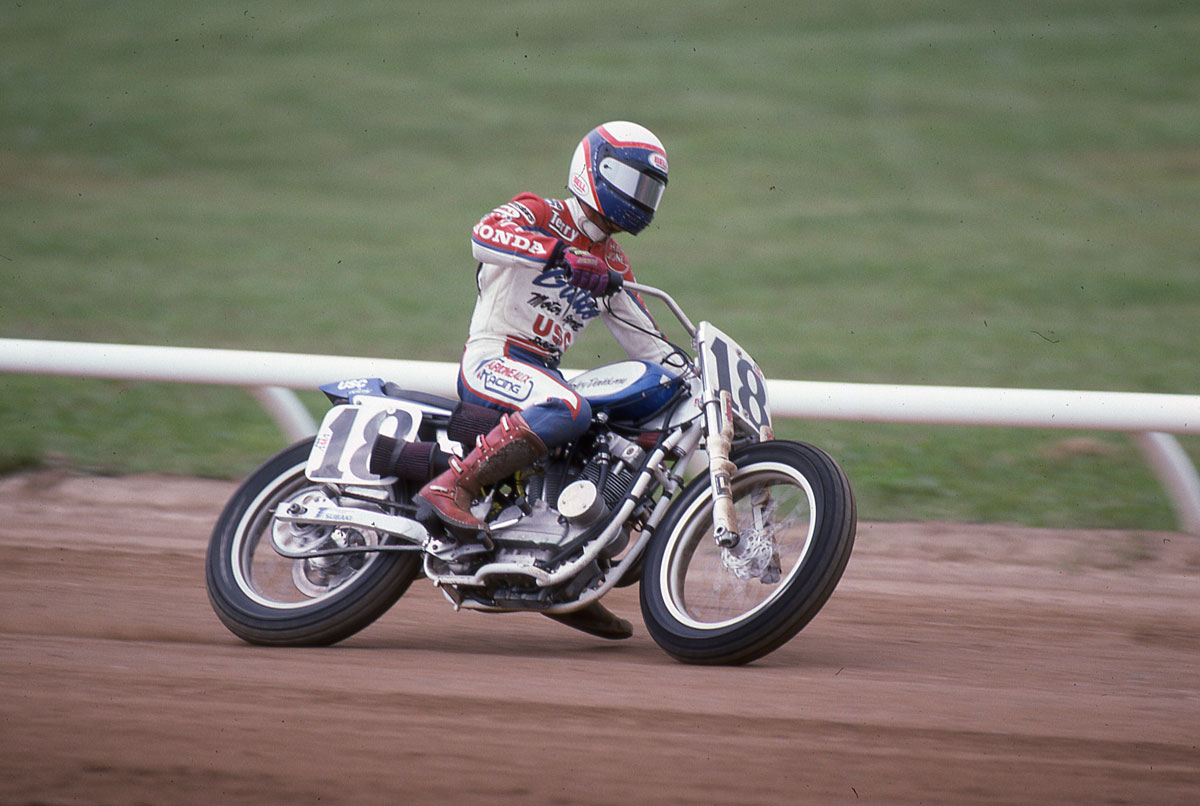 Stinchfield and his Dad helped national number 18 Terry Poovey in his quest for a national championship during the early 1980s. Poovey Archives.

“The FansChoice thing was huge for me. I’d still go to races on occasion, but the live stream stuff had me glued to my computer on Saturdays, and it really revved me up about American Flat Track again. My involvement with Terry Poovey’s program with my Dad back in the 1980s was great, and I missed being involved at that intense, in-the-paddock level. Those memories, the immediacy of the live-steam broadcasts, and the competition and great riding I saw … well, that’s what got me thinking about actually helping a rider or a team early on.”

One example of great riding Stinchfield saw was that of Kevin Stollings in the first half of 2017. Stollings started the season off with a win, three poles, two runner-ups, a third, and led the most laps in three different races. 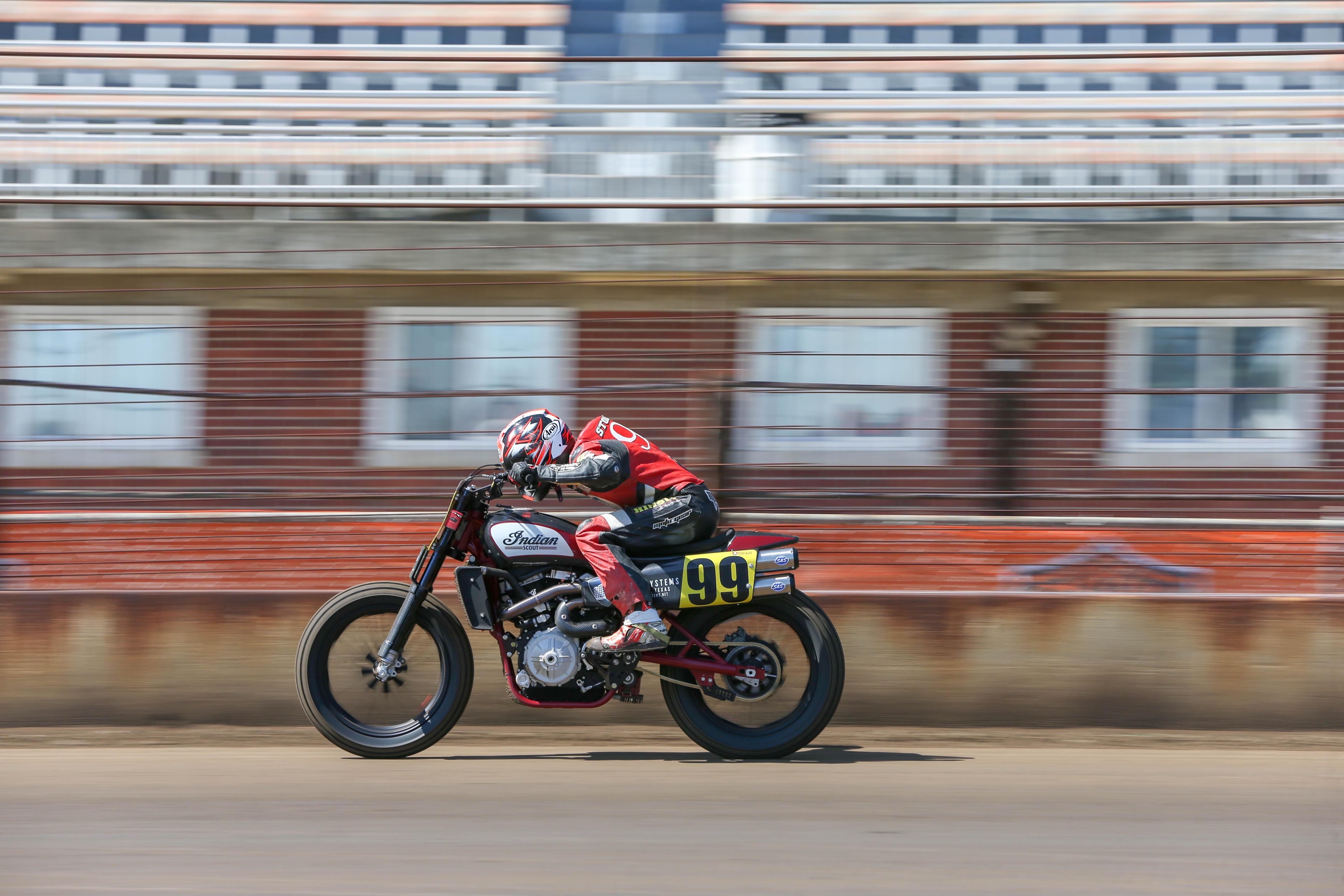 “Kevin Stollings was lighting it up in early 2017 as a rookie professional,” says Stinchfield, “so I called him up right before the Calistoga race, which was round 11, I think, and we had a little talk. I asked if he had any sponsors, and he said no – just his Mom and Dad. I asked if he could use some financial help and he said, ‘I sure could!’ We talked for a while more and I found that both his bikes were broken and needed repairs. I offered to send him some money and asked what he could do with it. He said he could fix his motorcycles properly and that it would make things a lot easier. So I did, and then flew to Calistoga to watch. He won his heat and got sixth in the Main. He did pretty well during the last several races, too, scoring a second win at Williams Grove and grabbing another podium.

“I met Brandon Price at Calistoga, too, and he got second that day with a great ride, and with that great big smile inside his helmet. I also struck up a conversation with Jeffrey Carver Jr., a total character and one of the nicest kids you’ll ever meet. These three formed the core of my initial support group in AFT, and it just kept building from there.” 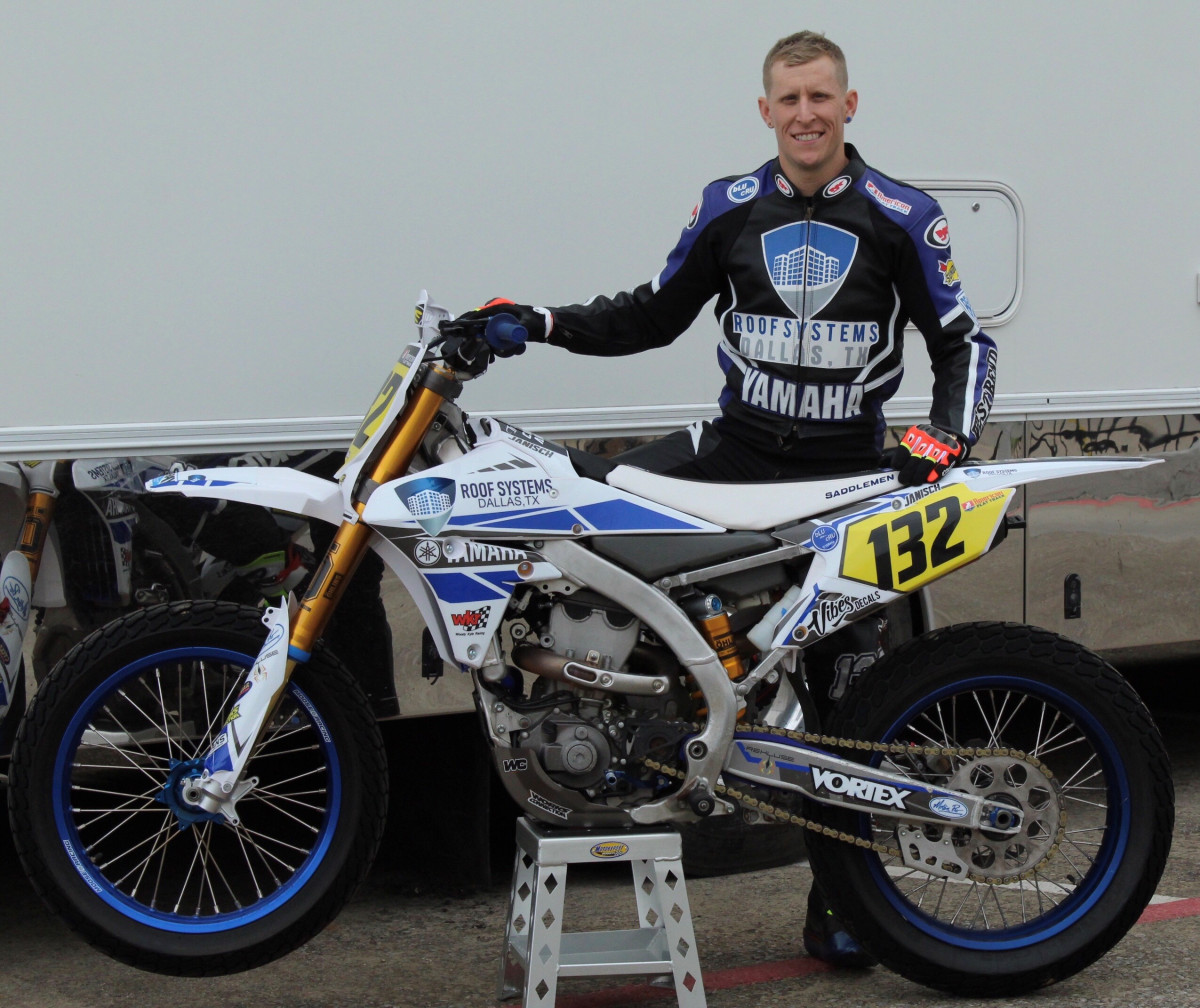 Jesse Janisch, who's leaner and stronger than he was in 2018, will lead the Roof Systems AFT Singles team in 2019. He's got experience and speed, and will be tough to beat, especially on TTs and Short Tracks. He'll partner with Brit Oliver Brindley and newcomer Trent Lowe.

Stinchfield brought Jesse Janisch on board early in 2018, and then met Shayna Texter at the Dallas Supercross with American Flat Track CEO Michael Lock. “The three of us had a great talk and I worked out a deal with Shayna that very evening at dinner,” remembers Stinchfield. “I had watched her ride for a long time and had always been impressed with her skills, and she was also friendly and professional in person. Both she and Jesse had great seasons in 2018, with wins and podiums. Jesse is fantastic, and I just love Shayna, too. I think of her almost as a daughter!”

Stinchfield shared great success with Carver Jr. as well in 2018, with a huge win at the first Springfield Mile race, four runner-ups, two thirds and fourth overall for the season. “Jeffrey reminds me of the ’70s,” says Stinchfield, “that era, that type of flat track racer. He’s got this grittiness, this ‘this is who I am, if you don’t like me, tough’ attitude. He’s just good people. Same thing with his tuner and friend Ben Evans. Ben is great guy. Totally dedicated to Carver, and really, really good at what he does.” 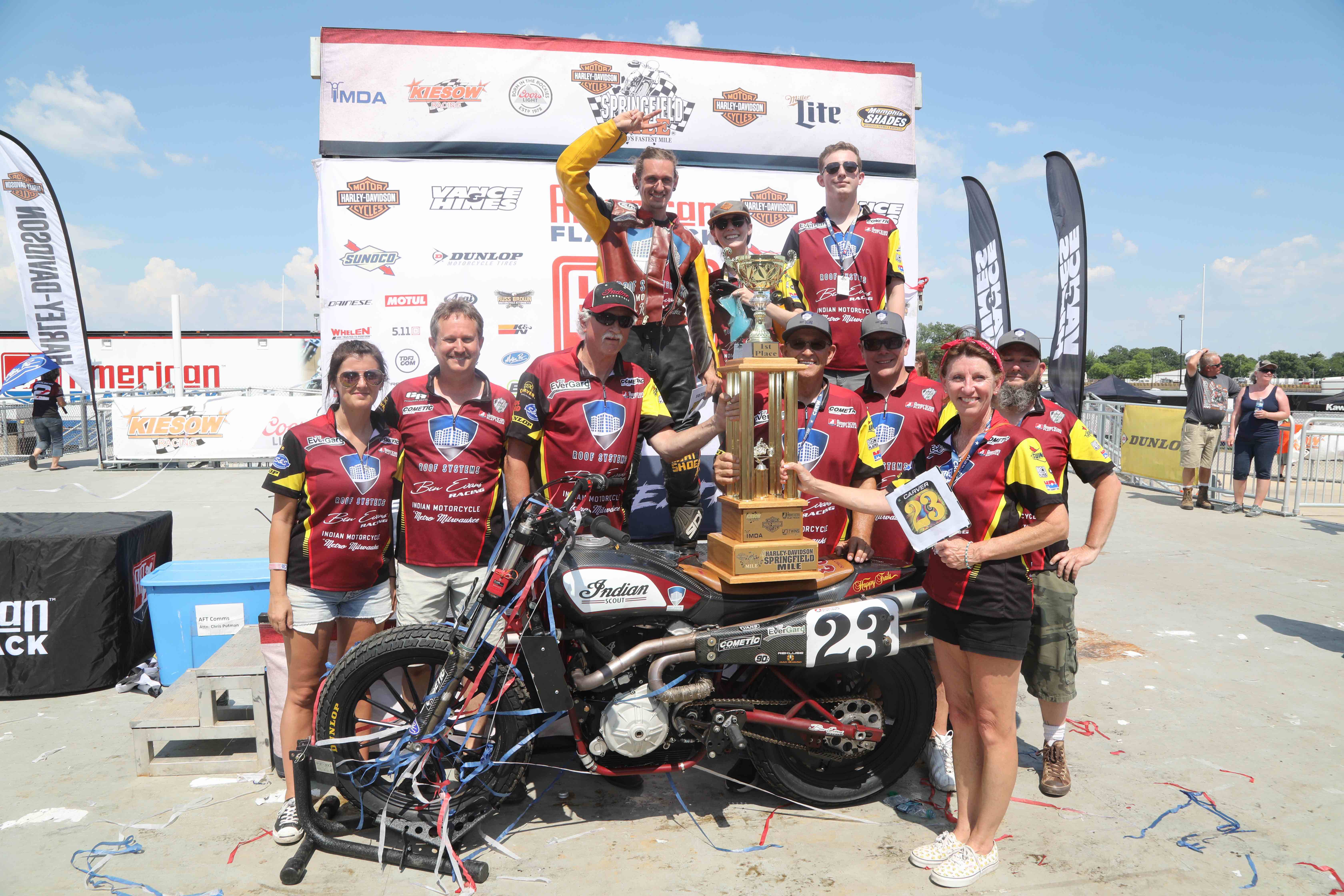 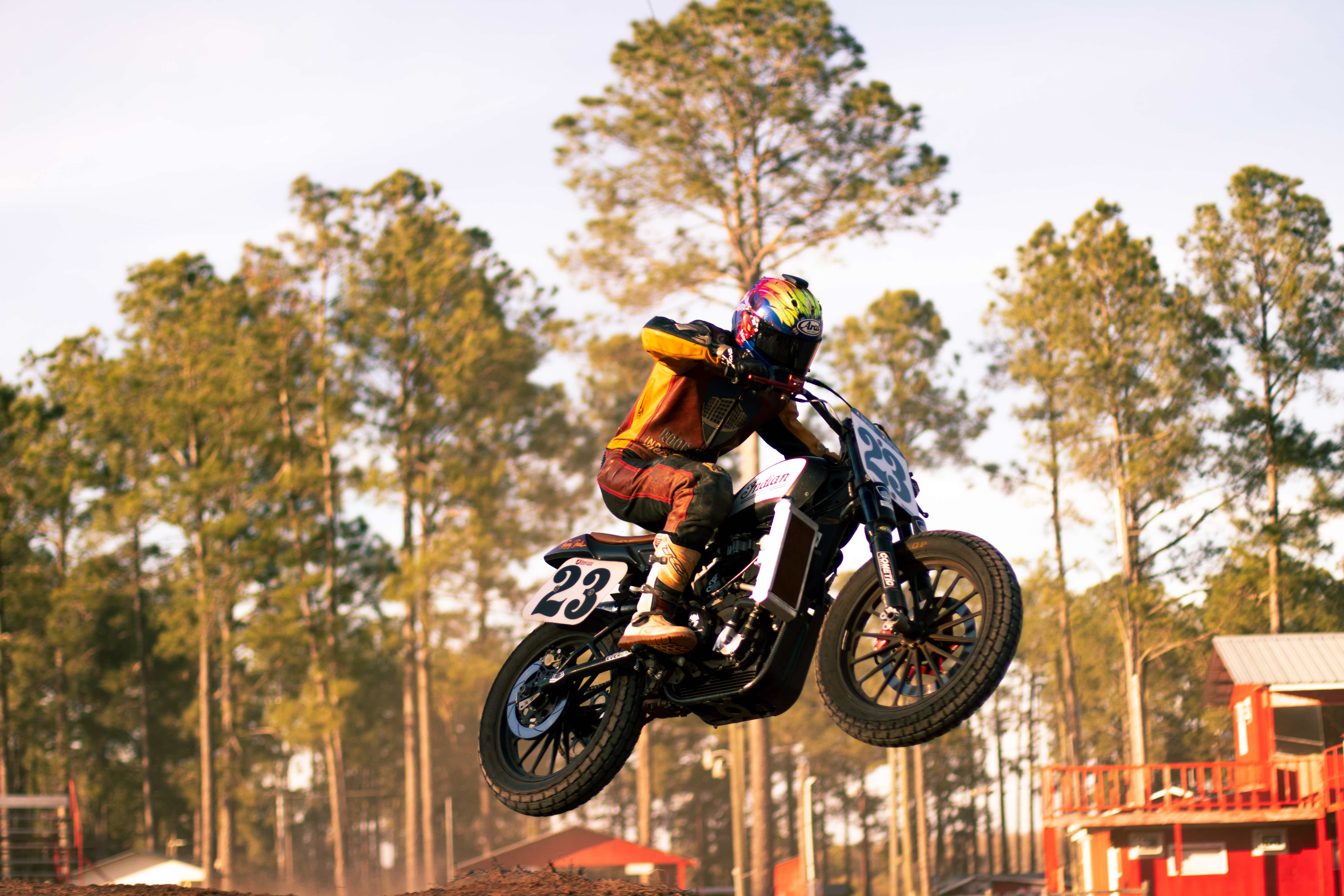 Carver Jr. agrees. “When Jerry and I met it just all came together,” he says. “From then on it’s always been good energy. The three of us formed a good friendship. I think that’s the most important thing. We laugh. We have fun. We’re excited. Jerry knows we’ll do our best. It’s great to have somebody like that on my and Ben’s side now.”

“This team means the world to me,” says Stinchfield, “and we’re all very excited about the season. We’re gonna look great, too! Six of our riders will be in identical Roof Systems leathers riding nearly identical Roof Sytems motorcycles and working beneath identical Roof Systems canopies. The scale of it is huge, and it shows a massive effort on our part to seriously upgrade the look and feel and impact of our paddock presentation. It’s something Michael Lock and I have talked about, and I’m doing my part to help. 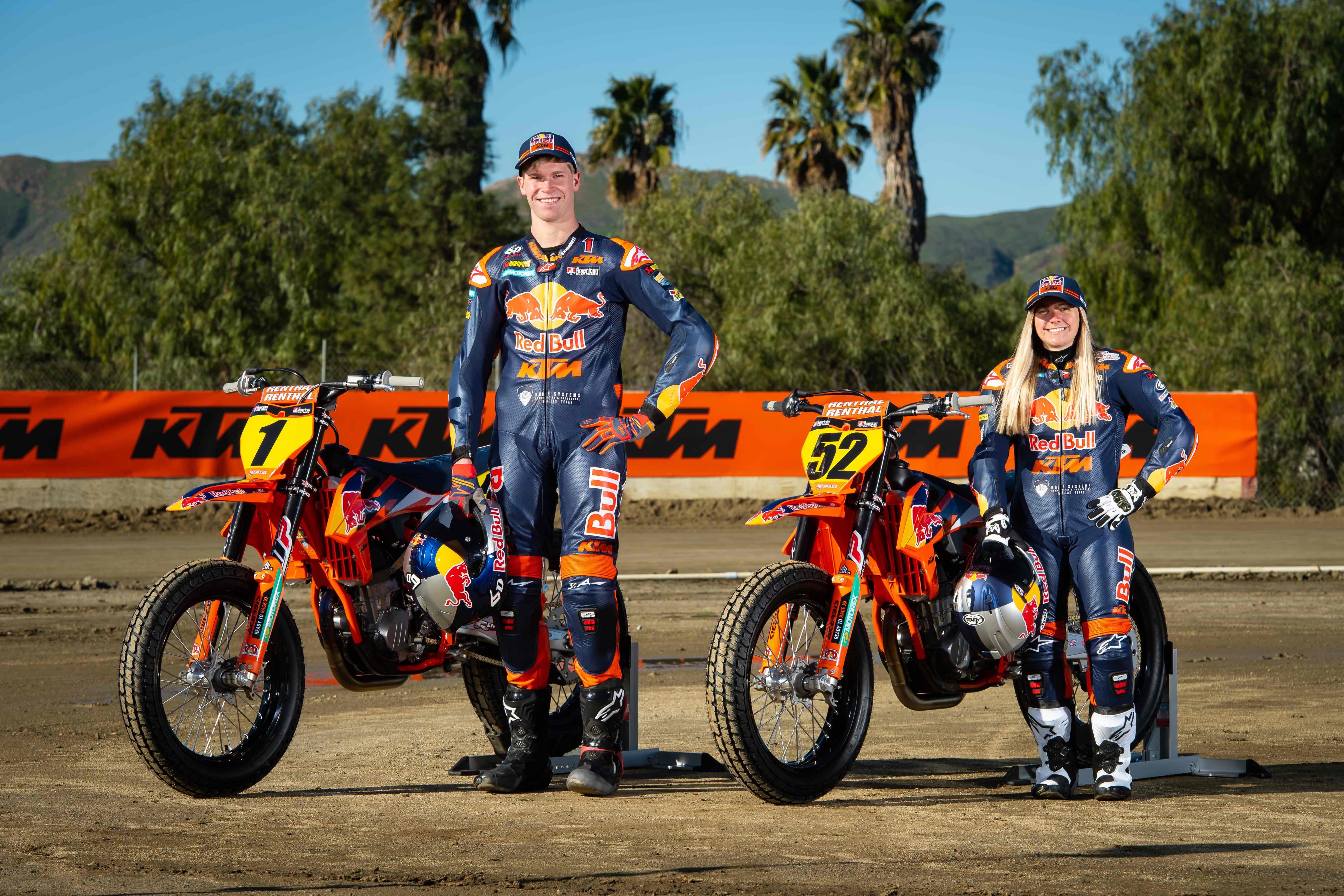 Stinchfield's support goes beyond his own Roof Systems team, as he'll also back Red Bull KTM's Dan Bromley and Shayna Texter in 2019.

“Of course,” he adds, “I’m helping Shayna again this year with KTM and Red Bull, along with Dan Bromley. Their new hauler is bad-ass, and I’m very excited to provide it and be part of that group. I mean, we’re talking Red Bull and KTM and Roger DeCoster here! It doesn’t really get better than that. I’m a big Formula 1 fan, and Red Bull is a big player there, and I’ve been a Roger DeCoster fan since I was kid racing motocross. I’m just so excited to be connected to all these folks; they are class acts.”

Excitement. Riders. Racing. Motorcycle people. Folks. Sense a common thread here? Jerry Stinchfield is a people person, and good motorcycle people get him riled up and excited about racing.

“I really do like to surround myself with characters and good people,” Stinchfield says. “I have a crazy job at times. It’s usually insane, and pretty stressful, and the best release I know of is to hop on a plane and go racing with these guys and gals on the weekends!

“I’m happy we have Harley-Davidsons and Indians involved, as they’re the big boys. I get that, and it’s all good. But the Estensons and the Yamahas and the Howertons –  and now the Stinchfields and Roof Systems, and the Red Bulls and the KTMs – are having as big an impact, and I’m very proud that guys like Tim [Estenson] and Ricky [Howerton] and myself are doing this. We’re helping bring the sport back to life with team and individual rider support.

“This ain’t about me,” he adds, “but I’m loving what we’re doing. My kids think I’m insane. My son is my accountant, and when he tells me how much money I’m spending with all this, I just tell him I don’t wanna talk about it. [Laughs.] I see the complete picture here, all of it, every last bit of it.”