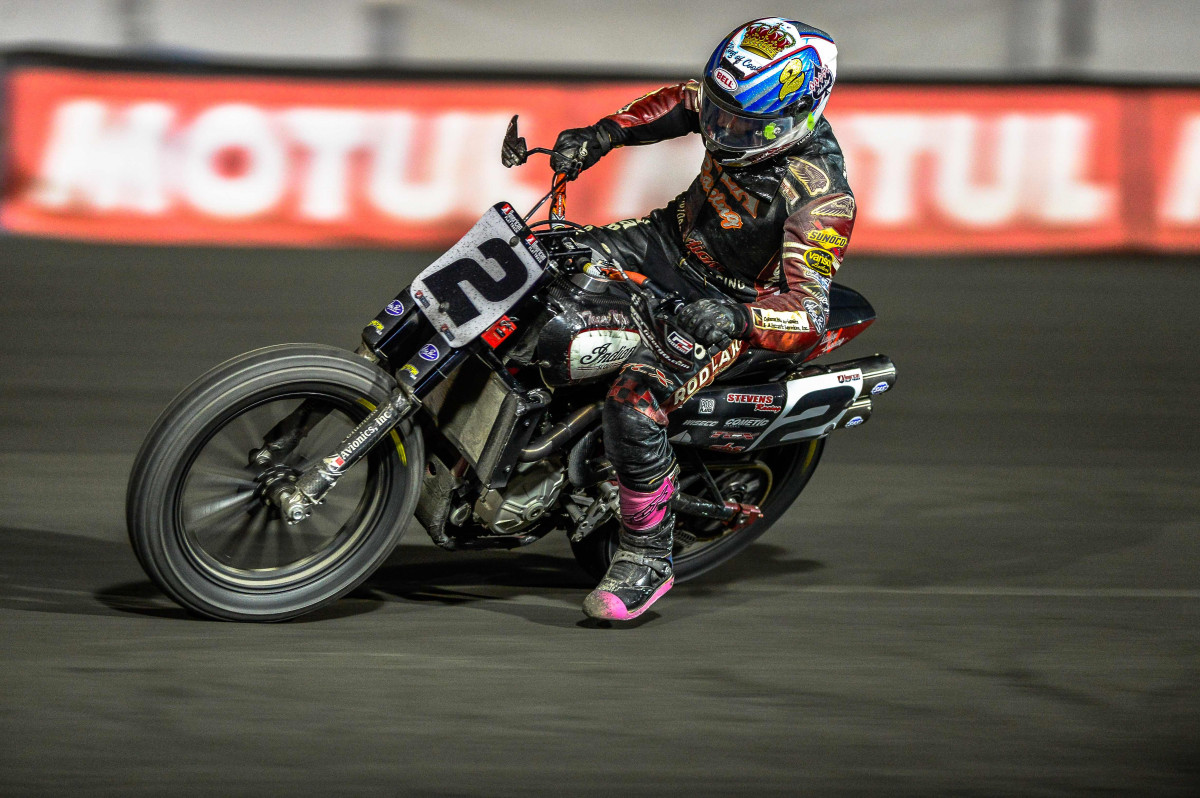 The 41-year-old’s last race was AFT’s 2018 finale on October 6 at the Metlife Sports Complex’s Meadowlands Racetrack, where he finished a strong seventh. Coolbeth finished seventh on the season, too, a bittersweet campaign that had him on the podium five times – including a ‘win’ in Altanta after his runner-up spot at Dixie Speedway morphed into a victory after race-winner Jared Mees was DQd post-event.

Coolbeth, an almost certain first-ballot Hall of Famer, will be missed and appreciated by the racing world for reasons over and above his friendly and mellow demeanor: His three Grand National Championships, in  ’06, ’07 and ‘08; his 37 AMA National wins, sixth all time and three better than boyhood idol Bubba Shobert; his 39 runner-up finishes; his 350-plus Main Events; his Rookie of the Year honor in 1994; and his 25 years as a professional.

There’s a less-obvious and less-measurable reason, too: Coolbeth Jr. is that rare species in professional sport that forms a living link between the current and the past, connecting today’s American Flat Track stars with some of the sport’s biggest legends, guys like Scott Parker, Chris Carr and Ricky Graham – riders Coolbeth Jr. raced with in his early days. When you watch Coolbeth ride you can almost see him drafting in a pack with Graham at Springfield, or ripping through a Lima, Ohio pea-gravel corner alongside Carr or Parker.

We caught up with the ‘King of Cool’ (he doesn’t much like the nickname, by the way) in the days after the Meadowlands Mile finale to capture his thoughts on his career, his 2018 season, retirement, his plans for the future and how it feels to be one of the last threads of tissue connecting today’s stars with the legends of yesterday. 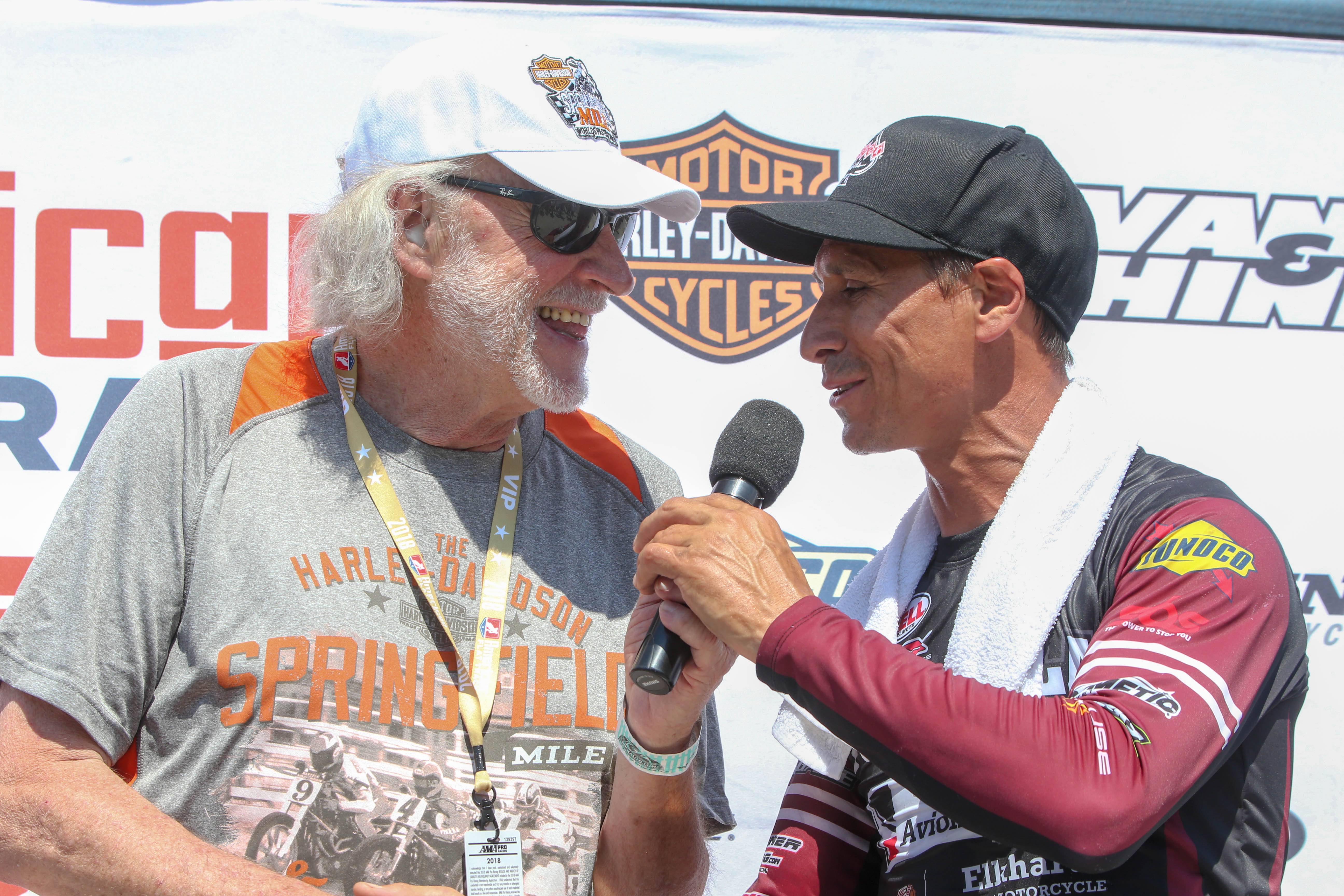 Kenny Coolbeth Jr., chats with another flat track legend - Mr. Dave Despain - at this year's Springfield Mile I, where KC was fast qualifier and ended up third at the finish.

How does it feel to be a living dinosaur of sorts? A guy who connects Carver, Wiles and the Baumans – and Price, Carlile and Bromley – with legends like Parker, Carr and Graham?

It’s really cool. Ricky Graham, Scotty Parker, Jay Springsteen, and several others … I remember those guys and those days so well. The kids today, they never got to see these guys race, unfortunately. I was so fortunate to be able to ride with them and learn from them. They inspired me, and I learned a lot about racing and our sport. I hope the kids today look into our history and get inspired by all those great riders … so many of them. But times have changed; the kids today are training, eating right, riding moto to stay strong and sharp, and stepping up their game. Back in the day it was pure talent. Now it’s talent and fitness.

What if those legends had trained as hard?

It’s hard to imagine what things would have been like back then if Parker and Springer and Carr and the rest had done the fitness thing like many of the top riders are today. It’s almost scary to think about! Talent was the key with those guys. Just amazing talent.

Let’s talk about this season. You did pretty well for an old guy. Five podiums and seventh overall. Even with the one-race suspension.

Things went really well for us this year. We had a great group, our primary sponsor John Weiss and his wife Nila, Dave Atherton, my Dad and wife and our family, etc. Just a great group of people. Atherton knew John (Weiss), who had a dragracing background, and they talked about putting something together for 2018. And it all worked out. Two Indian race bikes, a hauler, funding for Dave’s services, everything you need to do things right. Plus our many other sponsors [see below]. I wanted to win a few races this year, and we were able to certainly run up front on occasion, but I’ll take those five podiums for sure. It’s really hard to podium these days with the current level of competition, so I’m really happy how things turned out. 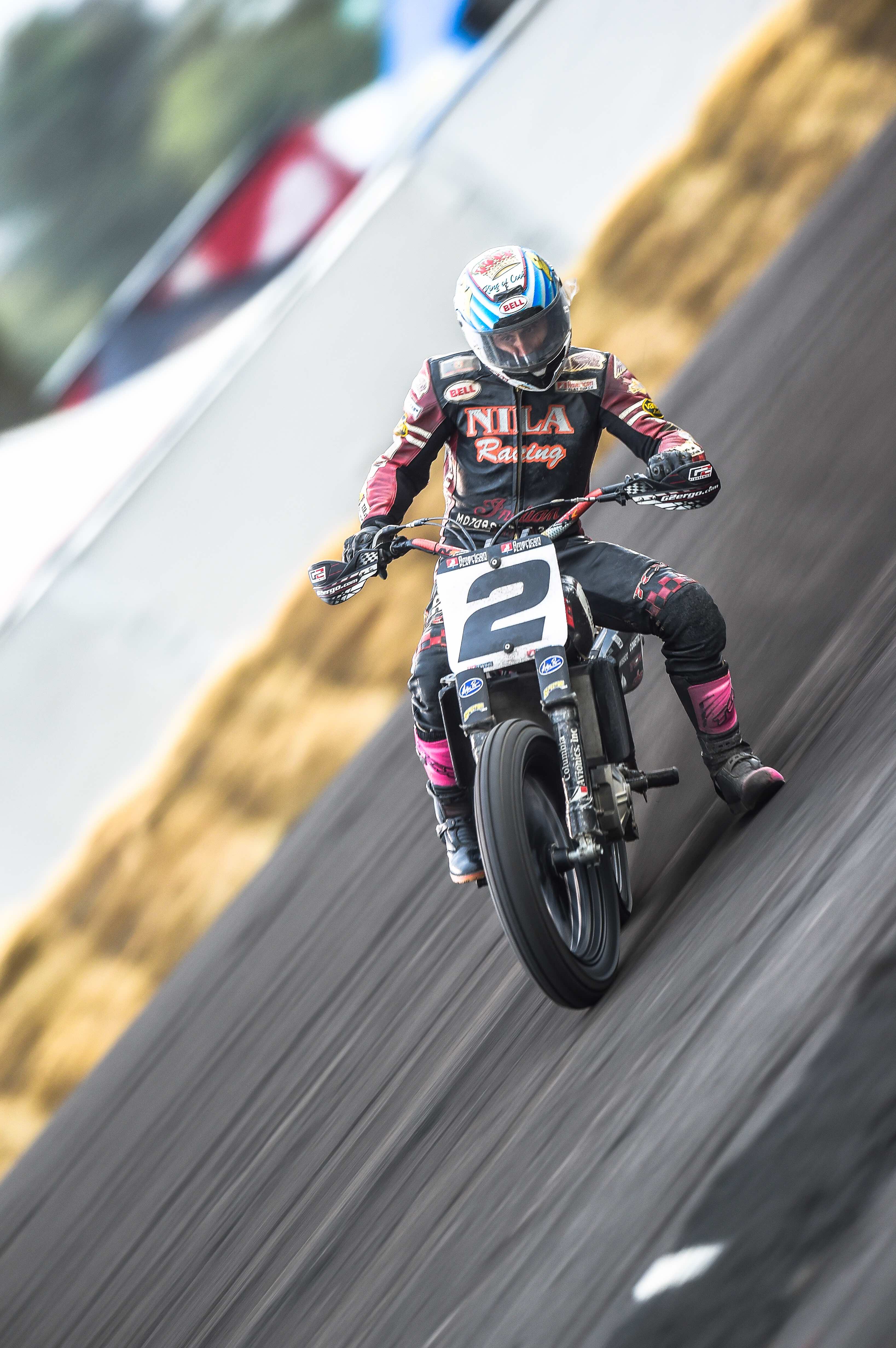 Coolbeth at the Meadowlands Mile earlier this month. He's still amazed how much fun that track was in early in practice. "You could hold it wide open for four laps!" [Scott Cavalari]

Talk about that Williams Grove incident with Johnny Lewis.

My emotions got the better of me there, but his was a rookie move, and something that jeopardized everyone behind me. It takes a lot to get me mad, as I typically brush stuff off. But that did the trick.

You obviously enjoyed riding the Indian this year.

It’s just amazing what the Indian folks accomplished with the FTR. They definitely did their homework. It’s obviously the bike of choice right now, and if you want to do well you gotta be on one. It’s a shame Harley-Davidson isn’t up to snuff relative to the Indian. Terry [Vance[ and his guys have come a long way, but it’s just not quite there for them. The thing is, flat track needs Harley there, needs them to be more competitive. It’s good for the sport, good for the riders, good for sponsors, etc. It’s 20-20 hindsight, but they should have done an all-new, racing-spec engine. I’m just not sure a production-based engine is gonna pan out, though we shall see. It’s going to be interesting next season with Bryan back on a Kawasaki, and all those Indians. And if KTM and Yamaha get more involved in the AFT Twins class beyond that, it’ll be even more interesting. Those rivalries, new ones and old ones, are good for the sport. 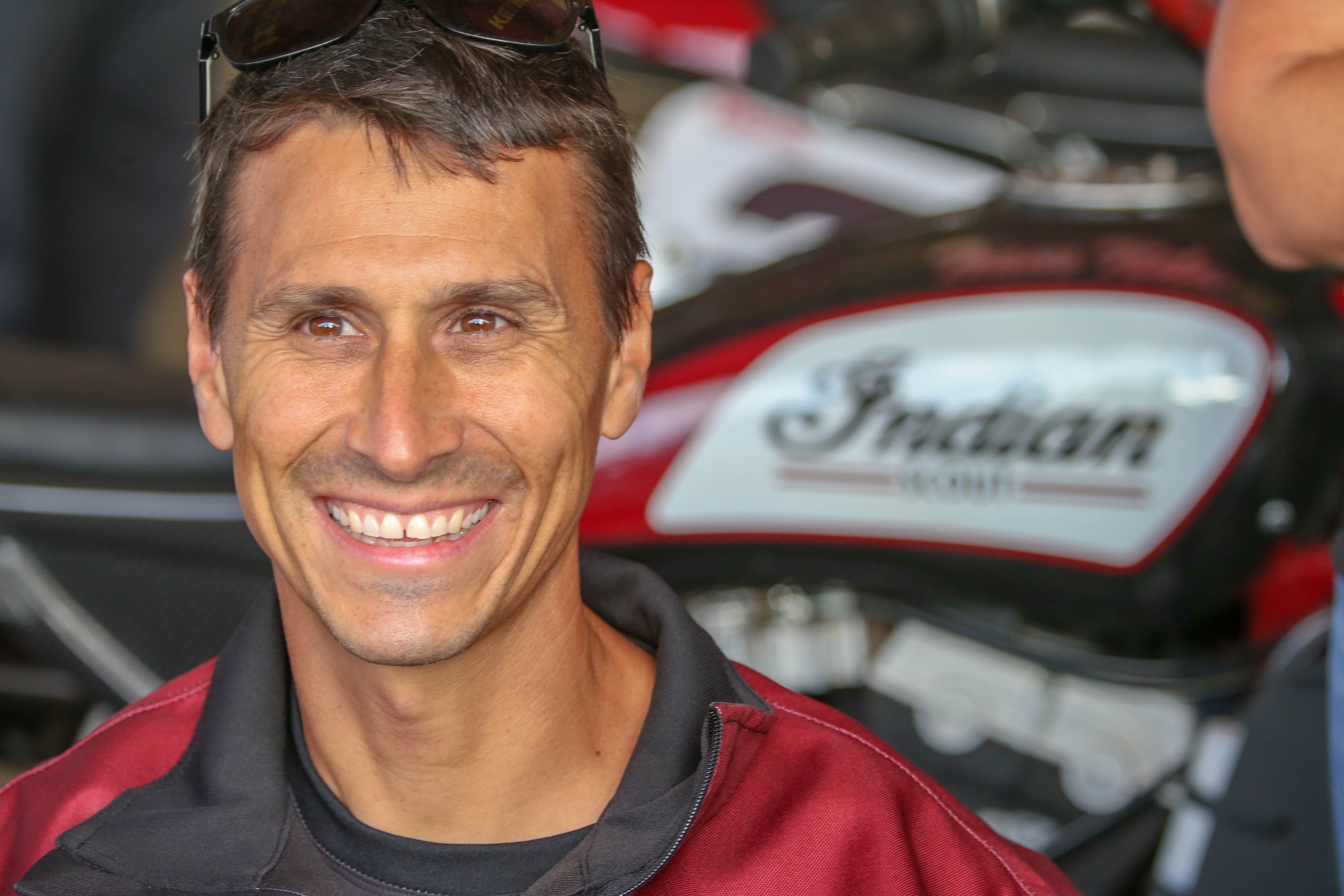 The smile is 100% Coolbeth, but riding the Indian Scout FTR750 this season made it even more genuine.

Talk about your 2017 season with the Harley-Davidson team if you can.

It was really difficult, and really frustrating, for me and I’m sure for the team, too. The engine just wasn’t even close. It’s better now, but they’re still off the pace. The year was depressing; I began to doubt myself, my skills, my experience. But this year helped so much. I felt rejuvenated all season long, and it’s been a great way to end it. 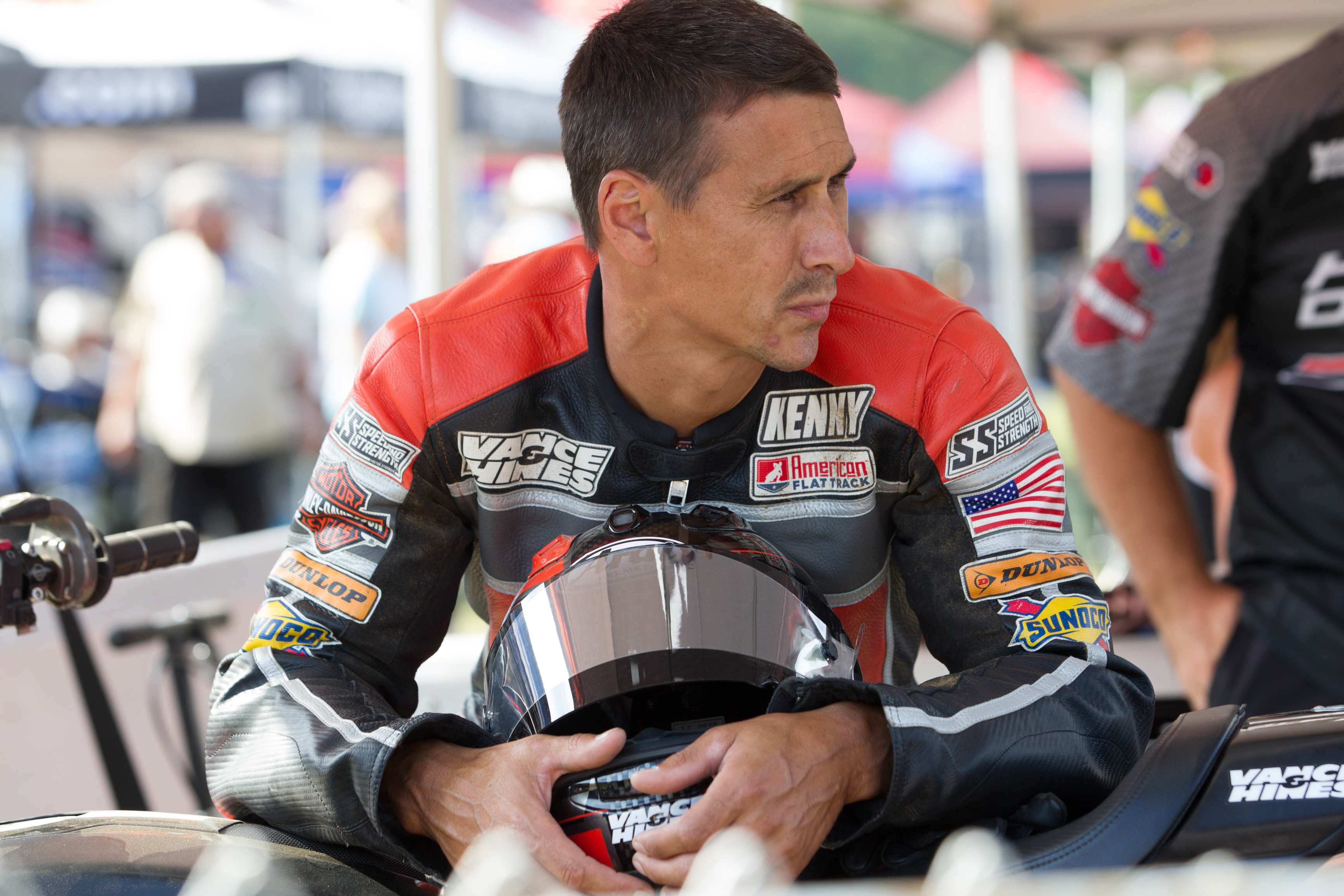 Coolbeth's 2017 season with the factory Harley-Davidson squad was a challenge, but he rebounded nicely this season to finish a strong seventh.

So you’re not second-guessing your decision at all?

Not at all. It’s time. It’s bittersweet, but it’s time. My career and my numbers speak for themselves. I’m still competitive, but the 25 years of traveling really wears on you. I hate that part of it. My little guy is growing up, and I have a new business as a Golden Spectro distributor for Florida and Southern Georgia percolating, and that’s exciting for us. Most of my family is down here in Florida now. I bought the business, along with the client base, and now my wife and I are expanding it. It’s challenging, but I’m a go-getter. I want and need to stay busy.

It seems inconceivable that you wouldn’t race locally a little bit.

[Laughs!] It’s funny you say that because I was working on my bikes and getting stuff ready just last night. I’m racing this weekend in Ocala. I’ll still do local stuff, but nothing beyond that. I want to have fun with it, and while I had a lot of fun this past season, the pace and the travel and the strain on the family are just too much. But I will continue to train and do my motos and race locally on occasion. It’s just part of me. 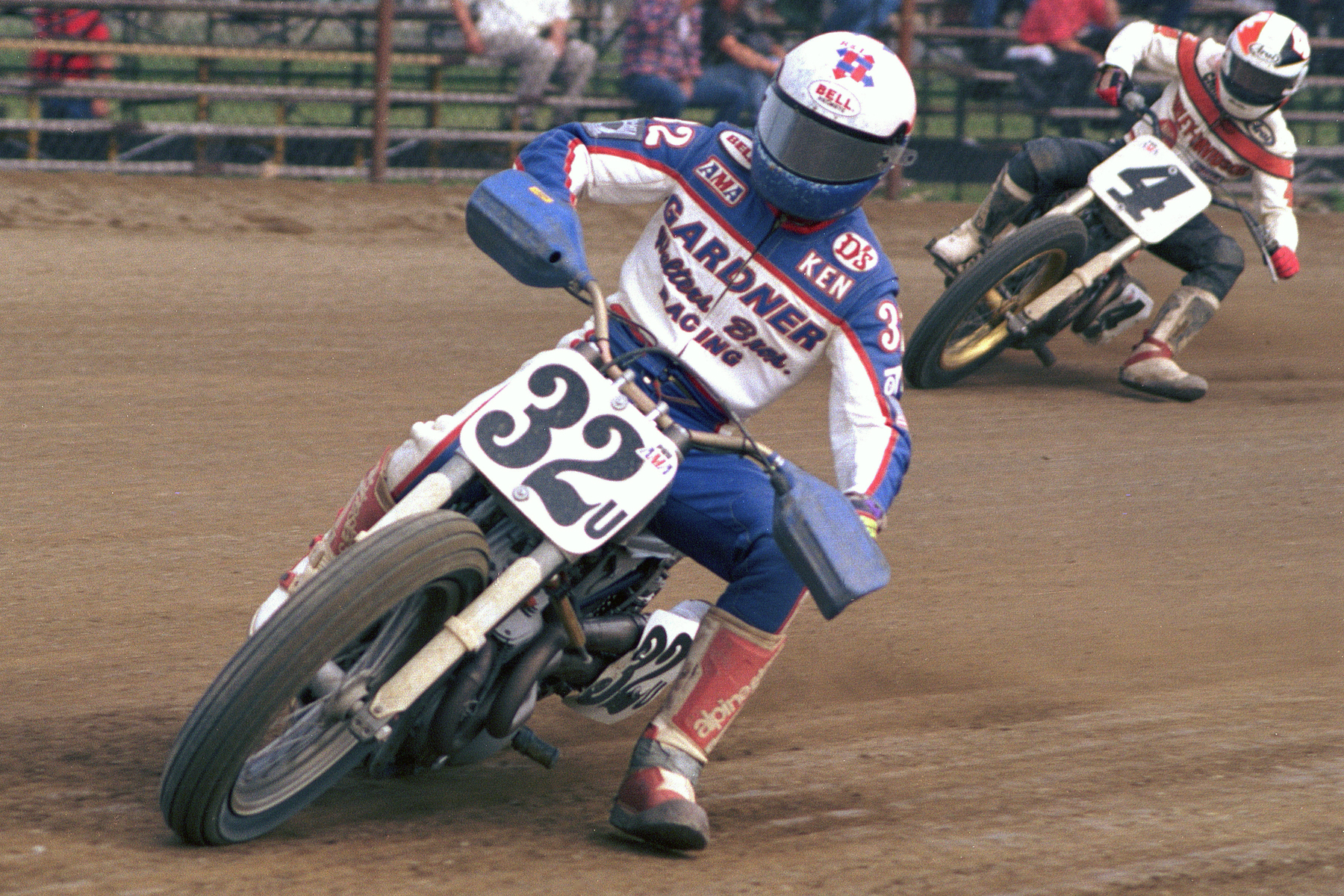 Coolbeth in 1994, the year he captured Rookie of the Year honors - and a year he spent racing against some of the sport's legends - such as Chris Carr (4). [Dave Hoenig]

Which younger riders impress you?

A lot of the younger riders are impressive, and most are pretty serious, too… training and eating right, so they’re gonna be good. Shayna Texter really sticks out. She’s had time on Twins, but it’s amazing how good she is on a Single, and how hard she rides that bike given her size. She’s tough, and she can ride. Brandon Price is another one to watch, along with [Ryan] Wells and [Dan] Bromley and [Kolby] Carlile – and a bunch of others. Lots of talent there.

I need to say something about Jared Mees. Hats off to the guy. He’s pushed things to a different level. He’s stepped it up, the way he approaches things, the way he trains, and eats. It’s just amazing what he’s done. I trained with him during the winter and really appreciate the guy. 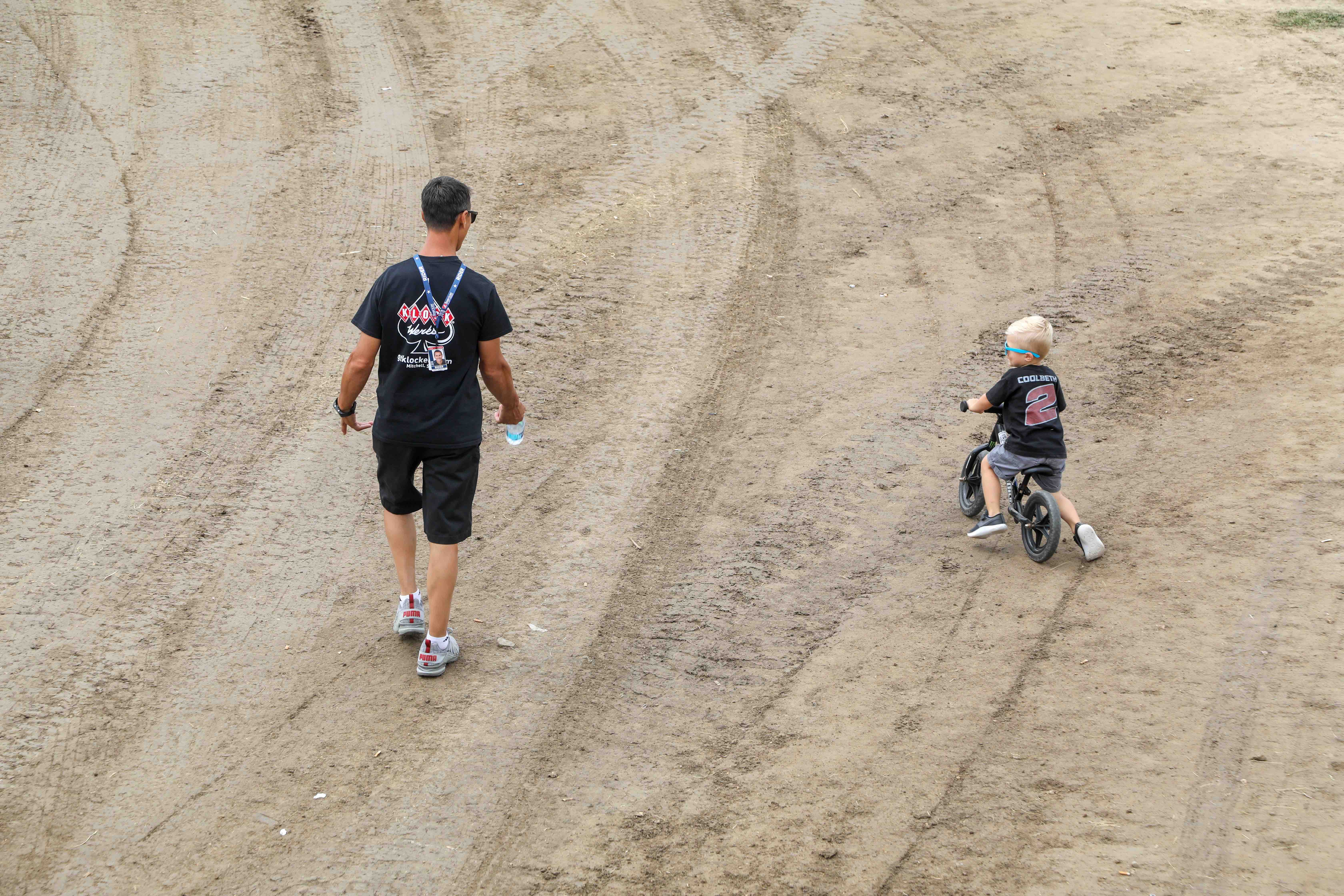 Coolbeth admits to hating travel the most, but family is the strongest thing pulling him back home.

What will you miss most about not being on the circuit?

The people. The flat track community. It’s a big family, really, and while not everyone is friendly, most are, and there’s usually a pretty good vibe. The riders are competitive, but even after a race we all come back and laugh about it. I’ll miss some on-track stuff, too. I’m thinking back right now to the first practice session at Meadowlands….wow! It’s rare when you can hold it wide open for four laps…such a blast! What a great venue that was. Definitely one of the better tracks and facilities. I’ll miss the fans, of course. They just love being part of it all, and you can tell. Things are looking good for the future.

Biggest change you’ve seen in the sport over the last decade or so?

Television, for sure. I give AFT a lot of credit for that. It’s exposing our very exciting sport to a much larger audience, and that has the potential to bring in bigger sponsors, for the series and the riders, which helps everyone, especially the privateers doing things on a tight budget – which is most of them. It takes a lot of money and sweat equity to do this, and I’m thinking it’ll eventually pay off sooner or later. The sport’s in a pretty good place right now. Not perfect, and some things need to change. But it’s pretty solid right now, and I give AFT management a lot of credit. 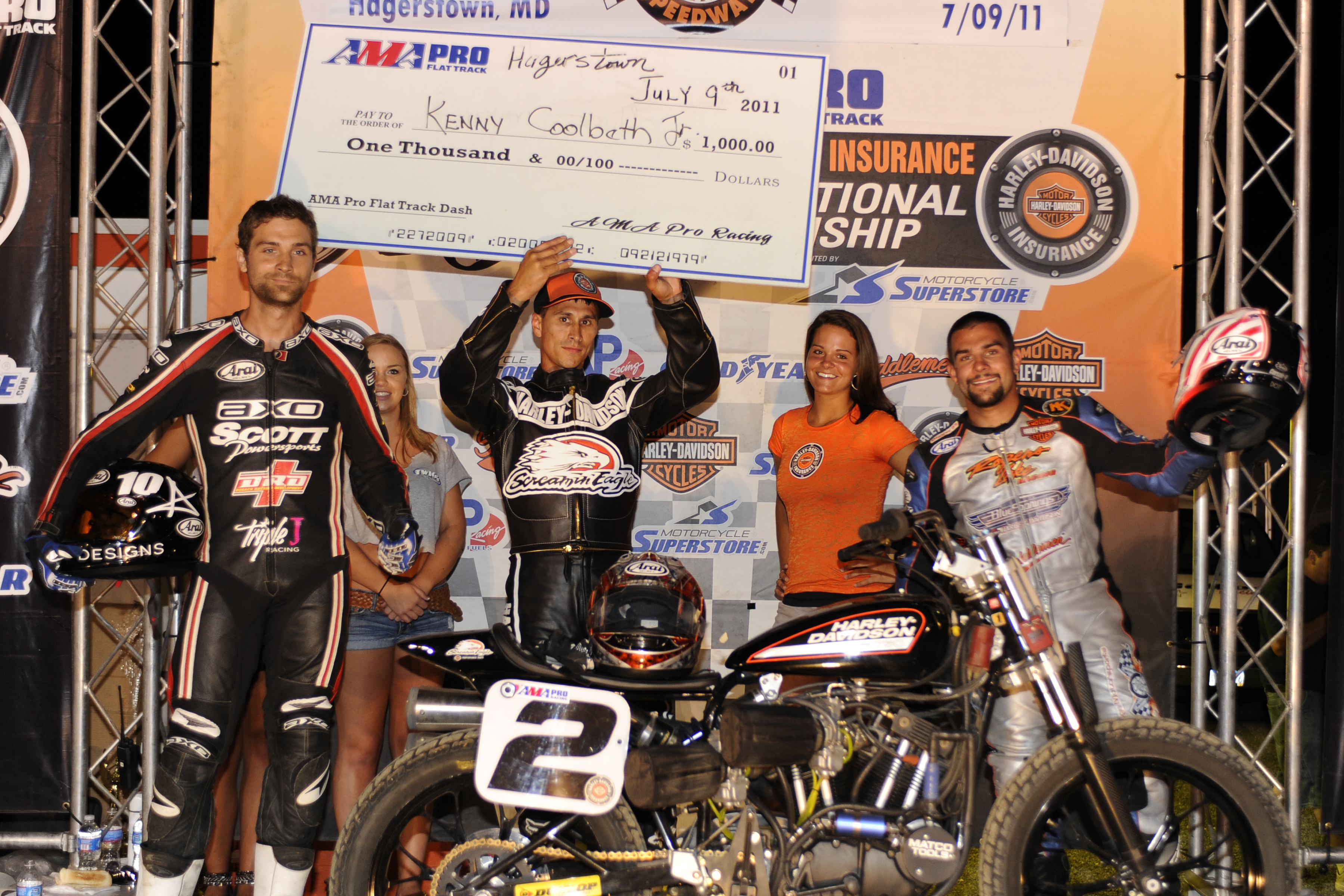 Coolbeth grabs a cool Dash For Cash grand at Hagerstown in 2011, with Jared Mees (right) and Johnny Lewis in tow.

You’ve said your favorite rider is Bubba Shobert. Tell us why.

As a kid I definitely looked up to Bubba. The way he rode, and his road racing exploits later on. I remember being at Syracuse and watching Bubba get into Turn One while sitting on the top of our camper. It was just so impressive to watch. That whole era, all those guys … it had a really big impact on me. But yeah, he was my idol.

Do you remember your first race?

I do. It was at Loudon. Don’t remember exactly when. I was four, I think, and riding my JR50 Suzuki. I got lapped and lapped, but it didn’t bother me. It was fun, full bore ahead. My parents were all in. I remember riding that JR for the very first time. My dad, running behind me, holding onto my shirt! My dad raced all that time, and I grew up at the races. You wanna be like your dad, right? So it was natural to become a racer. It worked out. 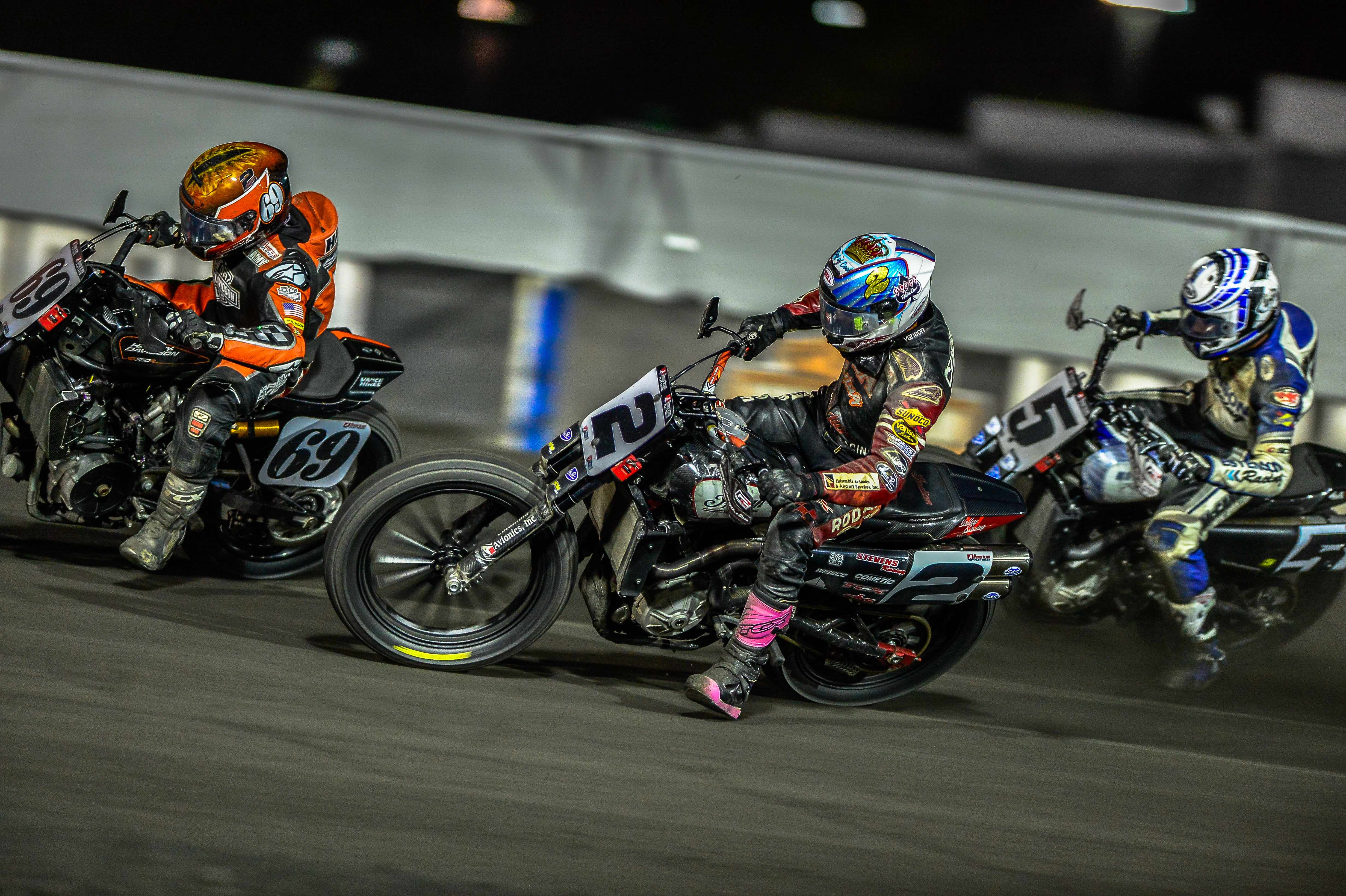 The back-to-back-to-back championships, of course. Especially 2006, the year of my first title. First year on the factory Harley-Davidson team, and my first championship. Pretty cool.

How about your sponsors?

Kenny, you left fans and the flat track world with a lot of great memories. Thanks for all of it, and we’ll be looking for you down in Florida and maybe at a few Nationals in 2019. We know you can’t stay away too long, even if it’s just to come watch!