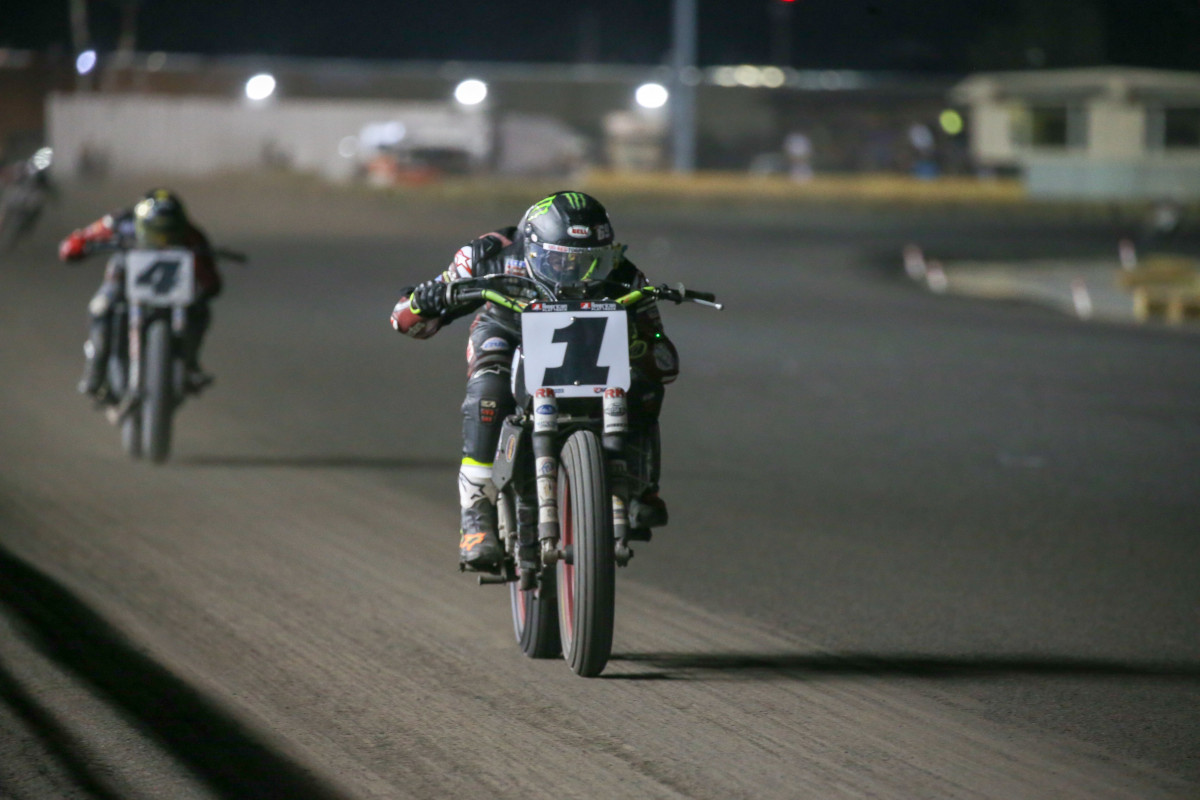 While Briar Bauman (No. 14 Indian Motorcycle/Progressive Insurance FTR750) already clinched the 2019 AFT Twins title, the man he dethroned still had bragging rights in his sights. Jared Mees (No. 1 Indian Motorcycle/Progressive Insurance FTR750) went wire-to-wire in the AFT Twins Main Event to complete a perfect sweep of the season’s six Miles and end the year with a class-leading eight victories.

Mees was pushed throughout the shortened Main by long-time rival Bryan Smith (No. 4 Crosley Brands/Howerton Motorsports Kawasaki Ninja 650), who was desperate to extend his streak of scoring at least one Main Event victory per season dating all the way back to 2006.

But while Smith closed on Mees late, he ultimately ran out of laps, coming up 0.766 seconds short at the checkered flag.

After the race Mees said, “I want to give another big shout out to Indian Motorcycle. Those guys are a phenomenal group of people to work for and work with, and I enjoy every minute of it.

“It feels good to come in and win the last couple races and end the season strong, and also to go into the offseason with a little bit of homework to do.”

The runner-up result was Smith’s second in succession, finishing up an otherwise difficult year in strong fashion.

Behind the battle for the win, Bronson Bauman (No. 37 Indian Motorcycle/Progressive Insurance FTR750) fought his way past the works Harley-Davidson of Brandon Robinson (No. 44 Harley Davidson/Vance & Hines XG750R Rev X) to not only claim the final spot on the podium, but also put the finishing touches on a championship 1-2-3 for the Indian Wrecking Crew.

Henry Wiles (No. 17 Bandit Industries/DPC Racing/Wilco Racing Indian FTR750) edged Jeffrey Carver Jr. (No. 23 Roof-Systems of Dallas/Indian of Metro Milwaukee FTR750) by a scant 0.008 to round out the top five. 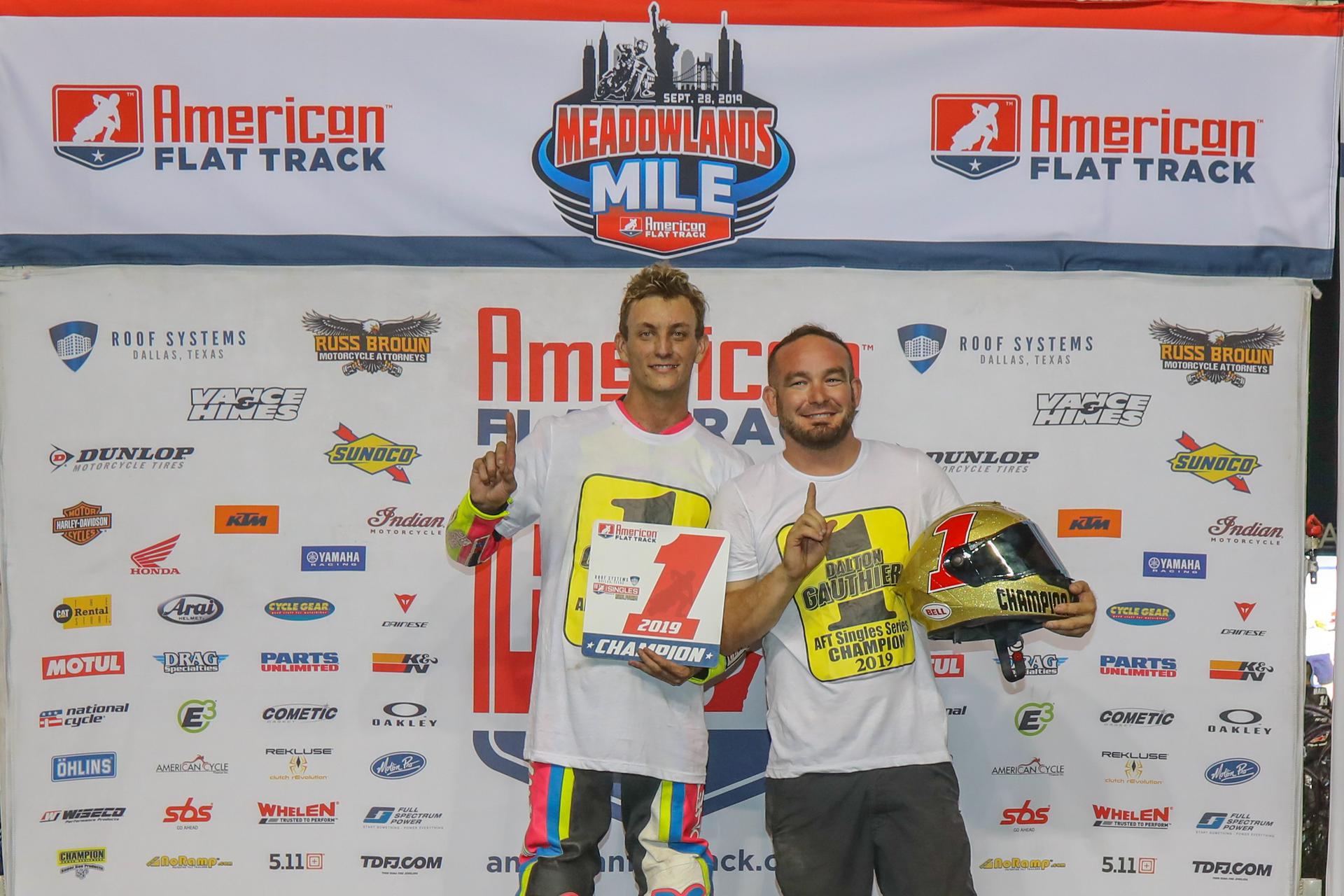 Dalton Gauthier (No. 122 D&D Cycles/Gobert Smash Husqvarna FC450) completed his remarkable comeback season with an uncharacteristically quiet ride to 14th at Meadowlands. But sometimes quiet is good, as that was more than enough to lock up the 2019 Roof Systems AFT Singles presented by Russ Brown Motorcycle Attorneys championship.

“I don’t think a lot of people saw me as a champion in this class coming into the season opener,” Gauthier said, “‘Robby-Bobby’ McLendon and me worked together all year. There was a lot of stress and a lot of ups and downs, but we worked through it. I can’t thank him enough as well as my parents and everyone else who supported us.

“I believed in myself, and every weekend I gave it 110%. I really struggled today. I was stressing out all day, but I pulled it together for the Main, I guess you could say. I was way behind, but I just wanted to bring home the championship. This season has been awesome and one I’ll never forget.”

2018 AFT Singles champ Dan Bromley (No. 1 Red Bull KTM Factory Racing 450 SX-F) gave a valiant effort in hopes of repeating. He gave his all in a three-way tussle for the race win with Mikey Rush (No. 15 RMR Honda/Red Riders Rewards Honda CRF450R) and Ryan Wells (No. 94 Estenson Racing Yamaha YZ450F).

Bromley, who needed to win to have any chance at the crown, finished a close third with Rush out-dueling Wells on a thrilling final lap to claim the victory.

The win was Rush’s fourth of the season to equal Gauthier for most in class on the year. It was also his third win in four attempts on a Mile in 2019, and actually bumped him ahead of Bromley in the final championship order (Gauthier 286, Rush 280, Bromley 277).

Rush said, “My Honda CRF450R ran on point tonight. American Honda came on board with the Richie Morris Racing team this year and helped build me awesome strong engines for these Miles.” 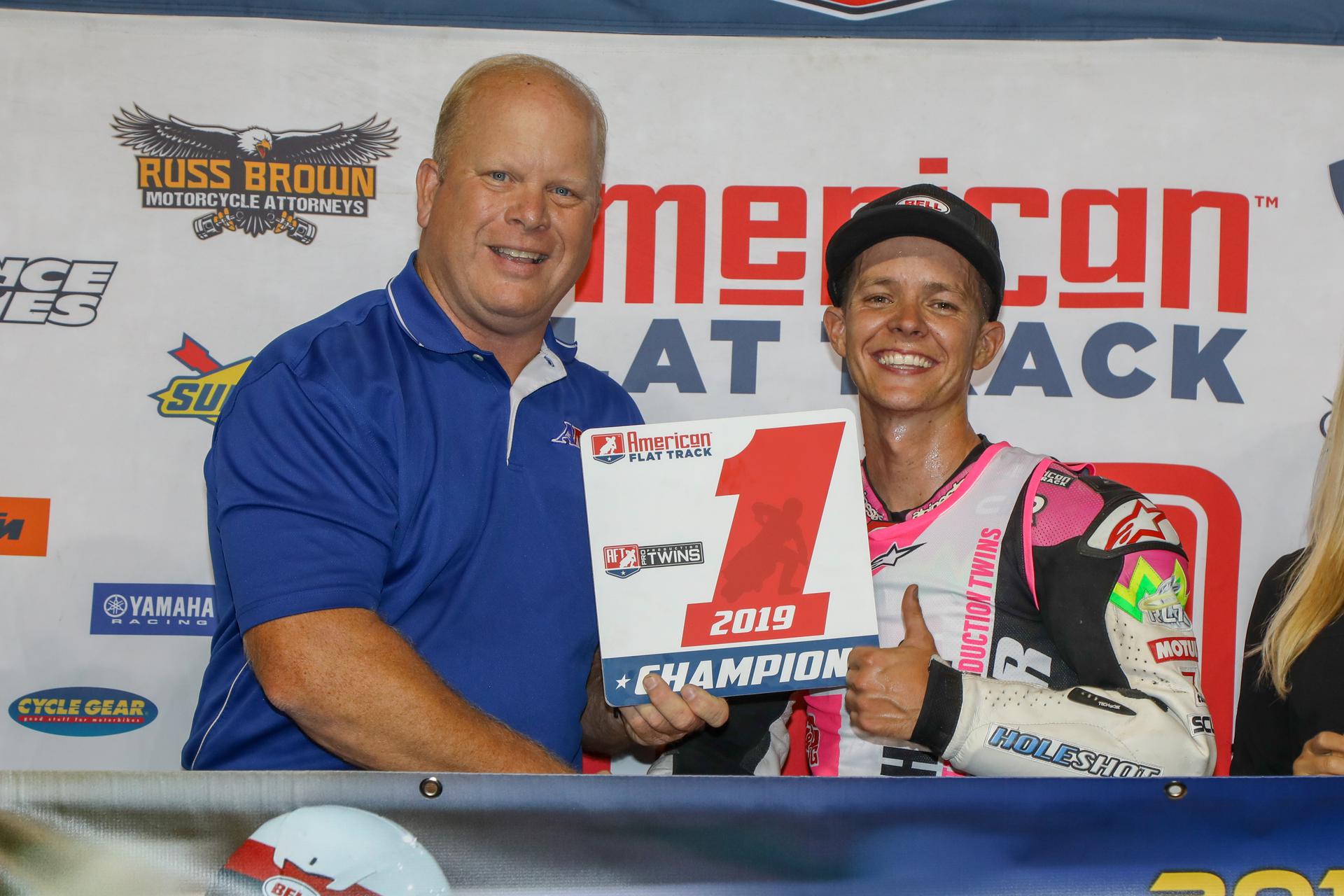 Cory Texter (No. 65 G&G Racing/Holeshot Powersports Yamaha MT-07) jumped out to a huge early advantage -- both in the AFT Production Twins championship fight and Saturday’s season finale -- and ultimately needed every last inch of that initial momentum to coast to what turned out to be a dramatic championship triumph.

After pulling nearly a second clear on the opening lap, Texter was overhauled around the outside by primary title rival Kolby Carlile (No. 136 Estenson Racing Yamaha MT-07) on lap 2. However, Carlile broke just two laps later, handing the lead, and a seemingly easy path to the championship, back to Texter.

Incredibly, with just two laps to go, Texter encountered mechanical issues of his own. He was left helpless as the field, led by Chad Cose (No. 49 Parkinson Bros Racing Kawasaki Ninja 650) and including title hopeful Ryan Varnes (No. 68 Varnes Racing/RoyBuilt Kawasaki Ninja 650), blasted past.

All Texter could do was continue forward at a snail’s pace, but that pace proved good enough to finish ninth and cap off a successful three-win, five-podium championship campaign.

Newly-crowned 2019 AFT Production Twins champion Texter said, “I had some tough years and for the G&G team to take a chance on me means everything… I stayed loyal to the team, and I couldn’t be happier with the bike they put underneath me. So many people sacrificed so much to make this happen. It feels good for a Texter to finally win a professional title. This is for all the times Shayna got close and for all the sacrifices my dad made. I can’t even tell you how much he sacrificed to get us where we’re at.

“I’ve been going to these races since I was two weeks old. This is my life. For me to finally get this is a dream come true. It’s never been about making money or any of that stuff. It’s just been a lifelong goal for someone who grew up in this sport since they were a baby. This is awesome.”

Race winner Cose picked up Texter and took him on his victory lap. He said, “We’re brothers -- it’s one big family and it’s great to see. Cory deserves it and his team deserves it. They worked really hard to get where they are.

Varnes finished second in the Main Event to end up just eight points short of Texter (190-182) on the strength of his own two-win, five-podium season.

James Rispoli (No. 71 Black Hills Harley-Davidson XG750R) rounded out the podium in third.

Catch the feature broadcast of the American Flat Track season-ending Russ Brown Motorcycle Attorneys Meadowlands Mile on NBCSN with flag-to-flag coverage of the Main Events, enhanced by exclusive features and cutting-edge aerial drone and onboard footage. The broadcast will debut on Saturday, October 12, at 10:30 p.m. ET/7:30 p.m. PT and will re-air on Wednesday, October 16, at 1:00 p.m. ET/10:00 a.m. PT.