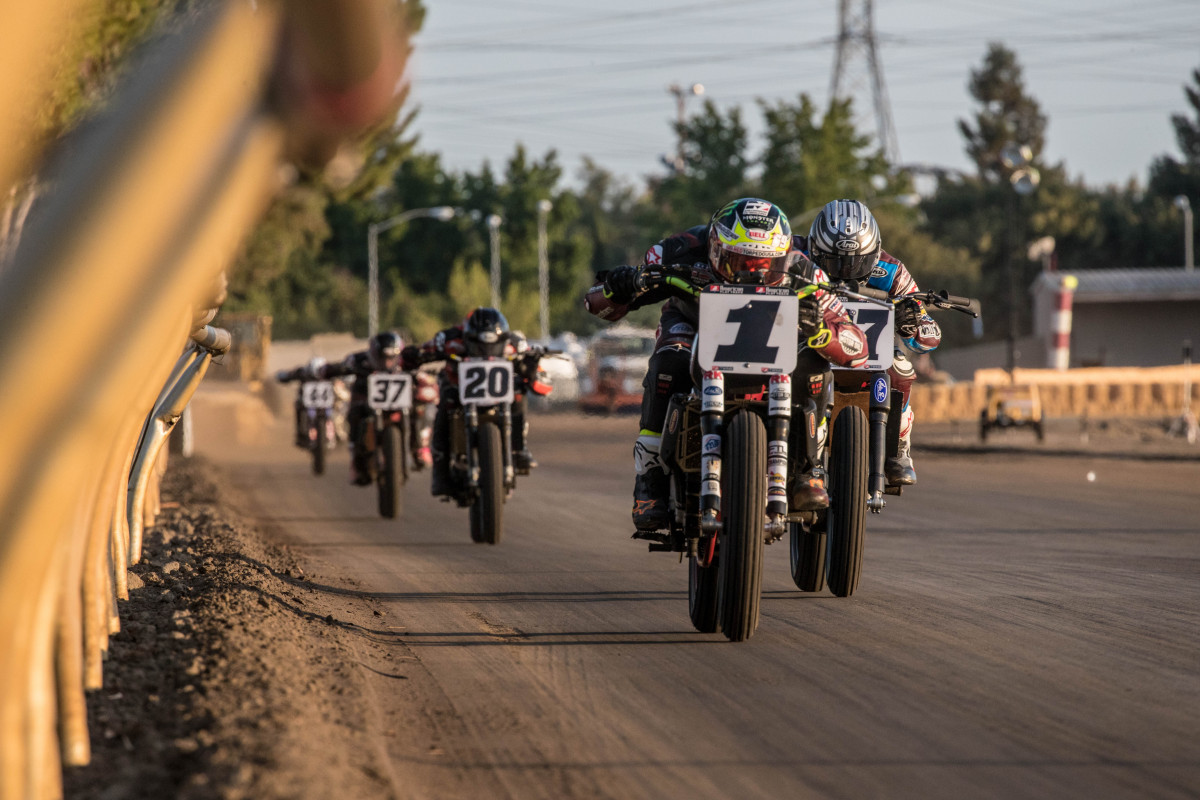 Cal Expo served as the latest battleground in a series of captivating showdowns waged by American Flat Track’s leading men. In the opening stages of the 25-lap AFT Twins presented by Vance & Hines Main Event, Mees appeared quite content to suppress the pace and jostle with the pack.

Bauman had other ideas, however, and forced Mees’ hand by leaping out front and pulling the pin. Mees responded, and then some. He rolled back around his adversary and pushed Bauman to his limits with his sheer pace. The championship leader barely clung on, giving chase from right around a second back over the race’s second half.

Bauman somehow managed to dig deep and summon up a final-lap charge. He lined up a last-gasp draft to the flag, but Mees’ decisive launch out of Turn 4 proved too perfect to overcome, powering him to a 0.151-second margin of victory.

The race was yet another demonstration of the resilient determination of the two championship rivals. Over the last five rounds, Bauman has twice bounced back from 16th-place finishes to win the next time out, while Mees has done the same on the heels of 15th- and 14th-place results.

The latest of those bounce-back triumphs saw Mees up his career record to 44 premier-class wins. That moves him out of a tie with Jay Springsteen and into sole possession of third place on the all-time AFT Twins victory order.

Mees said, “I banged the holeshot and then was keeping the pace kind of mediocre just to get the tires warmed up slow and try to get some players up in there. It worked out good -- I finally just dropped the hammer and the bike was working so good. You don’t really get perfect motorcycles even if you win a race. You win a race and usually you think the bike still could have been a little bit better. But this bike was really, really dialed-in. It was perfect tonight.”

The achievement comes just days after Fisher selflessly crashed his machine in an intentional act to avoid hitting a fallen Mees during the main event at Black Hills Speedway.

Texter featured up front throughout an epic 15-lap Main that saw a freight train numbering in the double digits do battle for the bulk of the race before whittling away to “just” an eight-rider lead pack in the end. She led the penultimate lap and looked well in control before being unexpectedly shuffled back to fifth to start the final lap following an assertive pass on the part of teammate Dan Bromley (No. 1 Red Bull KTM Factory Racing 450 SX-F).

Undeterred, Texter powered around the outside of two riders entering Turn 3 for the last time, and then launched out of the last turn to blast by leader Bromley and Red Mile winner Mikey Rush(No. 15 RMR Honda/Red Riders Rewards Honda CRF450R) in the decisive sprint to the checkered flag.

As a result, Texter now boasts eight Mile wins among her class-leading 17 career victories. Afterward, she said, “I definitely got pushed off the groove a little bit, unfortunately, by my teammate. I didn’t see that coming, so that elevated my heart rate a little bit coming to that white-flag lap. I just put it in so hard into 3, and got myself in a really good position and then got a draft off these guys into the lead.”

Bromley held on for fourth, while former AFT Singles class champ Ryan Wells (No. 94 Estensen Racing Yamaha YZ450F) rounded out the top five despite being just 0.214 seconds off the win.

Title leader and top qualifier Cory Texter (No. 65 G&G Racing/Holeshot Powersports Yamaha MT-07) jumped out to the lead early and threatened to return to his winning ways early. However, Gauthier and teammate James Rispoli (No. 71 Black Hills Harley-Davidson XG750R Rev X) responded en force, running down Texter in tandem and hounding him as a duo.

Gauthier would open up a three-plus second advantage before backing off late to secure the XG750R’s breakthrough triumph with 1.926 seconds in hand.

Gauthier said, “The whole Vance & Hines crew, everybody at Harley and Black Hills Harley-Davidson put me on this awesome motorcycle… This bike was working so good tonight. I couldn’t believe it. Right from the first lap in the Main, I knew it was going to be a good one. I got off to a good start, just like I wanted. I passed Cory around the outside in Turn 3 and just set sail. I just did consistent laps and tried to do my own race. I looked back halfway through the race and nobody was there, so I was like, ‘sweet!’”

The battle for second continued to grow in scope as the race evolved. Texter and Rispoli were first joined by a charging J.R. Addison (No. 24 Smith/Addison Racing Kawasaki Ninja 650), and finally by Kolby Carlile (No. 136 Estenson Racing Yamaha MT-07) and Cody Johncox (No. 196 Sunnyside Cycle/Luczak Racing Yamaha MT-07), who made it a five-rider scrap for the position on the final lap.

In fact, Texter and Rispoli were ultimately left off the podium altogether, as Addison earned second in the end, and Carlile squeaked through as well to steal away third at the flag. Texter picked up fourth-place points for his title campaign, finishing just 0.087 seconds behind Carlile, with Rispoli another 0.014 seconds behind in fifth.

Catch the feature broadcast of the Sacramento Mile on NBCSN with flag-to-flag coverage of the Main Events, enhanced by exclusive features and cutting-edge aerial drone and onboard footage. The broadcast will debut on Sunday, August 25, at 7:00 p.m. ET/4:00 p.m. PT and will re-air on Wednesday, August 28, at 4:00 p.m. ET/1:00 p.m. PT.

American Flat Track will go from TT to Half-Mile to Mile and back to TT again in less than two weeks’ time with next weekend’s Law Tigers Peoria TT Presented by Country Saloon at Peoria Motorcycle Club in Peoria, Ill., on Saturday, August 17. Live coverage will again be available at FansChoice.tv. Tickets are available for purchase here.