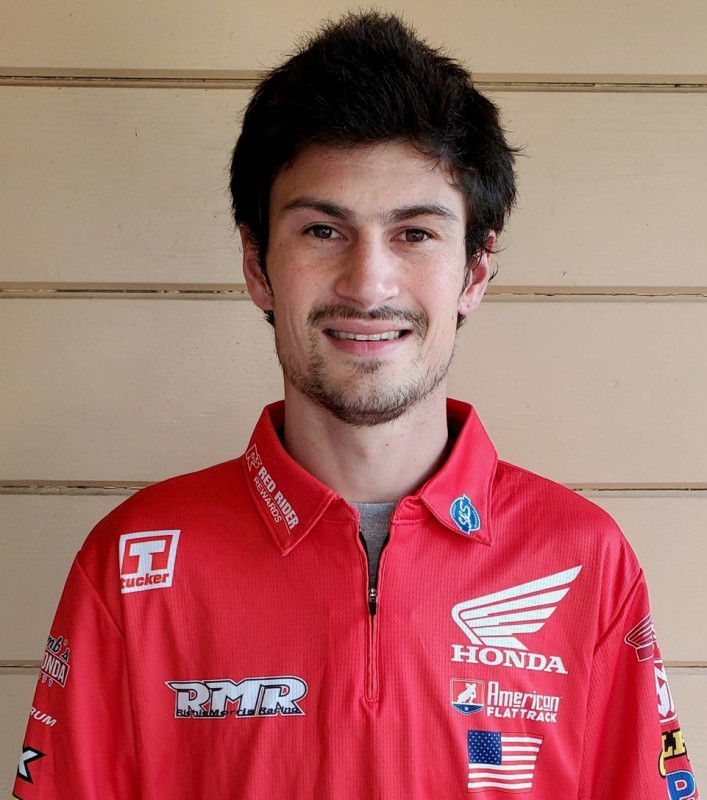 DAYTONA BEACH, Fla. (August 19, 2020) - Richie Morris Racing is set to go from strength to strength with the early-season signings of AFT Singles presented by Russ Brown Motorcycle Attorneys ace Michael Inderbitzen and sponsor C4 “More Than Roofers" ahead of this weekend’s American Flat Track doubleheader at the fabled Indy Mile.

The addition of Inderbitzen further bolsters the team’s already formidable AFT Singles effort that earned four victories and seven podiums while coming within six points of last year’s championship. He’ll line up aboard an RMR Honda CRF450R alongside dirt track legend Henry Wiles, who scored a podium result in his team debut in last month’s 2020 opener.

Inderbitzen has been a consistent threat to finish inside the top five since making his professional AFT debut in 2012. The Modesto, California, native raised his profile significantly in 2018 when he swept the two introductory races of the all-new AFT Production Twins class at the Springfield Mile I and Springfield Mile II. Beyond simply standing atop the podium both times out, Inderbitzen grabbed the paddock’s attention in particular due to the way he did so, twice slashing his way up through the field to earn the checkered flag.

Inderbitzen successfully capitalized upon that momentum a season ago, scoring a combined seven top tens and three top fives while securing top-15 championship rankings in both the AFT Singles and AFT Productions Twins categories. His season was highlighted at the Perris Half-Mile, where he earned an AFT Productions Twins fourth-place finish and AFT Singles runner-up result in back-to-back Main Events.

“I was thrilled to get the call to come ride for RMR this season,” Inderbitzen said. “Joining forces with a championship-caliber team is the natural next step in my career. I feel this is just the break I need to really show what I can do. It’s truly exciting to get a chance to compete aboard this level of equipment while being supported by such an outstanding group of professionals.”

Also joining the effort is C4 General Contractors based out of the Dallas-Fort Worth, Texas, area. C4 (Commercial Consulting & Contracting Corporation) specializes in servicing commercial properties in the wake of severe weather to restore property damages and get businesses back in business.

C4 is also no stranger to motorsports. It enjoys a preexisting relationship with RMR-partner Al Lamb's Dallas Honda, and the two entities have previously chased maximum speeds together at the FIM Bonneville Motorcycle Speed Trials.

C4 co-founder Russ Earnhart said, “We appreciate Richie allowing us to be a part of the RMR family. We’re very impressed by the work ethic and dedication that RMR and American Honda consistently demonstrate in their race program because that same ‘smarter, faster, better’ attitude and drive is what we’re all about as well. The goal is to succeed under any circumstance and enjoy the ride along the way. So let’s go have some fun and leave the world a better place than we found it.”

RMR team owner Richie Morris said, “It’s a pleasure to have a great sponsor and rider join the team right before the Indy Mile! We met Mark (Westbrook) and Russ (Earnhart) with C4 last year at the Bonneville Salt Flats and they are great guys with like-minded goals. We certainly look forward to a long-term relationship between C4, RMR, and American Flat Track.

“And signing Michael Inderbitzen just made sense once we saw this year's reshuffled schedule. We’re obviously disappointed there are no TTs and just one Mile event for the AFT Singles class. We’ve had to adjust to that, and Inderbitzen really shines at the groove car tracks. With the exception of the Indy Mile and Springfield Short Track, this season is nothing but car tracks, so it should be a great fit.”

Tickets for the Indy Mile doubleheader at Indiana State Fairgrounds and Event Center on Friday, August 21 and Saturday, August 22 are still available, but going fast. Secure your seats for AFT's return to this legendary venue by reserving your tickets today at: https://store.americanflattrack.com/ebooking/ticket/view/id/3177/#selectTickets.