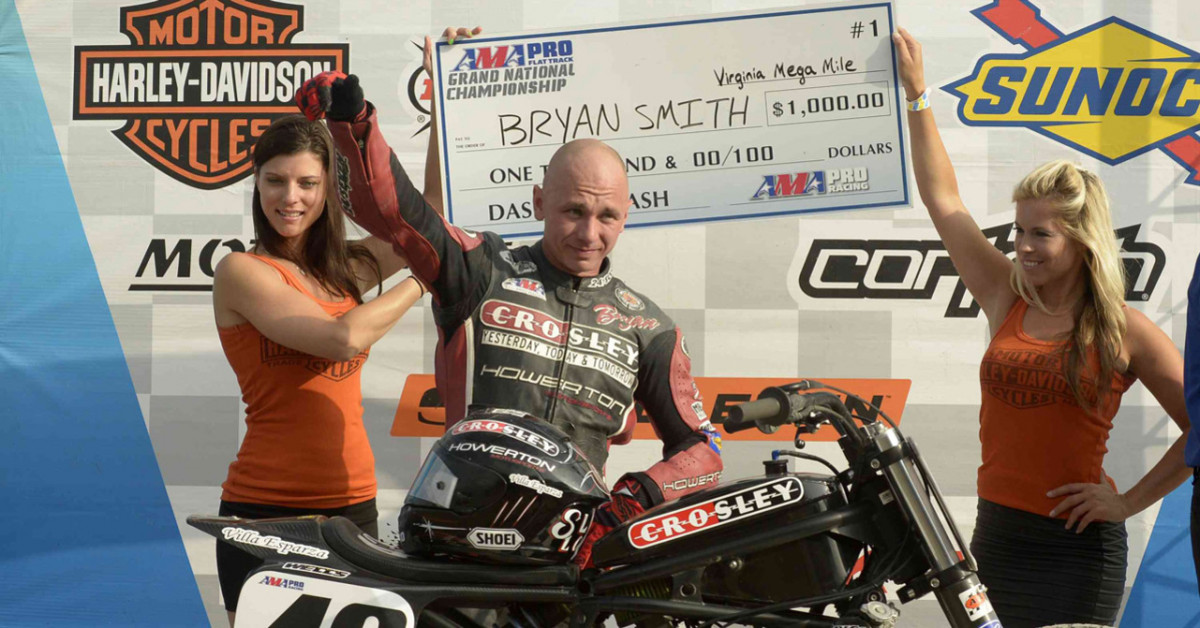 DAYTONA BEACH, Fla. (Oct. 9, 2014) – It was a picture-perfect evening at Hagerstown Speedway with just the slightest chill in the air on July 5.

As the checkered flag waved on the 33rd edition of the event, it was Bryan Smith crossing the finish line first – on a Kawasaki of all things.

The win was the first for Kawasaki on a half-mile track and the first at the track for any manufacturer other than Harley-Davidson since 1995. But for Smith, the win was evidence he had come full circle as an AMA Pro Flat Track Grand National Championship title contender.

Smith and his No. 42 Villa-Esparza/Crosley Radio Kawasaki have been known to be fast on the longer, mile or more, circuits. The 2014 season was no different in that regard, as he claimed three of his four wins to date on such tracks. But the Michigan rider’s emergence on the half-miles (three podiums in five races) is what catapulted him to where he stands now, second in points behind Jared Mees (No. 9 Rogers Racing Harley-Davidson) with only this Saturday’s Flat Track Finals at the LA County Fairplex in Pomona, Calif., left on the schedule.

Mees holds a 13-point advantage and is certainly in the driver’s seat, but Smith’s four wins and four fastest laps – both tied for tops in the series with Kenny Coolbeth – mean he’s a favorite to win and put all the pressure he can on Mees.

“I’ll just go in there and let it all hang out,” Smith said. “Let everything fall where it goes.”

Smith’s strategy changed in an instant last time out, at the Calistoga Half-Mile. After a lackluster qualifying effort, Smith’s higher line on the track finally started to pay off, as he looked quick in the main. He charged into the top five and was in position to podium for the fourth time in five half-miles, but his bike started smoking and he was black flagged. Smith didn’t come into the pits, however, and was disqualified. Mees was scored in second.

Instead of knowing exactly what he needed to do at Pomona, Smith became the one chasing the leader.

The dynamic is even more interesting because Smith and Mees are friends and neighbors at home in Michigan.

“We became pretty good friends when he moved to Michigan,” Smith said. “He didn’t reallyhave a choice. When somebody moves into your town and does the same thing you do, you either become friends or complete enemies.”

While the two have become close away from the track, they have remained rivals on it.

“If anything, just because we’re buddies, it makes us even more competitive on the track,” Smith said.

But the friendship and competitiveness has also bred a lot of trust and respect. That comes in handy when sliding through corners inches apart at over 100 mph. It’s also been on full display in 2014, as the two have battled at nearly every stop and have finished within two places of each other in seven out of 14 races.

Smith will be sliding through the corners at Pomona in hopes of clawing back on top and claiming his first overall GNC championship.

He won back-to-back GNC Twins titles in 2012 and 2013, but 2014, with just the overall champion being crowned, Smith has put it all together and proven he can be a force every time he throws a leg over his Kawasaki.

For more information on the Flat Track Finals, visit www.FlatTrackFinals.com.