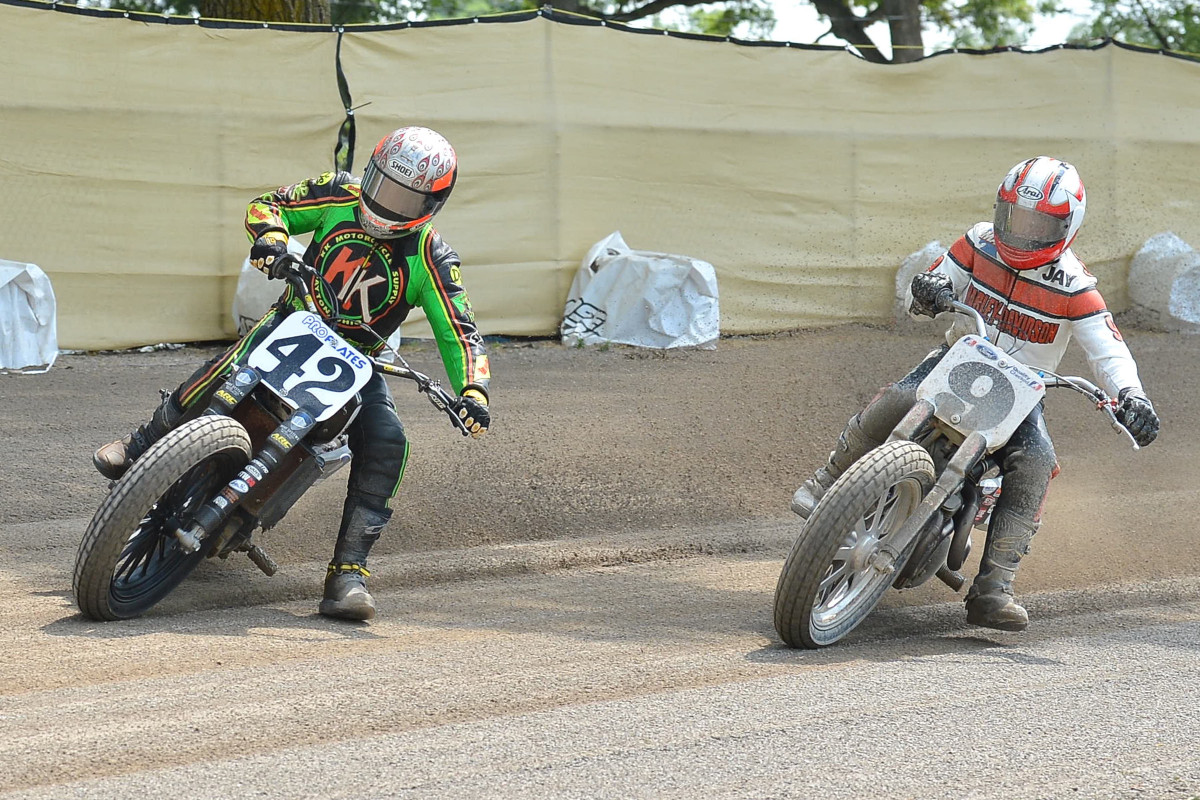 Springsteen and Morehead Mix It Up Again!

It’s a truly rare thing these days, seeing and hearing our sport’s great legends slip into leathers, strap on steel shoes and rip around a dirt oval at serious speeds. It doesn’t happen very often, but when it does it raises goosebumps as big as XR750 pistons.

And that’s exactly what happened for several thousand lucky fans at the Wauseon National Vintage Flat Track event at Fulton County Fairgrounds in Wauseon, Ohio, on the evening of July 19. Just as the sun was setting, Hall of Famers Steve ‘The Findlay Flyer’ Morehead (inducted in 2004) and Jay 'Springer' Springsteen (inducted in 2003) donned their leathers, jumped on their bikes and turned-’n-burned pretty much side-by-side at speed for five exhilarating laps during the ‘Showdown at Sundown’, rekindling memories of their decades racing against one another in earnest and giving fans young and old a rush many will never forget.

“Yep, the fans absolutely love it when we do these types of demonstration races,” said Springsteen afterward. “They miss seeing us – me, Steve, Corky Keener, Scotty Parker and others – and we miss seeing them, too! It was really hot that night, almost 100 degrees with lots of humidity, but getting out there with Steve was just amazing. We both enjoy this so much. You know, we both retired for the same reasons … we’re old! But we both enjoy getting back out here and feeling that adrenaline flow.”

Springer rode one of his personal XR750s in the George Roeder Jr.-promoted event, while Morehead borrowed an Indian FTR750 from Jeffrey Carver Jr. and crew chief Ben Evans. 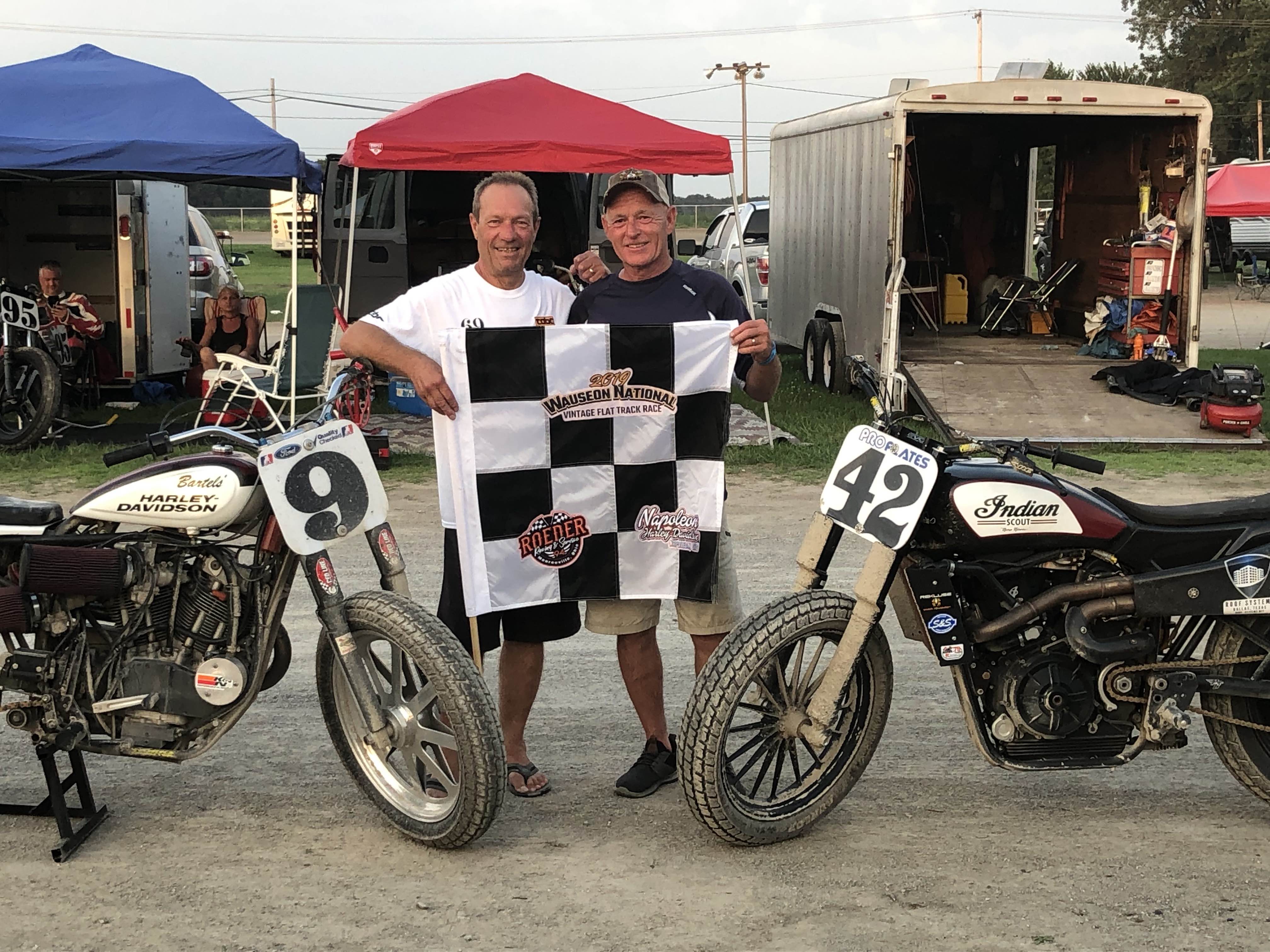 Dirt track legends and Hall of Famers Jay Springsteen (left) and Steve Morehead relax after their five-lap demonstration at the recent Wauseon National Vintage Flat Track event at Ohio's Fulton County Fairgrounds. The two had planned to go easy until the last lap, but being racers, the racer in them just couldn't wait. Imagery by Dave Hoenig.

“Springer could get up from the couch and probably make a Main event at a National today,” said Morehead, “so I wasn’t about to bring a knife to a gunfight! Jeffrey [Carver Jr.] and Ben [Evans] graciously loaned me one of their Indians, and after making a few adjustments it worked out great.

“It was a five-lap exhibition,” Morehead added. “Jay and I talked about what we’d do the first few laps … you know, do some side-by-side stuff, put on a show… but about halfway through things started to heat up, and by the white flag we were really hauling. We were grinnin’ and laughin’ during and after, and the fans seemed to love it as much as we did. Every time you get out on the track with Springer it’s a damn fun time!”

“Steve and I grew up racing one another,” said Springsteen, “so we’re totally comfortable riding around fast like that and close together. I really enjoyed riding behind him and watching that Indian go…those things are fast! It sounds like a Ferrari and hooks up big-time at the corner exits. It was the coolest-sounding noise! We were probably running at about 85%, which was plenty entertaining for us, and probably for the fans, too. Once he put his head down in the last couple of laps I couldn’t catch him. Racers wanna win, right? And he’s no different. These exhibition events are so fun! I probably do two or three every year; heck, I’d do more if I was able!

“I’ve had such a great life racing,” Springer added. “I was able to make a living and travel the world. Thousands of kids wanna do what we got to do, but only a handful get to. I feel fortunate, and I’m sure Steve does, too.

There were some truly fortunate folks in the Wauseon grandstands that night, as well. Thanks to Jay, Steve and George Roader Jr. for the wonderful show. Here’s hoping more of this sort of thing takes place in the second half of the season. 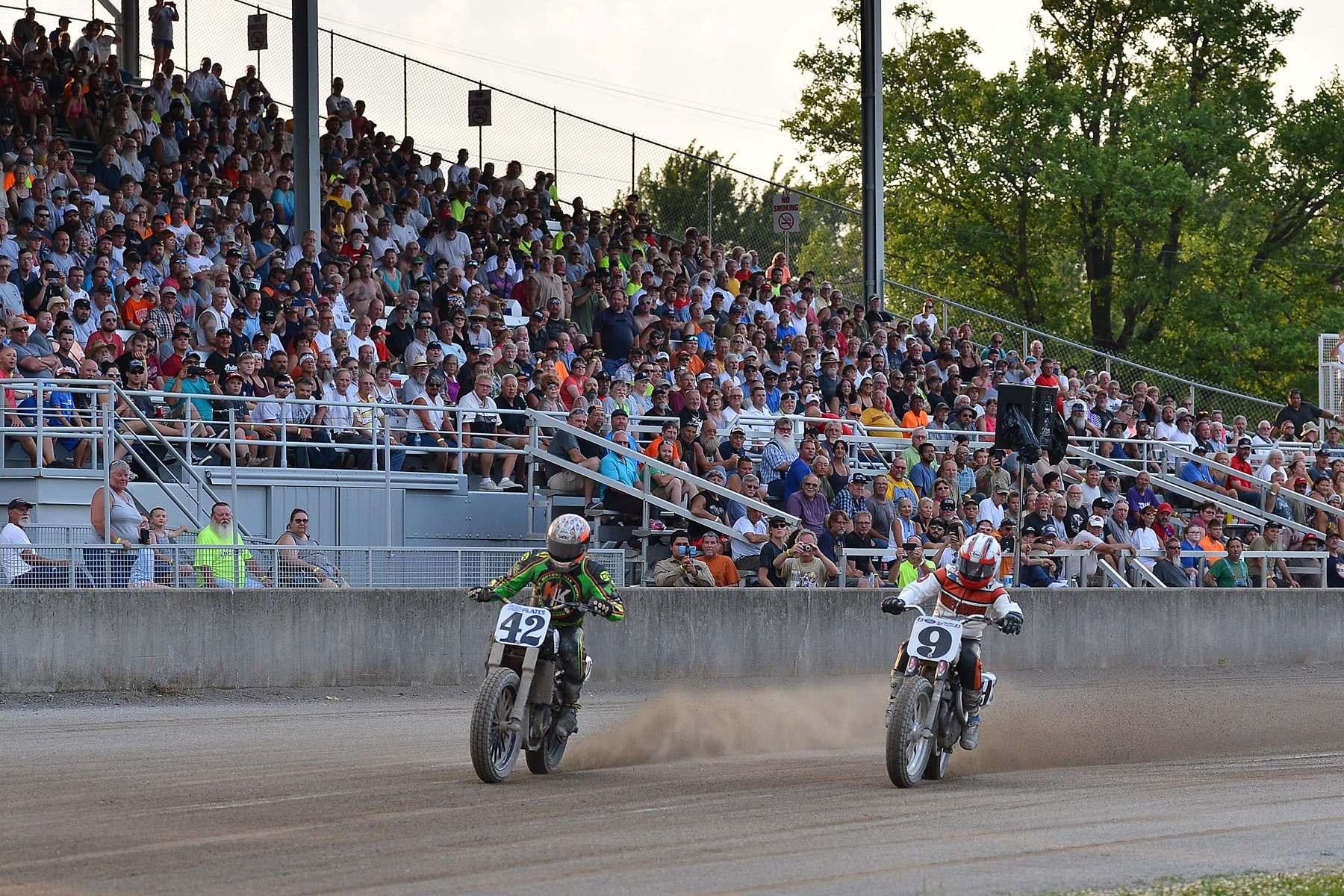 Seeing Morehead and Springer go at it again - even for only five laps - will generate memories that, for many, will last a lifetime. Thanks to the Roeder family for helping keep the legends on track (and probably a little out of breath!).