However, not to be lost in that drought-ending triumph was an incredible accomplishment: just minutes earlier, Shayna and Cory Texter combined to do something no one has ever previously accomplished in the history of American Flat Track racing: the siblings earned Main Event victories on the same day.

That two-part achievement was made over the span of approximately an hour -- a time frame almost too compressed for the history-makers to fully take it in. Almost.

Shayna had been in ultra-aggressive mode all day long, riding with the understanding that she needs to extract every single point possible from at the Half-Miles and Miles with an additional TT added to the 2019 season slate.

But even as she was putting on her game face in preparation for the Roof Systems AFT Singles presented by Russ Brown Motorcycle Attorneys Main Event, she momentarily shifted her focus to older brother Cory’s race in the AFT Production Twins season opener.

She was rewarded for that loyalty when Cory swiftly guided the No. 65 G&G Racing Yamaha MT-07 to the front of the pack and never looked back. 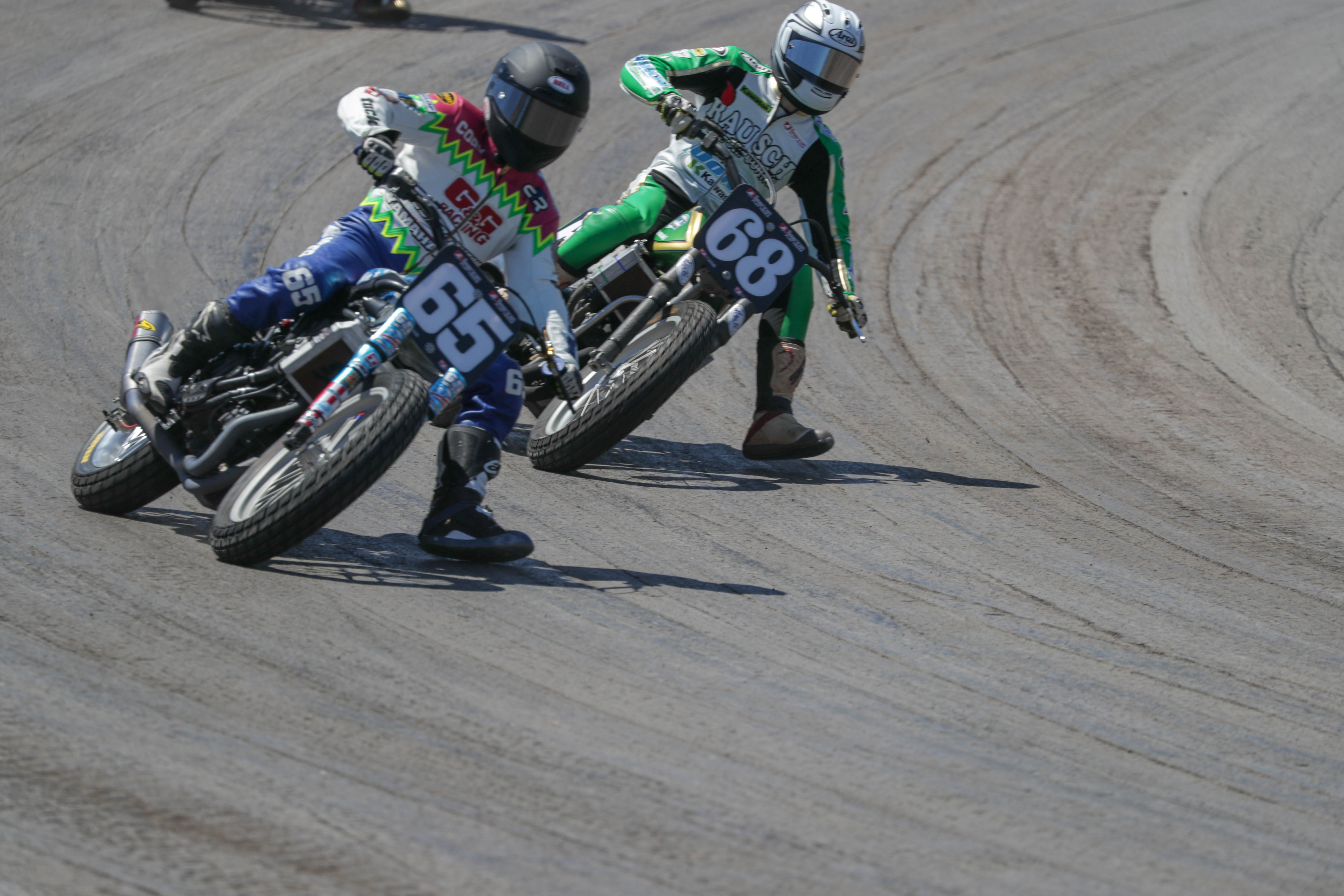 Shayna said, “I missed the start, but I was able to come up and see his pass for the lead and see him pull away. I was honestly impressed. He's been struggling the last year-and-a-half...I felt like he had it in him and had a chance to win if he rode the way that I knew that he could.” 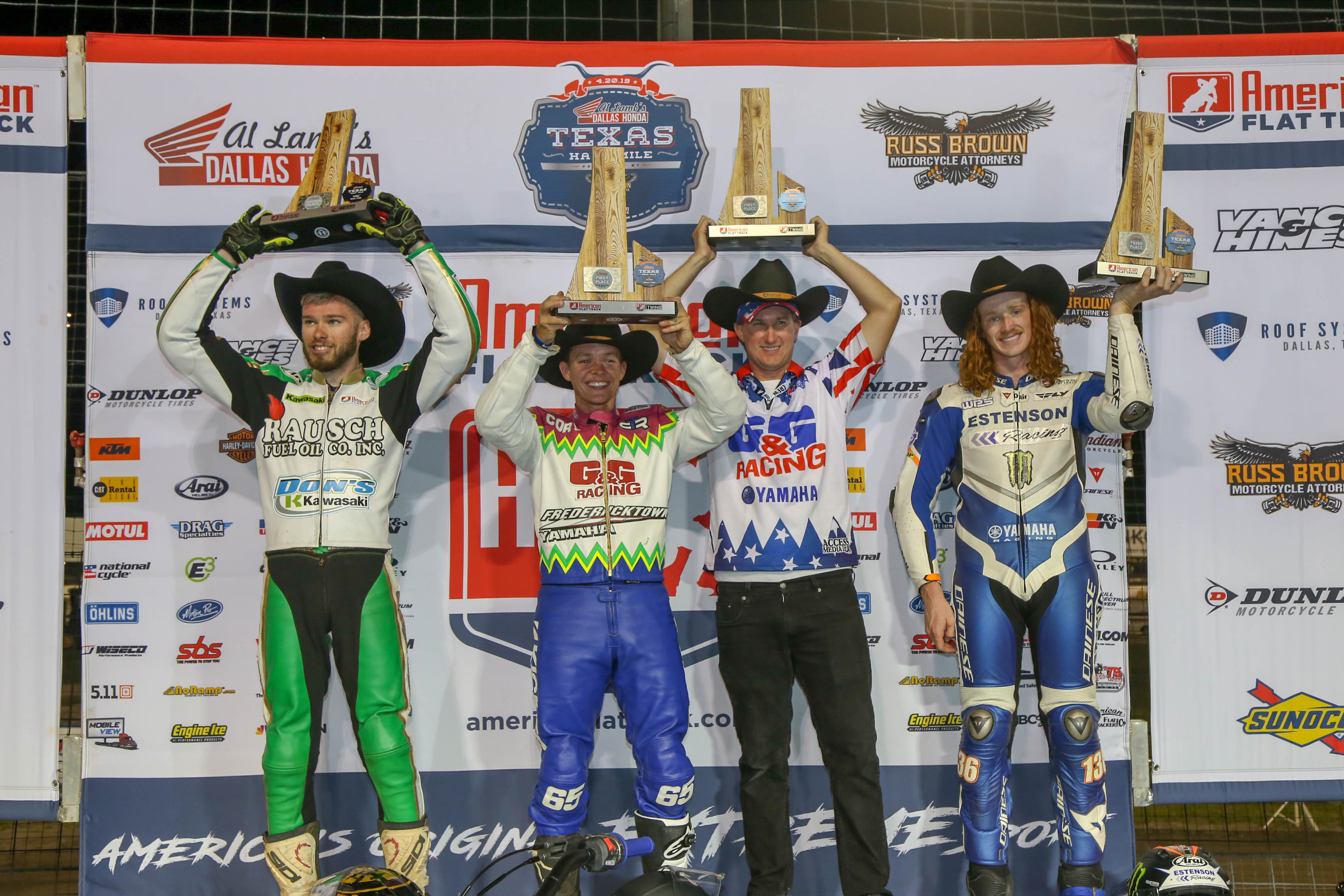 Cory returned the favor immediately after his win, quickly suppressing the excitement of his victory to see how little sister Shayna fared on the No. 52 Red Bull KTM Factory Racing KTM 450 SX-F. He even offered up some brotherly advice before the start.

“After my race, I was able to get undressed, put some stuff away, talk to a couple of fans and media, and then I heard the bikes going out on the track. I actually forgot they were getting ready to race! Going off of my Main, I gave her a little bit of advice on where to start…”

He laughed and added, “She didn't take my advice.

“Before I walked away, I said, ‘This is your race to lose. You've got this.’ And soon as the lights turned green, she just sat there on the line. ‘Are you serious?’”

Shayna confirmed the story but downplayed its impact. She said, “He told me not to go to the top, but I knew I was going to. I had started there all day. Honestly, what happened was just a rare moment. I almost started to go when the light went to the second yellow. So I had to quickly pull the clutch back in and the light went green. I stuttered. My start wasn't anything to do with the track -- it was on me.”

All that sluggish start did was open up the opportunity to add some new clips to Texter’s career highlight reel. She was in vintage form, slashing through the pack while executing a bevy of improbable overtakes.

Cory said, “I'm her biggest fan, so I was hurting to see she got such a bad start. At that point in time, I was hoping she could salvage a fifth, maybe -- maybe -- get a podium. And then I saw her dive into Turn 1. The whole first lap she was super aggressive. 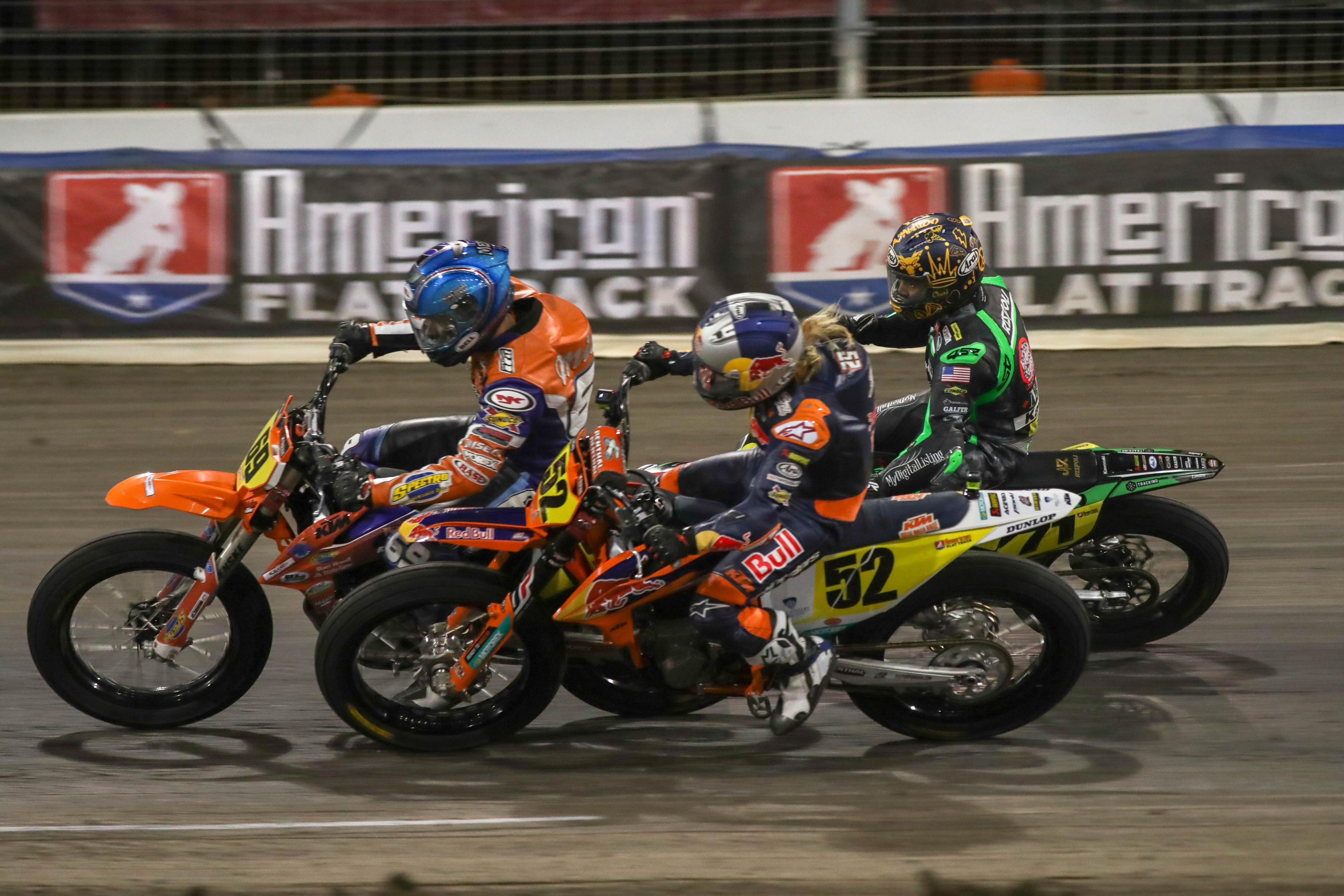 Overcoming a terrible start, Shayna carves her way through the field of competitors.

“It was cool to watch her do her thing. It was a little stressful being her brother and watching her make passes that I would have thought were impossible. But when she rides like that, there's no one else in the sport who can do that... I mean, even at the top level -- like Mees and those guys. When Shayna decides she's going to win the race, she's going to win the race.” 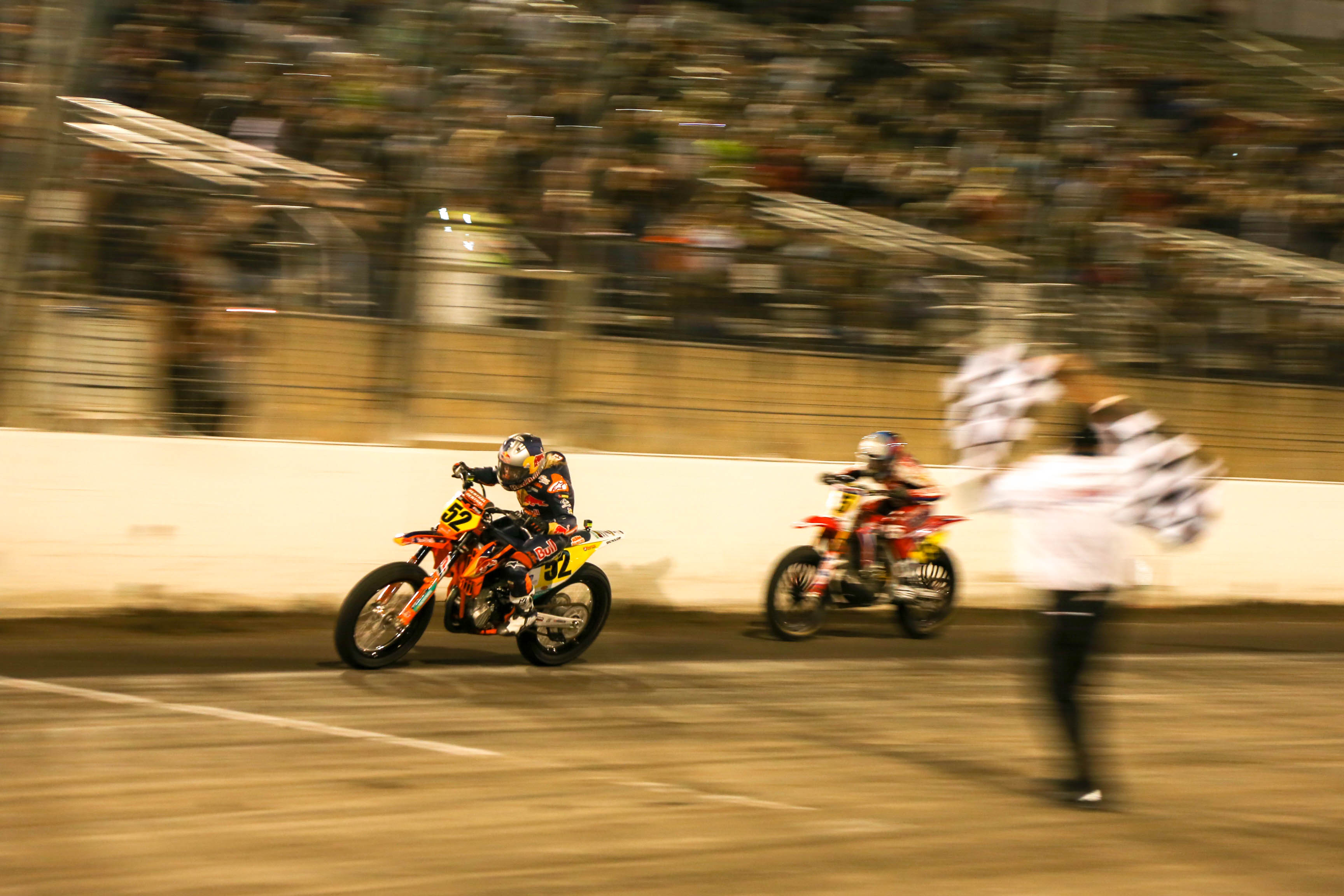 It’s truly a rare moment when a family of professional racers can be wholly satisfied at the end of an event. Even a first- and second-place night would result in joy saddled with some qualifiers -- the winner and first loser.

That harsh reality has been even more stark for the Texters, who over the years have typically seen one up while the other was down.

In 2016, Cory established himself as one of the nation’s ten best racers and twice finished on the podium in the premier AFT Twins class. That same season, Shayna only managed to qualify for a single Main Event and scored just two points.

The following year, Cory ended up outside the top 20 in points while Shayna was ripping off race wins and contending for the Roof Systems AFT Singles championship.

Cory joined Shayna in AFT Singles competition last year, but failed to find the expected results. He concluded the season ranked 15th while Shayna was again posting multiple victories and fighting for the title.

“It's been kind of annoying, because she'll do well and I'll struggle...” Cory said. “And there for a couple years, I was doing well and she was struggling. It's been a little bit of a teeter-totter for us.

“All of last season, I kind of struggled on the Single and everyone thought for sure we'd be on the podium together. At Rapid City, we got really close. She won, but I got passed in the last corner for the podium and ended up fourth. That was pretty disheartening.”

Shayna seems every bit as excited about Cory’s resurgence as she is for her own continued success. “Growing up with my brother and living with him as long as I did, I feel like I know him almost better than anybody else. I know what he's been going through. We've all, at some point in our careers, been in that spot. ‘When is my luck going to come back around? When am I going to start winning again?’ It was the same for me when our dad passed away in 2010, before I finally got that first win in 2011. 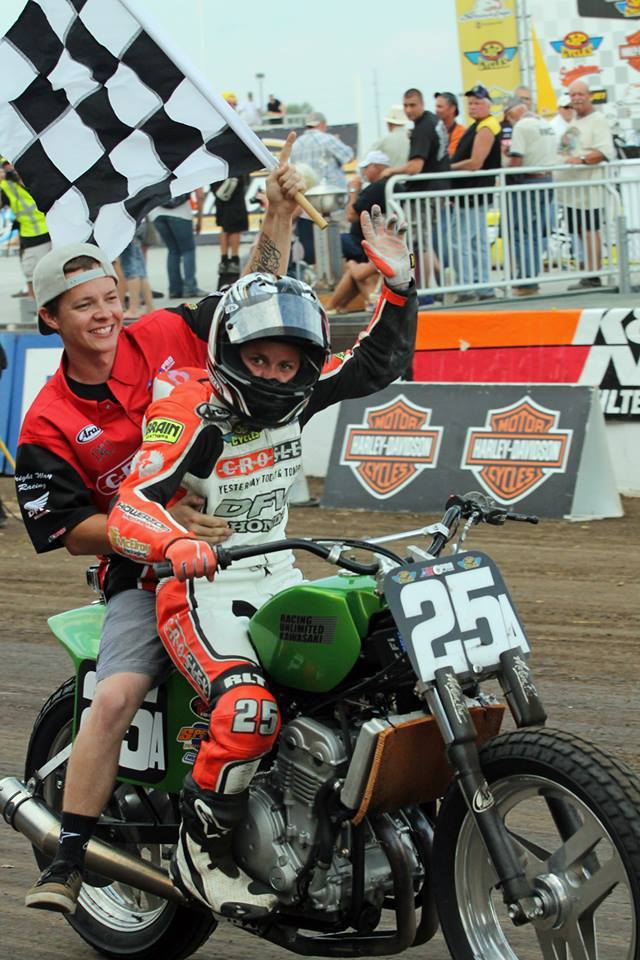 “I honestly didn't know if he was going to get past that slump. A lot of things in his life have changed -- having a son and things like that. You start thinking a lot more as you get older and you're no longer that young teenager who's not afraid of anything.

“To see him come up through the field and ride the way that everyone knows he can... shoot, he's podiumed Grand Nationals before. I never doubted his ability. It's more so that I just didn't know where he was at mentally. I talked to him yesterday, and I said, ‘Now that you're there, you've just gotta keep rolling and keep attacking it the same way you did last week.’”

The turnaround happened so fast that it took a little while for the monumental nature of their joint achievement to set in.

Cory said, “Honestly, I didn't know how well I'd do heading into Dallas… But I've always felt that when I'm comfortable, and I'm riding 100%, I'm as dangerous as anybody out there in terms of being able to win races. Before the race, I was pretty confident and I told my crew on the starting line that I wasn’t letting this one go easily. I wanted it bad. I just have a different sort of motivation than I've had in years past.

“I was happy I won, and I was happy she won, obviously. Like I said, I'm her biggest fan, and I've supported her since day one. But it wasn't until I was on my (22-hour) drive home that it really hit me: we both won on the same day at the highest level.

“It was a bit emotional to consider that once I actually sat back and thought about it. It's pretty special.”

Shayna seconded the sentiment. “It was definitely a special day. My family back home -- they were stoked. And I can only imagine what everyone up above was thinking -- my dad, my grandfather, and my friend, Scuba Steve. It was super cool to be able to win and know that they're watching from above, smiling down on us, and probably having a party.” 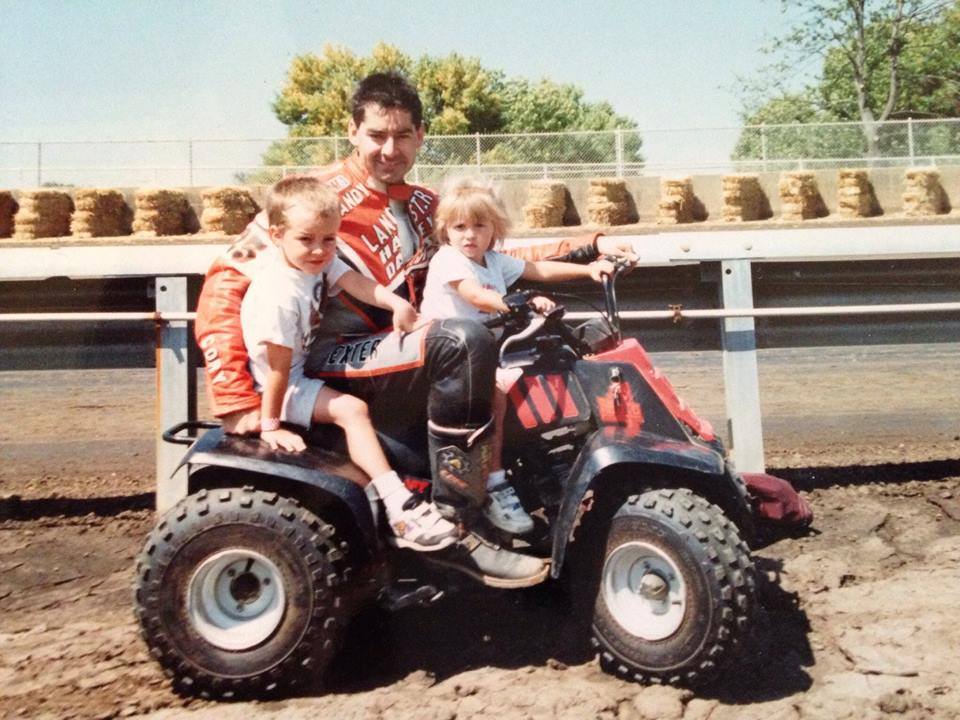