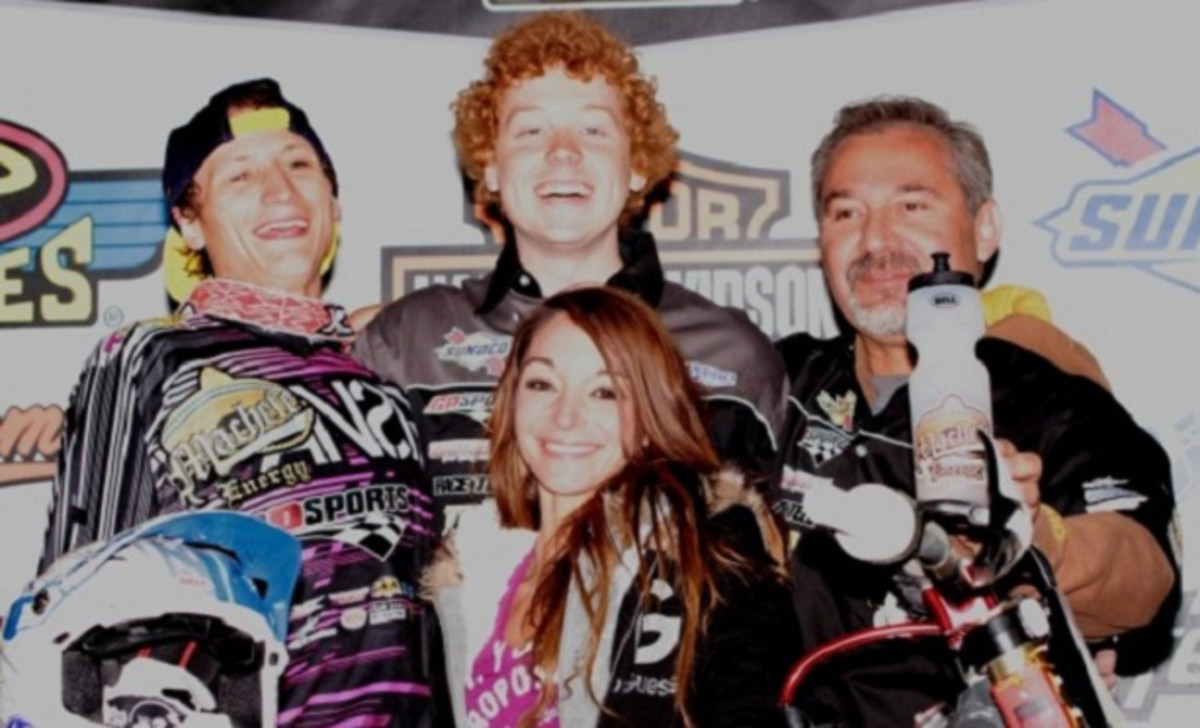 DAYTONA BEACH, FL, MAR. 14, 2013 - AMA Pro Grand National Championship racing is the top flat-track series in the world that travels to major markets across the country. Broken down into two classes, the Grand National Experts compete on twin-cylinder machines for the half mile and mile tracks, and on singles-cylinder 450s on the short tracks and Tourist Trophy (TT) venues, while the J&P Cycles Pro Singles class is for racers taking the big step to professional racing from amateur racing. Championship points crown the number-one riders in Grand National Expert twins, singles, combined, and J&P Cycles Pro Singles.

The anticipation in the air was thick as limestone, as the fans were ready for the best racing on the planet, as were the racers, from the new champion, Jared Mees, to returning 2012 round-one winner Johnny Lewis, who may still have issues about the round-two collision that occurred in the battle for the lead of that main event. This season had one of the most exciting starts in memory, as the fields of Experts and Pro Singles riders keep growing and polishing their talent.

Looking over the field of racers, including many past winners and new challengers, there is simply no way to predict a winner. In the first practice, there were 41 Grand National Experts and 40 J&P Cycles Pro Singles within one second – what other sport is this close?

In Pro Singles qualifying, Michael Inderbitzen topped the speed charts, with 59 entries within one second and only 32 making the further qualifying heat races, opening up another great season for the supercompetitive Pro Singles class. Jason Isennock and Brandon Wilhelm rounded out the tops three, separated by eighty-three-thousandths of a second. With the field set, the AMA Pro Racing show quickly moved into the Pro Singles and Grand National Experts heat races.

AMA Pro Racing formula allows the fans into the paddock for an hour between qualifying and the big show to see and meet the racers, teams and series marketing partners. Judging by the size of the crowd filling the paddock, it works!

Kicking off the opening ceremonies, AMA Pro Racing announcers Barry Boone and Scotty Duebler rolled through introductions of series marketing partners and new Grand National numbers for 2013, as well as the Champion of the Combined and Expert Singles, Jared Mees, along with Kevin Anderson, Duke Erickson and Briar Bauman.
In the Pro Singles class, the top seven of the two heat races would transfer directly to the main, while eighth through 16th would move on to a last-chance qualifier, from which the top two would also move to the main, for a total of 16 riders.

In the first Pro Singles heat, Kyle Johnson started the racing for 2013 with a pass on lap five to move Brandon Wilhelm back to second. J.R. Addison stayed in tight formation.

Kyle Johnson (77) made the pass for the lead in his first-ever J&P Cycles AMA Pro Singles event.

In the Grand National Expert Singles, the top four from three heats would get direct transfers to the main, with the top two going to a Dash For Cash shootout; the balance of fifth through 16th would go to two semifinals, from each of which two would transfer to the 16-racer main event.

Jethro Halbert put on a masterful ride in heat two, despite pressure from Jared Mees. Meanwhile, Mikey Rush was picking his way forward from sixth, sending Byran Smith and Johnny Lewis backward. At the same time, Robert Pearson slipped from a safe third back to fifth, sending himself to the semifinals.

There is hardly a race in which Brad Baker competes that he isn’t in front, so to the delight of the fans, the duel between Baker Jake Johnson in heat three was epic! With years of racing experience to draw on, Johnson tried every move in the book, looking for a pass that would stick. Baker led one more lap than Johnson, although Johnson led the lap that ended with checkers on the flag. Scott Baker (Brad’s brother) was stalked by Steven Bonsey, and they rounded out the top four.

Next up was the Pro Singles last-chance qualifier. These guys (and gal) struggle so hard in this tightly wrapped field of talent. Three rows of six riders got set on the line, ready to battle it out for the last four spots in the main. Robert Lewis took the lead, taking William Cato along with him. Robert Spencer Jr. and Shayna Texter grabbed the last two slots on row three of the main.

The Dash For Cash was all Jared Mees’, from his rocket start to his flag-to-flag win. The slicing and dicing was all behind him. This was four laps of the fastest six from the Grand National Expert heats. Behind Mees, it was Henry Wiles, Jake Johnson, Jethro Halbert, Brad Baker and Brandon Robinson.

Steven Vanderkuur (1) saw his night end early with a crash that took out a cooling hose on his new Yamaha 450.

Jason Isennock’s Highs Dairy Stores/ Foard Racing/ Carroll Branded Fuels/ WKR-sponsored Honda stalled, and it took most of the two-minute time limit for him to refire the engine. Jason collected himself for the 16 laps ahead.

From the start, it was display of talent and motorcycle control on the challenging limestone surface among the top four. Kyle Johnson and Poe switched the lead two times, with Poe leading a total of nine laps. New-guy-on-the-circuit Kyle Johnson took the checkers, and he and Isennock and Poe all headed to the victory podium for a celebration.

After a few deep breaths, the near-capacity crowd welcomed the Grand National Expert Singles to the starting grid for their main event. On the pole was Brandon Robinson. Joining him on the front row of the grid were Jake Johnson, Jethro Halbert, Henry Wiles, Brad Baker and Jared Mees. Row two was comprised of Kenny Coolbeth Jr., Scott Baker, Mikey Rush, Jeffrey Carver Jr., Steven Bonsey and Johnny Lewis. On row three were Matt Weidman, Briar Bauman, Robert Pearson, Bryan Smith, Donald Mullen II and Kayl Kolkman. There was lots of energy and anticipation in the air as the starter got ready to set the fast company loose for 25 laps.

Nailing the start was Dash For Cash winner Jared Mees, but he was quickly overhauled by Brad “The Bullet” Baker, who took the lead. Mees would fight a losing battle for the point position.

On lap six, Briar Bauman collected a soft bale on the back straight, launching himself completely off the ground, and that ended his shot at a top-10 finish. seems he had enough after the close call.

Briar Bauman (14) recovers after hitting a soft bale on the back straight during the Expert main event.

Meanwhile, Rush came up from seventh place, picking off Jake Johnson, Jethro Halbert, Henry Wiles and Brandon Robinson by lap seven! Rush had a clear view of Brad Baker now, and the two put on a show, dicing for the lead until lap 18, when Rush found that extra speed and traction to finish off Brad’s time in the lead.

Mikey Rush takes Tandra Barci and Scott Horton along on his victory lap. It’s easy to see how winning at Daytona can affect people…