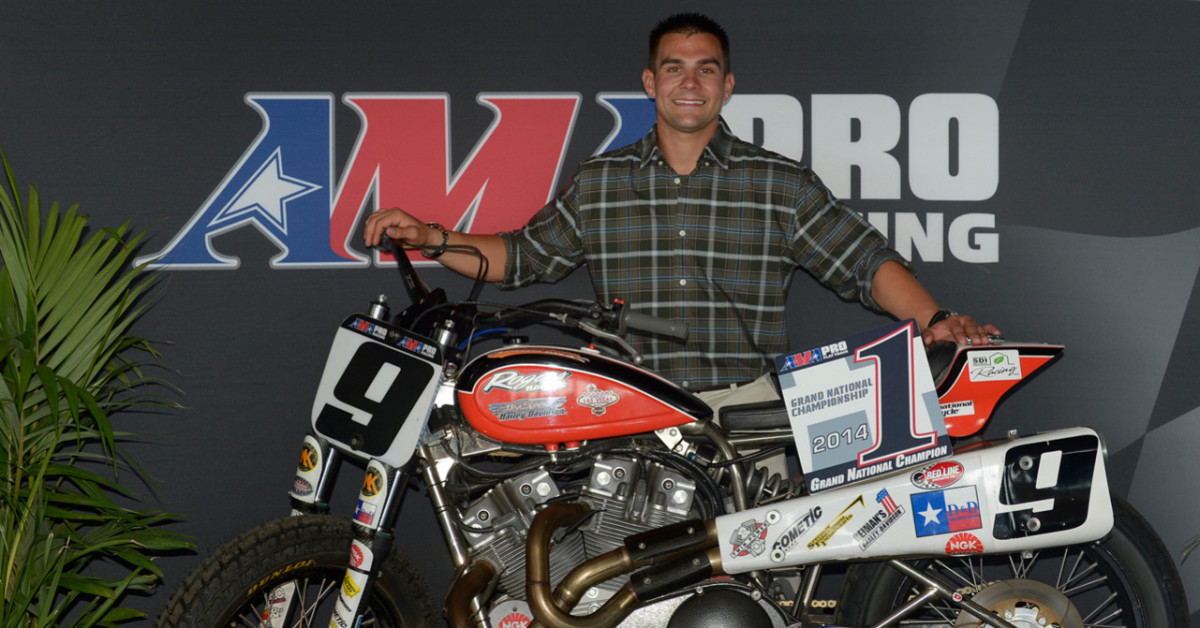 POMONA, Calif. (Oct. 13, 2014) – The 2014 AMA Pro Flat Track season came to a thrilling end, with both the Grand National Championship Expert and Pro Singles titles being claimed by the tightest of margins at the Flat Track Finals at the LA County Fairplex on Saturday.

Sunday, following the exciting night of races, the champions and other riders of note were lauded at the yearend awards ceremony held at Pomona Valley Mining Company.

The voices of AMA Pro Flat Track Barry Boone and Scottie Deubler hosted a fun afternoon that included multiple looks back at the 2014 season in addition to the distribution of awards and checks.

GNC champion Jared Mees was awarded the No. 1 plate by the American Motorcyclist Association’s Joe Bromley, and he was joined on stage by the Rogers Racing Harley-Davidson he rode to fourth place in the season finale to clinch the title by three points over Bryan Smith.

Pro Singles champion Kyle Johnson also received his No. 1 plate from Bromley after finishing second in Pomona and taking the championship by a single point over Davis Fisher.
Jarod Vanderkooi was awarded the No. 1 plate for winning both Pro Twins races this season, as well.

Johnson is awarded a national number for being the Pro Singles champion, but other riders who earned their national numbers were recognized, including; Jay Maloney, Danny Koelsch, Shayna Texter, Cody Johncox, Chaz Landers, Ronnie Jones and Colt Chebultz.

After 16 rounds, the winners of the Sunoco “Go The Distance Award” were honored and presented with checks for being the riders who completed the furthest distance over the course of the 2014 season. In Pro Singles, the $2,000 winner’s check went to Bronson Bauman. Mees received a check for $3,000 for being the top Expert rider in terms of distance traveled. Mees also received $1,000 from Cortech for winning the “Performance Edge Award” as the rider who recorded the most fastest laps in main events in 2014.

Bryan Smith’s Villa-Esparza/Crosley Radio team was recognized with the “Team Excellence Award’ for their professionalism throughout the year, and Jeffery Carver Jr. was awarded the “Outstanding Performance” award, mainly for riding so many different bikes and remaining competitive over the course of the season.

Saddlemen’s Tom Seymour was on hand to congratulate the Saddlemen GNC Rookie of the Year, Wyatt Maguire, who made seven main event appearances in this first season in premier class.

Pro Singles runner-up Fisher was the recipient of a special award, the Brintlinger Award for Excellence in Sportsmanship, which was voted on by members of the AMA Pro Flat Track paddock.

Craig Parkinson of Parkinson Brothers Racing, accepted his award for Pro Singles Mechanic of the Year, and Honda was named the Manufacturer of the Year in the class.

In addition to Johnson and Fisher being honored, Pro Singles third place finisher Ryan Wells was given a check for $2,000 along with a trophy.
GNC Mechanic of the Year honors went to Kenny Tolbert and Sammy Sweet of Rogers Racing and Kawasaki was named the Manufacturer of the Year in GNC competition.

The largest checks were saved for last as the top three finishers in the GNC standings were honored. Jake Johnson was third and received $4,000 and a trophy. Smith took home a check for $6,000 with his trophy. Mees was awarded $10,000 in addition to the coveted No. 1 plate, and was also recognized with a stunning Rolex watch presented by Thom Duma of Thom Duma Fine Jewelers.

Thunder MultiMedia provided three excellent videos, including a fun look back at the personalities in the paddock and recaps of both the Pro Singles and GNC seasons.

A special No. 1 plate was presented to Dave and Kathy Hoenig for their many years of dedication to the sport of flat track. The couple has attended 444 Grand Nationals, including 369 consecutive.

The event served as a fitting end to an entertaining 2014 AMA Pro Flat Track Season with excitement already beginning to build for 2015.