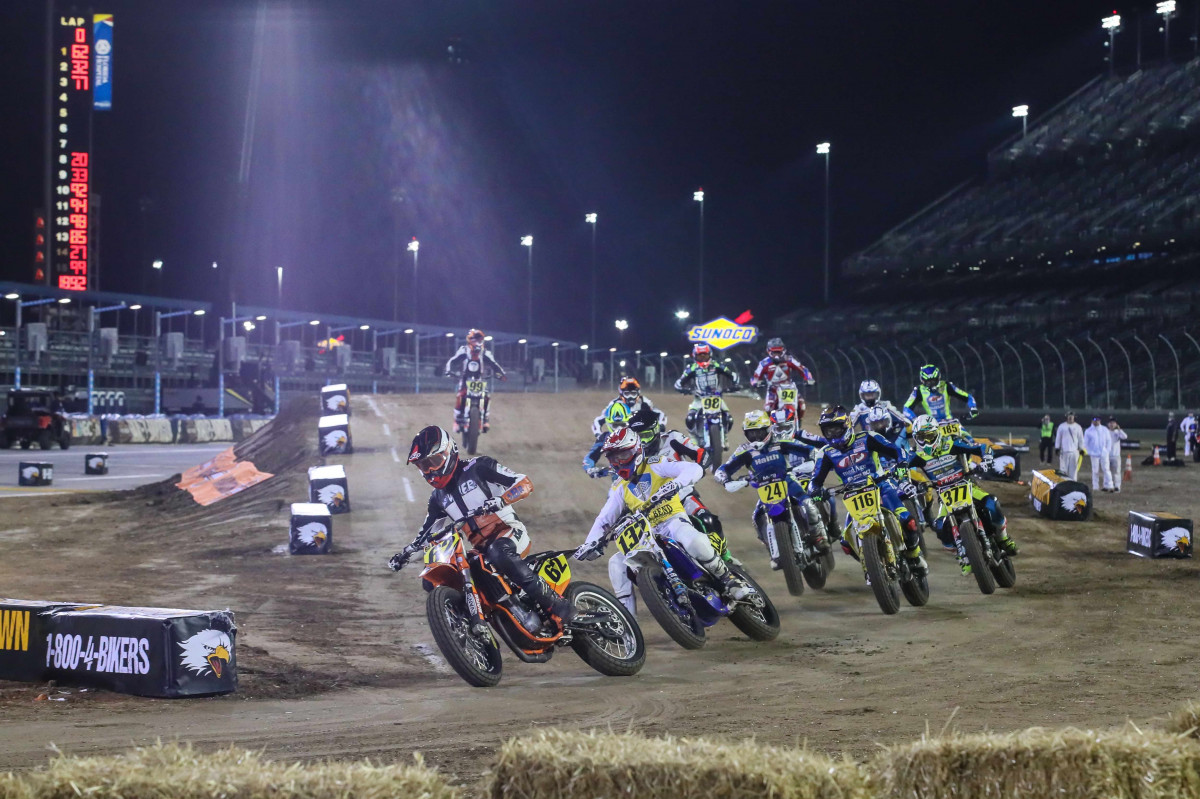 DAYTONA BEACH, Fla. (April 5, 2018) – The 2018 AFT Singles opener in Daytona proved to be a tough outing for many of the preseason AFT Singles title favorites. That somewhat surprising result only ratchets up the intensity heading into Round 2, setting the stage for an unusually important event so early in the season.

Chief among the unfortunate crew is reigning class champion Kolby Carlile (No. 1 Estenson Racing Yamaha YZ450F). Carlile was able to earn last year’s AFTS crown despite going winless on the season by putting himself near the front week-in and week-out. That was true at the season’s two Short Track races, albeit not quite to the same degree as the other disciplines. His seventh at the Atlanta Short Track and eighth at the Springfield ST were among his worst finishes of the season – evidence of just how solid an all-around performer he was last year.

The opening round of Carilie’s title defense was cruelly cut short due to a crash and resultant injury at Daytona, but not before he showed the speed to battle for victory. Despite that setback, if Carlile rebounds with a ride in line with last year’s ST efforts, he’ll be right back in the mix. And if he does significantly better than that, say a finish on the podium – perhaps even a victory – that would serve as a dire warning to the rest of the field that the reigning champ is stronger than ever before.

“At Daytona, I felt amazing,” Carlile said. “All the hard work I put in over the winter paid off... until we had that crash. That was something that I can’t allow to happen. I hurt my shoulder blade during that crash, and I immediately went home to New York to see my doctor and start healing. I’m feeling better and better every day, and I will be at Atlanta ready to basically start my year after scoring zero points at Daytona. 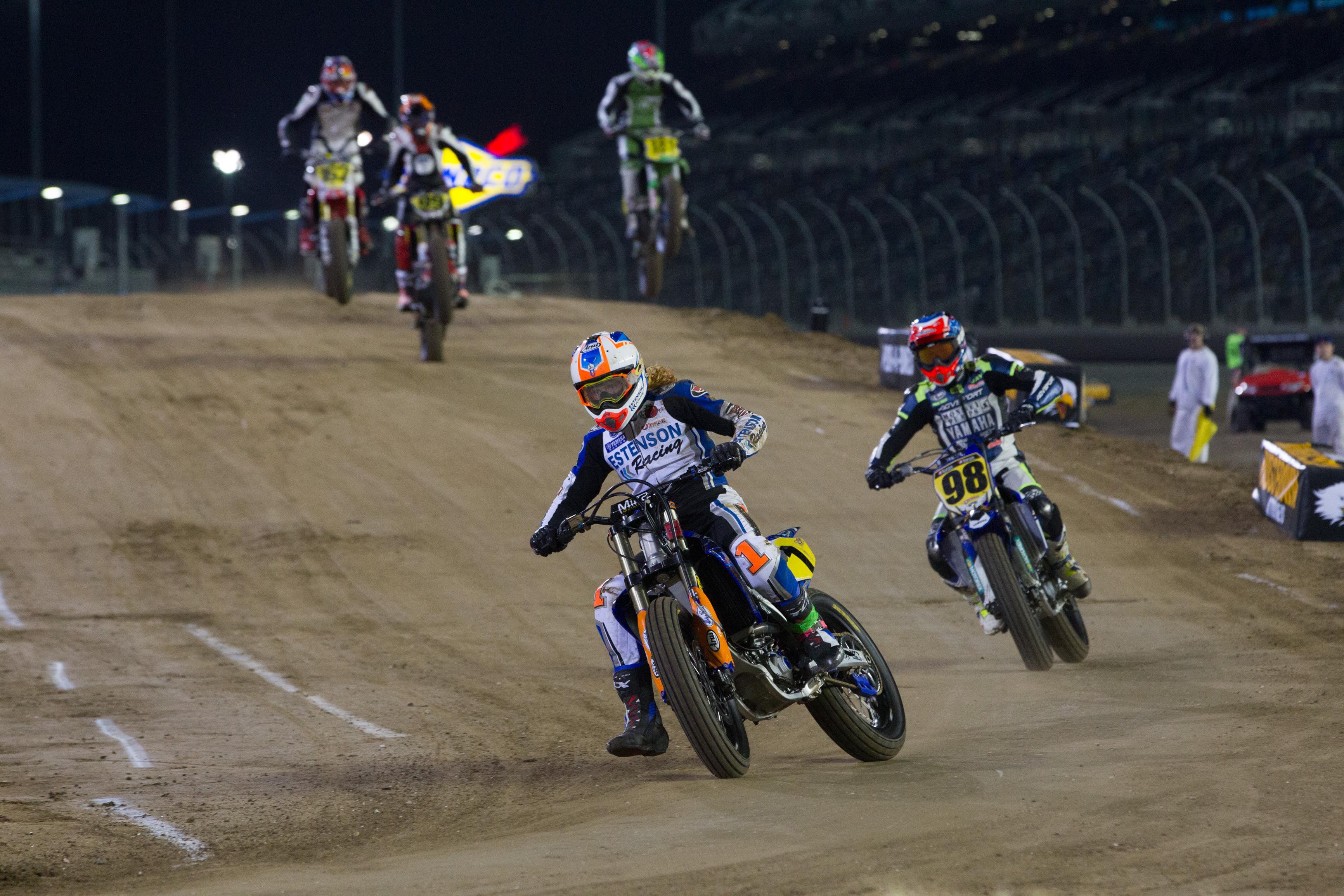 2017 AFT Singles champ Kolby Carlile rode his Yamaha heroically in his Semi, rebounding from a nasty crash and slashing through the pack well enough to make the Main. Unfortunately, his injured shoulder kept him out of the final.

“This year, the way I am riding, I am very confident that I will be up to speed fast. I was never worse than second all day in Daytona including qualifying, so that makes me happy knowing that me and my bike are working well together right off the bat. I feel good right now; I’m ready to start attacking again for my second championship.”

2017’s fifth-ranked AFT Singles rider, Kevin Stollings (No. 99 Roof Systems Honda CRF450R), collected just four points for 15th at Daytona, while the TT woes of Shayna Texter (No. 52 ST52 Husqvarna FC450) continued as she once again failed to make the Main Event while breaking in a brand-new – and nearly box-stock – machine and program.

Last season, Texter and Stollings bounced back strong under similar circumstances; Stollings finished second in Atlanta and Texter third coming off of their respective zero-point performances in the 2017 DAYTONA TT.

Texter said, “My team came together a little slower than I would have liked this season, but we were able compete at Daytona – a bit of victory in itself. I am very excited with how the Husqvarna motorcycle feels, and the way I rode in Daytona with so little testing time. I felt I picked up my TT game a lot more than last year, and I felt a lot stronger on the track. I will continue to work on strengthening my TT game as we go along this season. 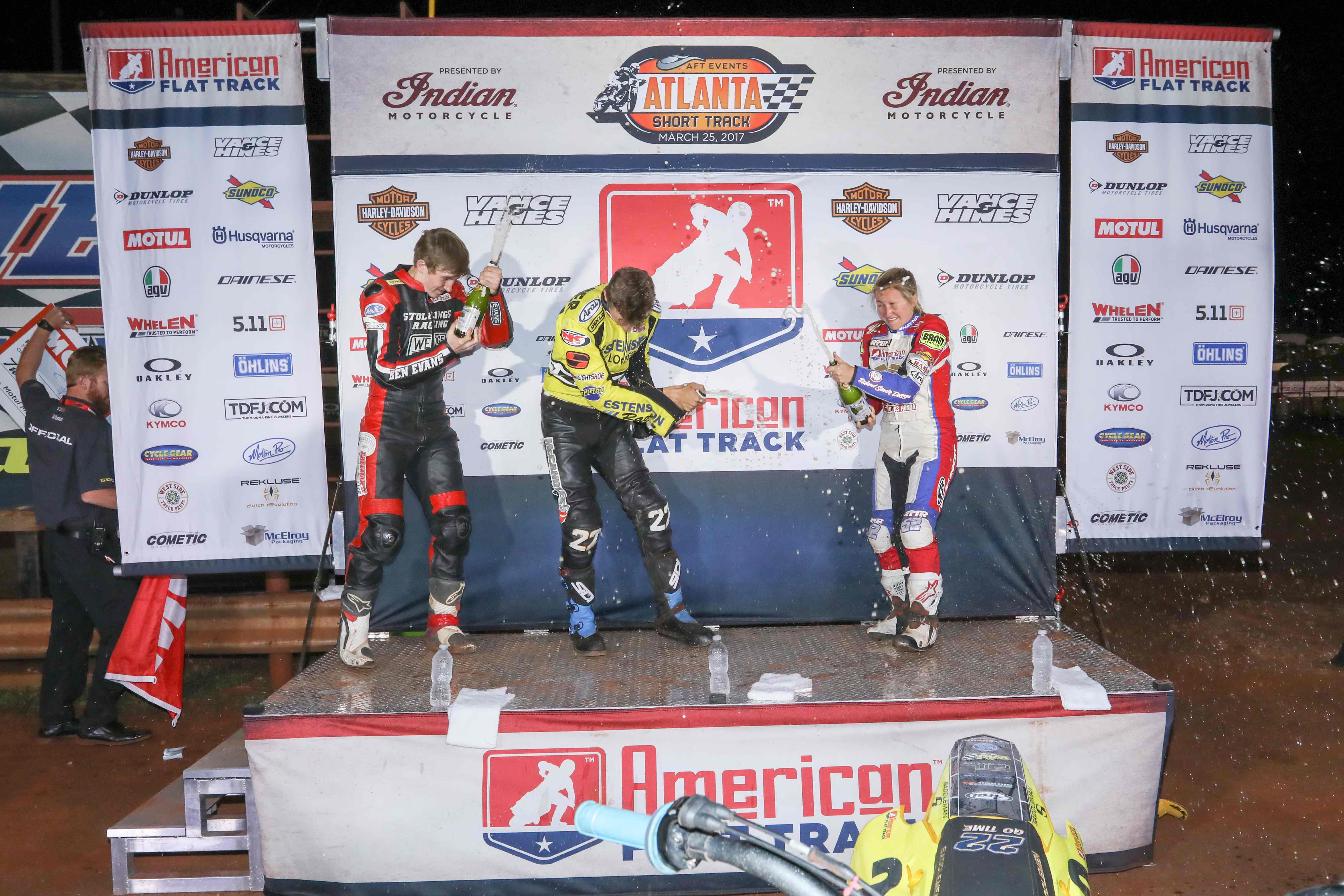 Shayna Texter (right) celebrates alongside race winner Dalton Gauthier and runner-up Kevin Stollings at least year's Atlanta Short Track. Texter will be looking for another box appearance this weekend on her Husqvarna FC450 at Dixie Speedway.

“I’m looking forward to the Atlanta Short Track event. And with some testing happening the weekend before, I feel confident we’ll continue to improve and get back on the box.”

Keep an eye out for 2016 class champ Ryan Wells (No. 94 RMR/Al Lamb’s Dallas Honda CRF450). Wells had a somewhat quiet outing in his return to AFTS competition, finishing at the tail-end of the top ten in the 2018 opener. He’s twice won at Short Tracks in the past, and a third ST victory would go a long way toward re-establishing Wells where he expects to be in the Singles class’ hierarchy.

Despite all of those big names feeling the pressure to come up huge this weekend, the rider to beat might well prove to be DAYTONA TT victor Dan Bromley (No. 62 Big Momma & Daddy Deep Pockets Racing KTM 450 SX-F). Not only does Bromley have momentum on his side, he also stands as the field’s most-recent Short Track winner with a victorious performance in last September’s Springfield ST. 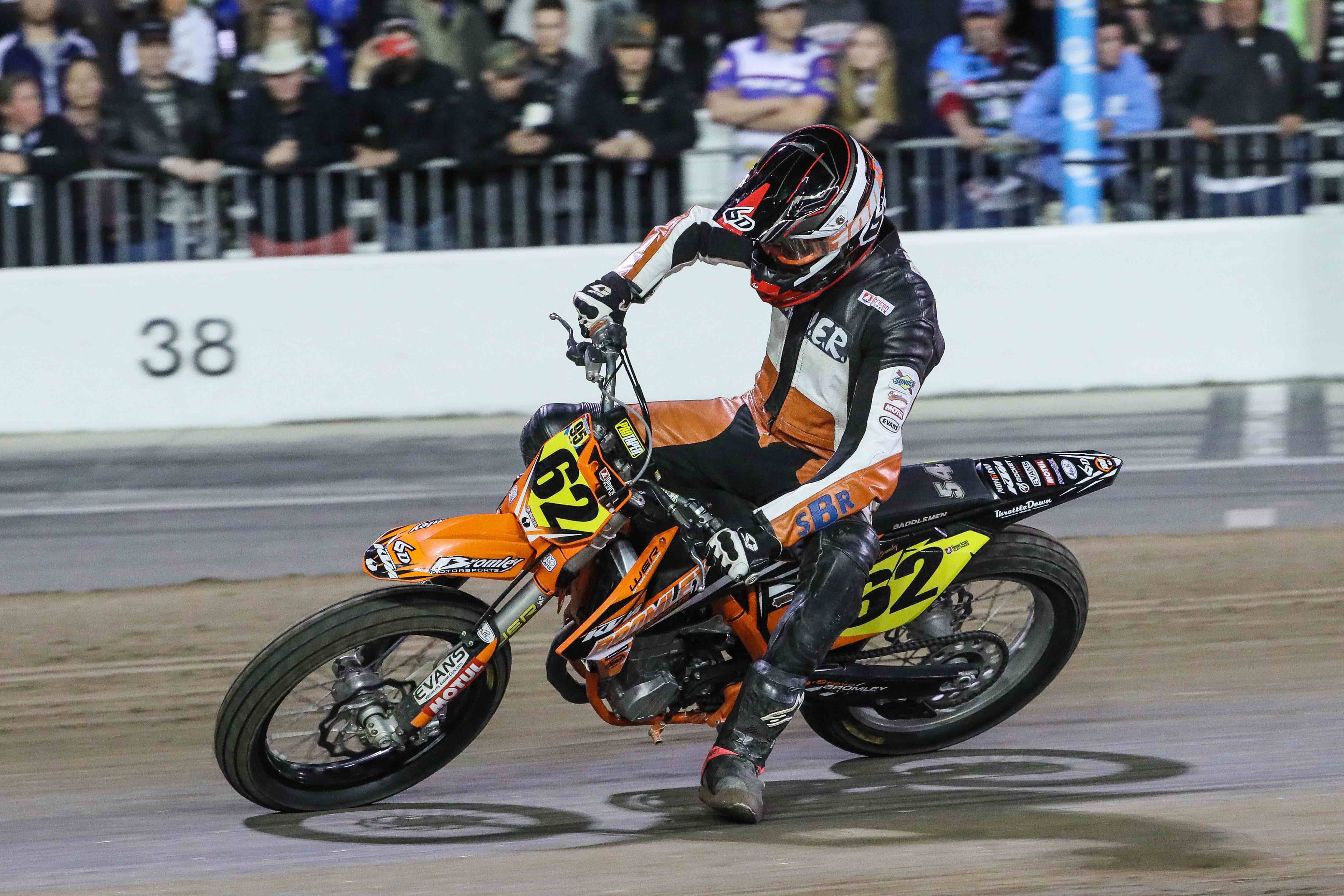 DAYTONA TT winner Dan Bromley had some help from crashed-out contenders, but he rode flawlessly and fast, dominating at Daytona. He's hoping to repeat the scene again this weekend on his KTM in Atlanta.

Live coverage of the Harley-Davidson Atlanta Short Track presented by Hellbender Harley-Davidson can be viewed on FansChoice.tv beginning at 2:00 p.m. ET on Saturday, April 7, with Opening Ceremonies scheduled for 6:00 p.m. ET. Tickets are on sale now and can be purchased at https://www.showclix.com/event/atlanta-short-track.