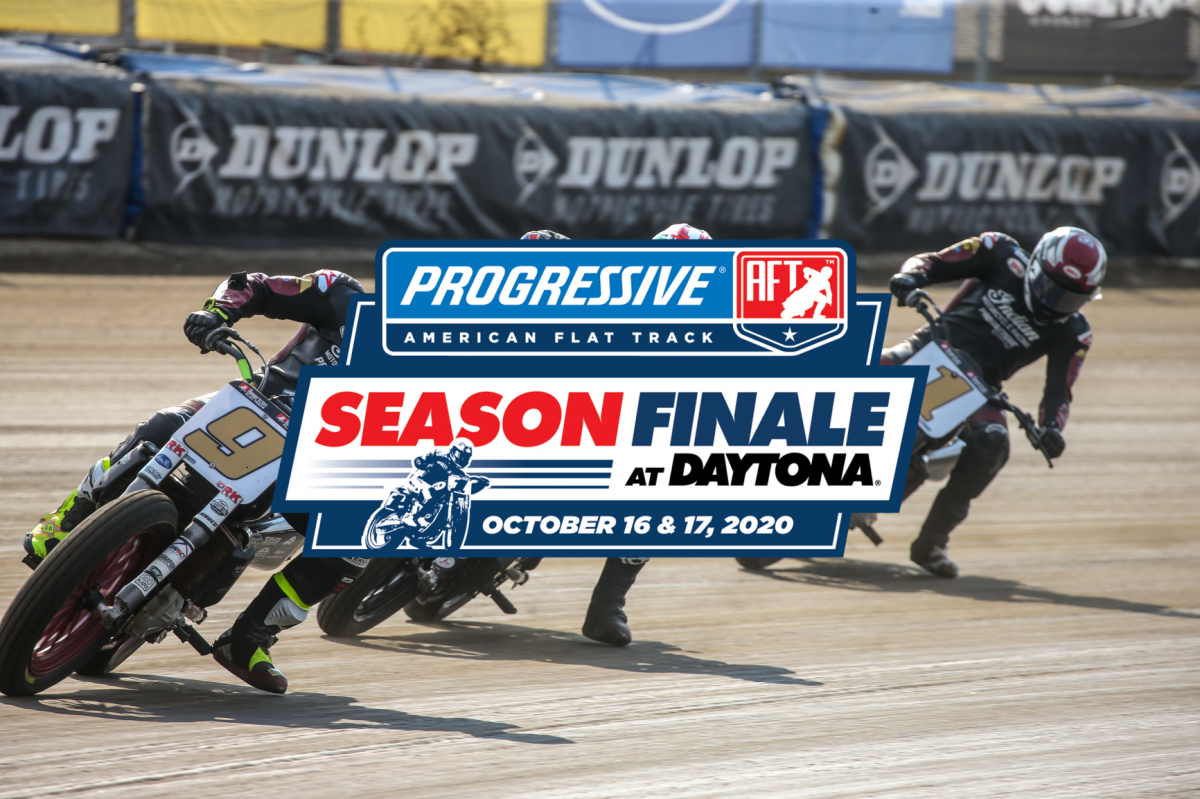 DAYTONA BEACH, Fla. (October 13, 2020) - Following months on hiatus due to a global pandemic, a reshuffled schedule, and 13 rounds of a heavyweight title fight, it all comes down to this. Progressive American Flat Track will conclude its epic 2020 season and crown the year’s AFT SuperTwins presented by Vance & Hines Champion in this weekend’s Progressive AFT Finale at DAYTONA I & II at Daytona International Speedway, on Friday, October 16, and Saturday, October 17.

The prestigious premier class championship is still very much up in the air; teammates, preseason co-title favorites, and archrivals Briar Bauman (No. 1 Indian Motorcycle/Progressive Insurance FTR750) and Jared Mees (No. 9 Indian Motorcycle/Progressive Insurance FTR750) are set to square off and determine the ‘20 Grand National Champion between them on the always unpredictable DAYTONA Short Track.

As a result of last Saturday’s race cancellation, reigning champion Bauman enters the finale with a nine-point advantage. That margin provides Mees one overriding mission: sweep both races -- as he did in the year’s only other ST doubleheader -- and he’s guaranteed the crown.

Bauman’s marching orders aren’t quite as clear cut other than the fact that above all else, he needs to prevent Mees from winning both Main Events. Should Bauman earn a victory in one of the doubleheader’s twin Mains, he’d only need to finish eighth or better in the other one, even if Mees happened to collect a win and a runner-up result on the weekend.

However, even though Bauman and Mees have won 11 of 13 races between them this season, it’s far from a certainty they’ll dominate again this weekend no matter how high the stakes. A look down the past winner’s list at the DAYTONA ST shows a huge range of names, including current competitors Sammy Halbert (No. 69 Coolbeth-Nila Racing Indian FTR750), Jake Johnson (No. 5 R/J Performance Racing/Hite Trucking Indian FTR750), Brandon Robinson (No. 44 HCRR Racing/Ben Evans Racing Indian FTR750) and Bryan Smith (No. 4 Harley-Davidson/Vance & Hines XG750R Rev X).

Bauman, incidentally, earned his maiden career premier-class win at the DAYTONA Short Track back in 2014. Mees, meanwhile, doesn’t count a victory at the track among his 53 career wins.

The stage is properly set for an explosive finale.

Defending AFT Production Twins king Cory Texter (No. 1 G&G Racing/Roof Systems Yamaha MT-07) has turned it on as of late in a desperate bid to retain his title. Two wins and a second in his last three outings have provided him a mathematical chance to repeat, although he’s going to need plenty of help to pull it off.

James Rispoli (No. 43 Latus Motors Racing Harley-Davidson XG750R) has been the pick of the AFT Production Twins field in 2020, racking up seven wins, four seconds, a fourth, and a fifth en route to stacking up a 38-point advantage. Even if Texter sweeps the final two races, Rispoli needs just 12 points on the weekend (a single seventh-place finish or a pair of 13ths would be enough). In other words, “the Rocket” simply must avoid catastrophe.

The AFT Singles presented by Russ Brown Motorcycle Attorneys championship is already decided thanks to an utterly crushing season’s effort on the part of Dallas Daniels (No. 32 Estenson Racing Yamaha YZ450F).

Daniels locked the AFT Singles title up three races early by piling up eight wins to the opposition’s combined five. With the newly crowned champ freed up from any championship concerns, you can expect him to eagerly go to battle with a loaded field motivated to bring his win streak (now at six and counting) to an end before the year is out.

Beyond the three primary classes, Royal Enfield’s innovative BUILD. TRAIN. RACE. program will be back in action at the Progressive AFT Finale at DAYTONA to again shine the spotlight on some of the fast females of flat track.

As always, spectator safety has been placed at a premium and Progressive AFT has worked closely with local health and government officials toward those ends. For more on the specific precautions being undertaken, please consult the Progressive AFT Events Health & Safety FAQ.

Live coverage of the entire weekend’s racing activities will be available on any device for less than $1 per event via TrackPass on NBC Sports Gold.

The Progressive AFT Finale at DAYTONA I & II will air back-to-back on NBCSN on Saturday, October 31, starting at 11:00 p.m. ET/8:00 p.m. PT. The broadcasts will include exclusive features, cutting-edge aerial drone and onboard footage, and the expert commentary of Progressive AFT legend Chris Carr.