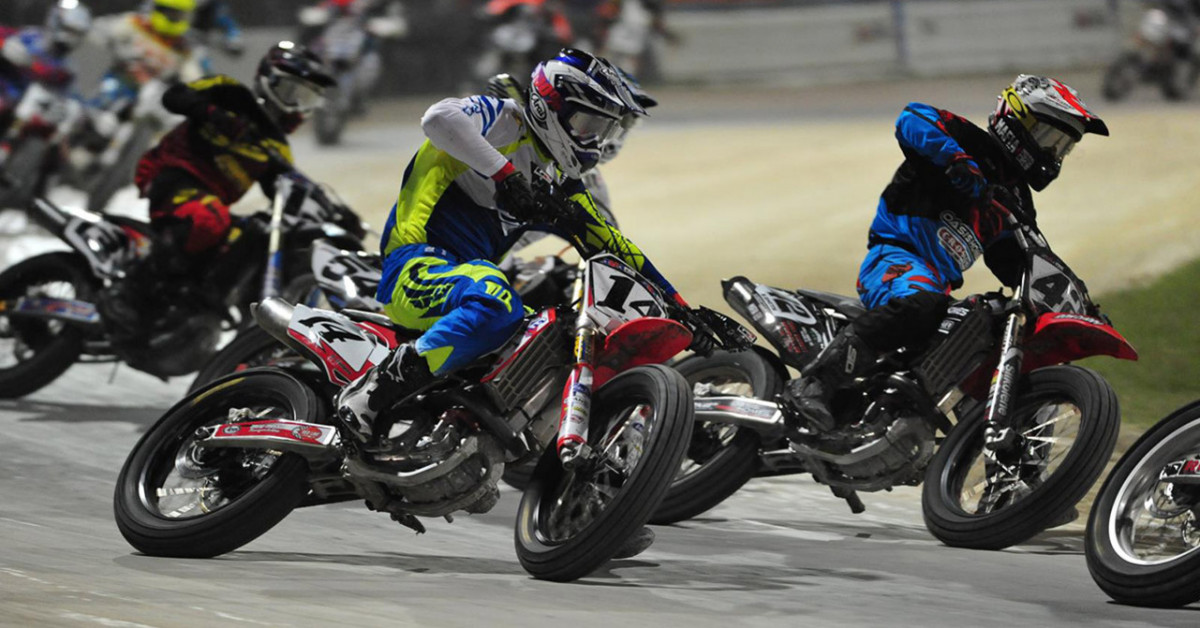 DAYTONA BEACH, Fla. (March 20, 2014) - From heartbreak to heroics, there was no shortage of drama when AMA Pro Flat Track kicked off its 2014 season last weekend with its season opening rounds at DAYTONA Flat Track in Daytona Beach, Fla. on March 13-14, 2014. Both rounds proved to be a thrilling couple days of nonstop motorcycle racing action between some of the world's most prominent dirt track riders.

Salinas, California's Briar Bauman's Round 1 effort was the one he'll want to remember most as he (Rod Lake Racing/Honda) took home the first Grand National main event victory of the young 2014 season. Bauman did so by almost a full two seconds over second place finisher and Graham, Wash. product Sammy Halbert (Vans Yamaha/Fredericktown Yamaha/Yamaha). As flawless as Bauman was in Round 1, his Round 2 performance was the exact opposite, as he finished 15th in the season's second Grand National main event of the year. However, at just 18-years-old, Bauman should and will be considered a threat to take it the distance on any given weekend.

As for Halbert, his second and fourth place finishes to begin 2014 were very impressive as the 26-year-old appears to be hitting his stride early on this season.

"It was a great race," said Halbert speaking about his runner-up finish following the first main event. "I have to give it up to Briar (Bauman); he rode great the entire race. I thought I had something for him in the middle of the race when I kind of closed on him a bit but it was a tough track and I lost some time."

After claiming his first Grand National main event victory at Daytona a year ago, Oxford, Pennsylvania's Brandon Robinson (USC Kawasaki/Kawasaki) made another impressive showing in 2014, landing inside the top-five in both main events. Robinson earned a third place Round 1 finish and came all the way back from the fourth row in Round 2 to come away with a fifth place performance.

"I was extremely happy to come from a long ways back and earn my first podium of the season," said Robinson speaking about his race one main event performance. "I kept pushing and pushing and finally got into good position where I could solidify a third place finish. My team and I worked very hard this offseason and this is a great way to start the season."

Morris, Connecticut's Kenny Coolbeth, Jr. (Zanotti Racing/Honda) earned a strong Round 2 main event win despite his forgettable 17th place Round 2 main event finish. After losing the Factory Harley-Davidson ride in the offseason, Coolbeth, Jr. was quickly scooped up by Zanotti Racing and the two look to make up quite the tandem heading into future 2014 race weekends.

"I've wanted this win for a long time and it feels amazing to finally get it," said Coolbeth, Jr. following his Round 2 main event victory. "My new team and I have been working hard all winter and I'm very excited for things to come this season and seasons beyond."

Coatesville, Penn. product and 2011 Grand National Champion Jake Johnson (Ramspur Winery/Honda) looked very average during the first round, posting mediocre practice and qualifying times and coming in 10th in the main event. However, Johnson got his bike in gear for round two, as he won the Dash for Cash and finished second in the night's main event and boosted his position in the points all the way up to second before exiting Daytona.

"I was feeling a little rough during round one," said Johnson. "I'm glad I was able to recover like I did for round two with second and a Dash for Cash victory. It feels good to be right in the hunt now and I'm ready to make a run at this thing."

Winn, Michigan's Henry Wiles (Don's Kawasaki/Kawasaki) earned back-to-back sixth place finishes to begin the season in Daytona. Though his results were far from spectacular, Wiles can't be too bummed about starting off the season in the top-ten in points.

One of the biggest storylines and set of unfortunate circumstances that stemmed from last weekend's opening rounds at DAYTONA Flat Track was defending Grand National Champion Brad Baker and his inability to find the top-ten in either of the season's first two main events. Baker was disqualified after a Round 1 incident in the pits involving him and his team's misuse of his motorcycle in Thursday night's final. As if the DNF wasn't a bad enough beginning to the season for the current No. 1 plate holder, Baker then went on to finish 11th in Friday night's main event to set him all the way back to 16th in the overall championship points race. Following the conclusion of Round 2, it was safe to say the Dryad, Wash. product and defending title-holder couldn't get out of Daytona fast enough. However, Baker's nightmarish start to the 2014 season is realistically only a minor setback for him as there are still 14 rounds remaining, 12 of which he will compete aboard the heavily sought-after Factory Harley-Davidson XR750.

Next Up
The stars of AMA Pro Flat Track will head to Springfield, Ill. for the Springfield Mile at the Illinois State Fairgrounds on May 25, 2014.