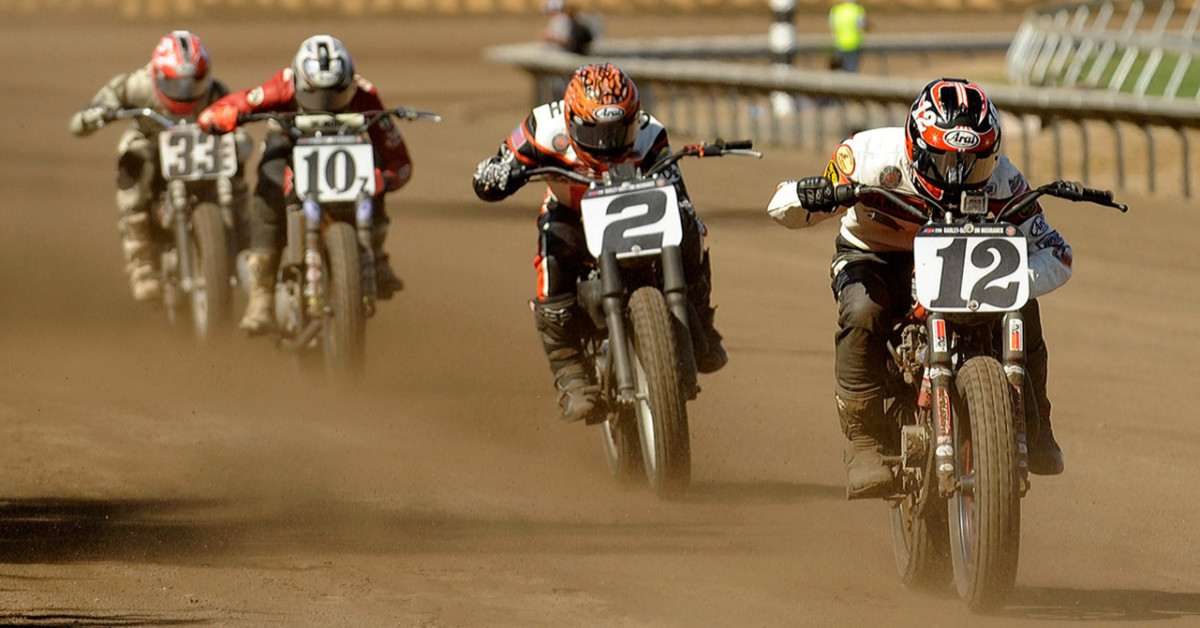 DAYTONA BEACH, Fla. (October 11, 2012) - It’s off to Pomona, Calif. for the final race of 2012 for the AMA Pro Harley-Davidson Insurance Grand National Championship presented by Motorcycle-Superstore.com and Lucas Oil. The series' top contenders will give it their all on the Pomona Half-Mile at LA County Fairplex this Saturday night, October 13th.

As has become the norm, the AMA Pro Harley-Davidson Insurance Grand National Championship and the Motorcycle-Superstore.com Pro Singles points races are coming down to the wire with three riders in the Expert class and two in the Pro Singles class capable of taking the titles.

The roar of the big twins on the cushion half-mile of the LA County Fairplex will settle the year long war and decide who will take home the $20,000 check from Harley-Davidson Insurance.

“I still have the points lead. I just have to bring it at Pomona,” said Mees. “I’m 12-points up and it only takes one to win it. Pomona hasn’t been the strongest race track for me but we’ll bring it.”

“I’m really looking forward to Pomona. 12 is going to be tough,” said Halbert. “No matter how bad Jared struggles at the beginning of the day he will be close at the end. I just have to go out there and dominate and get maximum points and see what happens.”

“I’m just going to go to Pomona and try to win. If we can’t win the championship I want to at least win a race this year,” said Johnson. “Hopefully Pomona is going to be good. Pomona was good for us last year. Hopefully we will go there and finish off the season on a good note.”

Of course the title contenders will not be the only riders on the track and everyone will be shooting to end 2012 with a win. Bryan Smith will be back aboard the potent Crosley Radio / Howerton Racing Kawasaki that powered him to wins at the Sacramento and Springfield Miles. It will be his first time to ride the bike on a half-mile.

Other than last year's winner Jake Johnson, Henry Wiles is the only current rider to have a win on the big cushion half-mile. The 2009 winner will be aboard the Foremost Insurance / Lloyd Brothers backed Ducati this year.

The young lions will also be looking to make their mark and Stevie Bonsey will be looking for two in a row aboard his Goodwin Racing backed Harley-Davidson. 2011 Saddlemen Rookie of the Year Brad Baker finished second last year and would like nothing more than to move up one spot on the box. “Pomona went great last year. I think I will go a little bit better on the Harley (Dodge Brothers Racing),” said Baker. “I was second last year on the Duck (Lloyd Brothers Ducati) and I’m feeling pretty good on the Harley. It’s just a really fun race track. I’m looking forward to it.”

Vanderkuur has posted wins on the miles of Indianapolis and Santa Rosa, but Shoemaker is still in search of his first win of 2012. Shoemaker has stayed in contention by qualifying for every Pro Singles main event this year. Only third places’ Jason Isennock (Highs Dairy) can equal that. A couple of DNFs have left Isennock 28 points off the lead with the maximum point payout of 24 available at Pomona. With strong showings last weekend from Shayna Texter (DFW / RLT Racing), Wyatt Maguire (Kirkland Racing / Pro 1 Racing Heads) and Rodney Spencer Jr. (831 Pinnit / GP SPorts), the class will be sure to impress.

The winner of the AMA Pro Motorcycle-Superstore.com Pro Singles title will pocket $10,000 with $5,000 going to second place.