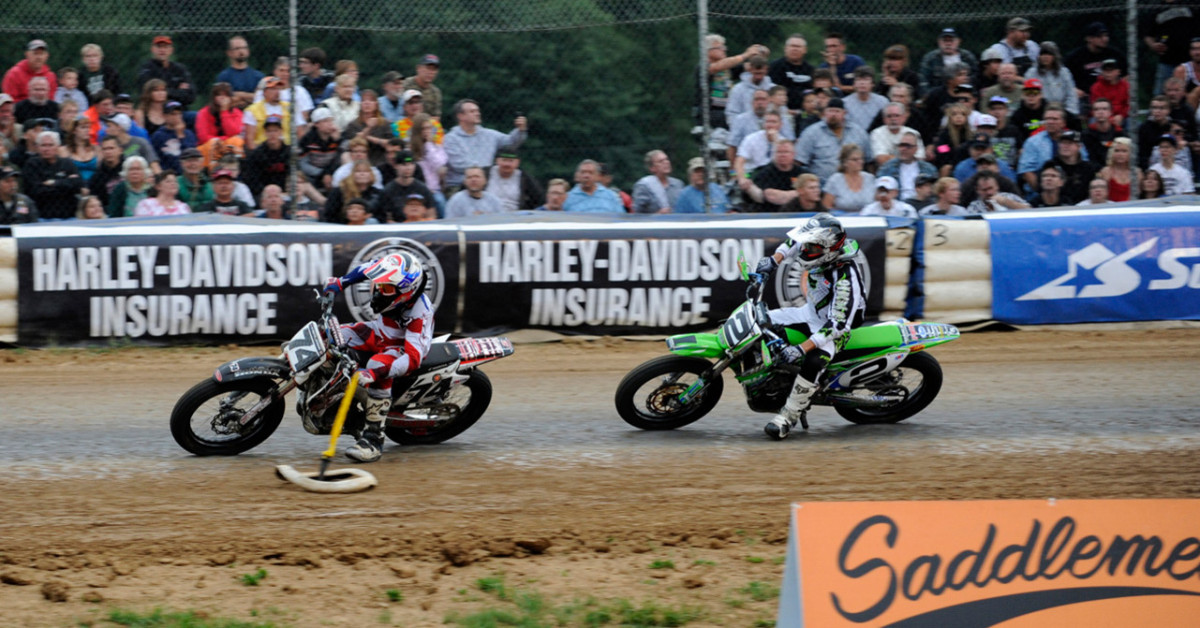 DAYTONA BEACH, Fla. (August 2, 2012) - The AMA Pro Harley-Davidson Insurance Grand National Championship presented by Motorcycle-Superstore.com and Lucas Oil makes its one trip to the Pacific Northwest on the first Saturday of August, before heading back to the Midwest for the second half of the 2012 schedule.

Mount Saint Helens Motorcycle Club will be hosting Round 8 of the 16 race season on their fabled TT track in scenic Castle Rock, Washington.

As the season reaches its midpoint, the points race in the AMA Pro Harley-Davidson Insurance Grand National Championship is shaping up to be a two rider race as Jared Mees (Rogers Racing / Montgomeryville Honda) and defending Harley-Davidson Insurance GNC Champion Jake Johnson (Zanotti Racing) methodically pull away. “We came from a long way at Sacramento to finish third I feel really confident,” said Mees. “I lost a little bit in the points, but we were 11 ahead going into Hagerstown, I won that and went to 15, now we are at 11 again. It’s just cat and mouse really.”

Hometown hero, Sammy Halbert (Fredericktown Yamaha) sits third in points thirty three points down to Mees. Halbert recorded his first Grand National victory on the tight, technical TT track in 2007 and backed that up when the series returned in 2011 with another win. No doubt Halbert hopes to make up significant ground.

Jared Mees has a third, fifth and second on his Castle Rock resume while defending Grand National Champion, Jake Johnson won the 2006 race, the only other Castle Rock National this century. Johnson has since posted sixth and seventh place finishes.
The Northwest flat track fans always look forward to the castle Rock TT as it allows many of their local heroes the chance to come home from the Grand National series and perform in front of friends and family.

Series regulars, the Halbert brothers, Sammy and Jethro and Brad Baker will be joined by none other than former Grand National Champion Joe Kopp, who is stepping out of his brief retirement to return to the track he cut his racing teeth on.

Kopp qualified for his first AMA Pro Flat Track Grand National Main Event at Castle Rock in 1993 and finished in fifth place. Kopp has made five Castle Rock GNC main events with a second in 1994 as his best finish. Look for Kopp to show the “youngsters” a thing or two on his Latus Motors Kawasaki.

Much like the Grand National Experts, there are several Motorcycle-Superstore.com Pro Singles riders who hail from the Northwest, but spend their summers chasing the national scene. Kirkland Racing teammates Wyatt Maguire and Hunter Taylor are currently seventh and 11th in the Motorcycle-Superstore.com Pro Singles point standings and they will be joined by many of their local rivals to take on the other series regulars.

Current points leader Gerit Callies (Fun Mart Cycle) currently holds an 11 point lead over Ryan Wells (Weirbach Racing), the 16 year old is riding his first year in the class. Callies has the advantage of having two years under his belt including the win of the 2011 Castle Rock TT Motorcycle-Superstore.com Pro Singles Main Event. Callies has three wins this year as he comes to grips with his 450 KTM.

Texter, the only female rider to win a Motorcycle-Superstore.com Pro Singles main event will be making her second appearance on the TT as she finished 11th in the 2011 race.

How to Catch the Action