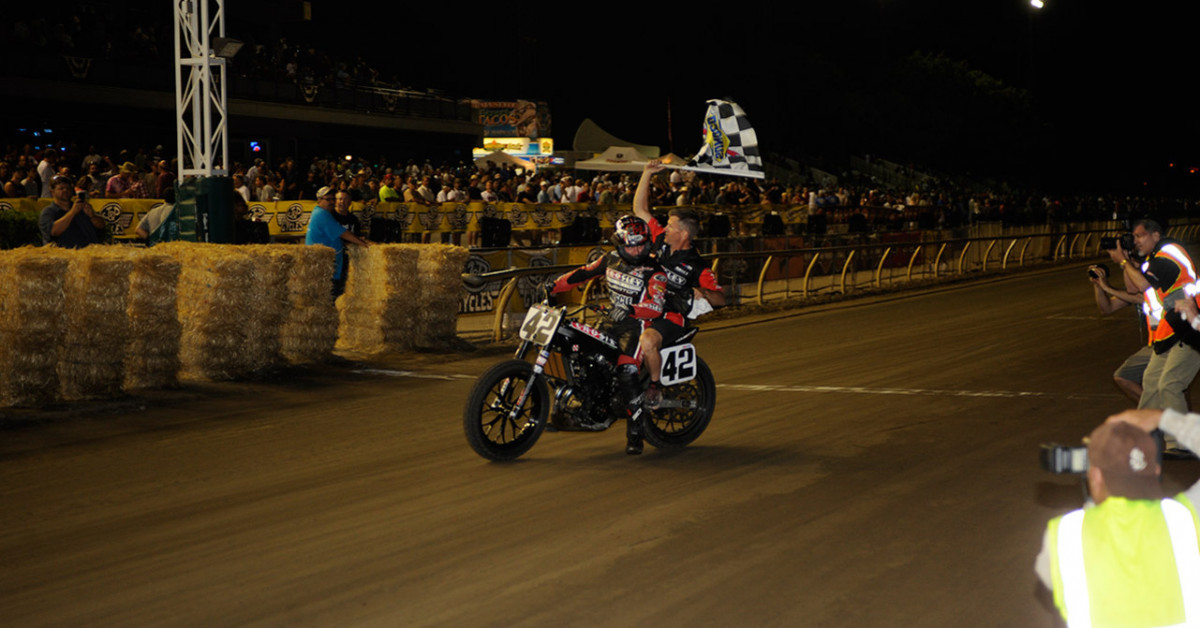 SACRAMENTO, Calif. (July 31, 2013) - Since the Sacramento Mile's return to AMA Pro Flat Track presented by J&P Cycles annual calendar in 2011, two things have remained consistent - the intensity that the Northern California crowd brings to every race and the pure domination of the mile-long track by Flint, Michigan's Bryan Smith (Crosley Radio/Kawasaki EX650) as he has claimed victory in each of the three races held at the Cal Expo.

"Everything went great for me all day," said Smith following his third consecutive Sacramento Mile main event victory. "I really wanted to get away from the pack and win this thing by a long way. I had it going my way early on but my tire got hot and I started to fade back and eventually got pushed off the groove and found myself in a battle. Baker and the rest of the guys really gave me a good run and I knew it would be hard getting around those Harley's but luckily my Crosley Kawasaki was good on the straightaways and I was able to get by them one final time."

In 2011, AMA Pro Flat Track presented by J&P Cycles returned to Sacramento after a 12-year absence from the venue. Before last weekend, Scott Parker, a nine-time Grand National Champion and AMA Pro Hall of Famer, was the only rider in the history of the sport to win three straight Grand National Expert main events at the Cal Expo in its long history with the series dating all the way back to 1959. Parker's string of three straight wins came between the years of 1996-1998 en route to a 94-win career.

Already one of the most prestigious events on the schedule for AMA Pro Flat Track presented by J&P Cycles every year, the stakes were higher on this go around as a number of flat track enthusiasts and industry supporters chipped in to offer an additional $13,500 in bonus payouts to the riders for their efforts, bringing the total to $67,000.

Though Smith is the reigning triple champ at the Sacramento Mile, those victories didn't come easy. In 2011 he won by a mere .042 seconds. Last year, No. 42 claimed victory by an even smaller margin at .037 seconds. This time around, Smith managed to cross the line .083 seconds over second-place finisher and defending Grand National Champion Jared Mees. Don't let the added breathing room for Smith fool you as the racing was as intense as ever all the way down to the final lap.

Smith got off to a fast start. He won his heat race and the Dash for Cash and the 30-year-old looked to be on his way to another victory after getting the holeshot off the pole in Saturday night's main event. Everything was going great for Smith until lap 14 when he slid off the groove on turn two and found himself in a dogfight the rest of the way to the checkered flag.

Once Smith slipped, it was like blood in the water for several of the premier riders of the sport as they all seemed to pounce on the opportunity and within less than a lap there were five riders under a second off the lead.

Eatonville, Washington's Brad Baker (Dodge Bros Racing/Harley-Davidson) was the first to capitalize on Smith's mistake as he quickly stole the lead but forfeited it almost immediately to Jared Mees (Rogers Racing/Harley-Davidson) on the very next lap. Mees went on to lead several laps but the distance separating the Honey Brook, Pennsylvania native and the rest of the pack was so slight that it hardly made a difference who was in first.

With the race hanging in the balance and Smith's impressive streak at Sacramento on the line, he slammed the throttle on the final back stretch just a little harder than his opponents and held on for the victory. The win was Smith's first of the year and propelled him into third in the overall Grand National Championship point standings.

There were four other riders who were all within less than a second of Smith as he crossed the finish line for the final time; Mees, Oxford, Pennsylvania's Brandon Robinson (TJ Burnett Farms/Kawasaki) who closed out the podium with a third-place finish, Brad Baker, and Graham, Washington's Sammy Halbert (Flat Tack Live/Harley-Davidson) who rounded out the top five, respectively.

As pressure packed as the Expert Twins race was to cap off a stellar night of racing, the AMA Pro J&P Cycles Pro Singles race set the tone with an even bigger nail biting finish. Shayna Texter (Crosley Radio/Honda) defended her 2012 Sacramento Mile victory with a win in dramatic fashion, taking her first 2013 win. The Willow Street, Pennsylvania native was neck-and-neck with Lodi, California's Nate Wait (Stockton Honda-Yamaha/Honda) for the majority of the race. Wait actually took the lead on a few occasions and looked as if he might pull off the upset. In the end, it was Texter who pushed back on turn four of the final lap to seal the victory and raise herself to fourth in the point standings.

"It was a great race," said Texter. "I was definitely forced to work a whole lot harder this year than I did last year that's for sure. Coming from behind is always tough but it was a good clean race and I'm just so happy right now. I have to thank the fans for supporting me, these west coast fans are one of a kind. I always have to thank my family back home on the east coast, I wouldn't be where I am today without them. I also have to thank my team and my sponsors for allowing me this opportunity."

The win marked Texter's second in as many years at the Sacramento Mile and her fifth career victory as a professional. Texter notched three wins in 2012 and looks poised to compete with even more impressive results this year.

Davison, Michigan's Stephen Vanderkuur (Parkinson Brothers Racing/Honda) put together his most impressive performance of the season, finishing third. Vanderkuur, the defending J&P Cycles Pro Singles champion has struggled at times in 2013 and hopes that his podium finish will be the boost he needs to get back to his championship-caliber self.

AMA Pro Racing, working in conjunction with Circle Bell Motorsports, live streamed a produced feed of the Sacramento Mile on AMA Pro Live (http://www.amaprolive.com/). An international audience logged on and enjoyed a four-hour broadcast of the night's racing activities, from opening ceremonies through the final checkered flag. Video On Demand (V.O.D.) streams of the night's racing activities can be purchased on the AMA Pro Flat Track presented by J&P Cycles channel on Ustream at www.ustream.tv/channel/ama-pro-flat-track.