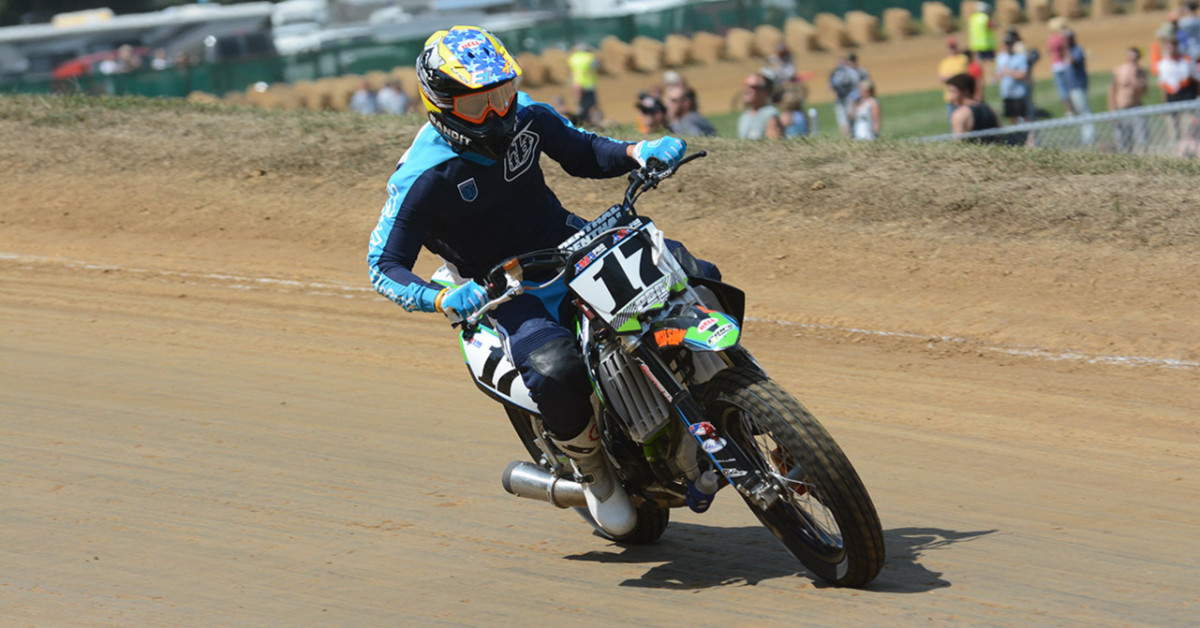 DAYTONA BEACH, Fla. (August 14, 2013) - Winn, Michigan’s Henry Wiles (Don’s Kawasaki/Honda) achieved the fastest qualifying time in Round 7 of AMA Pro Flat Track presented by J&P Cycles competition last Sunday and looked to be on his way to another flawless weekend of supremacy at PMC Race Park in Peoria, Ill. for the 2013 running of the historic Peoria TT.

Then there it was; the epic downfall and the broken streak of eight consecutive Peoria TT wins right before our very eyes. During Heat 1, after blowing away the competition for the first nine laps, Wiles suffered a freak bike malfunction that led to him coming up lame and unable to finish the heat. Wiles would then be forced to compete in a semifinal in order to even be eligible for the main event - a race that typically has a microscopic percentage of producing the night’s eventual main event victor.

Even with Wiles’ convincing victory in the qualifier, he found himself on the third row and in thirteenth position on the starting grid of Sunday’s main event - a position he had not been familiar with over the last eight years he’s managed to land atop the podium.

By lap six, any cynical assumptions made of Wiles and his chances of making it nine straight Peoria TT victories had diminished as he had already made up 10 positions in the running order. By lap eight, the original doubters were now probably feeling quite ashamed of themselves as Wiles climbed another position all the way up to the two spot and it was inevitable that Eatonville, Washington’s Brad Baker’s (Specialty Fabrication Incorporation/KTM) short-lived lead was exactly that; short-lived.

On the very next lap, Wiles did the only thing he knows how to do at PMC Race Park, take the lead and run with it. Wiles would go on to extend his lead with every lap that passed and eventually win his ninth straight Peoria TT by 3.317 seconds over Baker. Wiles’ streak of nine straight main event victories at the historic venue is one of the most impressive streaks in the history of the sport and though it appeared to be in jeopardy last Sunday; it never really was and it doesn’t look to be in any kind of peril for years to come. The way Wiles glides around the .45-mile track almost looks unfair to his competitors as he seems so comfortable with the layout.

As for the rest of the field, Baker remained the most consistent rider on the circuit with his second place effort. Philpot, Kentucky’s JD Beach (Burnett Farms Racing/Honda), a name that one would usually see on a GEICO Motorcycle AMA Pro Road Racing stat sheet, made his second start on dirt in 2013 and went on to close out the podium with a solid third place finish. Westville, Illinois product Shaun Russell impressed in his 2013 AMA Pro Flat Track presented by J&P Cycles debut with a fourth place effort and Salinas, California’s Briar Bauman (Rod Lake Racing/Honda) rounded out the top five.

Coatesville, Pennsylvania’s Jake Johnson (Parkinson Bros Racing/Honda) had a mediocre performance in his second race since departing from Zanotti Racing. Johnson will be fielded by Lloyd Brothers Motorsports for the remainder of the season, the same team that will field Henry Wiles.

Graham, Washington’s Sammy Halbert (Fredericktown Yamaha/Yamaha) went down hard in the evening’s first semifinal which led to him being unable to perform for the remainder of the event. It was just the first lap of the semi when Halbert landed awkwardly on the jump and crashed, forcing a staggered restart that he was unable to attend.

Henry Wiles may have built on his already astonishing streak of wins at Peoria, but when he passed Baker on lap nine, there was more at stake than just a main event victory. Not that Baker had any reason to let up on the gas once Wiles passed him and was surely on his way to another win, having the Grand National Expert Singles Championship on the line was more incentive than Baker needed to keep the throttle full bore and finish in the best position possible.

It turns out that Baker’s second place effort was critical for him as he edged out Wiles by a mere two points in the Grand National Expert Singles standings to claim the coveted title. Baker has exploded onto the scene in 2013 and doesn’t look to be slowing down anytime soon as the 20-year-old has become a force on the AMA Pro circuit. This surely won’t be Baker’s last prestigious award as he currently is running away with the overall Grand National Expert championship chase as well.

Baker started off the year hot in Grand National Expert Singles competition, finishing second in both Daytona races in rounds one and two. Baker’s third opportunity to compete on his 450cc motorcycle came on August 3 at the Castle Rock TT, where he would go on to finish fifth. Baker’s second place finish at the Peoria TT last weekend put a stamp on what was an outstanding season in Grand National
Expert Singles competition.

While almost nothing in the world of sports can top Henry Wiles’ extraordinary streak of nine consecutive wins at one specific racetrack, San Martin, California’s Rodney Spencer Jr.’s first career AMA Pro J&P Cycles Pro Singles victory was a big step for the 26-year-old. Spencer, starting from fourth on the grid, was able to find his way to the finish line first against some very prominent up and coming young riders.

Other than Spencer’s eye-opening victory, the second-most intriguing headline in the AMA Pro J&P Cycles Pro Singles main event was the resilience of Warrington, Pennsylvania’s Dan Bromley (Bromley Brothers/KTM). Bromley earned the holeshot early on and held the lead for a little while until he went over the jump on lap four and came down wrong, crashing and falling to his knees, leaving his status of even finishing the main event in serious jeopardy.

Bromley would return however, and begin a staggered restart in dead last. This didn’t affect him though, as he strategically knifed his way through traffic and eventually found himself in a battle for the lead once again. With nothing to lose, Bromley rode one of the only KTM’s in the Honda-dominated field to a surprising second place finish in the main event.

Davison, Michigan product and Defending AMA Pro J&P Cycles Pro Singles Champion Stephen Vanderkuur (Parkinson Brothers Racing/Honda) looked as if he would carry the momentum he’d gained over the last two events over to Peoria as he maintained a solid position heading into the main event’s final laps. Vanderkuur made a costly mistake, however, with three laps to go, and fell back to 11th place. The reigning champ would go on to move up three spots by race’s end to finish 8th but it certainly can’t be the type of end result he’d been hoping for.

Justin Jones (RFL Racing/Honda) rounded out the podium with a strong third-place effort as he finished just over a half second behind Bromley. Snohomish, Washington’s Jacob Lehmann (Vince & Denise Holt/Honda) and Bonney Lake, Washginton’s Hunter Taylor (Hunter MFG/Honda) went on to round out the top five, respectively.

AMA Pro Flat Track presented by J&P Cycles heads to the Indiana State Fairgrounds in Indianapolis, Ind. for Round 8. For tickets and information regarding the Indy Mile, please visit http://www.familyevents.com/event/264.