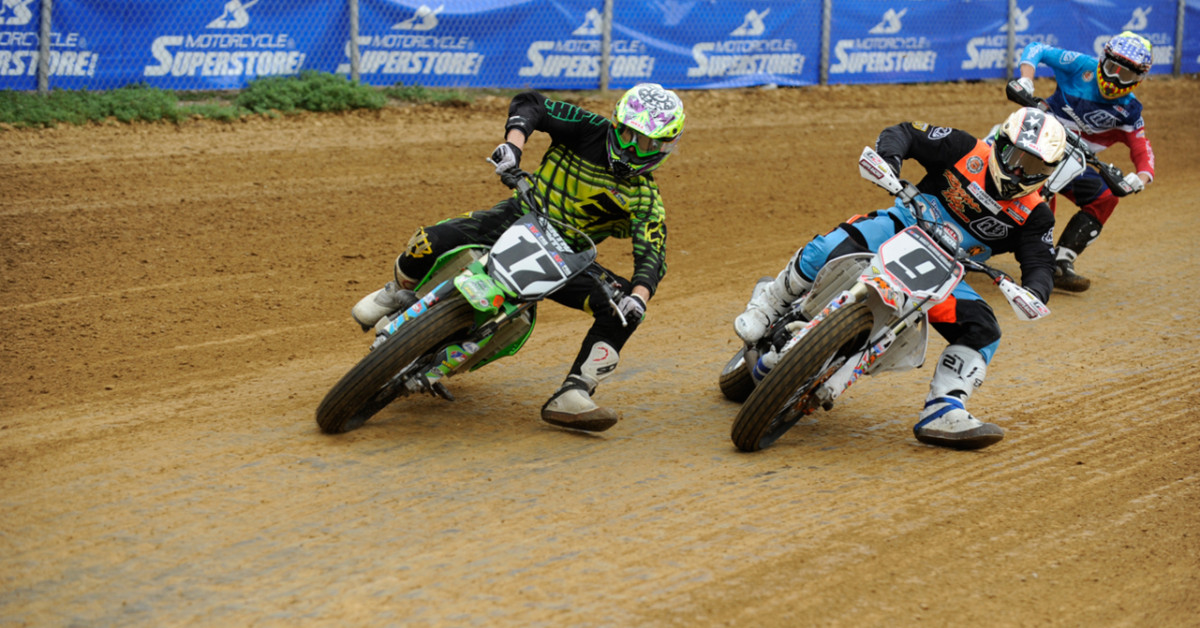 DAYTONA BEACH, Fla. (August 14, 2012) - The second half of the 2012 AMA Pro Harley-Davidson Insurance Grand National Championship presented by Motorcycle-Superstore.com and Lucas Oil started with a bang as the series returned to the oldest venue on the circuit. Peoria, IL and the Peoria Motorcycle Club's Race Park TT served as round nine of the 16 race series.

Many felt Wiles' winning streak was in jeopardy as he has struggled of late with his potent Kawasaki, but mild-mannered Henry stepped out of the phone booth with his cape firmly attached.

"Everybody was getting nervous. People around me that I talk to sometimes on a weekly basis, I could tell they were nervous," said Wiles. "I said it will be ok, we will be up front. It's tough on a guy sometimes when you are not getting the finishes you know you can, but you are fighting something. We struggled with the bike setup and some mechanical problems, but I tell you, I wasn't frustrated. I know that some things are going to be harder than others."

Wiles win matches Chris Carr's Peoria record of eight consecutive wins. "A lot of people would think eight in a row is enough, but I don't, nine would be nice," warned Wiles. "I tell you what, it's a special thing to be able to come in here and tie Chris' eight. I don't think Chris gets enough credit for winning 13 races here. When you stop and look back, that's a lot of years. A lot of things happen in that amount of time."

"Guys were running good today. I knew the field would be tough," said Wiles. "I qualified fast. I had fast heat race and didn't do so well in the Dash."

Even though Wiles had been fast qualifier and fast heat winner, Sammy Halbert (Fredericktown Yamaha) got the hole-shot in the Dash for Cash and came away with the win. Wiles even had second place slip away as Mees slipped by on the last lap. Halbert's four lap Dash for Cash performance foretold his national problems as each trip over the big jump was an adventure.

"My feet were coming off the pegs and everything," said Halbert.
"I'm sure the guys behind were waiting for something bad to happen. I definitely had a lot of moments over the jump today. I was just really struggling to figure out how to jump. I've got the speed to run here, I just don't have the jump figured out."

Wiles got the lead on what would be an aborted start as Luke Gough (Nicely Motorsports / Skip Eaken Racing) fell heavily coming off the jump on lap one. Gough was unable to make the restart and was transported to a local hospital with a reported leg injury.

When the light flashed green for the 25-lap main event, Wiles shot to the front and it became a race for second.

"Just like last year, I just struggled on the starting line. Wiles popped me right off the line," said Mees. "He did exactly what he had to do. Sammy got in between us and kind of road blocked us a little bit. It is what it is. One of these days maybe I can get off with him and give him a run. We always come here in June and have a lot of dominance, then he puts it on us in the main event."

Mees took over second on lap four when Halbert had another "jump" moment. "I was able to sneak up into second there on the start but got squirrelly on the jump and the exhaust pipe broke at the midsection," said Halbert. "I kind of looked down, I wanted to make sure that it wasn't dragging on the ground before I went over the jump again. With looking around and checking on what the deal was I lost a little time. Jared and Jake got by me."

"It seemed like it was going to get exciting for a minute. About halfway through it seemed like I kind of had a line," said Johnson. "I started catching Jared a little bit, I thought it was going to be a little bit of a race to the end. I came over the jump one lap and blew the rubber off my foot peg. That kind of screwed me up a little bit. Over the jump and through the right hander seemed like where I was making up some time. That was my strong point there and once I lost the foot peg it was done. I just tried to maintain. Jared started inching away from me. With about six or seven laps to go I saw that he was having some problems. I guess he blew his foot peg completely off. I started catching him a little bit, but he had such a big lead on me at that point that it was too late."

"With six or seven laps to go, I broke my foot peg clean off. I didn't have rubber or nothing," said Mees. "That there will put you in a training program quick. Holding that leg up with that big steel shoe and boot, it's heavy. There was no catching Henry with one or two foot pegs."

After a slow start USC Kawasaki / Red Bull backed JD Beach worked his way up to a distant fourth.

"I was really lucky we had that restart because I blew the first turn. I went way out and got passed by a bunch of guys," said Beach. "I knew I needed to get a better start and get down because everyone was running wide in the first turn. I was starting on the outside and so I knew what I needed to do. I got going pretty good and kind of got into a battle during the whole race and once I was able to get by the guys, I was able to break away a little bit, but we only had two laps to go. I think if I could have gotten a little bit better start, I might have been able to run for the podium. We were struggling coming out of turn four. Here that it one place that you have to get a really good run and pass them into turn one. We just weren't getting that drive."

"I definitely lost some horsepower. I was just trying to hang on to fourth," said Halbert. "I almost did, but JD slipped by me. Jumping is the area that we are lacking. Hopefully we will get some time to work on that eventually and come back stronger next year."

Wiles' day was not without stress including a major moment late in the race.

"I'm just proud of my team and my sponsors and my mechanic, Johnny (Olmstead). We had some problems in that Dash, but we made some changes to the bike," said Wiles. "I knew when I did the warm up lap that the bike was better. It was a relief. I said, 'Yes, this is going to make my life a little bit easier today.' On about lap 17 or 18 going into turn one I set my foot down, it all happened at just the wrong time. It was just all wrong timing, but I stuck my foot right in a hole, which is something that can happen and I've done it here before. The ground was really hard today. I was tapping it a little bit coming to the jump, I thought I stinking broke it. I knew that I would still be able to win the race if it was broke. I was on a mission today."

The AMA Pro Harley-Davidson Insurance Grand National Championship points chase is still controlled by Mees as he slowly pulls away. "We will take the benefits today," said Mees. "The highlights are putting some points on my two toughest competitors. We will just keep rolling forward."

Johnson is now 20 points down. "We are going to have to start stepping it up a little bit and start winning some races. Second and thirds are obviously not cutting it," said the defending Champion. "We are getting to the point of the season where over the past couple years it has been my strong point. Hopefully we can keep that rolling. I was looking at the points from last year and this year and I think we are basically right on the same deal. At Peoria last year, I was 19 or 20 points down, today I am 20 points down. We definitely have some work to do, but hopefully we are right on schedule."

Halbert is nine additional points back in third.