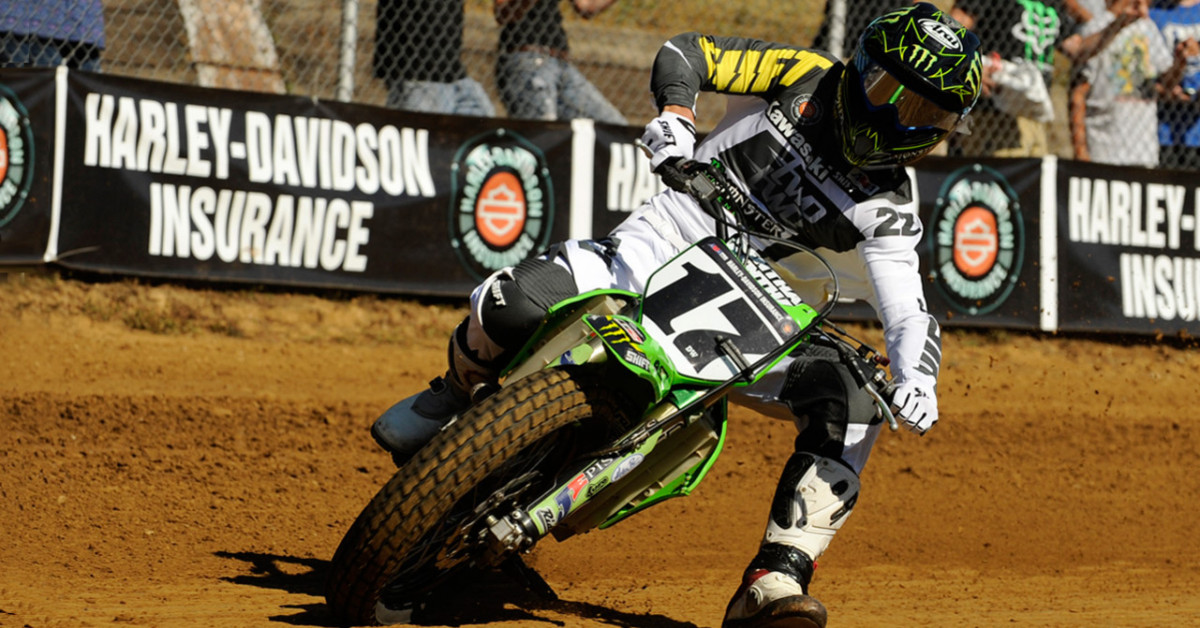 DAYTONA BEACH, Fla. (August 8, 2012) - Following a quick swing up the west coast, the AMA Pro Harley-Davidson Insurance Grand National Championship presented by Motorcycle-Superstore.com and Lucas Oil stars head into the second half of the 2012 season. The return to the Midwest and the venerable Peoria TT mark race nine of the 16 race series.

The Peoria Motorcycle Club has hosted Grand National motorcycle races on their club grounds, PMC Race Park, since 1947. For the first time in many years there is only one active rider to have tasted victory in Thunder Valley. Henry Wiles (Don's Kawasaki).

Even though Wiles has struggled this year, he did post a solid win at the Springfield TT on Memorial Day Weekend. Wiles has won the Peoria TT race seven consecutive years, with only a rain out in 2007 breaking his momentum. Even with his seven wins, Wiles is well off Chris Carr's impressive total of 13 wins.

The top performers in the AMA Pro Harley-Davidson Insurance Grand National Championship points standings have all had their fair share of success at Peoria too, and with Wiles' seemingly off his game, they smell blood in the water.

Current points leader Jared Mees (Rogers Racing / Montgomeryville Honda) has finished second to Wiles the last two years. Having dominated in Peoria at the spring non-national race, he is primed to win his first AMA Pro Harley-Davidson Insurance Expert Peoria TT. Last week's Castle Rock TT went well, but he fell just short of a win. "After fast qualifying and winning my heat, I was really looking forward to winning Castle Rock," said Mees. "We will take second and move onto Peoria. I'm really looking forward to Peoria; there is a guy I really want to beat there."

Castle Rock TT winner Sammy Halbert (Fredericktown Yamaha) has had his share of success at Peoria finishing third to Wiles and Mees the last two years. Halbert has had to come from behind both years and no doubt better starts may be the key to better results for the rider sitting third in points.

Defending AMA Pro Harley-Davidson Insurance Grand National Champion Jake Johnson (Zanotti Racing) had his best Peoria result in 2008 when he finished second to Wiles, but he is also coming off a good third place finish last week and is sitting second in the points. The ever consistent Johnson is looking for his third consecutive Grand National Championship. "We are all on our game right now. We are going to have to sit around and wait for somebody to make a mistake," said Johnson. "I was hoping it would get a little bit easier, but it's not looking that way. I look at the year I've had and I haven't won any races. Since Daytona I haven't been off the podium. With six straight races on the podium and I'm still in second place. It's tough. It will be about who can prevent any damage along the way. I'll have to stay consistent."

The veterans are not the only players in the sand box though. The pre-entry list is full of young and old challengers alike. Top performer in the 2012 Saddlemen Rookie of the Year chase, Briar Bauman (Rod Lake Racing / USC Kawasaki) and his teammate JD Beach (USC Kawasaki / Red Bull) both showed promise in the Pro Singles race with Beach winning in 2009 and 2010. Bauman won last year on the track only to have contaminated fuel ruin his day.

Past AMA Pro Motorcycle-Superstore.com Pro Singles Champions Brad Baker (The Brothers Powersports) and Jeffrey Carver (Carver's BBQ) are both solid TT riders and are having very good results this year. Daytona winner Matt Weidman is still working his way back after his Lima injuries, but feels up to the grueling 25 lap Peoria TT.

Adam Bushman has not fared well in August at Peoria recording two 14th place finishes and one hospital ride, but a dominating spring non-national win in June has left the Midwest CNC / Power Bar backed rider looking forward to the 2012 edition of Peoria.