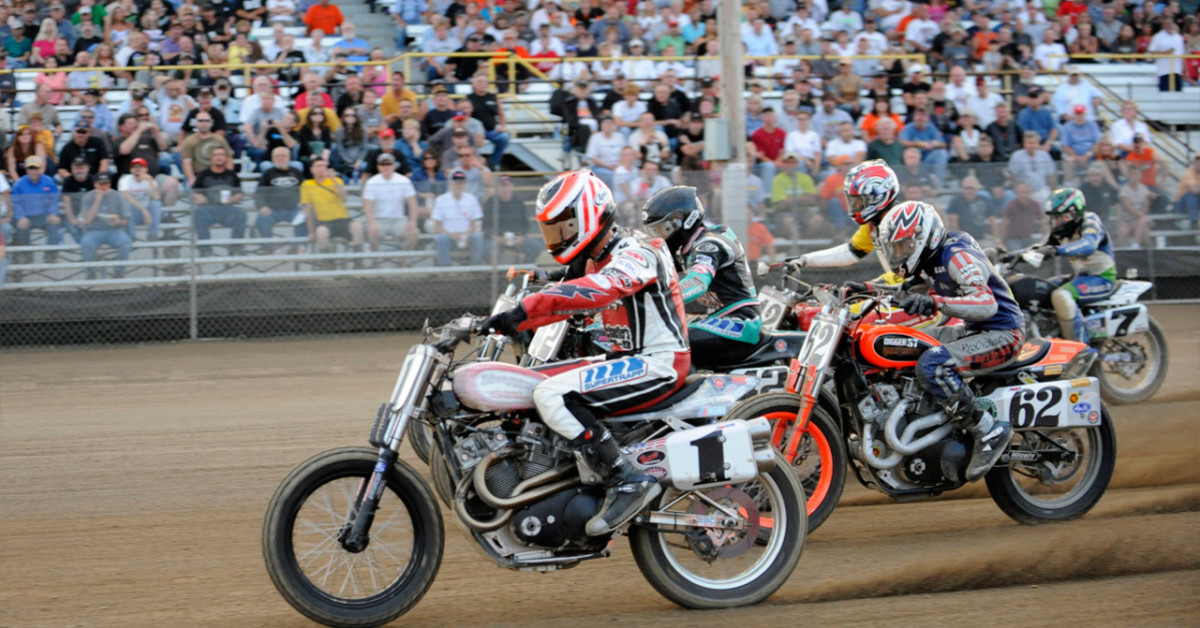 DAYTONA, BEACH, Fla. (June 25, 2012) - The arrival of summer and the last Saturday of June traditionally mean the AMA Pro Harley-Davidson Insurance Grand National Championship presented by Motorcycle-Superstore.com and Lucas Oil will be at the Allen County Fairgrounds in Lima, Ohio.

The 2012 season has yet to see a repeat winner in the Harley-Davidson Insurance Grand National Championship. Current Grand National Championship points leader Jared Mees (Rogers Racing) has yet to post a victory in 2012, but is the only active racer with more than one win at Lima. Mees captured the first of his eleven GNC victories in 2005, then backed it up with another in 2007.

Mees' consistency has rewarded him with a fourteen point lead over a log jam for second. Matt Weidman (Greg Crow Racing) is second in points and looking to be the first rider to notch their second win of the year. Weidman took his first career win at Daytona in March and his Lima history is promising. The last three years have seen the young New Yorker finish fourth, third and second. Obviously, this leaves only one place left to go.

Last year's winner, Sammy Halbert (Southeast Harley-Davidson) is coming off a disastrous Memorial Day Weekend that saw his title chase take a hard hit when a turn one crash on the Springfield Mile resulted in an 18th place finish and only one point. A shoulder injury has kept him on the sidelines for a month, but the defending Lima winner is looking to make a big comeback.

Henry Wiles (Lloyd Brothers Motorsports) posted a win at the Springfield TT and is also looking for his second Lima win, following his 2010 victory. In 2008 Wiles was aboard the Lloyd Brothers' Aprilia and came up just inches short, but returned on an Eddie Adkins Harley-Davidson to win in 2010. This year he will be back with the Lloyd Brothers on a Ducati and could very well become the first rider to win Lima on anything other than an XR-750 Harley-Davidson.

2009 winner Bryan Smith will be getting off the potent Kawasaki he rode in Springfield to ride the more "limestone" friendly Moroney's Harley-Davidson mount. The hard luck rider has posted top-five finishes every year since 2006.

Defending AMA Pro Harley-Davidson Insurance Grand National Champion Jake Johnson (Zanotti Racing/Schaeffer's H-D) has yet to break through at Lima with a fourth place finish in his first race at Lima in 2002 being his best finish. Kenny Coolbeth (Harley-Davidson Motor Company) has fared a little better posting second and third place finishes in 2007 & 2005.

Lima has contributed several first time winners as Will Davis, Dominic Beaulac, Chris Evans and Jared Mees all scored their first wins on the challenging oval, a young hoard of racers are looking to add to the list. Young guns that are in the top-15 in points, but in search of their first big win are Brad Baker (Big Ed Beckley / Tolbert Racing), Briar Bauman (USC Kawasaki), Jethro Halbert (Goodwin Racing), Jeffery Carver (Kiesow Racing) and Brandon Robinson (Werner-Springsteen Kawasaki).

The AMA Pro Motorcycle-Superstore.com Pro Singles class is just as much up for grabs. It has been "win or nothing" for current points leader Gerit Callies (Fun Mart Cycles) has won two of the four main events (Daytona and Springfield TT), but didn't even qualify for the other two. Springfield Mile winner, Jake Cunningham (Schillers' Tree Service) holds second in points while the other Daytona winner Ryan Wells (Weirbach Racing) holds third.