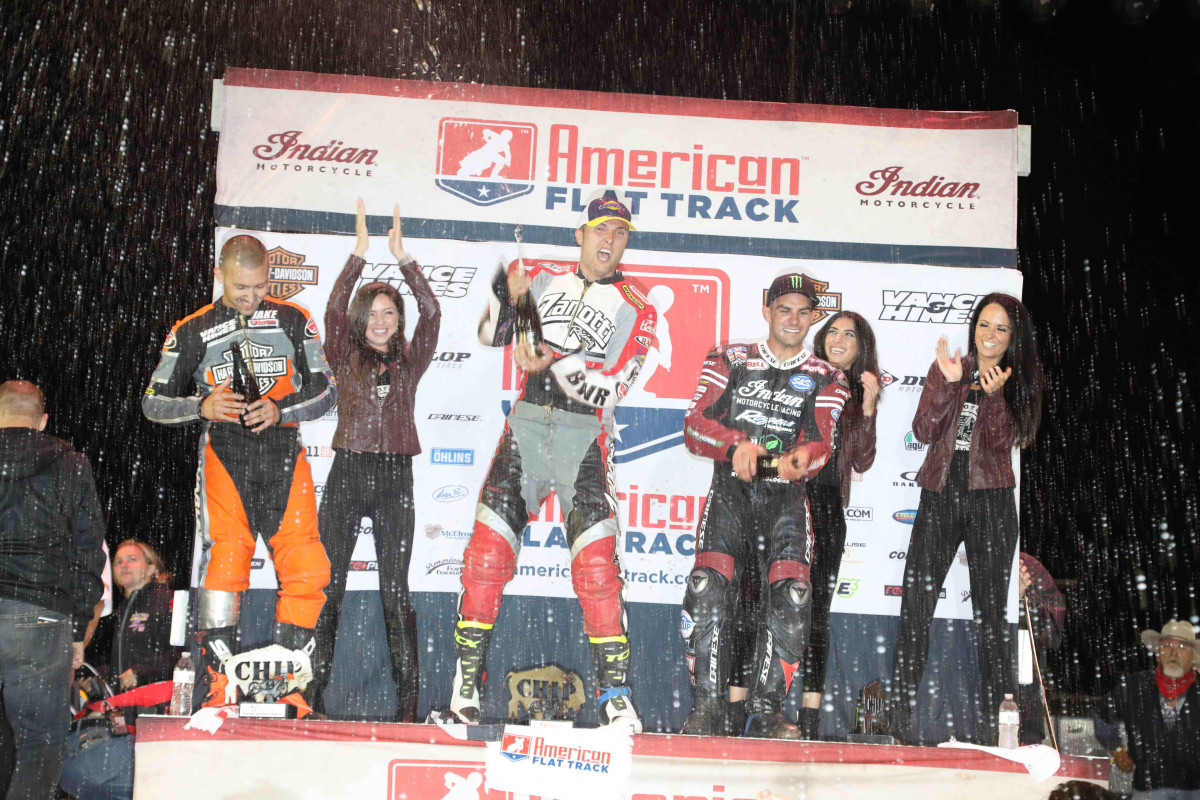 DAYTONA BEACH, Fla. (August 2, 2018) – In 2017, the inaugural Buffalo Chip TT blew fans’ minds – more than 10,000 of them. You had an honest-to-goodness American Flat Track national held on a built-overnight TT track snaking around the legendary Buffalo Chip amphitheater – which became the opening act for a packed-house rock concert in that same venue later that night.

It was a fusion of motorsports and music on one of the most legendary of all stages…and it became an instant classic.

This year, the Buffalo Chip TT presented by Indian Motorcycle promises all of that and more. You’ll have the Chip’s wild racetrack running below the venue’s two-story party-deck roadhouse and directly in front of the concert stage. You’ll have the world’s best flat track racers sliding, spewing dirt and launching off the Chip’s massive jump. And you’ll have thousands of fans riveted to the action – and being loud about it – as they warm up for a concert featuring mega-popular British Columbia-based rock band Theory of a Deadman an hour after the last checkered flag flies. What’s not to love? 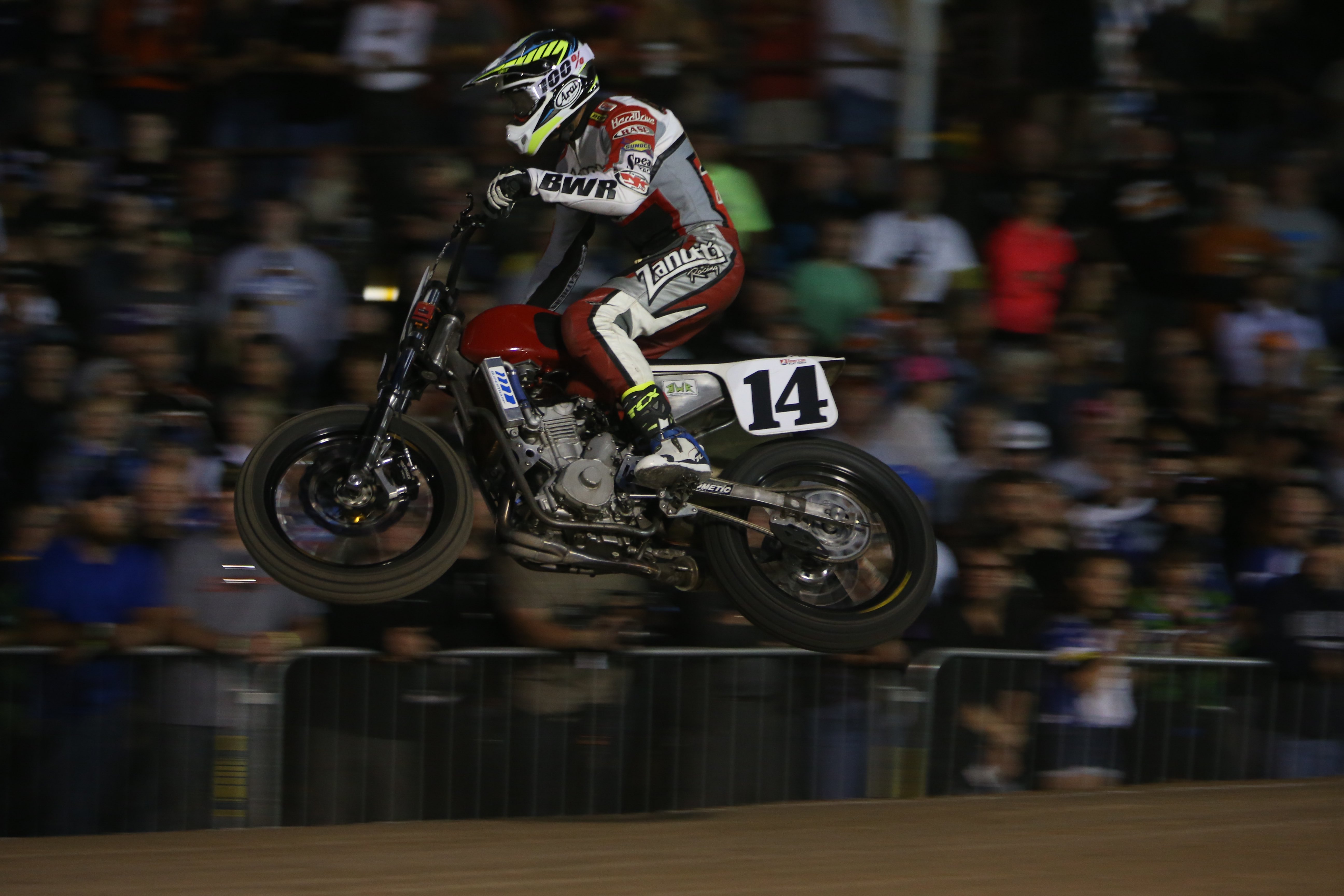 Last year it was Kawasaki-mounted Briar Bauman (No. 14 Zanotti Racing Roof Systems of Dallas/Western Powersports); grabbing the AFT Twins presented by Vance & Hines win after a truly crazy race that featured all sorts of drama – red flags, busted engines and factory star Sammy Halbert pushing his bike heroically across the finish line. In AFT Singles, roadracer-turned-flat-tracker Hayden Gillim (Indian Motorcycle/Cycle World/S&S Cycle Scout FTR750) put on a show, winning in spectacular fashion. Gillim, by the way, will ride an Indian Scout FTR750 - and pit with the factory Indian team - for this year's Chip. 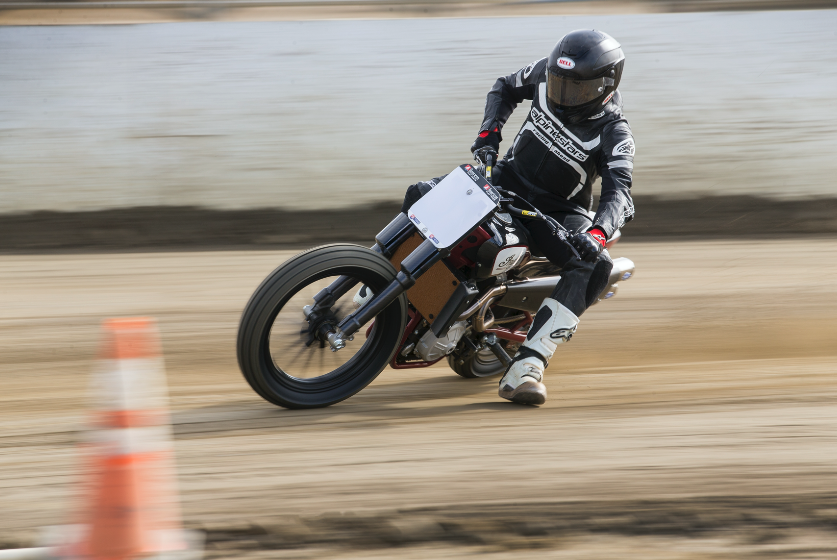 With all that as a backdrop, the big questions are these: Can TT phenom Gillim hang with guys like the Bauman or TT legend Henry Wiles (No. 17 Bandit Industries/Wilco Racing/Willing Built Kawasaki Ninja 650) on the bigger and faster twin-cylinder bikes? Can Jeffrey Carver Jr. (No. 23 Roof Systems of Dallas/Indian of Metro Milwaukee Scout FTR750), the only man to beat Jared Mees (No. 1 Indian Motorcycle/Rogers Racing/SDI Scout FTR750) in a straight-up fight this season, run up front? Can Bronson Bauman (No. 37 Indian Motorcycle Racing backed by Allstate Scout FTR750), who’s riding the factory Indian of Bryan Smith in a one-race deal (Smith won’t ride the Chip due to his still-tender injured leg) be a contender? Or will AFT Twins points leader Mees continue to steamroll the competition as he has for much of the 2018 season? 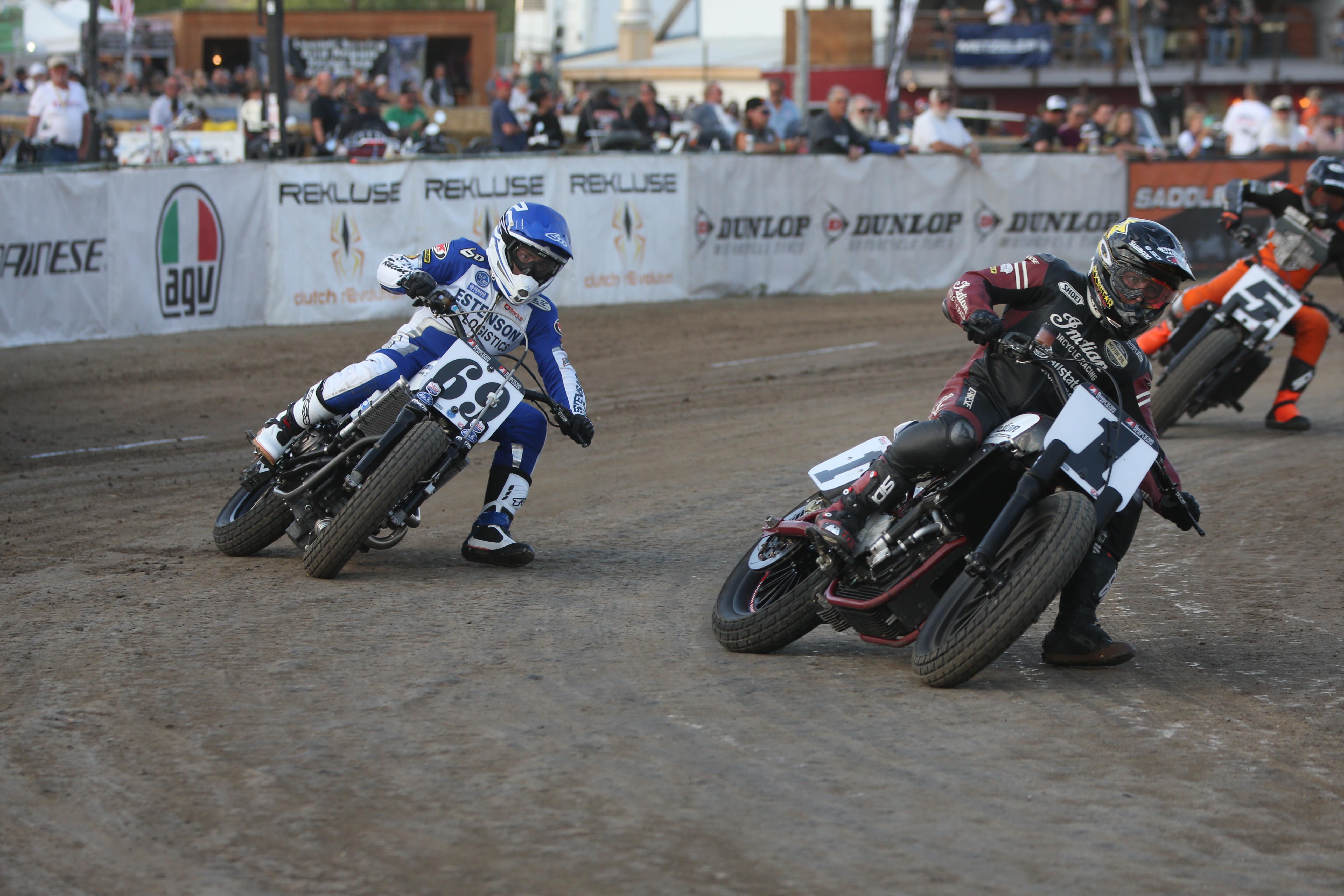 What of the AFT Singles division, where there have been eight winners in 11 races? One of those is points leader Dan Bromley (No. 62 KTM North America/Bromley Motorsports 450 SX-F), who’s won both TTs so far this season. Another is Ryan Wells (No. 94 RMR/Al Lamb’s Dallas Honda CRF450), second in points and always tough. And then there’s 2017 Black Hills Half-Mile winner Brandon Price (No. 92 Parkinson Brothers Racing/DPC Racing Honda CRF450R), who’ll make his return to AFT competition at the Chip. This is anybody’s race.

Of course, there’s nonstop and outlandish fun to be had during the Buffalo Chip’s 10-day celebration of motorcycle culture, music and Americana. Aside from the Theory of a Deadman show, Foreigner will reunite with its original band members on Saturday night, while Lynyrd Skynyrd plays the evening after the TT as part of its farewell tour. Then there’s the axe throwing, midget bowling, zip-lining, rope swing contests, demo rides, stunt shows, beauty contests, pancake breakfasts, bike shows and more that make the Buffalo Chip experience during the Sturgis Rally so memorable. 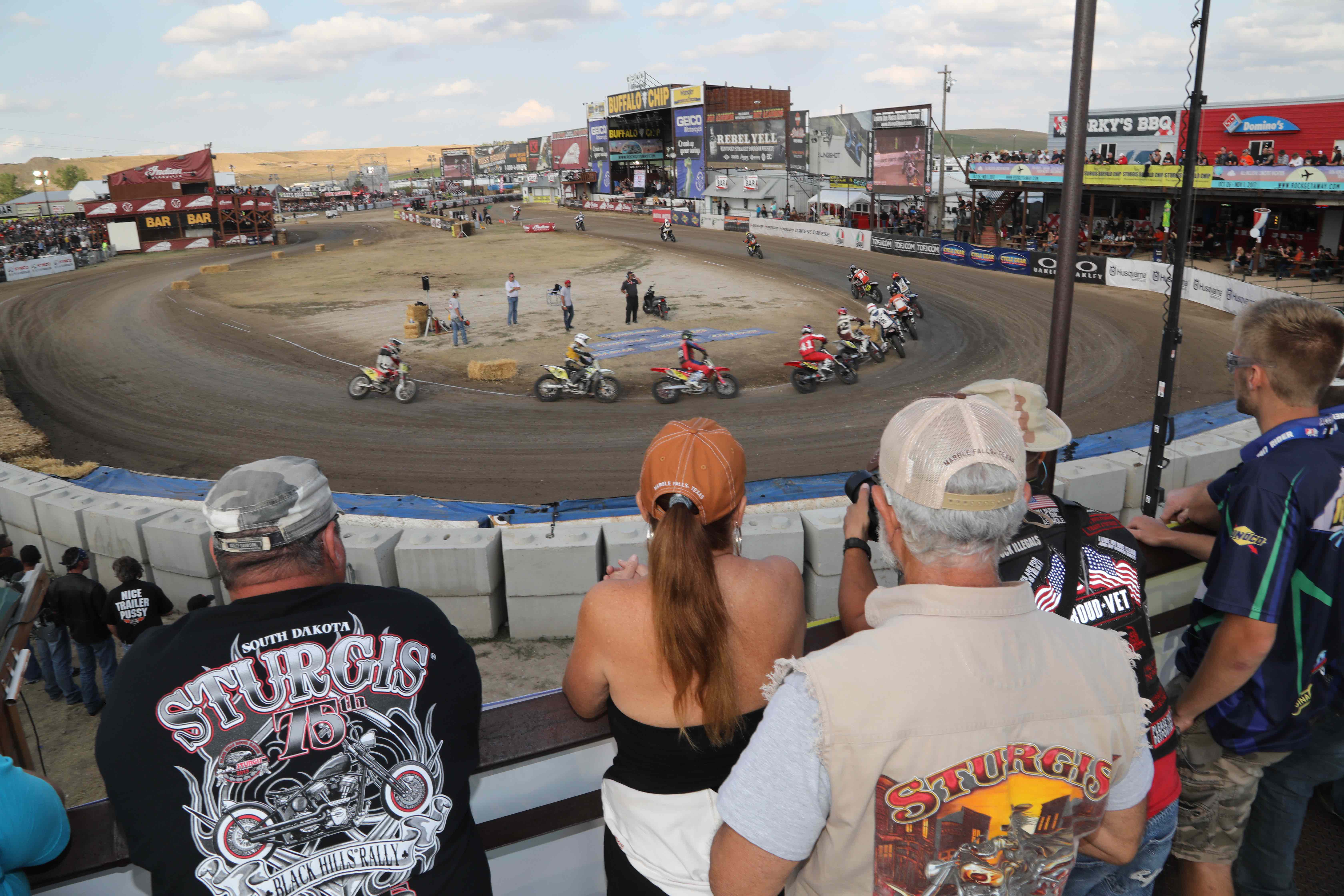 In all of racing there's really nothing like the Buffalo Chip TT.

Amplifying the racing action during the Sturgis Rally is the Harley-Davidson Black Hills Half-Mile presented by Law Tigers Motorcycle Lawyers on Tuesday, just two days after the Buffalo Chip TT. Black Hills Speedway is known as the ‘fastest Half-Mile in the country,’ so fans are encouraged to grab tickets early and save $10 in the process. Additional information for the Black Hills Half-Mile will be issued later this week, so stay tuned.

Tickets for both the Buffalo Chip TT (Aug. 5) and Black Hills Half-Mile (Aug. 7) are available now at the following links:

Gates open at 2:00 pm MT (4:00 pm ET), with practice beginning at at the same time. Racing is scheduled to start at 6:00 pm MT, just after the 4:30 pm MT Fan Walk/Autograph Session and 5:30 pm MT Opening Ceremonies. Main events are scheduled to begin at 7:25 pm MT, with racing concluding at approximately 9:00pm MT as preparations are made for the Theory of a Deadman concert that kicks off at 10:30 pm MT.

Catch all the AFT live streaming action on FansChoice.tv at https://www.fanschoice.tv/watch-live/american-flat-track.

For a thoroughly in-depth experience with flag-to-flag coverage of both Main Events enhanced by drone and onboard footage, be sure to catch the feature telecast of the Buffalo Chip TT presented by Indian Motorcycle when it premieres on Saturday, August 11 at 8:30 pm ET (5:30 pm PT). Be sure to check your local listings, or for the complete broadcast schedule for AFT on NBCSN, please visit  http://www.americanflattrack.com/events-nbcsn﻿

About the Sturgis Buffalo Chip

The Sturgis Buffalo Chip® is the Largest Music Festival in Motorcycling®. It is the world’s first and leading entertainment destination for the motorcycle enthusiast and South Dakota Excellence in Tourism Innovation award winner. Since 1981, the venue’s high-profile, nine-day festival, known as The Best Party Anywhere®, remains one of the world’s most televised and longest running independent music festivals. Located three miles east of Sturgis, SD on 600 creek-fed acres, it offers six stages of entertainment, a swimming hole, bars, mouth-watering food, showers, cabins, RVs, camping and more to visitors traveling from all corners of the world. The Chip's concerts and races are free with camping. The 2018 Motorcycles as Art exhibit, “Passion Built – Garage to Gallery” curated by Michael Lichter, numerous bike and stunt shows and all shopping, live music and events at the CrossRoads are free and open to the public. More details are available at www.BuffaloChip.com.