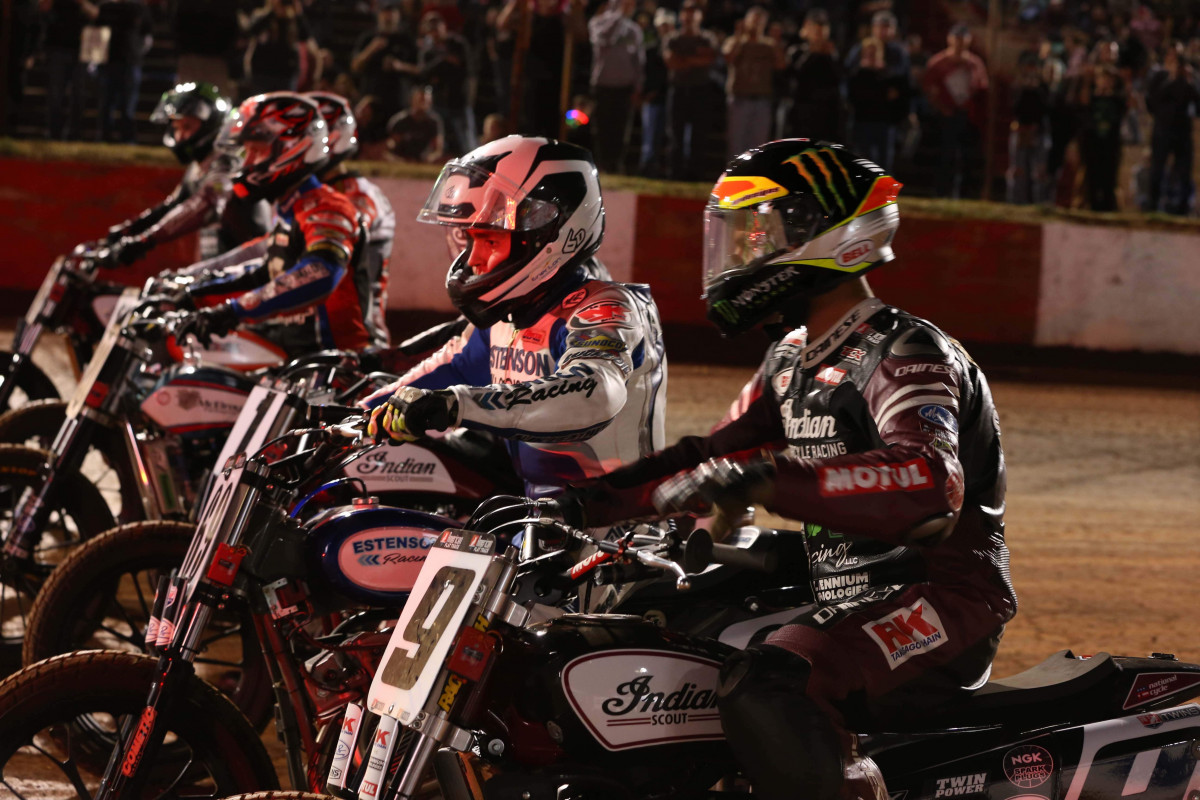 Short Track races are the rarest of the four AFT disciplines. An unforgiving arena where the speed that is most critical is that at which the action transpires, Short Tracks are compressed battlefields that favor the aggressive, the decisive, and the bold. Short Track racing rewards the disparate skills necessary to excel at TT and larger oval racing nearly equally, creating a field full of potential winners.

Leading that field into Atlanta’s AFT Twins presented by Vance & Hines round is reigning Grand National Champion Jared Mees (No. 1 Indian Motorcycle Rogers Racing SDI Scout FTR750). Mees parlayed the wave of momentum he built up during a record-breaking 2017 campaign into a convincing victory in the season-opening DAYTONA TT. 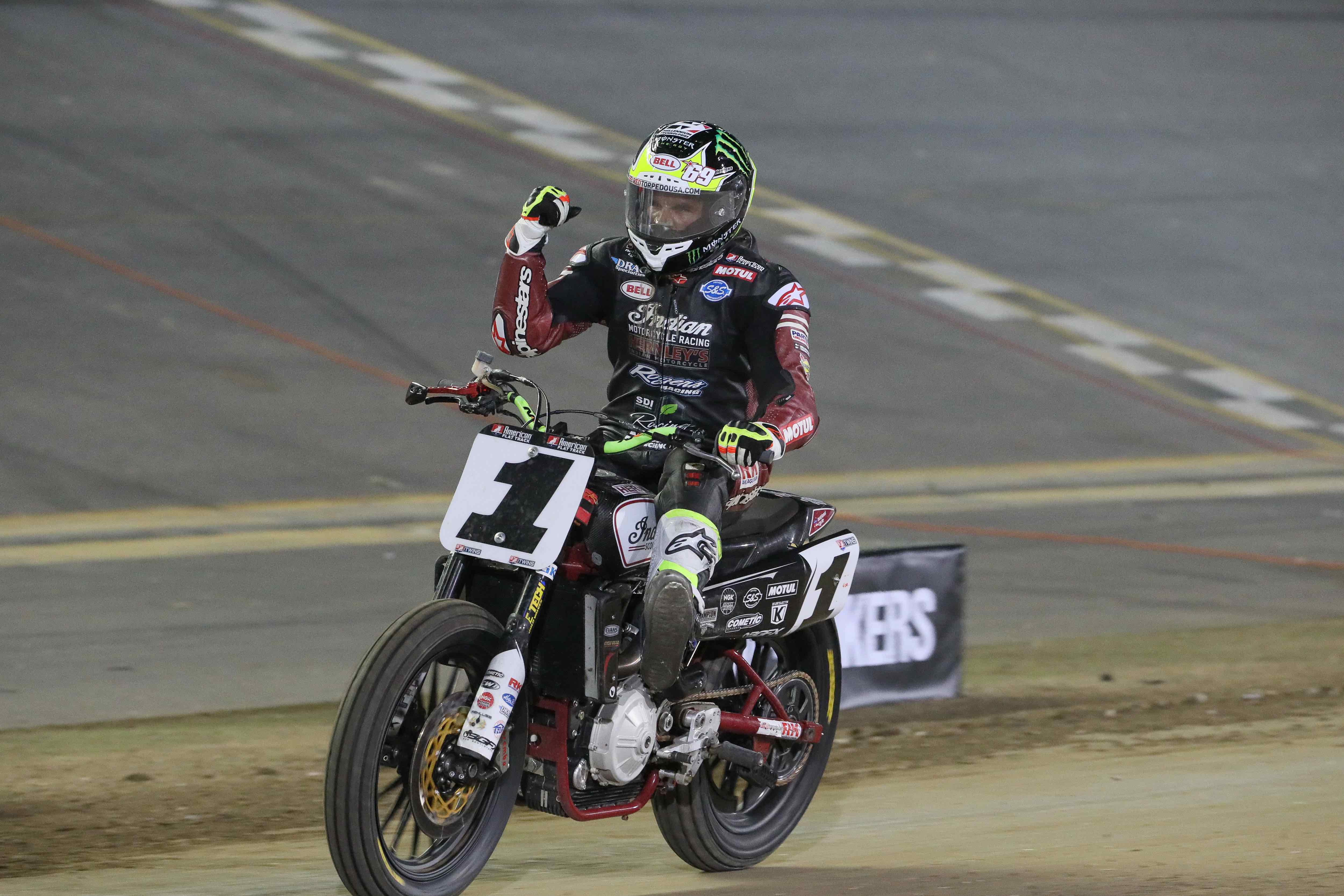 DAYTONA TT winner Jared Mees will be tough to stop in Atlanta. After all, he won at Dixie last year, too.

While a deep pack of would-be AFT Twins title hopefuls – including Harley-Davidson factory rider ‘Slammin’ Sammy Halbert, who ran right with Mees at last year’s Atlanta round – already find themselves chasing the defending champ, Mees is busy chasing history. Prior to 2017, the Pennsylvania native was already a multi-time Grand National Champion, but he had built that resume primarily on the back of his mastery of the Half-Mile. However, last season, Mees elevated his game to another level completely, and established himself as the rider to beat on any given weekend regardless of venue or discipline.

Last year’s performance in the inaugural Atlanta Short Track was one of the earliest signs of what was to come. There Mees secured his first-career Short Track victory in dominant fashion, a high point in a season that also saw him score his first TT triumph and double up his all-time Mile wins record.

As a result, Mees now stands tied with Will Davis for eighth all-time in career premier class victories at 31. Should he continue to rack up race wins at anywhere near his current pace, he’ll move alongside dirt track icons Scott Parker, Chris Carr, Jay Springsteen, and Ricky Graham before the year is out to rank as one of the five most winningest riders in the history of the sport.

Despite all of the accolades and achievements, Mees continues to take it race by race. “I’m glad to get right back in the game after Daytona,” he said. “Last year, we had success at Atlanta, and I feel it's a good track for us. Of course, the goal is to keep winning.”

While Baker remains perpetually fueled by his ambition to at last secure his first Indian-mounted victory, Smith will be motivated to come back swinging following a ninth-place ride in Daytona. Smith has twice reigned supreme at Short Tracks in the past and should be considered a genuine threat to claim a third ST victory this weekend. 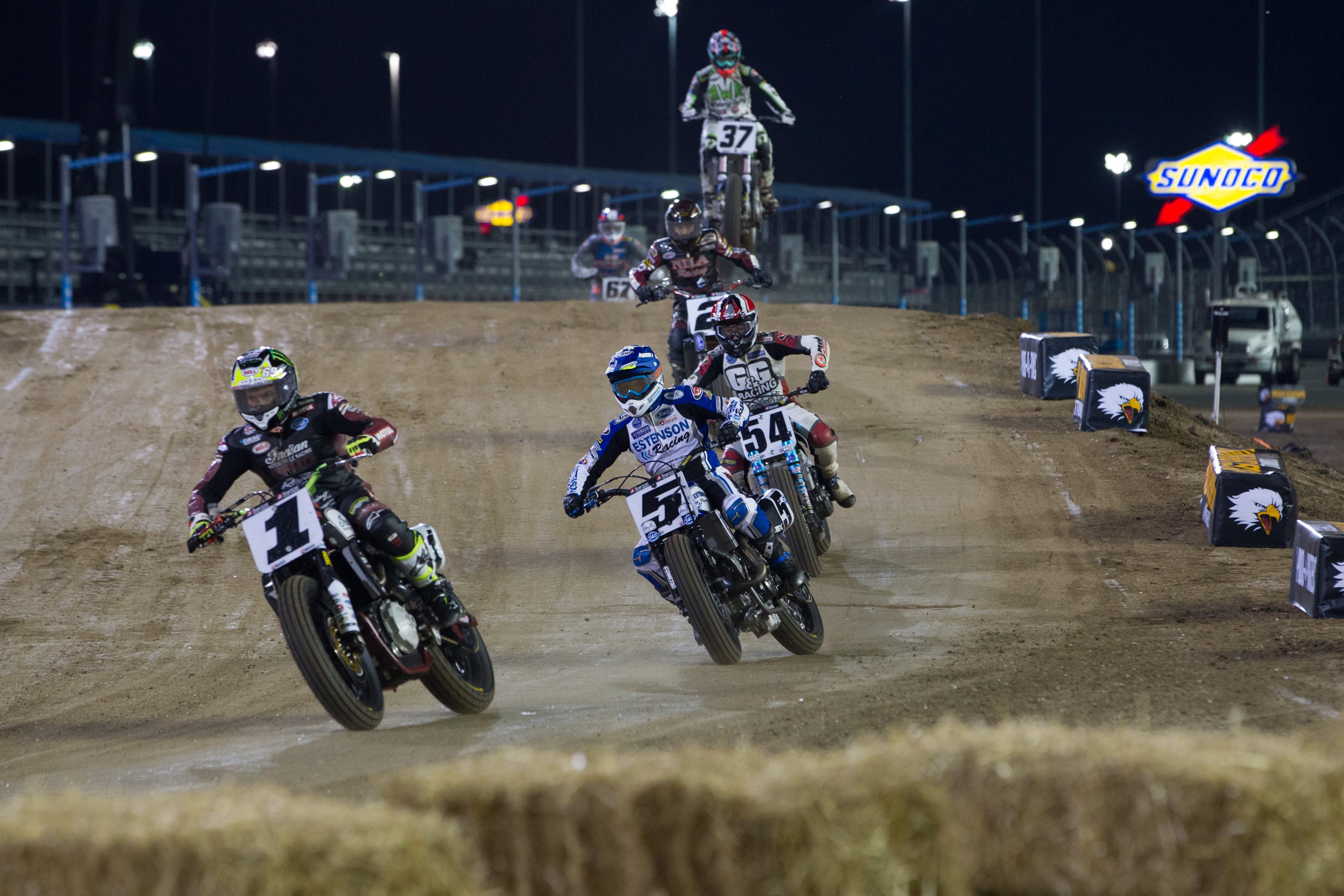 Estenson Racing's Jake Johnson (#5) could be one of several spoilers for Mees at the Atlanta AFT round.

But don’t expect the Indian Wrecking Crew to just waltz into Atlanta and pull a repeat. There are any number of other riders who have demonstrated serious Short Track aptitude in their limited opportunities to do so over the years.

Perhaps best known for his TT exploits, Henry Wiles (No. 17 Wilco/Racing/Willy Built/Bandit Industries Kawasaki Ninja 650) is also a Short Track sensation. If he were to score a 10th career ST win this weekend in Atlanta, Wiles would break a tie with the aforementioned Chris Carr to stand alone as the series’ most accomplished Short Track ace. Fresh off a podium ride at the DAYTONA TT – a race in which he felt he let a potential victory slip away – expect Wiles to jump on any opportunity to make amends (and history) in Atlanta.

And don’t sleep on DAYTONA TT runner-up JD Beach (No. 95 G&G Racing/Rickdiculous Racing/Team95 Yamaha FZ-07), despite his part-time series status. The MotoAmerica star was not only the closest man to Mees in Daytona, he also beat all comers in a stacked international field his last time out in Short Track competition with a triumphant performance in last December’s Superprestigio. With nothing to lose and no need to settle for points to consolidate his championship position, Beach could be a wild card in every sense this weekend.

Sammy Halbert (No. 69 Harley-Davidson Factory Flat Track Team XG750R) and Briar Bauman (No. 14 Zanotti Racing Kawasaki Ninja 650) also rank among the paddock’s leading aces in tight confines. Halbert boasts four career ST wins, good enough to tie him for sixth all-time. Bauman, meanwhile, has quickly racked up a pair of Short Track wins himself. Both riders were in contention in last year’s Atlanta Short Track, with Bauman finishing just off the podium in fourth and Halbert coming home sixth after a high-speed, for-the-lead tangle with Mees in the Main that put him down and caused a red-flag restart.

Besides Halbert, the works Harley-Davidson outfit also reeled in another talented Short Track rider with the offseason acquisition of Jarod Vanderkooi (No. 20 Harley-Davidson Factory Flat Track Team XG750R). Vanderkooi finished one spot ahead of Halbert to round out the top five in Atlanta a year ago, equaling his best finish of the season.

Estenson Racing's Jake Johnson (#5) is yet another potential spoiler for Mees at Atlanta this weekend.

And finally, a pair of former champions could be in line for a much-welcomed return to form. Jake Johnson (No. 5 Estenson Racing Yamaha FZ-07) and Kenny Coolbeth (No. 2 Nila Racing, Columbia Avionic Indian Scout FTR750) suffered through difficult 2017 seasons, but both appear rejuvenated by their respective change in surroundings for 2018. That could spell trouble for the competition; Johnson is one of the sport’s best-ever in Short Track competition, boasting seven career ST wins (3rd all-time) to his name. Coolbeth has proven to be no slouch himself, with three such wins of his own.

Ticket prices start at just $35, and can be purchased – along with a wide range of VIP and Tailgate ticket options – at https://www.showclix.com/event/atlanta-short-track.

Gates open at 1:00 pm, time timed practice set to begin at 2:00 pm. Get up close and personal the riders during an open paddock and rider autograph session from 4:30 to 5:30 pm. Opening Ceremonies are slated to begin at 6:00 pm, kicking off a night of racing starting at 6:30.

Those who can’t make the trip to Atlanta can watch the entire afternoon and evening’s practice, qualifying and racing live and as-it-happens on FansChoice.tv. And don’t forget to catch the NBCSN broadcast of the race, premiering April 14 at 5:30 pm ET and re-airing April 18 at 4:00 pm ET onNBCSN.

NBCSN and FansChoice.tv are the official homes for coverage of American Flat Track. For the 2018 season, NBCSN’s coverage of AFT moves to highly-coveted, weekend afternoon programming slots within two weeks of each event. The complete schedule for AFT on NBCSN can be viewed at http://www.americanflattrack.com/events-nbcsn/. FansChoice.tv remains a cornerstone of AFT's digital strategy, providing live streaming coverage of every event on AFT’s live page while previous events and exclusive features are available on AFT’s VOD page.