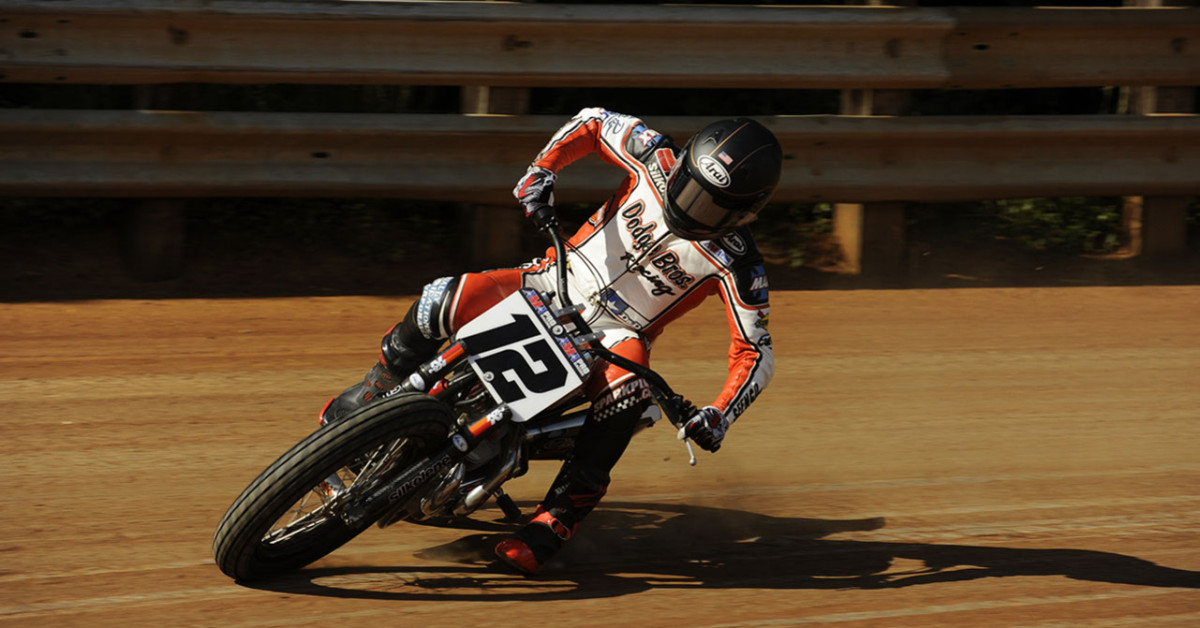 DAYTONA BEACH, Fla. (July 11, 2013) - AMA Pro Flat Track presented by J&P Cycles riders were back on the grid last weekend and it was Brad Baker (No. 12 Dodge Bros Racing/Harley-Davidson) who was in the spotlight all night long at Hagerstown Speedway, winning his heat race, the Dash for Cash to claim a $1,000 payout and eventually laying claim to the coveted Grand National Expert main event checkered flag to cap off the night. After recording second-place in all three main events in 2013 leading up to the 32nd Annual Hub City Classic at the Hagerstown Half-Mile in Hagerstown, Md., Baker silenced all of his critics with his most astonishing performance to date, earning the victory by over six full seconds.

"It feels amazing, I haven't been in the game very long as far as the expert level goes," said Baker. "But it feels like it took forever to get that first win. My motorcycle was absolutely top of the line tonight and I can't thank my team and sponsors enough. It was definitely the most comfortable I've felt on a motorcycle in a long time. I've been so eager to get this first win out of the way for a long time now and it just feels amazing to finally get it."

The win marked Baker's first at the Grand National Expert level since making the transition from J&P Cycles Pro Singles in 2011 and by the looks of it Saturday night, there will be many more victories to come. Baker, who is only 20-years-old, has been on the cusp of greatness for several years now and it shouldn't be a surprise to anyone familiar with the sport on how well he has performed thus far in 2013.

Baker barely breached the surface of the Grand National Expert level in 2010 when he competed in just two races. But in 2011 in his first full season in the elite class, Baker immediately made his presence felt around the paddock and name known among the spectators, finishing 6th in the Overall Grant National Expert point standings and following that up with a strong 5th place overall finish in 2012. Now, in 2013, Baker currently sits atop the point standings and is widely considered a top-tier favorite to claim the coveted Grand National Championship - though the season is still very young.

While there was no denying Brad Baker stole the show with his perfect performance last weekend, there are still several other notable headlines that the Grand National Expert main event brought to attention.

As secure as Baker's lead was throughout the duration of the race, Jake Shoemaker's grip on second-place was almost just as strong. Shoemaker, who made just his second ever start at the Grand National Expert level last weekend, looked very sharp on his Kawasaki EX650 as he finished a full 2.526 seconds over a herd of riders fighting for third. With the second-place finish, Shoemaker is the current Saddlemen Rookie of the Year point leader. The award grants a $5,000 payout to the highest point scoring first year full-time rookie.

It was Bryan Smith who claimed the final podium spot with a strong finish on his No. 42 Crosley Radio Kawasaki EX650.

If he didn't before, Brandon Robinson now knows that dirt track racing can be a very humbling sport. The Oxford, Penn. native took a gigantic step back at Hagerstown with a 17th place finish and was on the verge of getting lapped by Baker at the very end. Robinson was the Overall Grand National Expert points leader heading into the weekend but saw that lead diminish quicker than it came. The No. 44 TJ Burnett Farms Racing competitor couldn't get out of Maryland fast enough and will look to rebound in a big way come Round 5 of action.

After winning GNC Twins Heat 1, R&J Racing's Doug Lawrence went on to finish fourth in his best performance of his career with No. 7 Whites Harley/Harley-Davidson rider Sammy Halbert coming in fifth, rounding out the top five.

All throughout the day, Jason Isennock was giving out free ice cream and Red Bull energy drinks to anyone who stopped by his paddock courtesy of his sponsor - High Dairy Stores. It just so turns out that ice cream and energy drinks would precisely be the only thing he would be giving out last weekend as the No. 30S Honda CRF450R pilot didn't give an inch of track when it mattered most on the final lap, outlasting a charging Wyatt Maguire after a valiant battle between the two for most of the main event.

It was Isennock's first career victory at the professional level and, to make the win even sweeter, he happened to get it in his home state of Maryland.

"Wyatt (Maguire) gave me a great run the whole way and it was just an awesome race," said Isennock. "I'm very happy to be on top, it's certainly been a long time coming. My team built me a rocket ship and I couldn't thank them enough. I want to say thank you to all of my sponsors and the fans for coming out and getting loud. This is just awesome."