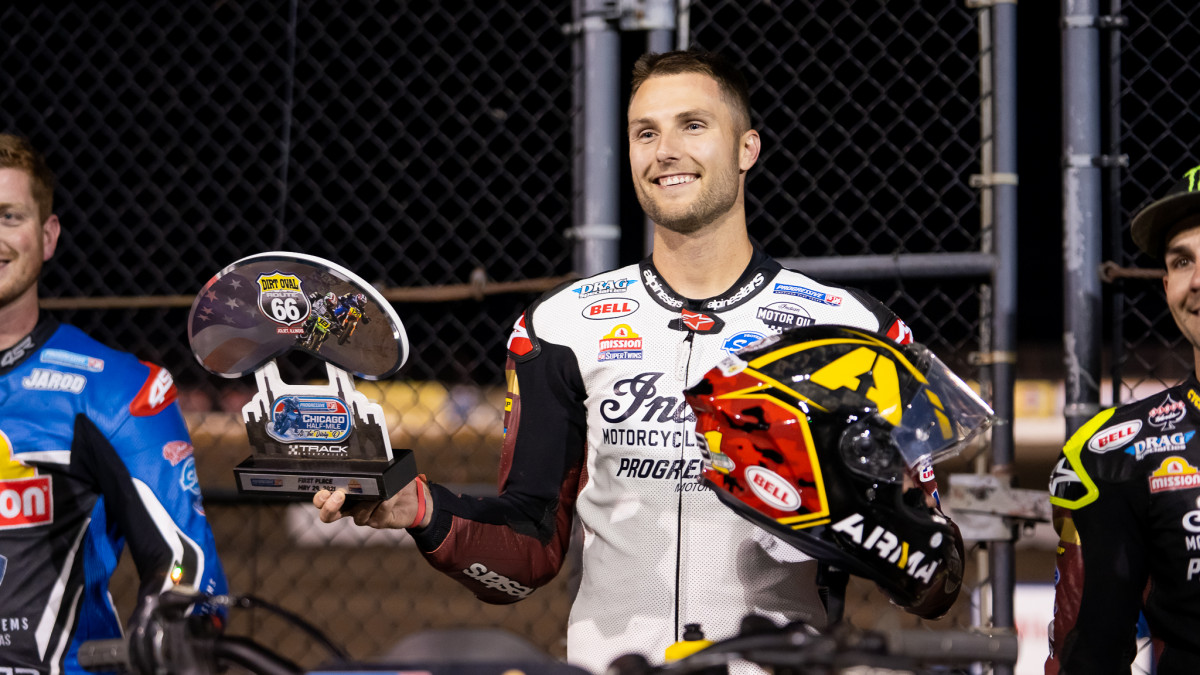 The victory couldn’t come soon enough for Bauman, who lined up for the evening’s Main Event burdened by an uncharacteristic eight-race Mission SuperTwins presented by S&S Cycle wins drought.

Early on, it looked as if Bauman was going to have to pull it out of his helmet if he were to end his winless streak on this night. A wild opening several minutes saw him repeatedly cross lines and swap positions as part of a energized five-rider lead pack that also included his brother Bronson Bauman (No. 37 Indian Motorcycle of Oklahoma City FTR750), Jared Mees (No. 9 Indian Motorcycle/Progressive Insurance FTR750), Jarod Vanderkooi (No. 20 Mission Roof Systems Indian FTR750), and Brandon Robinson (No. 44 Mission Roof Systems Indian FTR750).

Unfortunately, that scintillating multi-line dogfight for victory was cut short near mid-distance when Mees got into the back of Robinson's machine. In a slow-developing incident, Mees was stood up twice and was nearly thrown over the bars. Ultimately, he held on and stayed upright, but Robinson was not nearly so lucky as his bike was spun out from underneath him.

Moments later, James Rispoli (No. 43 Latus Motors Racing Harley-Davidson XG750R Rev X) joined Robinson on the deck, crashing as a result of the evasive action he took to avoid striking the downed rider. Robinson initially appeared destined for an ambulance ride but instead was cleared to line up at the very back of the staggered restart on his backup FTR750.

Reigning champion Bauman took point at the front of the staggered restart and put on a clinic from that point forward. He gradually gapped Mees, who later found himself more concerned with the looming presence of Vanderkooi in third. That concern was validated when Vanderkooi made his way through and locked down his second career premier-class runner-up in as many attempts. Mees continued on in third, which came as some relief considering he’s still on the mend with an injured left knee.

Bauman’s triumph not only put him back on top of the box, it also elevated him into the points lead for the first time in 2021.

After the race, he said, “Honestly, I’m just happy to be here racing again. I tried to say I wasn’t counting, but I was. It’s a weird deal; we were so dominant the second half of the season last year, and I haven’t been at all (in 2021). I’m going to be honest, the fire wasn’t there at all. I’ve been kind of burnt out on a lot of things and just kind of enjoying my time at home with Shayna (Texter-Bauman) and my dog.

“Right now, the fire is back.”

Fourth went to an inspired Robinson, who translated his adrenaline, anger, and frontrunning pace into a fourth-place finish despite being forced to charge his way up through the pack. The result came as little comfort to Robinson, who felt like he’d been robbed of a golden opportunity for victory after earlier winning the Mission Challenge.

The trio has repeatedly factored heavily for victory only to come up just short dating back to Rush’s mid-season 2020 win. In fact, in the series’ previous 11 races, the three combined to rack up 11 podiums -- including seven runner-ups -- with zero wins.

That was bound to end on Saturday as Rush, Mischler, and Whale quickly took formation in a three-wide group powering away from the remainder of the field. Rush controlled the opening laps after getting the holeshot, Mischler used the high line to run out front in the middle portions of the contest, while Whale surged forward with a pair of inside maneuvers to claim the lead with three minutes remaining. After that, the Aussie proved unassailable even if he couldn’t completely shake free from the pressure of Mischler and Rush.

The win was Whale’s first since earning his maiden Progressive AFT victory at the 2020 Volusia season opener.

He said, “That Main Event was so much fun. I found a line early on in the race that was working well. As the race went on, I noticed a front wheel a couple times on the inside and the outside, so I knew I could change it up. I started switching up my line about halfway through and found one and it stayed there. I’m so pumped about that.”

The final bit of drama took place when Mischler’s machine puffed a bit of smoke on the final lap just as Rush was closing in, only to completely let loose when Mischler took the checkered flag 0.172 seconds ahead in second.

Despite never challenging for the win, reigning class champion Dallas Daniels (No. 1 Estenson Racing Yamaha YZ450F) continues to lead the title fight -- albeit only by a point over teammate Rush -- after taking a relatively quiet fourth. Daniels was followed home by Michael Inderbitzin (No. 54 Pacific Tub & Tile Honda CRF450R), who rounded out the top five.

The battle gradually took shape over the course of a highly entertaining Main Event as the early thrills at the front were delivered by the likes of Dalton Gauthier (No. 79 D&D Cycles/Vance & Hines Harley-Davidson XG750R), Danny Eslick (No. 64 Pro One Industries Kawasaki Ninja 650), Johnny Lewis (No. 10 Moto Anatomy X Powered by Royal Enfield Twins FT), and Ben Lowe (No. 25 Mission Roof Systems Harley-Davidson XG750R).

At mid-distance Eslick was doing all that he could to fend off a fleet of Harleys aboard his Kawasaki from the low line, at least until Cose made his move. The Californian went around Eslick and then up the inside of Lowe in rapid succession and put his head down in a bid to escape.

Texter, meanwhile, systematically worked his way forward from further behind, closing in on Cose as the minutes ticked away. Once Texter decided to make his push for the win, the jockeying kicked into high gear. The final minute (plus two laps) saw the two trade the lead back and forth on five occasions, with Texter executing the final maneuver just as the two took the white flag.

Cose made one last desperate attempt around the outside but came up 0.114 seconds short at the checkered flag.

Texter relished in proving his doubters wrong yet again. After the race he said, “I know these guys are super talented -- they’re probably more talented than me. But I just don’t feel like anybody is putting the work in that I am, day after day, and I have to because these guys are such good riders.

“It was a crazy race. I was back there, but I just don’t quit. I wanted to win it so bad. Chad rode such a good race; it’s fun when you can race one of your buddies because it was just like we were in the backyard play riding. That was awesome.”

Daytona 200 legend Eslick rounded out the podium with Lowe a few tenths back fourth. Ryan Varnes (No. 68 RVR/RoyBuilt Don’s Kawasaki Ninja 650) marched his way up through the pack to complete the top five while early-race contenders Gauthier and Lewis faded to seventh and eighth, respectively.

The Chicago Half-Mile will air on NBCSN on Sunday, June 6, starting at 5:00 p.m. ET/2:00 p.m. PT. The broadcast will include exclusive features, cutting-edge aerial drone and onboard footage, and the expert commentary of Progressive AFT legend Chris Carr.

The stars of Progressive AFT will test the upper limits of speed, bravery, and excitement when the series unleashes the first Mile action of the season doubleheader style. The Indian Motorcycle of Oklahoma City OKC Mile I & II presented by KICKER at Remington Park in Oklahoma City, Oklahoma, will take place on Friday, June 18, and Saturday, June 19. Tickets are available for purchase now at https://store.americanflattrack.com/ebooking/ticket/view/id/3323/#selectTickets. For those viewing from home, live coverage will be available on any device for only $1.99 a month via TrackPass on NBC Sports Gold.