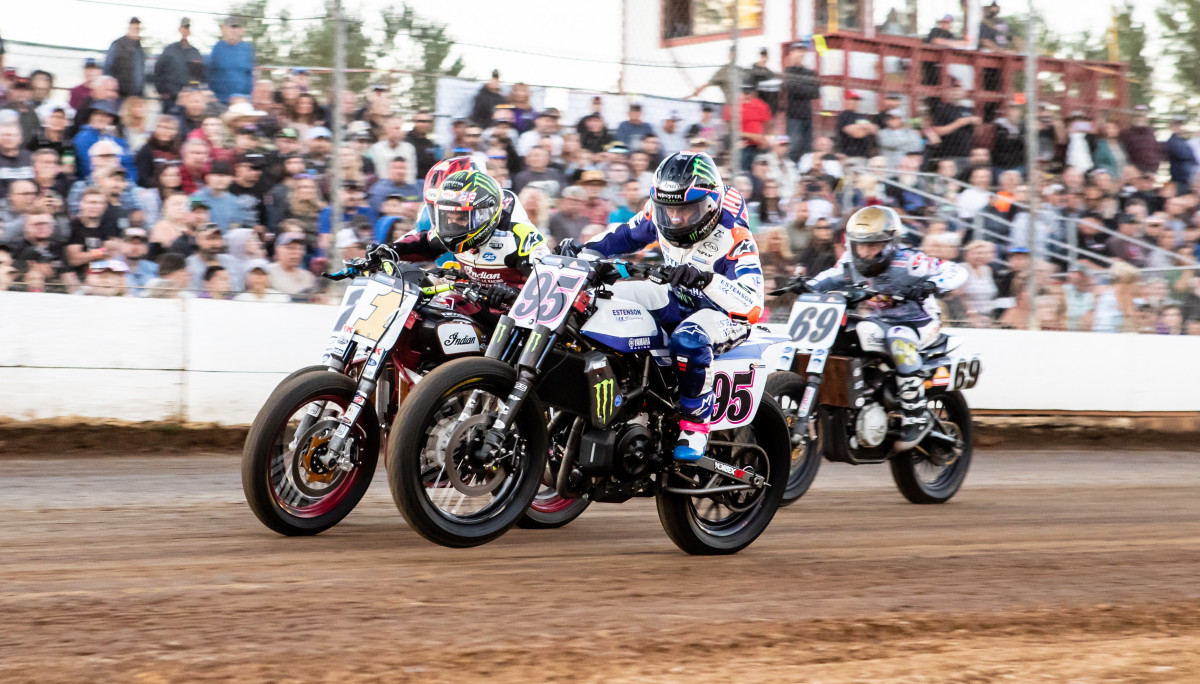 Beach, who grew up racing at the Castle Rock, Washington, venue as a youngster, was backed throughout the Mission SuperTwins presented by S&S Cycle Main Event by a sellout crowd that flocked to the event co-promoted by Thor Drake and The One Motorcycle Show.

He did not disappoint.

The start was always destined to be critical at a track where overtaking opportunities were at a premium, but no one could have predicted just how impactful it would prove to be. Dallas Daniels (No. 32 Estenson Racing Yamaha MT-07 DT), who started alongside Beach on the front row after the Yamaha teammates won their respective Semis, threw his hand in the air when his machine lost power just seconds into the Main Event.

While Daniels would go on to make an impressive charge to a fourth-place finish from his back-row restart grid position, the incident effectively removed him from contention for the win after he previously looked to be Beach’s biggest concern.

With Daniels busy slashing his way up through the pack, Beach rocketed away off the start and piled it on, stacking up more than a second on the field less than two short laps into the race.

Reigning Mission SuperTwins champ Jared Mees (No. 1 Indian Motorcycle/Progressive Insurance FTR750) beat teammate/rival Briar Bauman (No. 3 Indian Motorcycle/Progressive Insurance FTR750) in the sprint to Turn 1. Whether a result of a calculated decision or a forced hand, Mees spent the Main focused behind him rather than in front. The strategy paid off, though, as he managed to keep Bauman corralled behind him for full race distance to stretch his scant championship advantage out just a little bit further (209-203).

Beach, who now boasts six wins in the series’ most recent seven TTs, stands just three points behind Daniels for third (188-185). More importantly, both Estenson Racing aces are now within single-race striking distance of the championship lead with three consecutive Miles looming on the horizon.

“I was just pushing, pushing, pushing the whole time,” Beach said. “I didn’t look back. I didn’t know how close they were. For me, it was just about hitting my marks every single lap. Thanks to all the fans. It was a great night for me and my team, but we’ve still got a lot of races to go, and we’re starting to close the points gap just a little bit. We’ll keep working.”

A back-and-forth battle between the two played out over the course of the entire event. Throughout practice and qualifying, TT superstar Janisch looked to have the measure of the entire field once again. But a huge crash out of the lead in his Semi (and further difficulties getting his machine restarted after the fall) forced Janisch to open the Main from the back row.

That put Texter on pole after he won his Semi. However, he had his own issues to deal with, as the defending champion was competing despite feeling under the weather at the physically demanding course.

The next reversal of fortune occurred off the line, when Texter dropped from first to fourth while Janisch leapt up from ninth to fifth. Janisch quickly pounced on his title rival when Texter made a small bobble and then set off after the battle for the lead.

Holeshot winner Kayl Kolkman (No. 98 B&L Plumbing/Rod Lake Racing Yamaha MT-07) threatened to steal the win in what’s slated to be his only Progressive AFT race of the season, but a mistake approaching the jump allowed Johnny Lewis (No. 10 Moto Anatomy X Powered by Royal Enfield 650) to drive by into the lead. Janisch forced his way past Kolkman moments later as well, not wanting to provide Lewis any opportunity to make an escape at the front.

The Vance & Hines pilot then threw a number of unconventional lines at the Royal Enfield runner in hopes of finding a way through, a cat-and-mouse game that allowed Texter and Kolkman to close back in on the leaders as the clock ticked down to :00.

But with just two laps left to determine the winner, the red flags flew as a result of a crash on the part of Michael Hill (No. 47 Pacific Auto Trim/Jim Speer Yamaha MT-07).

Despite starting behind Lewis in a staggered restart formation, Janisch powered into first and then successfully defended the position to grab his fifth win of the season.

“Oh man, I had my work cut out for me with that mistake in the Semi,” Janisch said. “I was pretty convinced that was going to cost me. But I got off to two really good starts, and I just had to be aggressive early and make any pass I could.

“The Vance & Hines guys worked their tails off. We had a little problem after the crash but we got the bike running. We’re actually riding that same bike. Hats off to my guys. I like to say (getting an oval win) is way better, but this might be my favorite win so far. That was unreal.”

Lewis finished second, followed by Texter, who briefly dropped to fifth at the restart before fighting back to the podium in one of his best salvage jobs in a season packed with them.

Title leader Kody Kopp (No. 12 Red Bull KTM Factory Racing 450 SX-FFE) struggled off the line at the start and again in the subsequent restart, and then lost another position after coming together with third-placed Brandon Kitchen (No. 80 Vance & Hines/Husqvarna Motorcycles FC450).

Despite the rocky start(s), Kopp finally settled in and set about executing a charge to the front. First, he dove up the inside of teammate Max Whale (No. 18 Red Bull KTM Factory Racing 450 SX-FFE). He then took full advantage of a tactical error on the part of Trevor Brunner (No. 21 Estenson Racing Yamaha YZ450F), who opened the door for Kopp while looking for a line around the outside of race leader Gauthier.

But then – just as Kopp started to apply a heavy dose of pressure on Gauthier – a second red flag was shown following a Andrew Luker (No. 11 Rackley Racing/Keeran Racing Yamaha YZ450F) crash.

Kopp was frustratingly beaten off the line by Brunner for a third time and had a big job in front of him with time running out if he hoped to win in front of his home state fans. That harsh reality may have contributed to the race’s next dramatic turn; Kopp crashed from third with Spanish champion Ferran Cardús (No. 377 Roof Systems of Dallas/Bullet Strong Racing Honda CRF450R) catapulting over top of the fallen factory KTM, bringing out a third red flag.

That forced the championship leader to the back of the field while setting up a critical final start-line duel between Gauthier and Brunner. The Honda ace took the race’s final holeshot, setting him up perfectly to defend the position over his Yamaha-mounted adversary to the flag.

Gauthier said, “My team never stopped working, we were at it all day. I felt really good. I call myself a TT guy even though I sucked at Peoria this year. But I like this stuff where it’s tight and technical. I focused on the starts, tried to cover the inside, and did good, consistent laps. I played my cards right and it worked out.”

Kopp suffered his worst result of the year, finishing down in tenth. It was far from a total disaster, however, as he extended his point lead slightly in the process, finishing two positions ahead of second-ranked Morgen Mischler (No. 13 American Honda/Progressive Insurance CRF450R). He now leads by a healthy 46 points (243-197) with just five rounds remaining. Gauthier is third at 185.

The Parts Unlimited Castle Rock TT will premiere on FS1 on Sunday, August 21, at 11:30 a.m. ET/8:30 a.m. PT, including exclusive features, cutting-edge aerial drone and onboard footage, and expert commentary.

Progressive AFT will complete its run of four consecutive race wins in epic fashion with the Mission Legendary Sacramento Mile powered by Law Tigers at Cal Expo in Sacramento, California, on Saturday, August 20. Click here to secure your tickets today.