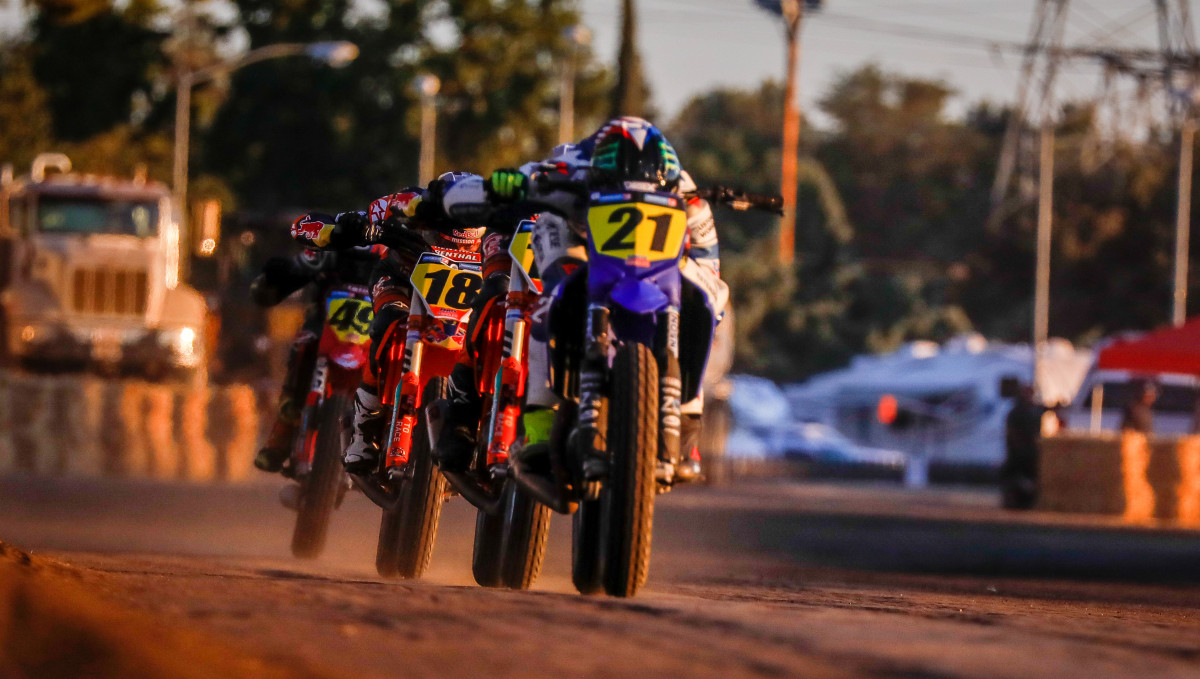 Brunner Bounces Back with Balance, Belief

Now this is the Trevor Brunner Progressive AFT fans have long wanted – long waited – to see.

The 19-year-old Estenson Racing pilot is on absolute fire as of late, storming up the Parts Unlimited AFT Singles presented by KICKER championship standings while taking out a mortgage on his place on the podium.

After opening the first seven races of the 2022 season with no podiums and a combined 84 points – good enough for sixth overall – Brunner has earned five podiums, including two wins, in the last six, upping his points tally to 204 while moving to within five points of second place.

That spectacular form comes as a mighty big relief for a one-time ‘future star’ who had yet to fulfill his immense potential.

So many heralded prospects never ascend to the heights once expected of them. Many are crushed under the pressure or suffer from a lack of confidence eroded by criticism. Some see their natural aggressiveness make the ugly transformation into recklessness, while the patience of others still is degraded into crippling tentativeness.

Brunner has overcome all of the above and is now firmly back on a career trajectory that had previously drawn comparisons to that of two-time Parts Unlimited AFT Singles champion and current Mission SuperTwins presented by S&S Cycle ace Dallas Daniels.

As an amateur, Brunner was named the Nicky Hayden AMA Flat Track Horizon Award recipient in 2019, one year after fellow Midwesterner Daniels. And while Daniels set the Progressive AFT world alight by winning in just his fifth professional race, Brunner was nearly as quick to stand atop the box, victorious in just his sixth.

The obvious potential Trevor demonstrated in his rookie 2020 campaign, earned him a slot with the factory-backed Turner Racing Honda outfit for 2021, where he continued his steep climb.

Daniels’ meanwhile, dominated the 2020 season and was looking good for another crown in 2021. With his graduation to the premier-class in the works, Estenson Racing Yamaha considered Brunner as a possibility to fill the void soon to be created in its lineup in the Parts Unlimited AFT Singles class when Daniels took the next step in his career.

But almost exactly one year ago, disaster struck for both parties, even if it struck with the checkered flag in Brunner’s hand. Driven to earn his second-career victory, Brunner executed an overly ambitious maneuver on the final lap of the Springfield Short Track, slamming Daniels to the ground and putting the champ’s hopes of a repeat title in serious jeopardy in order to steal the win away for himself.

The ‘win’ was short-lived, however, as it was later awarded to Daniels while Brunner was penalized down to 11th in the revised order.

And yet, here we are today, three hundred and sixty-some days later and Brunner is now adding to the proud Estenson Racing tradition that has seen the team rack up a combined 15 victories and 33 podiums since the start of 2020 alone.

Asked if he could imagine being in this position now on that night in Springfield, Brunner said, “Absolutely not. I had been talking to them here and there. They were kind of feeling me out at that point, and that whole situation happened. 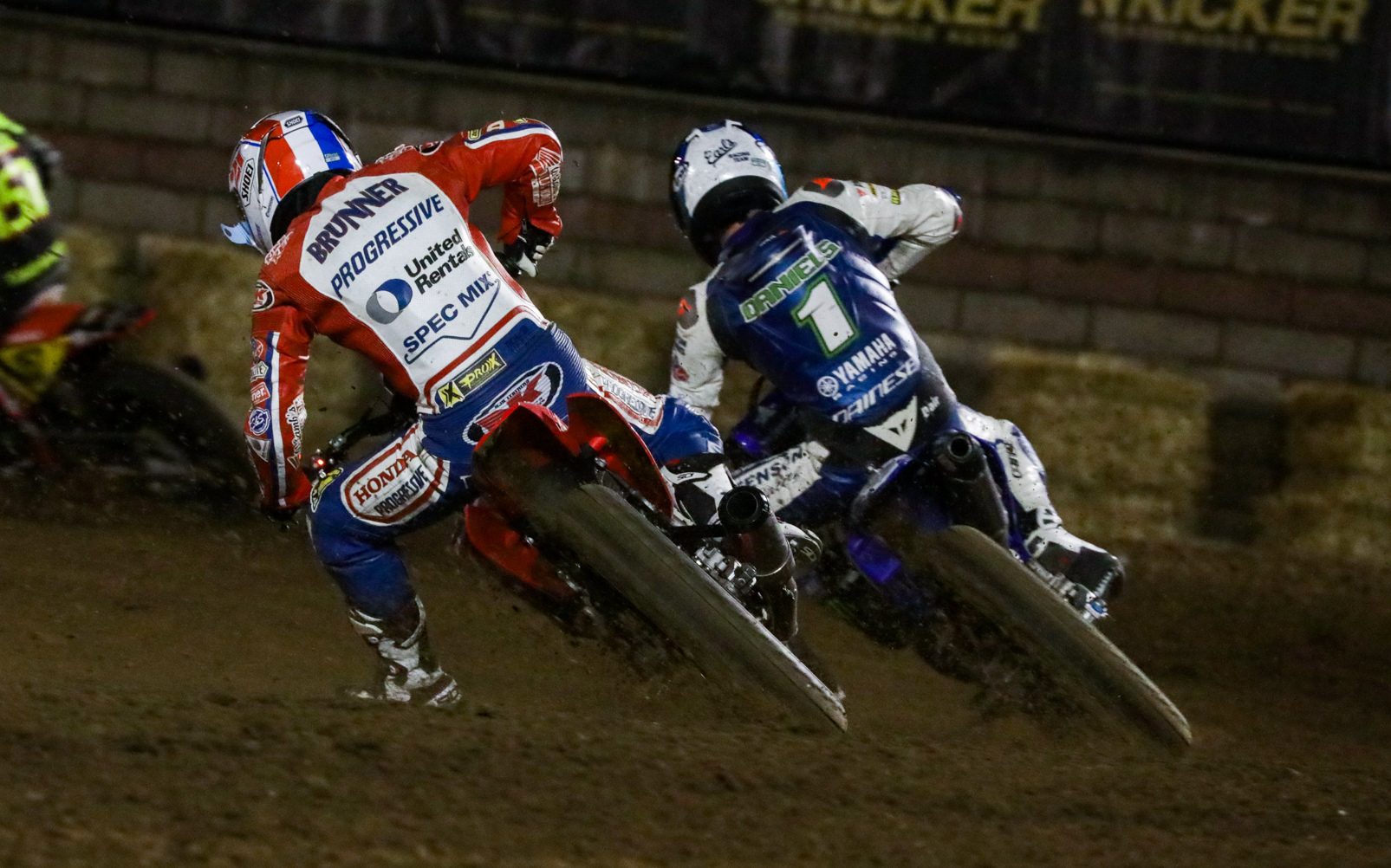 “You know, Dallas and I were decent buddies back in the amateur days. We were always running into each other at the races, just screwing around in the pits and being kids and stuff like that, back in the amateur days. We lived in different states so we weren't super close, but we were still buddies. And then we stayed like that my first year pro and everything. And then after that little incident, we just went silent. Nobody really talked to anybody.”

To his credit, Trevor responded well to the controversy, coming back later that night with a clean runner-up finish to Daniels in the event’s second Main Event and then sweeping the Sacramento Mile doubleheader the very next weekend.

It wasn’t until he took over Daniels’ seat at Estenson Racing that the enormity of the situation was felt in full and pressure to perform truly mounted.

Determined to continue forward on that parallel Daniels’ career track – and now on Dallas’ former machine and with Dallas’ father, Nick Daniels, as his crew chief for good measure – Brunner expected far too much from himself and came up far short of those expectations as a result.

Worse still, he made more of the sort of hyper-aggressive mistakes that nearly cost him the Estenson Racing gig in the first place. Incidents at the Texas Half-Mile and Red Mile resulted in injuries to Tanner Dean and Max Whale and left several other class competitors throwing up their arms in frustration.

“So then I made these stupid mistakes, get into these situations that are definitely not the best -- like the whole Max incident in Lexington, and one in Texas. I was just not riding like myself at all.”

Brunner’s response, quite naturally, was to tone down his aggression. And in an over-correction, he instead became tentative and lost his edge. Even declawed, he was still good enough to battle for the top five, but not the win, and winning is the whole point. 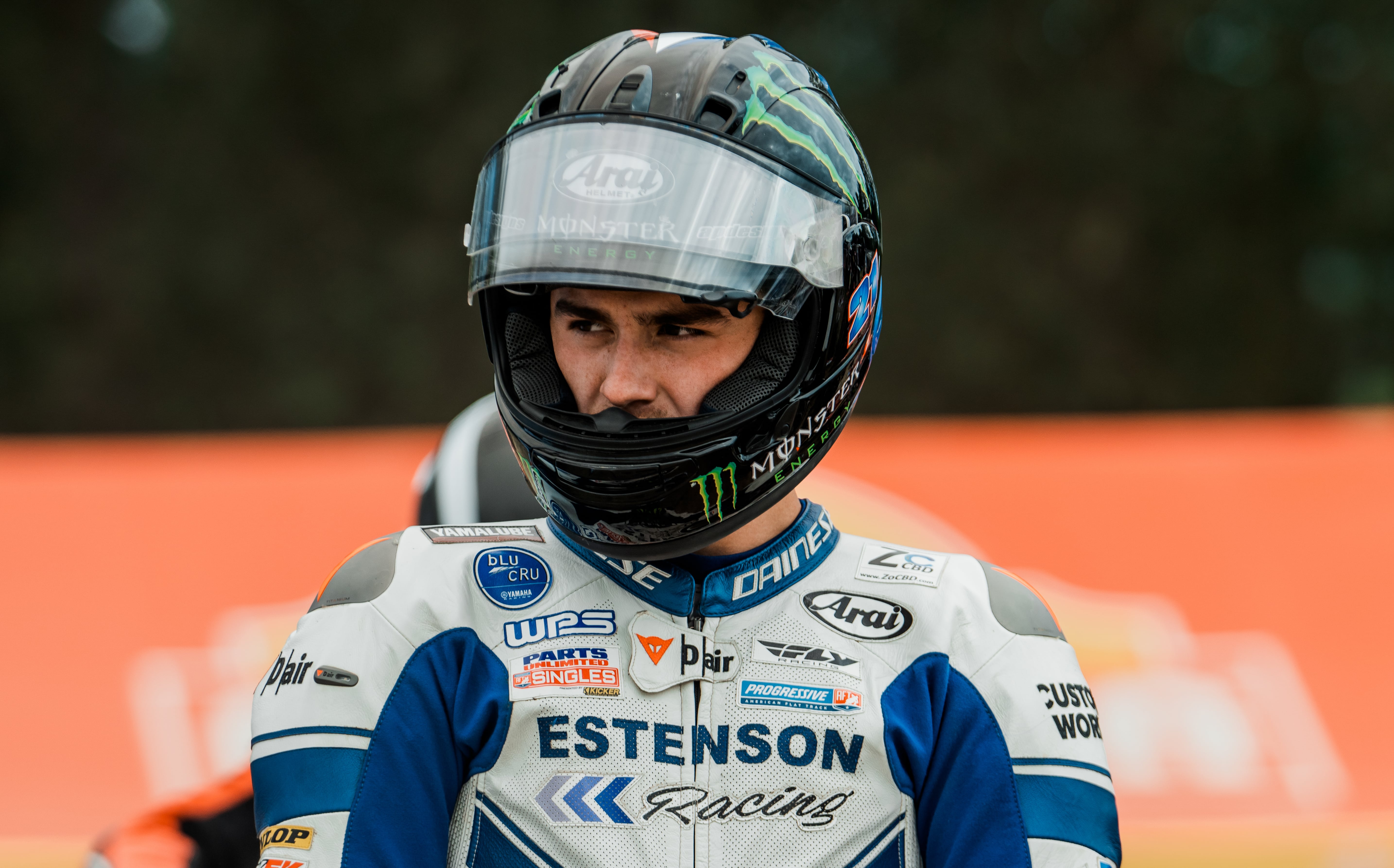 “I was super over-cautious because I didn't want it to happen again. I pretty much shot myself in the foot again, not from riding over-aggressive, but by not riding up to par at all. I went from one extreme to the other.”

Rather than cut their losses, the championship-caliber support system in place at Estenson Racing stepped up and unlocked Brunner, helping him not only discover where that fine edge between aggression and control exists, but establish a perch there.

“I finally found that balance through (Team Manager) Tommy Hayden and Nick Daniels, helping me through it and guiding me on what to do. All the knowledge they have is unbelievable – advice on drafting and different lines I could take and small little things I could be doing better.

“Obviously, that's not the first time they've ever seen someone put too much pressure on themselves. So, yeah, they were super helpful in that instance to kind of get me straightened back out. With their help, I got myself calmed down and just went back to my own roots and having fun while riding.”

In fact, Trevor credits the larger Estenson Racing organization for helping to pull off the turnaround.

“Everyone is real supportive and wants to reach out and figure out what's going on. They'll do anything for you to get you where you need to be, no questions asked. JD (Beach) is so keen on all the physical side of things, getting your training in check. Nick is so good with all the little motorcycle drills you can work on. Tommy is just so good with line choices and track decisions. And (Team owner) Tim Estenson is just a great guy to talk to all-around. He's the nicest guy ever.

“Everybody is so supportive, it really makes a good environment for you to excel in. You just have to use your resources wisely, not like I was at the beginning of the year. I mean, honestly, even like our electronics guys, Davey (Jones) and Scott (Crawford), were calling and saying, ‘Hey, we know you're not riding how you normally do. We know this isn't you. Let's try and work and figure out what's going on so we can get you back to where you need to be.’

“It's just an awesome spot to be in. I couldn't imagine being on any other team because I probably wouldn't have the support system that they provide. It's been a blessing.”

Which brings us back to Dallas Daniels, who has taken on a sort of big brother role even if he’s actually a few months younger than Brunner. 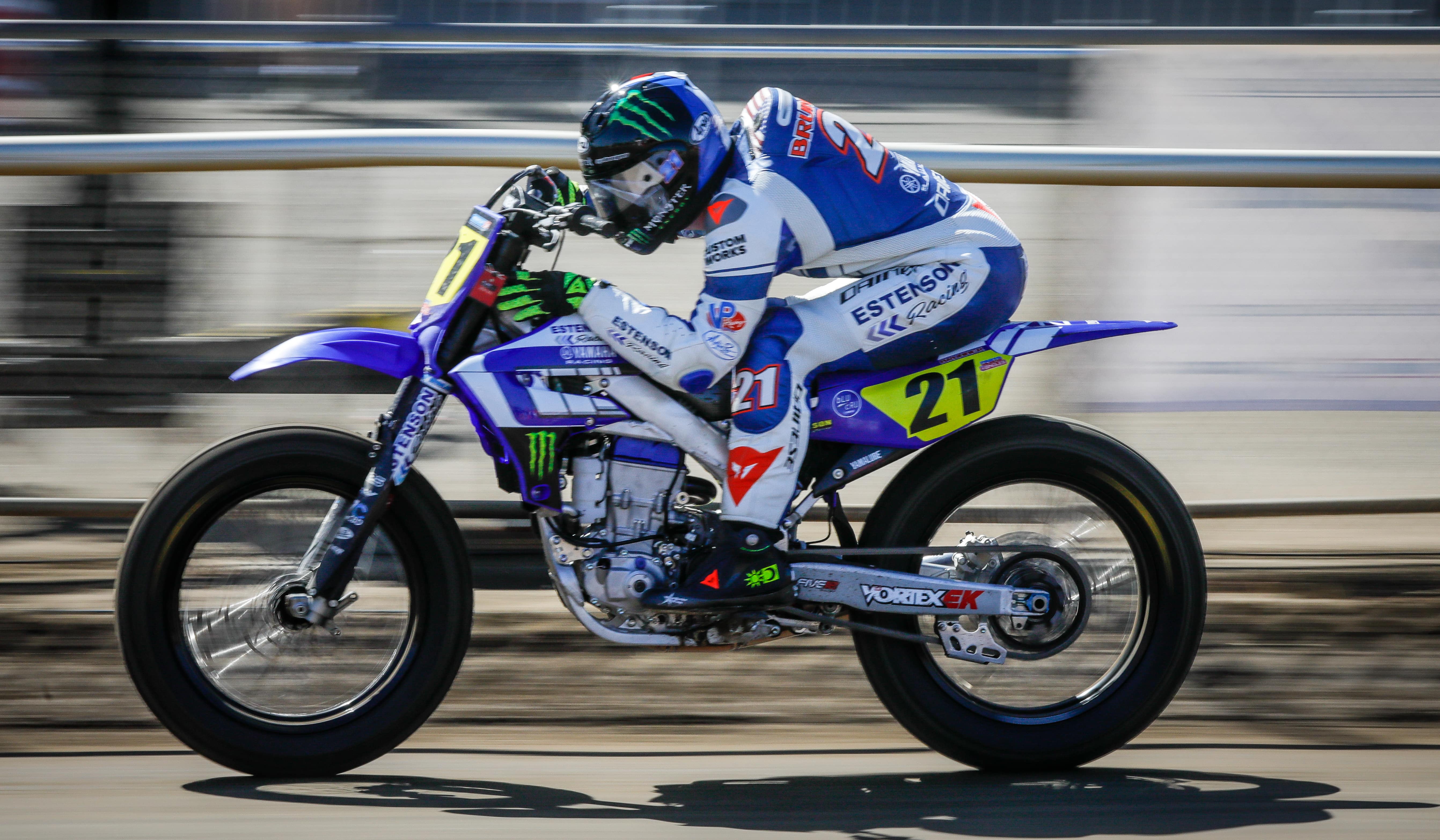 “It was almost like we were forced back into a relationship now that we're teammates, but it’s good, because now we're the best buddies ever. We talk every day.

“Even though he's so young, that guy is basically a veteran with all the knowledge that he's got. It's kind of weird to be saying that because of his age, but yeah, I look to him for advice for a lot of things during the day. I see him doing good and maybe I'm not doing so good, I'll go ask him about lines to take. And we're real good buddies, so he'll help me out. It's great. I love having him at the track and being able to bounce ideas off of him. We help each other go fast.”

Brunner is already looking forward to going bar-to-bar with Daniels again someday in the not-too-distant-future, but first he’d like to claim a Parts Unlimited AFT Singles #1 plate of his own.

“Ideally, I'd like to finish this year as strong as possible. Most likely get second, but if we can make a run at the championship this year, why not? And then next year, I'd either want to repeat or go back and try to win this championship. And then the year after that, if it's possible, I'd really like to go SuperTwins.

“But right now, I need to focus on staying level headed and keep moving in the right direction. We've got a lot of confidence going into these last few races of the year. We hope to keep the podium streak going.

“Obviously, it's going to be real close racing on the Mile at Springfield. Luckily, I really like Mile tracks. I think my strategies on Miles are kind of my speciality, so going into there with a lot of confidence, and the team has the bikes all sorted out.

“I think I've got the best team in the pits to help me go win this thing.”