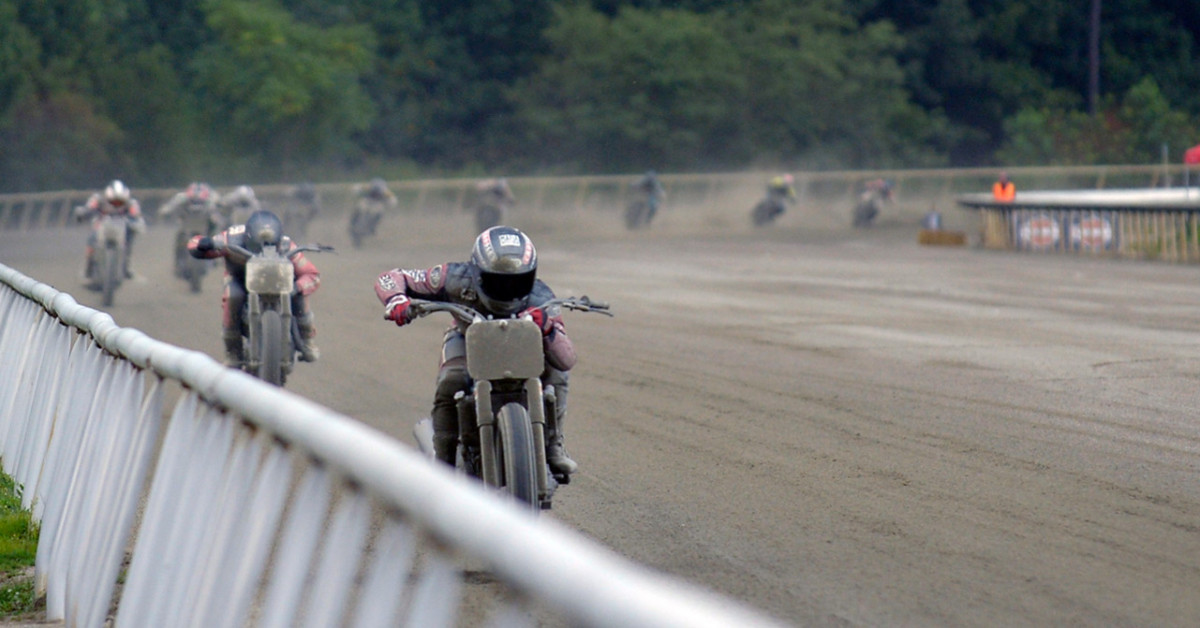 NEW KENT, Va. (Aug. 23, 2014) - Bryan Smith rode with a head full of steam and a face full of dirt through the entire field to win the Virginia Mega Mile, Round 13 of the AMA Pro Flat Track Grand National Championship season, in front of a raucous packed house at Colonial Downs on Saturday.

Smith was forced to start from the back row on his No. 42 Villa-Esparza/Crosley Radio Kawasaki after anticipating the start of the 15-lap Expert main, but skillfully carved through the field and took the lead on lap 4 before checking out and eventually winning by 2.559 seconds over second place Jake Shoemaker. Jake Johnson, who also started from the back row, was third.

“I needed to get to the lead in a hurry, so I was on the gas for sure,” Smith said. “The first couple laps were a blackout, I used all my tearoffs. I finally got into third and my bike was kind of getting hot, but I just put my head down and tried to stay out of the roost. And once I got in the lead, I could kind of ride my line, and, obviously, check out.

“That was not the way I wanted to do that. I think I had more dirt inside of my helmet than on the outside.”

Smith, who came into the day second, leaves Virginia with a six-point lead over Jared Mees (224-218). Johnson is third with 206. Smith also won the Dash for Cash.

Shoemaker was simply methodical on his No. 55 Montgomeryville Cycle Center Kawasaki, riding calm and staying free of trouble, mechanical or otherwise. He started 10th, on the second row, but was in the lead group until Smith joined it, then left it in his rooster tail.

“It feels great,” Shoemaker said. “My best finish this year was a third at Hagerstown, and to come here with a second and beat that on a track that I honestly wasn’t that comfortable with, just knowing I’m on a 700cc bike, I’m down on horsepower, to put it up in second, on the box with all these guys, with what I feel is lesser equipment, it really means a lot. It’s just awesome.”

Johnson was riding his third No. 5 Ramspur Winery machine of the day in the main event. After his first two bikes, both Ducatis, fell victim to the demands of the only 1.25-mile circuit on the AMA Pro Flat Track schedule, Johnson pulled out a Kawasaki and used a provisional start to race in the main.

While he didn’t move through the pack as quickly as Smith, he still knifed through with precision before battling Brad Baker on the No. 1 Factory Harley-Davidson, for third. Baker’s bike finally had enough on the final straight, allowing Johnson to slide into third and forcing Baker to settle for fourth.

“Coming from the fourth row, Bryan won the thing, so I can’t complain too bad about being back there,” Johnson said. “It was one hell of a race. The first five laps, I couldn’t see a thing. … Finally, things fanned out a little bit and I was able to start picking them off and work my way up through.

“A lot of ‘coulda, shoulda, wouldas.’ For how the day went, to come out with a podium, I’m pretty happy.”

Baker, who actually helped his bike across the finish line with a few kicks, was solidly in fourth while points leader Jared Mees finished fifth on his No. 9 Rogers Racing Harley-Davidson. Mees, using a backup bike, also started in the back, meaning the top three in the championship battle lined up alongside one another at the rear of the field to start the race.

Brandon Robinson (No. 44 USC Kawasaki) was sixth while Jeremy Higgins rode his No. 82 Baer Racing KTM to seventh after claiming his first-career heat race victory earlier in the day. Kenny Coolbeth (No. 2 Zanotti Racing Harley-Davidson), Henry Wiles (No. 17 Don’s Kawasaki) and Shawn Baer (No. 32 Baer Racing KTM) rounded out the top 10, respectively.

J.R. Addison made the most of this return to the track. After missing three months due to a back injury suffered at Springfield, Addison, on his No. 24F Parkinson Brothers Racing Honda came back at Virginia and used a last-lap pass to get by Kyle Johnson and claim his first victory of the season.

“This is my kind of track, so I was pretty excited for it,” Addison said. “I just wanted to come and have some fun. I was just hoping to do like a top 10, top 5 maybe. Pulling out the win, it’s so great.”

Johnson, on the No. 77J Parkinson Brothers Racing Honda, wasn’t on the top spot, but was happy to bounce back with a podium finish after crashing out of the Peoria TT. He was also nursing a bad right hand.

“It was definitely tough, we knew the track was going to rough, so we just had to fight through it,” Johnson said. “It felt good to get a good start, get out front and run my own line. Coming down to the end, J.R. was able to get us. I tried to draft him back to the start, but it was just a little bit too late. But it feels good to get second, definitely battling a bum hand.”

Jeffery Lowery rounded out the podium, recording the best finish of his career on his No. 23F Englehart Racing Honda.

“It feels great, I love his track,” Lowery said. “Everything was just great today.”