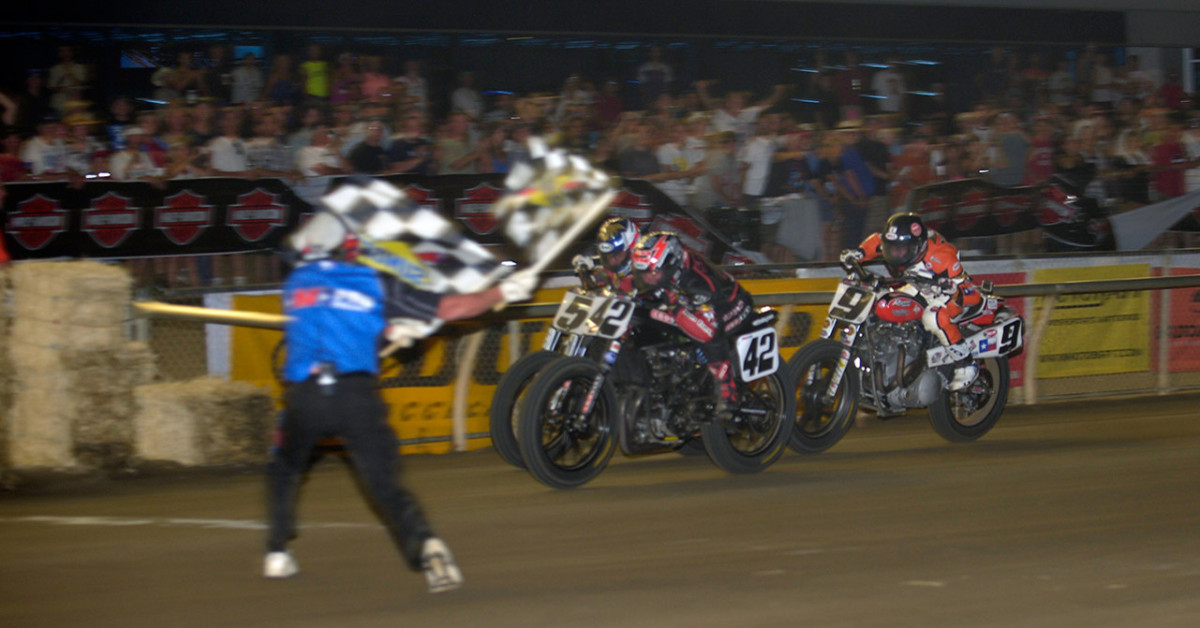 SACRAMENTO, Calif. (July 26, 2014) – If Bryan Smith was going to etch his name into the Sacramento Mile record books, he wasn’t going to do it without a fight.

The pilot of the No. 42 Villa Esparza/Crosley Radio Kawasaki became the first four-time consecutive Grand National Championship winner in the storied AMA Pro Flat Track race’s history at the Cal Expo on Saturday night, but the likes of Jake Johnson and Jared Mees made him earn it.

Smith, Mees and Johnson were joined at times by Henry Wiles, Brandon Robinson and Kenny Coolbeth in the fight up front in a 25-lap Expert main event that saw a different leader at one point on nearly every lap.

Ultimately, Smith was able to take the lead and keep Johnson from sliding past in a draft back to the checkered flag, winning by just .030 seconds. Mees was third, a scant .056 back of the winner.

Smith was well aware of this history he just made, but the adrenaline was still pumping as he spoke to the crowd following the victory.

“It’ll probably set in more when I get home with my buddy Scotty Parker that I just beat out for the record,” Smith said. “It’s a dream come true to come here four times in a row and win. This year was definitely the toughest, it felt like to me. Hopefully we can come back and do it again next year and make five.”

Smith is the leader in points at the season’s midpoint but by just two (150-148) over second place Mees.

Even though the race has belonged to Smith since it rejoined the GNC schedule in 2011, the Sacramento Mile never been a runaway victory for the Michigan native. Saturday night was yet another epic battle Smith was able to eke out.

“It wasn’t sure to me, it was a dogfight,” Smith said. “Jake and Jared were right therethe whole time. The way the track was, it made it so no one could really jump out there. … It was a scrap the whole race, it felt like to me. I was just as little looser in the corners than them guys, and, luckily, I was able to hold onto it.”

While a handful of riders were able to jump in front, Johnson, on the No. 5 Ramspur Winery Kawasaki, was the biggest threat to Smith. It was the first time Johnson, who has competed on a Ducati and Harley-Davidson, has ridden the Kawasaki this year.

“We struggled a bit most of the day,” Johnson said. “We had a brand new bike today and kind of went through some growing pains throughout the day. But main event time, we got it dialed in. Me and Bryan got out front, I was able to get by him a couple times, and he was able to get me back. And then Jared was mixing it up in there, and Brandon. I knew it was going to be a dogfight to the end.”

Mees and his No. 9 Rogers Racing Harley-Davidson gave it everything they had in the main, but wound up just short. It was still the fourth straight podium for Mees, who kept the points chase tight with his victory in the Dash for Cash.

Brandon Robinson and Coolbeth rounded out the top five and defending GNC champion Brad Baker was sixth. Wiles had a sudden mechanical issue on lap 6 after just taking the lead and had to retire.

Kyle Johnson was sitting in fifth on his No. 77J Parkinson Brothers Racing Honda while it looked like Davis Fisher was going to pull away to an easy victory on his 67M T.J. Burnett Farms Honda in the Pro Singles main at the Sacramento Mile.

But after Johnson dove to the bottom entering turn one and slid into second place at the midpoint of the race, he slowly reeled in his fellow championship contender. On the final lap, Johnson was able to get by and grab his fourth victory in the last five races.

“Davis was out front good, and the last couple of laps I was able to reel him in,” Johnson said. “I knew I had had to push it, and I drove past him. That last lap, in (turns) one and two, and three and four, I knew I had to push it, make the corner perfect, otherwiseDavis was going to go back past me.”
With the S

acramento Mile’s long straights, the draft played a huge factor. In fact, some might have said it was better to be in second coming off the final corner with a chance to draft by at the stripe. That was Fisher’s mindset.

California’s own Nick Armstrong rounded out the podium, finishing third on his No. 44E Southland Racing Honda.