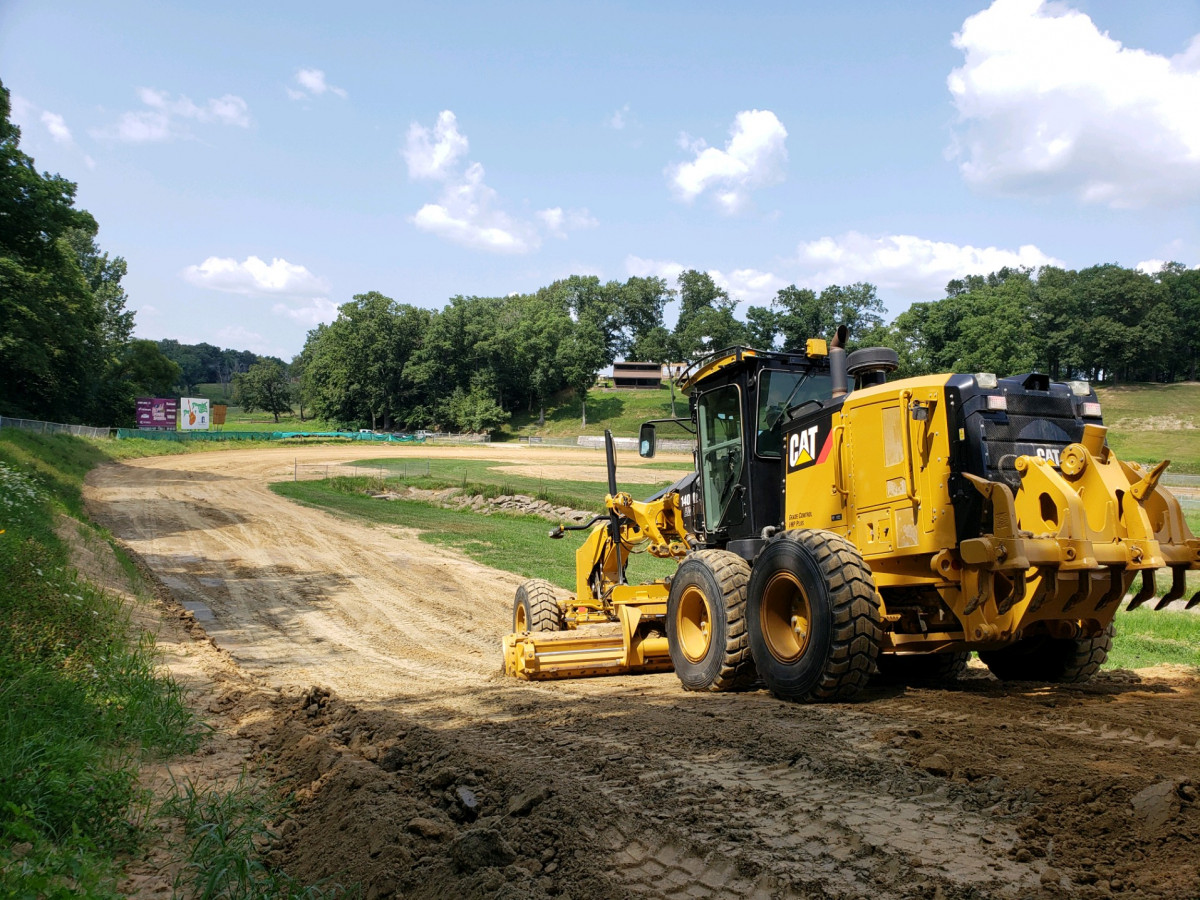 CAT to the Rescue at Peoria – Again!

Sometimes, small measures are just not enough. Sometimes, when there’s a big – or vitally important – job to do, you need to bring in the Big Guns. Use Strong Medicine. Or employ Extreme Measures.

At last year’s 72nd Peoria TT, American Flat Track and the Peoria Motorcycle Club had to do exactly that. A week of rain prior to the event had turned the Thunder Valley floor into a sloppy mess, with near-total saturation, foot-deep mud and zero chance that weekend to run what had become one of the most legendary, anticipated and exciting flat track Nationals of the season – especially with Henry Wiles’ 13-race win streak on the line.

Since none of the measures usually employed – Mother Nature, disking, running vehicles on the surface, or some combination thereof – were going to allow the race to run on Saturday, a meeting of AFT and PMC minds was called on Friday afternoon to figure out a plan. One of those minds belonged to John Swearinger, who was not only a longtime Peoria Motorcycle Club member and lifelong motorcycle enthusiast, but also a 25-year employee of Caterpillar, a company with deep roots in the Peoria area.

As a Service Engineer for CAT’s Global Dealer Solutions Network, Swearinger knew that only extreme measures were going to save the weekend from being a total bust. “Some of the top-level guys from our Edwards Demonstration team – who teach owners and operators worldwide how to use their vehicles – were in town that weekend,” Swearinger remembers, “and that seemed like the best way to get the racetrack ship-shape. After all, if they couldn’t get the track race-ready, no one could.” 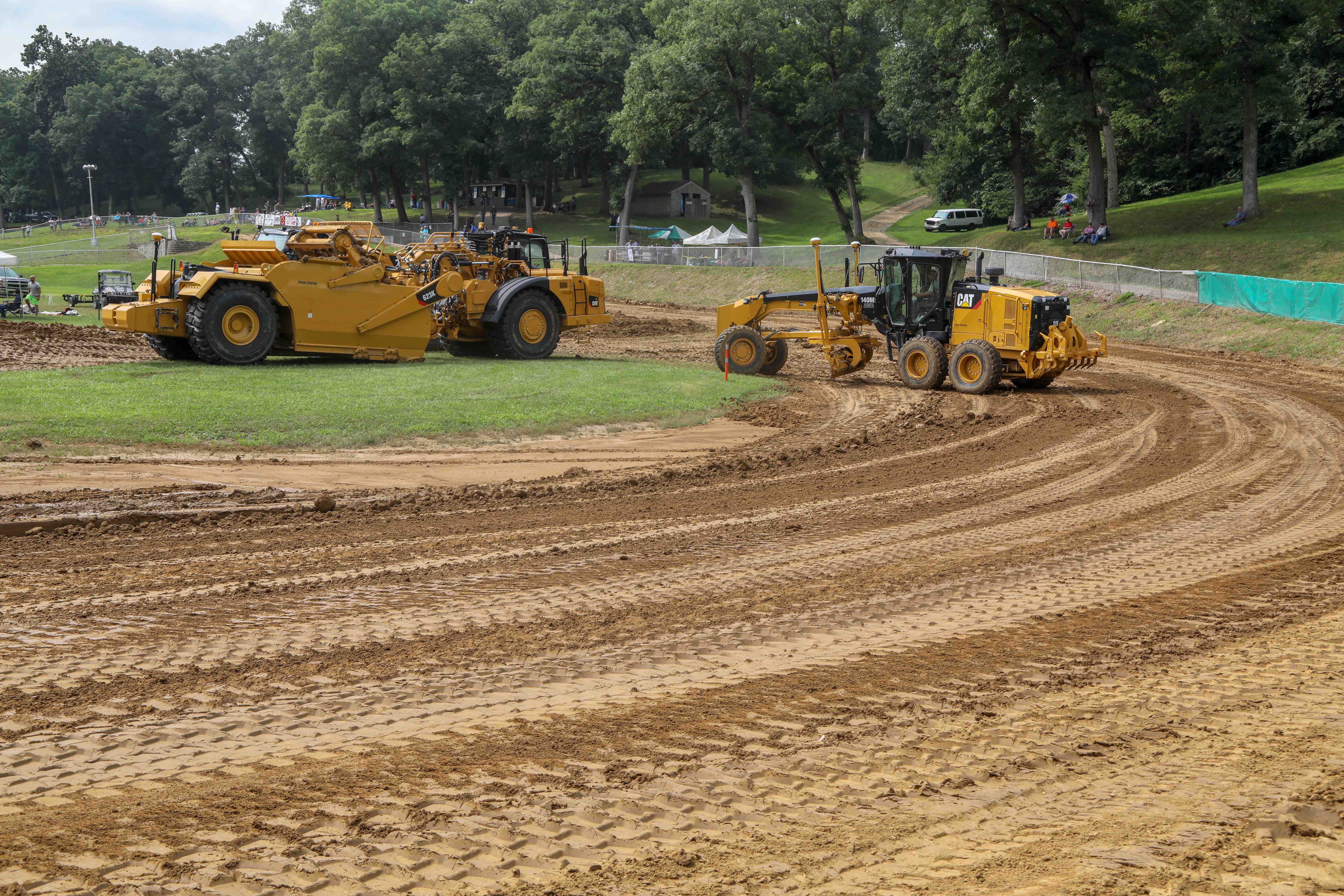 A plan was quickly devised. First, PMC staff would churn and aerate the top eight to 10 inches of soil for a few hours that evening with 4x4s, and just before midnight, larger CAT machinery disked and then sealed the surface from the evening’s dew and humidity. The next morning came phase two, and it was a biggie. Basically, the Edwards Demonstration folks arrived on scene with a handful of massive earth-moving equipment, the stuff typically used to build freeways, and proceeded to tear up, pile up, aerate and re-layer the top two feet of soil and clay along the entire half-mile of track.

It all worked. The churning and aerating dried the tons of earth enough so that when it was all laid back onto the track it was firm enough to race on – with Henry Wiles going on to win his record 14th-consecutive Peoria TT in dramatic fashion. It was a near-perfect example of teamwork and partnership in action.

Fast forward to another meeting in Peoria earlier this year, this time with only PMC members in attendance. The discussion wasn’t about mud but the legendary Peoria TT jump, which in the 72 years the circuit had hosted the legendary TT had become one of the most recognizable and iconic track features in all of racing.

The Peoria jump had undergone constant change in those many decades, from low and smooth in the early years to faster and steeper and just about everything in between in later years, especially after the spectator tunnel was rebuilt in the early 1980s. Use and erosion had made the jump even more daunting and quite a bit more dangerous, especially for the bigger, faster and heavier twin-cylinder machines, which were sidelined in the 1980s in favor or lighter and better handling 600cc and, later, 450cc Singles for the National TT. 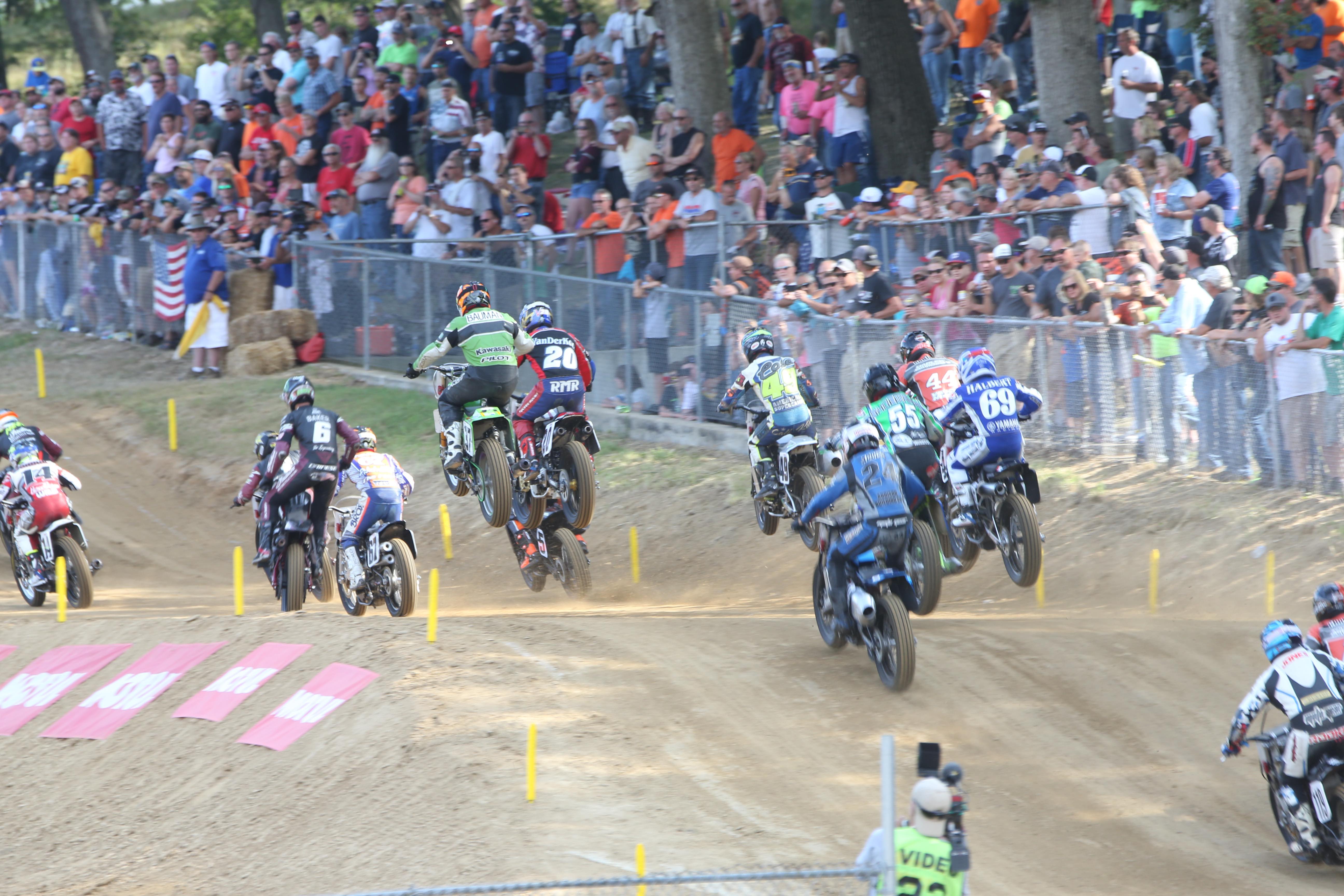 The 2017/'18 jump wasn't liked by riders or fans all that much, and had some riders hitting the second jump (sometimes sideways) just as their bikes' chassis were rebounding from the first launch. Brad Baker (6) demonstrates during the 2017 TT.

The high degree of risk and danger wasn’t just due to the steepness and speed of the jump but that the entire jump section was integrated into a slight left-hand dogleg, along with the obligatory right-hander just after the landing. This meant riders had to begin turning left and cutting across the face of the jump as they launched. This ‘turn-while-you-leap’ element often played havoc with the motorcycles, with riders getting sideways as they left the ground and, when landing, often being spit off their bikes in spectacular fashion – with predictable results. The cluster-crashes were numerous over the years, and many can still be seen on YouTube.

When AFT proposed bringing Twins back to the TTs for the 2017 season, the jump – then some 13 feet tall and a real launcher – was an obvious concern. “Chris Carr [AFT’s Chief Competition Officer at the time] said we’d need to change it or there’d be no race,” says Swearinger. “We weren’t going to give up the National, obviously, so we changed it, going from one big and steep jump to a jump in front of a jump … a 6.5-footer at the beginning of a 100-foot table, with another 6.5-footer later on. It was a compromise, really, and for many fans it’s been was a bit of a letdown, as riders weren’t getting nearly as much air. So the fans weren’t all that happy with it, the riders didn’t seem to like it much, and we weren’t happy with it, either.”

Another problem with the revised 2017 jump was that, due to the pro’s high speeds exiting turn two, many riders were hitting the second jump just as they landed from the first. A race bike’s suspension is compressing and then rebounding as the bike regains the ground, and this moment of chassis instability can be a problem if you hit another jump at the same time.

“Even after all the changes of 2017 the jump still wasn’t as safe and exciting as it could be, and at the PMC we all felt we needed to try again,” says Swearinger. “It was basically a compromise, a failed experiment. So we approached Joey Mancari, AFT’s new Chief Competition Officer. He was receptive to making things more exciting for fans and riders but stressed in no uncertain terms that safety would remain the key determining factor.

“What we wanted,” Swearinger added, “was a more exciting and safer jump, one with a low trajectory but enough flying distance to keep things interesting for riders and fans.” 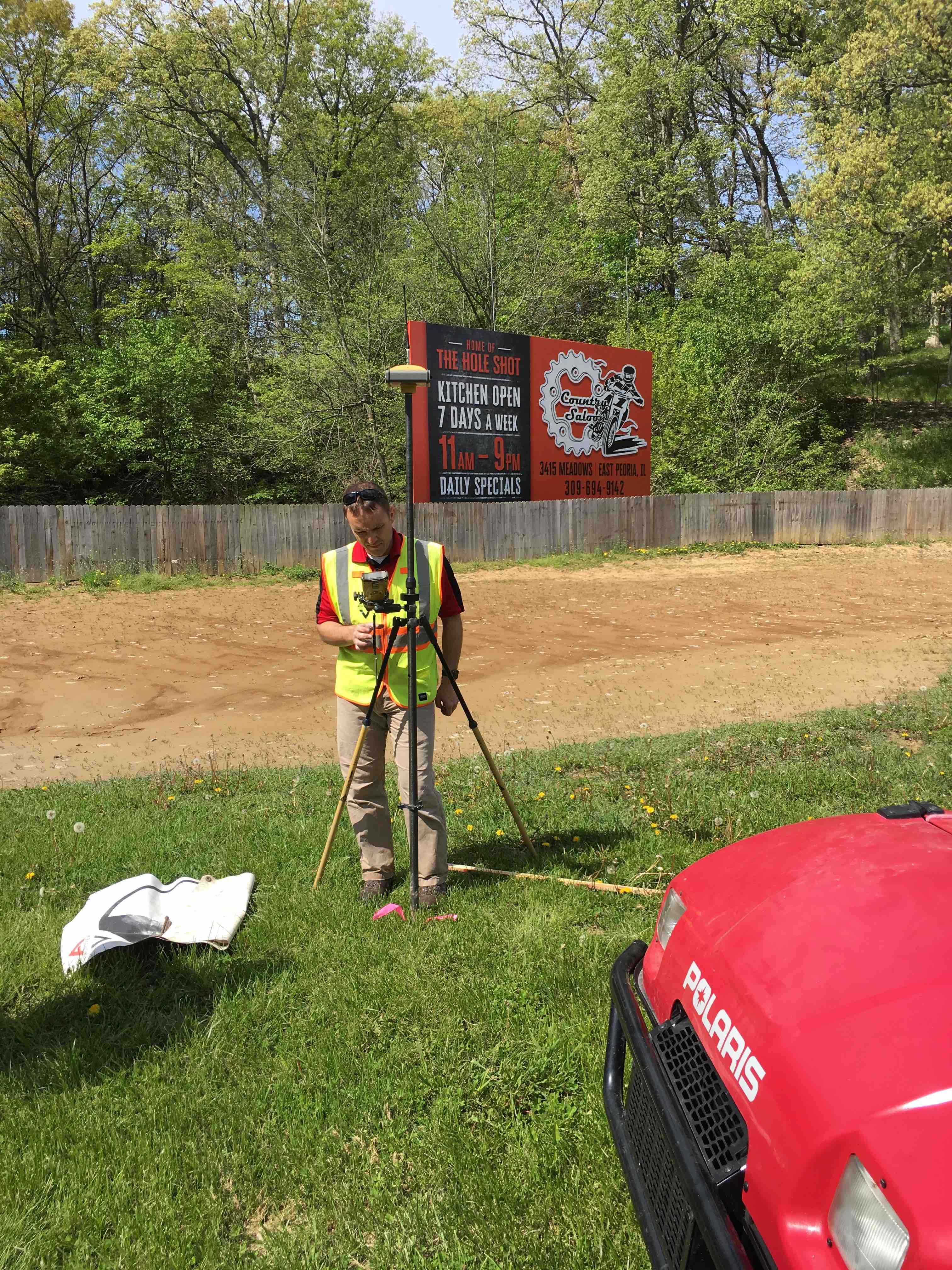 To that end, PMC brought in experts from AeroView Services and Trimble Civil Engineering and Construction, who listened to what the club wanted in a general sense – a low-trajectory but long-flying jump – and then got to work designing the terrain geography to make it all happen. The Trimble folks surveyed the ground, AeroView flew drones overhead to map out the lay of the land, and then each contributed computer maps with the data that would eventually be downloaded into the actual grading machinery that would re-form the terrain.

And the source of those graders and excavation machinery? Caterpillar, of course, the Official Heavy Equipment Provider of American Flat Track as of April, 2019. 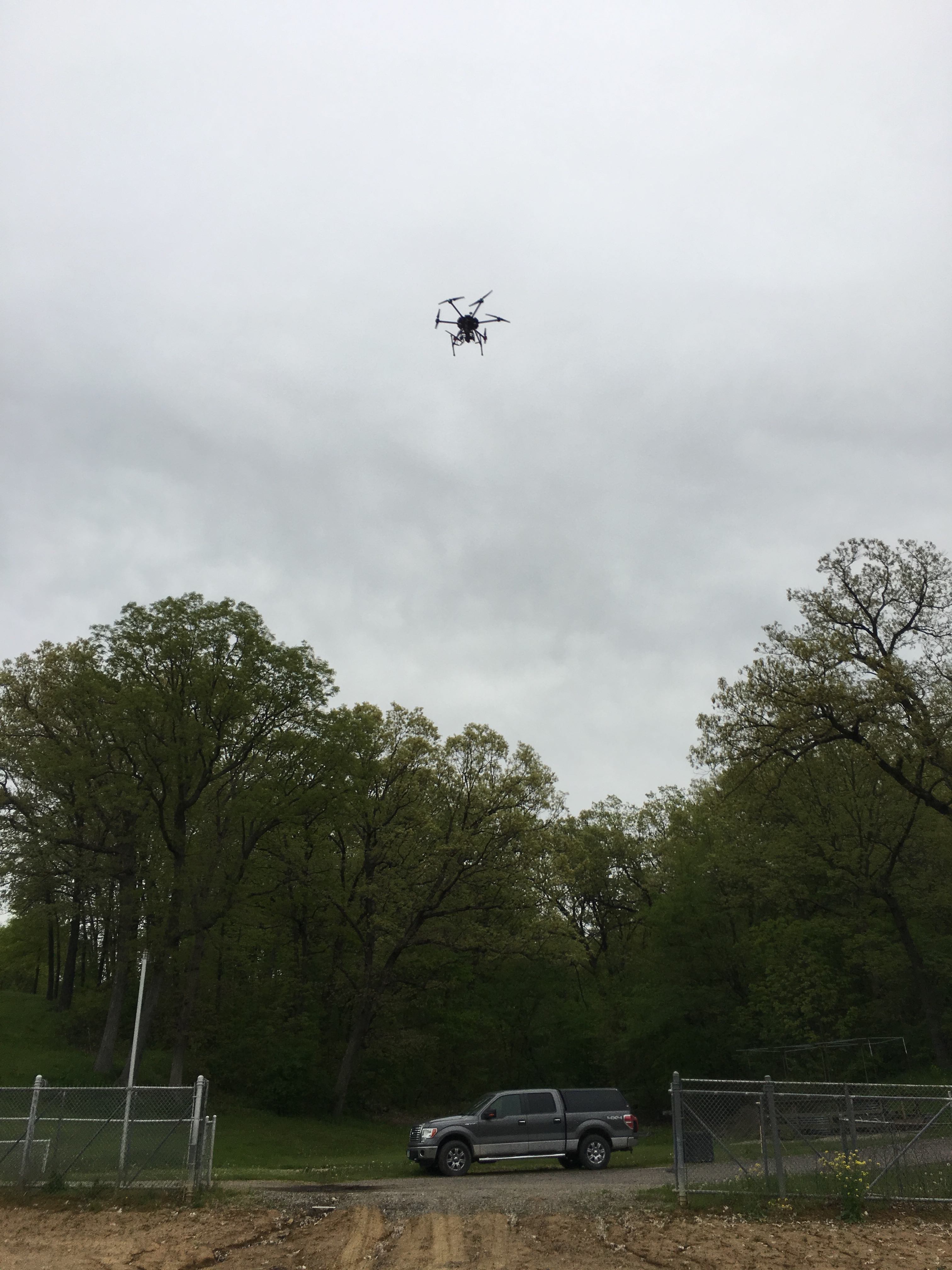 ...and AeroView Services for drone mapping and surveying. The information they gathered was fed into CAT's earth-moving equipment so the design agreed upon would end up seeing reality in real dirt.

“The CAT guys from the Edwards Demonstration team,” remembers Swearinger, “the same guys that saved the day at last year’s race when we had all that rain, were in on this year’s fix, and they did a helluva job. Did it in pretty much one day, too. They worked with the AeroView and Trimble folks and got the calculations and data and map coordinates into the system and into the graders, and from there it was just a matter of shaping and grading the dirt.

A computer-generated illustration of the new jump section, which is not only designed to improve safety and excitement, but help the section drain more effectively after rainfall.

“The jump is now racier,” adds Swearinger, “and we all think it’s safer, too. Ex-AFT pro racer Dustin Crow did some testing for us and found the new section really good. A low trajectory, plenty of distance, and a better, straighter landing. We think the riders will like it much better this coming weekend, and we know the fans will, too. It’s also closer to Turn Two than it was before, which will hopefully keep speeds down a little.” 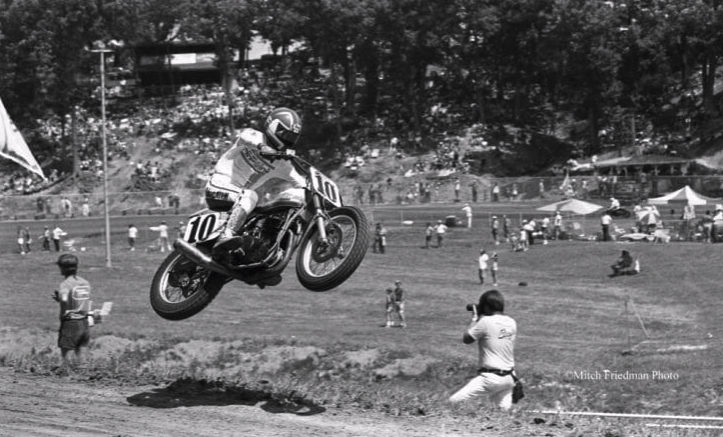 A long and low-trajectory jump is what PMC - and AFT - were after with the new jump design; similar to the one from back in the 1980s. Doug Chandler demonstrates on the factory Honda.

American Flat Track’s partnership with Caterpillar and The Cat Rental Store is bound to pay dividends throughout the season, too. With The Cat Rental Store network offering the largest construction equipment rental fleet in the world, AFT will have access to the full spectrum of the Caterpillar product line at each race, from the company’s well-known earthmoving machines, excavators, skid steer loaders, backhoes, pavers and compactors, work tools and power generators to more than 60 other top-tier brands for aerial work platforms, compressors, concrete, HVAC or dumpers. “Securing this partnership with Caterpillar strengthens our capabilities and will bolster our efforts to deliver the best dirt track racing in the world every weekend,” said Cameron Gray, American Flat Track Events Chief Operating Officer.

Because, after all, every once in a while you need to employ Extreme Measures. 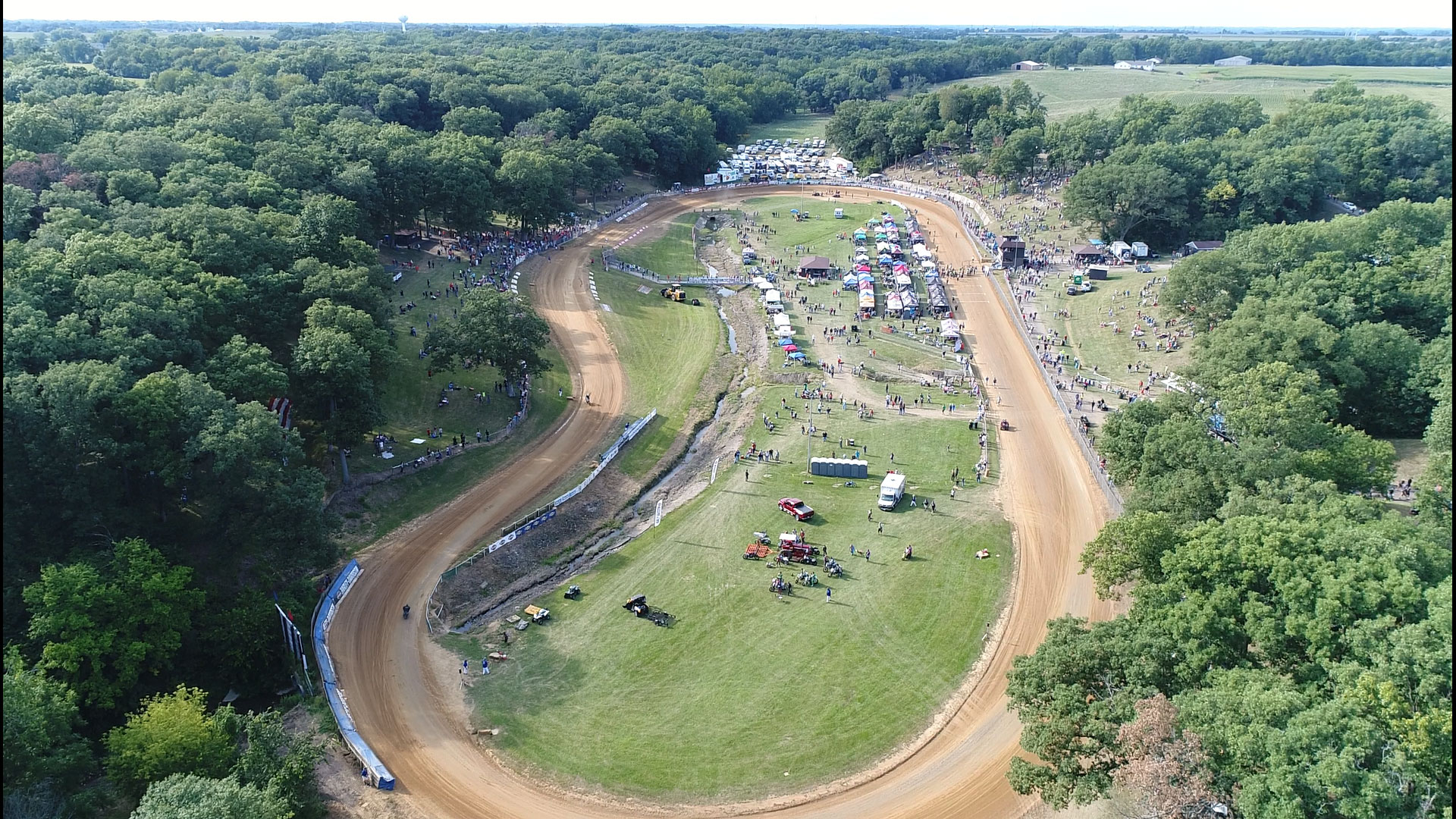 As you can see here, the Peoria TT jump is designed into a slight left-hand bend (with a right-hander just after), which has always made it a tricky and daunting section. 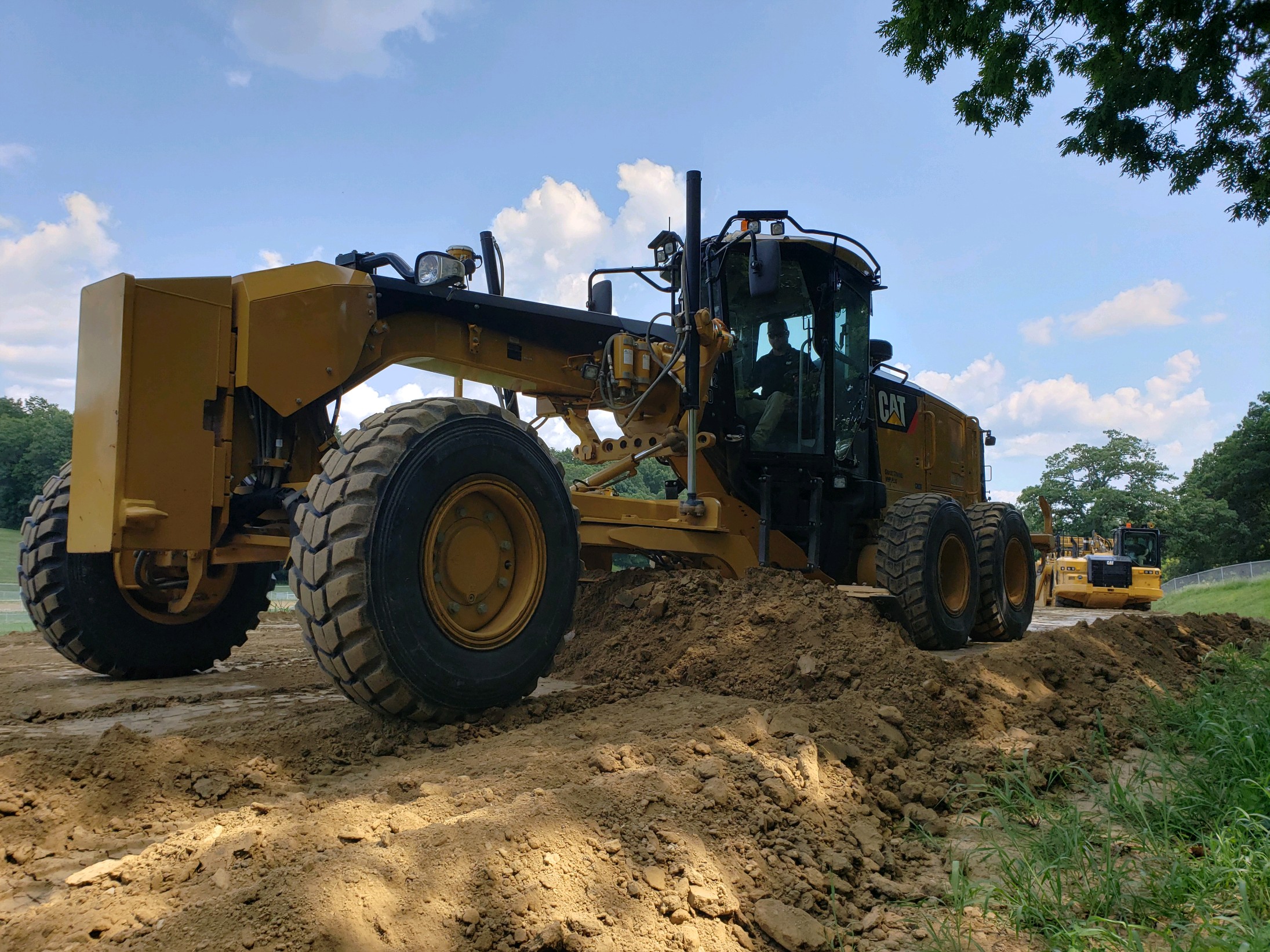 CAT Diesel Power. The words on those millions of hats is obviously more than marketing fluff. And the guys from CAT's Edwards Demonstration Team are the best in the business. 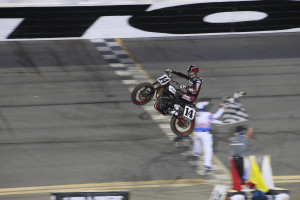