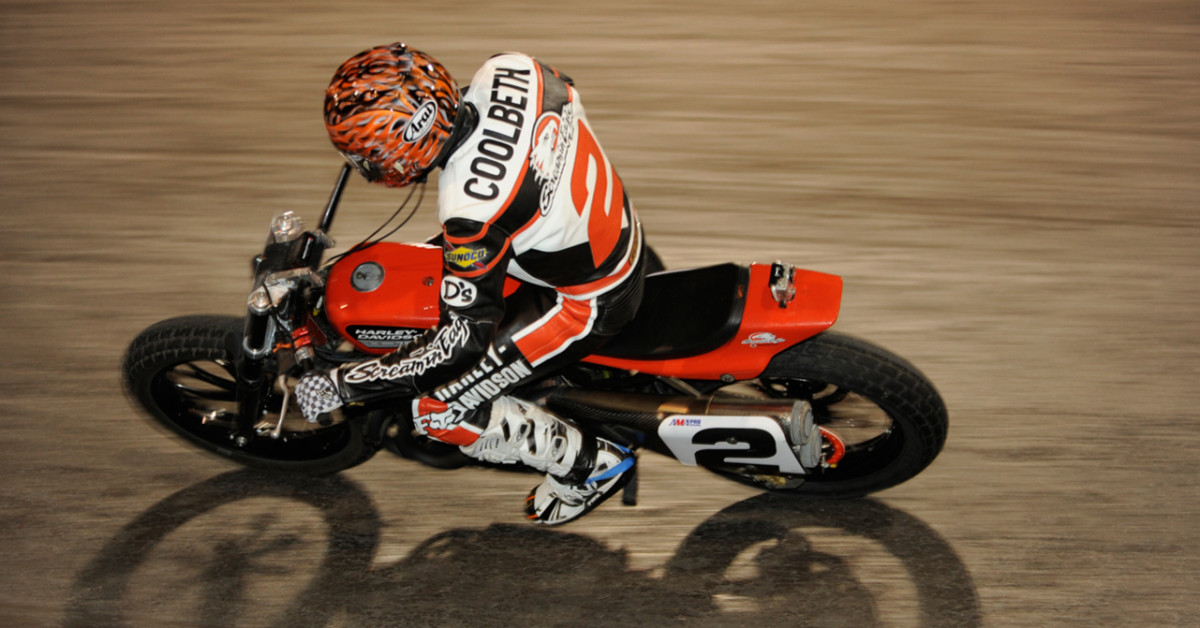 KNOXVILLE, Iowa (September 8, 2012) - Jared Mees (Harley-Davidson/Rogers Racing) saw his huge lead in the point standings diminish on what appeared to be a malfunction on his motorcycle during the 15th lap of Saturday's AMA Pro Harley-Davidson Insurance Grand National Championship presented by Motorcycle-Superstore.com and Lucas Oil main event. It's been a tough season for Kenny Coolbeth Jr. ( Harley-Davidson/Screaming Eagle Harley-Davidson) as a broken leg has caused him to miss much of the 2012 season, but tonight was his night as he claimed the lead on lap five and never gave it up to get the victory.

"It's been a long season," said Coolbeth. "I really haven't been racing a whole lot, but when I do, I always show up to win. Harley-Davidson supplies me with all the best equipment and I owe a large thanks to them. Overall, it was a great effort by my entire team, we are all meshing right now and these boys better get ready."

Coolbeth won by roughly half of a second over Jake Johnson (Harley-Davidson/Zanotti Racing). However, the slim margin can be deceiving as he had to dodge several riders in his final laps, some of whom he was forced to lap.

For most of the race, Johnson and Mees were neck and neck as their battle for second was the best show on the track. Johnson took advantage of Mees' mishap on lap 15 and cruised to a solid second-place finish.

Sammy Halbert (Harley-Davidson/South East Harley) also looked impressive as his solid effort propelled him onto the podium for a third-place finish. Robert Pearson (Kawasaki/Eaken Racing) and Bryan Smith (Harley-Davidson/Crosley Radio) rounded out the top five in what proved to be an exciting night of AMA Pro Flat Track racing in Knoxville, Iowa.

AMA Pro Motorcycle-Superstore.com Pro Singles
Stephen Vanderkuur (Parkinson Brothers Racing/Honda CRF450R) had the fastest bike out of all during the AMA Pro Motorcycle-Superstore.com Pro Singles heat races. The young standout grabbed an early lead with the holeshot off of pole position and looked as if he was on his way to another victory and an increase on his lead in the point standings.

However, Shayna Texter (DFW Honda/Honda CRF450R) had other plans as she stole the lead from Vanderkuur on lap five and never looked back, increasing her lead each lap and surrendering nothing to the men at the back of the pack. Texter was the clear-cut victor as she crossed the finish line almost two full seconds in front of second-place finisher Jake Cunningham (Shillers Tree Service/Honda CRF450R).

Vanderkuur finished a close third to round out the podium with Jake Shoemaker (Montgomeryville Cycle Center/Honda CRF450R) and Wyatt Macguire (Kirland Racing/Yamaha YZ-450F) closing out the top five, respectively.

"Last year was a different experience, having to battle from beginning to end," said Shayna Texter.

"These guys didn't make it easy on me. All these guys out here are competitors on the track but racing aside we make up a good family. If you're not part of the dirt track community then you just wouldn't understand."