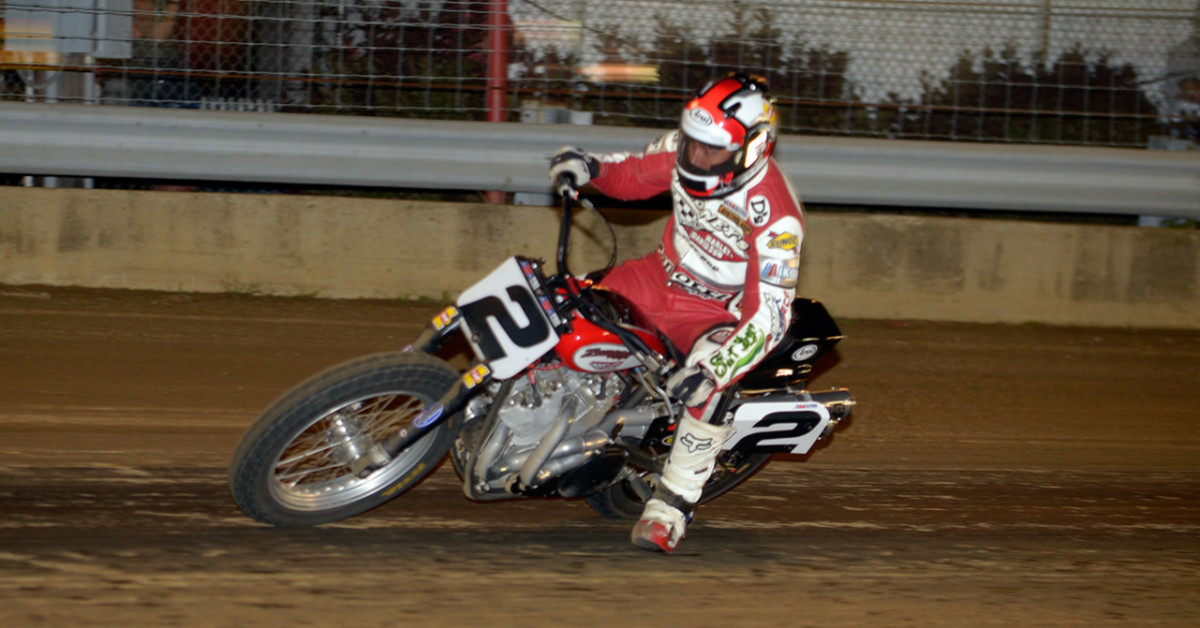 INDIANAPOLIS (Aug. 8, 2014) - Kenny Coolbeth ripped the lead from Jake Johnson on lap four of Friday night's Indy Mile at the Indiana State Fairgrounds and went on to win his 32nd AMA Pro Flat Track Grand National Championship main event aboard his Zanotti Racing Harley-Davidson. Coolbeth's 2.470-second win margin turned heads, to say the least, as he was able to outgun the usual Kawasaki frontrunners, specifically Bryan Smith, to earn his third win of the season.

"This is great for us," said Coolbeth. "I feel so comfortable with my bike and my team right now. They are putting so much effort into my program every single day and it feels so good for it to pay off here tonight. Smith has the whole package, there is no denying that, but tonight we had it."

Coolbeth started on the pole but got off to a mediocre start, falling all the way back to fourth after the completion of lap one. On the second lap, however, Coolbeth found his groove and the No. 2 slot. On lap four, Coolbeth was able to get an angle on his rival, Johnson, and gain the lead for his first and final time of the night. Once in front, Coolbeth was able to check out and create enough space to ride smoothly to victory.

As easy as Coolbeth's victory looked, the battle for the next four slots was a tight one. In the end, it was Smith, aboard his Villa-Esparza/Crosley Radio Kawasaki who earned second place. To everyone's surprise, Smith was riding as far back as sixth at one point. It wasn't until lap 16 when he appeared to turn on the jets, as he passed Jared Mees to take over the second spot. Smith would go on to forfeit his position to Mees on the last lap only to retake it from him down the final frontstretch.

Mees' third place finish aboard his Rogers Racing Harley-Davidson was his ninth top five finish out of the 10 AMA Pro Flat Track rounds, and his consistency has him atop the overall point standings heading in to the latter half of 2014.

Jake Johnson, aboard his Ramspur Winery Ducati, and Brad Baker, aboard his Factory Harley-Davidson, rounded out the top five, respectfully.

Jarod Vanderkooi ended a demanding span of three race dates in seven days in the best way possible. The pilot of the 17F Johnny's Vintage Motorcycle Honda won the famed Indy Mile, using a last-lap draft pass to get by runner-up Kyle Johnson in a finish that was so close, the timing screens showed it as a dead heat.

It's the third win of the season for Vanderkooi, and his second in Pro Singles competition - his other was on a twin at the Springfield Mile. After so much time on the road, the event also served as a homecoming for the Mt. Gilead, Ohio, rider. On Aug. 2, AMA Pro Flat Track held the Castle Rock TT, then went to Black Hills Speedway in South Dakota for an event that was washed out by Mother Nature on Aug. 5, before ending the trek in Indianapolis.

"All my friends and family are here, I'm about three hours from home," Vanderkooi said. "Everybody came out, my uncles, aunts, everybody. And it's the legendary Indy Mile, it's awesome.

"It was a long time on the road, about 7,000 miles. It's all worth it now."
Johnson, on his 77J Parkinson Brothers Honda, led coming off the final corner, but that's just how Vanderkooi wanted it.

"I wanted to go into Turn 3 in second place and hopefully draft by him on the way," Vanderkooi said. "I went on the low side of him, got the draft, and he kind of cut down to try to break the draft."
Johnson was able to hold off a similar move just weeks ago at the Sacramento Mile, where he took the checkered flag, but he still wasn't comfortable leading off Turn 4.

"We didn't want to lead off of 4," Johnson said. "Vanderkooi was smart, he didn't draft me on the backstretch. He played a smart race. ... He was able to draft me in the frontstrech and barely take that win."

Johnson retook the points lead (146-142) over Davis Fisher, who went down on the final lap on his 67M T.J. Burnett Farms Honda.

"We're four points in the lead now, hopefully we can get a couple more wins this season and come away with this points championship," Johnson said.

Nick Armstrong rounded out the podium on his No. 44E Southland Racing Honda. It's his second top three finish in the last three events, and it was special because of the lure of the race.

"Especially here at Indy, this was a big race, this is awesome," Armstrong said.

Next Up
The stars of AMA Pro Flat Track will head to Peoria, Ill. for the Peoria TT at Peoria Race Park on August 17, 2014. Footage of the Indy Mile will be available to view on AMA Pro Racing's YouTube portal at www.youtube.com/amaprovids shortly.