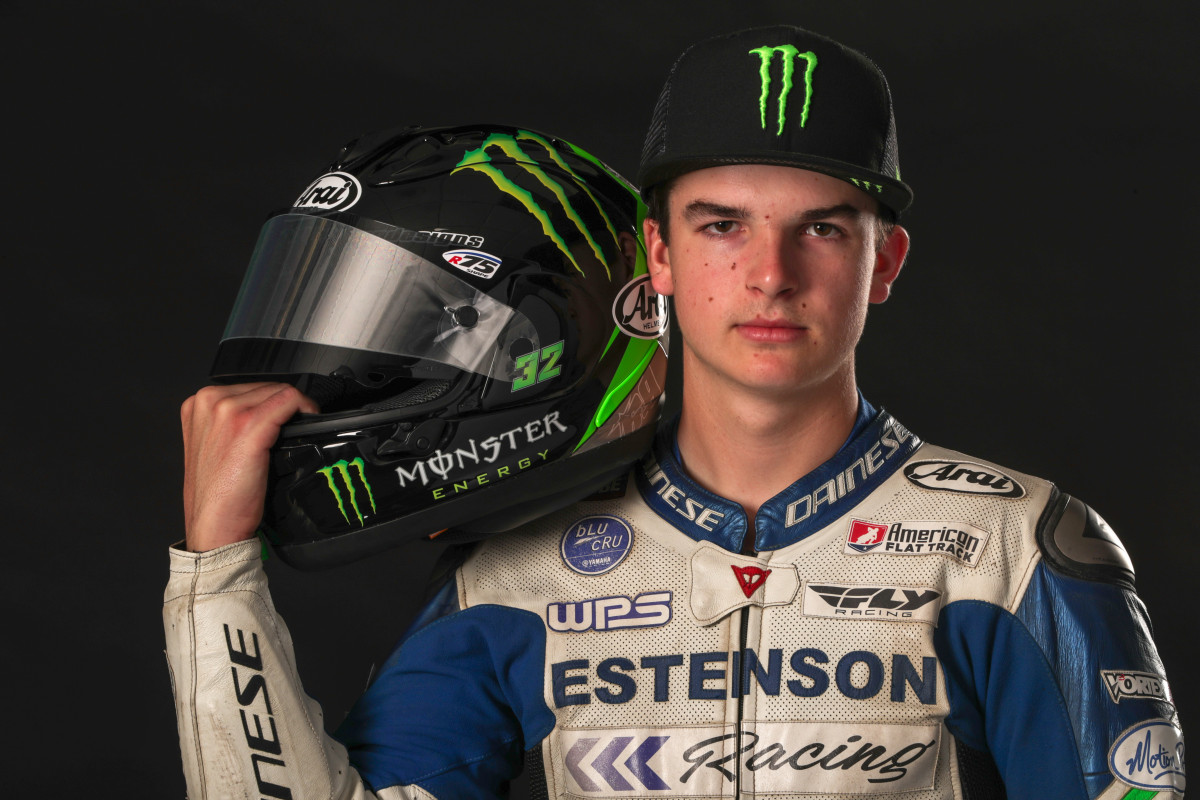 Everyone who followed the 2020 Progressive American Flat Track season already understands that the decisive moment of Dallas Daniels’ successful 2020 AFT Singles presented by Russ Brown Motorcycle Attorneys title campaign came early. What everyone may not understand is just how early.

While Daniels’ final-lap pass in Charlotte that extended his win streak to six did in fact lock up the class crown with three races still remaining on the calendar, the most critical Main Event of the season was its very first -- the one he failed to even make.

Arriving in Volusia for the season opener, Daniels was at the eye of a hurricane of hype after he took the championship by storm as a 16-year-old sensation in 2019.

There, the Estenson Racing prodigy promptly had the wind knocked out of his sails. 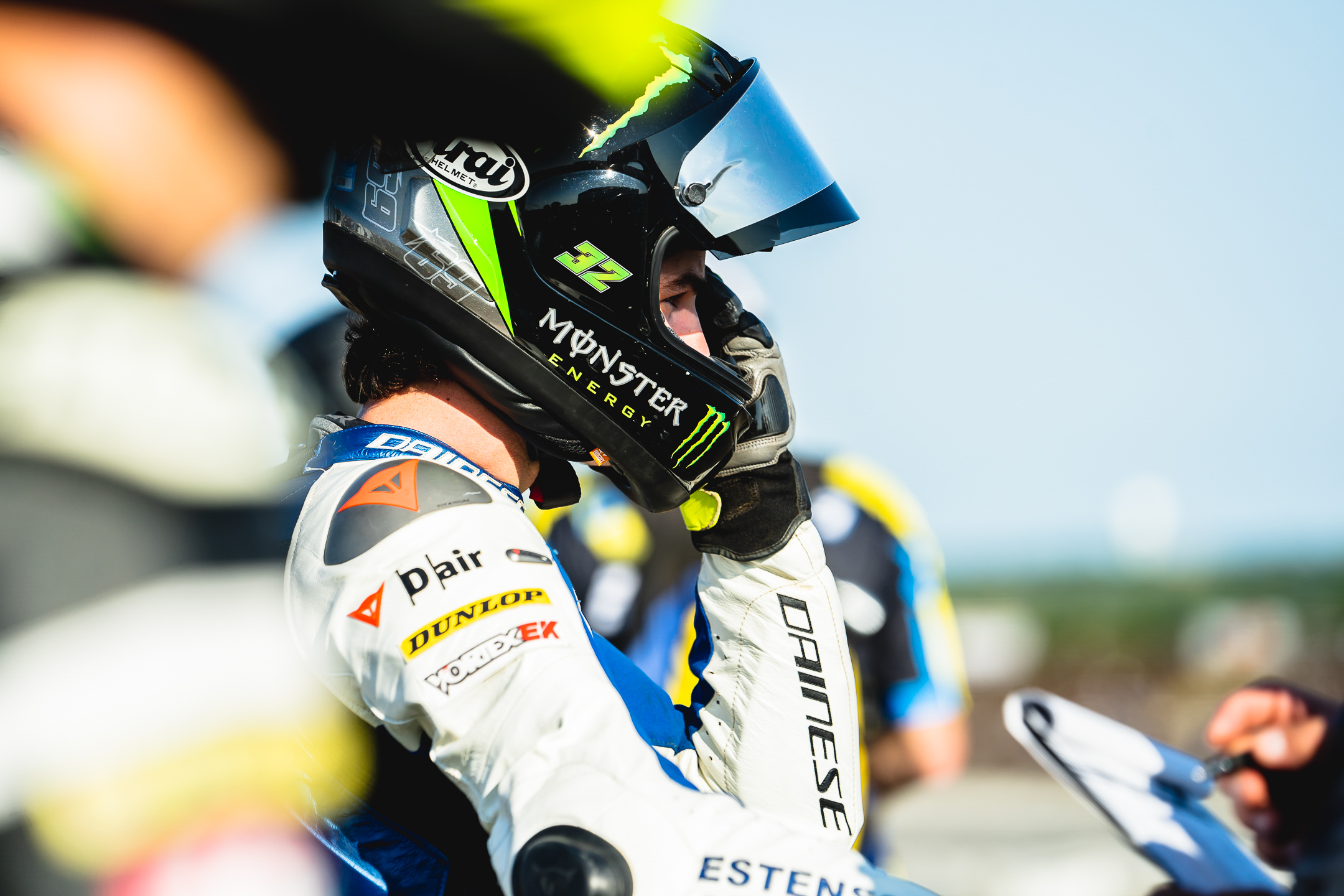 While several of his fellow preseason title favorites finished inside the top five that Friday night, Daniels watched from the fences. Early that evening, he’d suffered a crushing defeat in the Semi that he expected to win but instead ended up tenth and, as a result, on the outside looking in.

Most riders would try to brush it off or look for external sources of blame and then seek a better set-up or improved lines for the following day. Instead, Daniels’ Friday evening was spent soul-searching.

“That night I was like, ‘Man, should I even be out here doing this? Am I meant to be a racer? Was last year just a fluke?’

“My mindset was just wrong.”

That night, Daniels challenged the rider who had the potential to be his biggest threat for the championship -- himself -- and he won. He came back following that massive disappointment and erased all but the lessons learned with an epic triumph by 0.020 seconds over Shanya Texter, the winningest rider in AFT Singles history (along with six more riders who also took the checkered flag within a second of the victory). 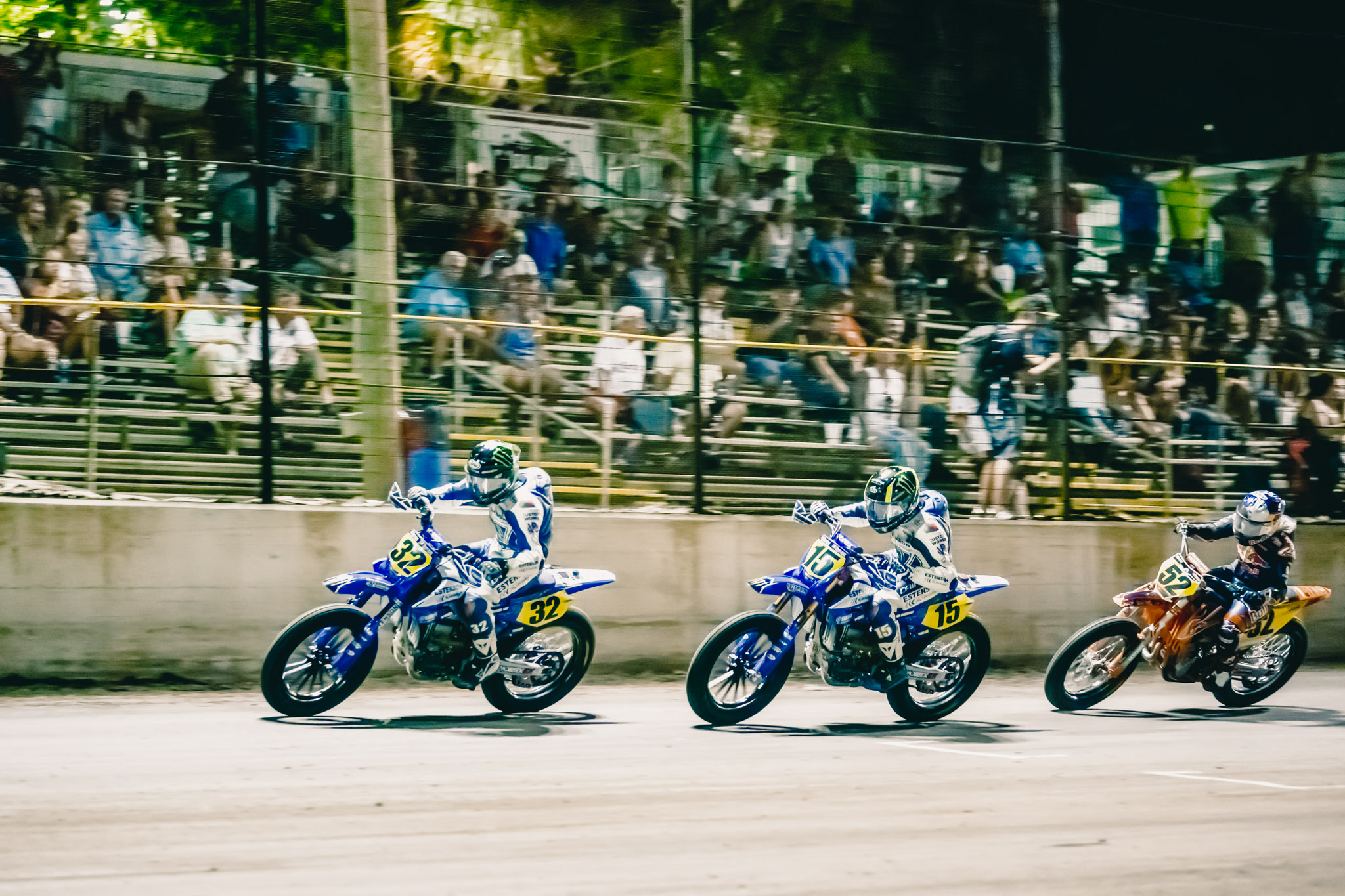 Immediately afterward, Daniels said, “We’ve got our work cut out for us now, but we’re going to make a fight for this championship -- I think we showed that tonight.”

Now looking back on that night, he said, “I wanted to prove to everybody that I didn't get lucky last year, winning a race and getting Rookie of the Year. I wanted to prove that I can be one of the frontrunners. So to come out and prove to everybody that I still have the speed -- and prove that it doesn't matter what happens in prior races, I can put it behind me and win -- it was a huge deal.”

The single most important person included in the aforementioned “everybody” was unquestionably himself.

“Honestly, I think (not making the Main in the opener) was one of the best things for my career in a sense. I learned how to deal with bad days really quickly.”

As it turned out, Daniels didn’t make a fight of the championship; he turned it into a TKO.

The AFT Singles class is rightly celebrated for its depth, parity and unpredictability. Each successive season, the class is seemingly even more loaded with a field lined with potential race winners mounted aboard evenly matched motorcycles. Since taking on its current form in 2017, every season has featured anywhere from eight to ten different winners with the class champion claiming as many as four, and as few as zero, victories.

However, Daniels crushed the class designed to be nearly domination-proof in 2020. With just 15 races to work with (14 if you remove the Volusia opener) he racked up an astonishing eight wins, including six straight, while being pursued by a desperate pack who did everything humanly possible to stop him.

Still, it wasn’t until the season’s mid-point that Daniels felt like he was truly “the guy.” 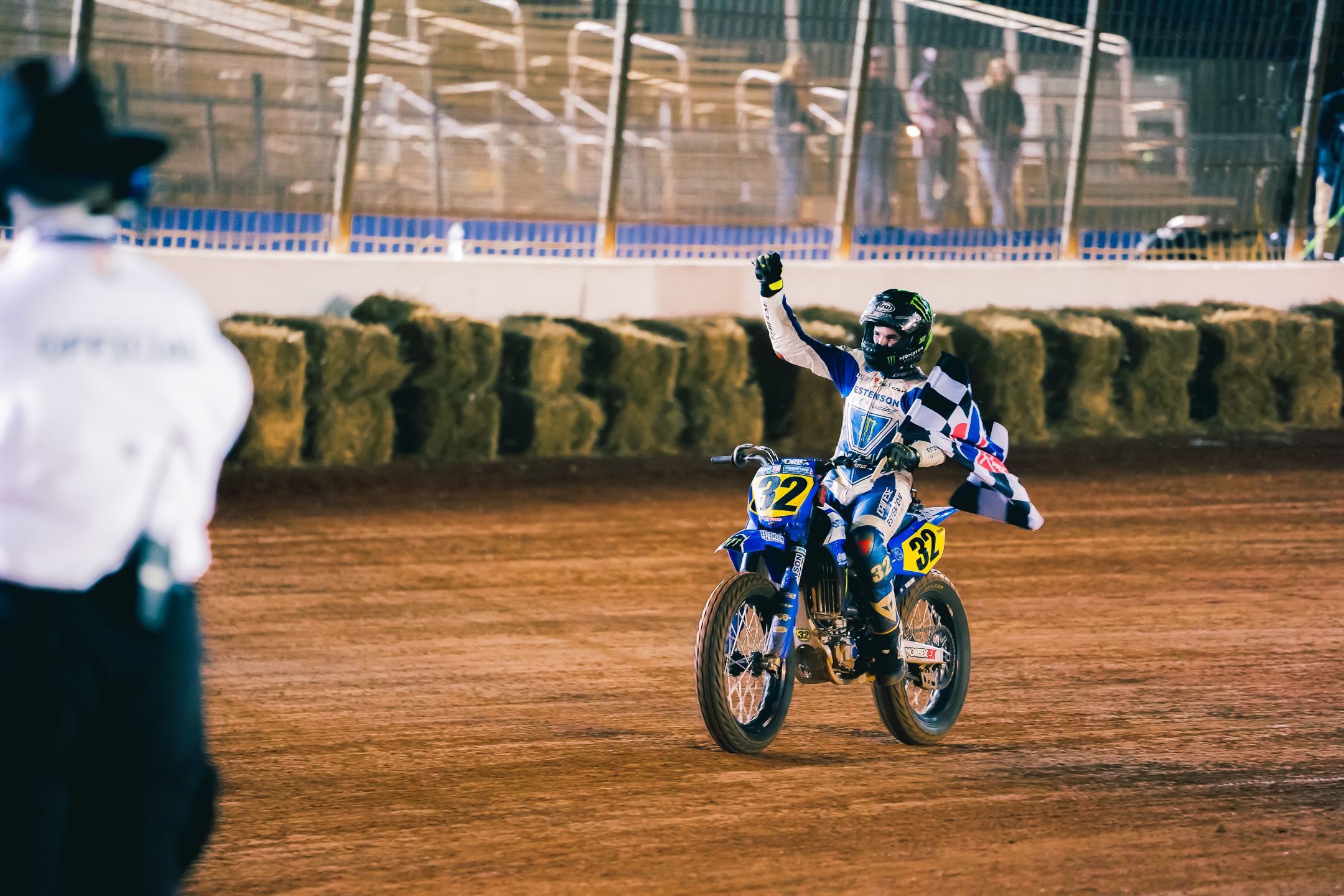 He explained, “When I won at Springfield and became the first rider to win two races on the season, yeah, I was excited to win, but I sort of lucked into that race with Mikey (Rush) falling down. He was pulling away, so it was kind of like we're still not quite there yet.

“But when we went to Williams Grove, I was by far one of the fastest guys both days. And then I was able to go on that streak of six in a row, weekend after weekend. At Dallas, I had some dominating races -- I didn't think I'd be able to win any race by that much this season. 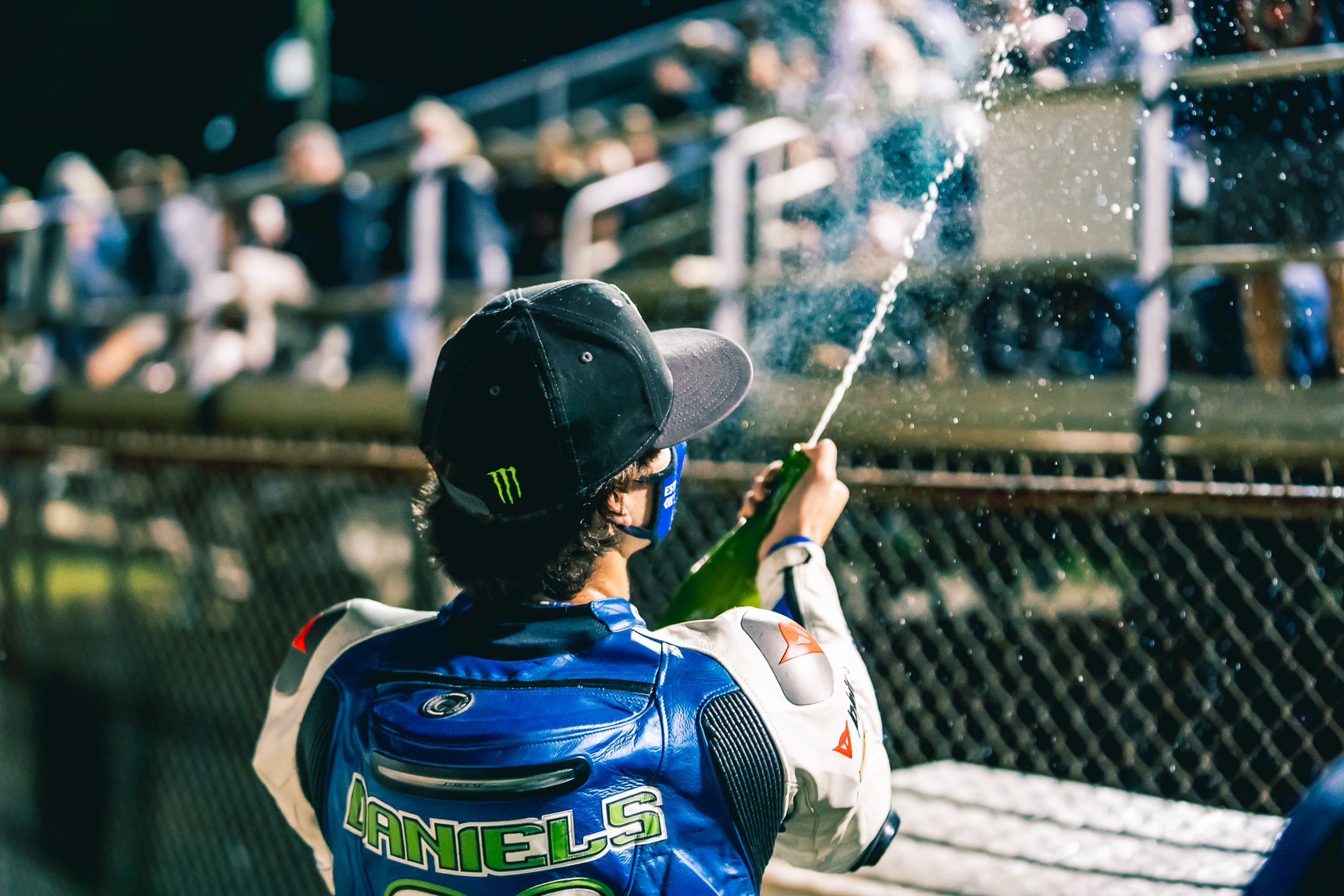 “And then somehow to be able to come from second to edge (Morgen) Mischler on the last lap in Atlanta and Charlotte? I'd never been in that position before, so to be able to that was a big surprise for me and the team.” 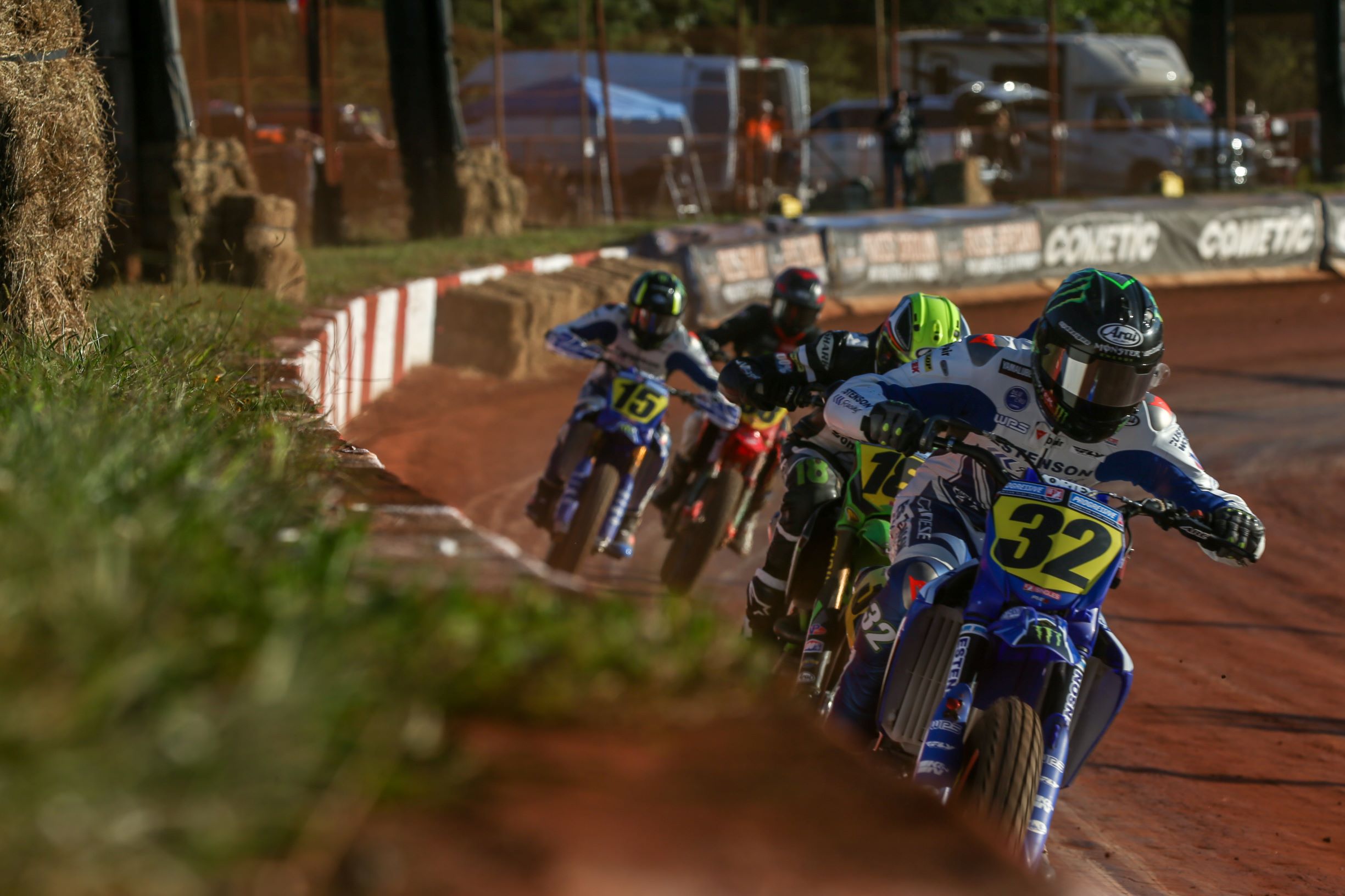 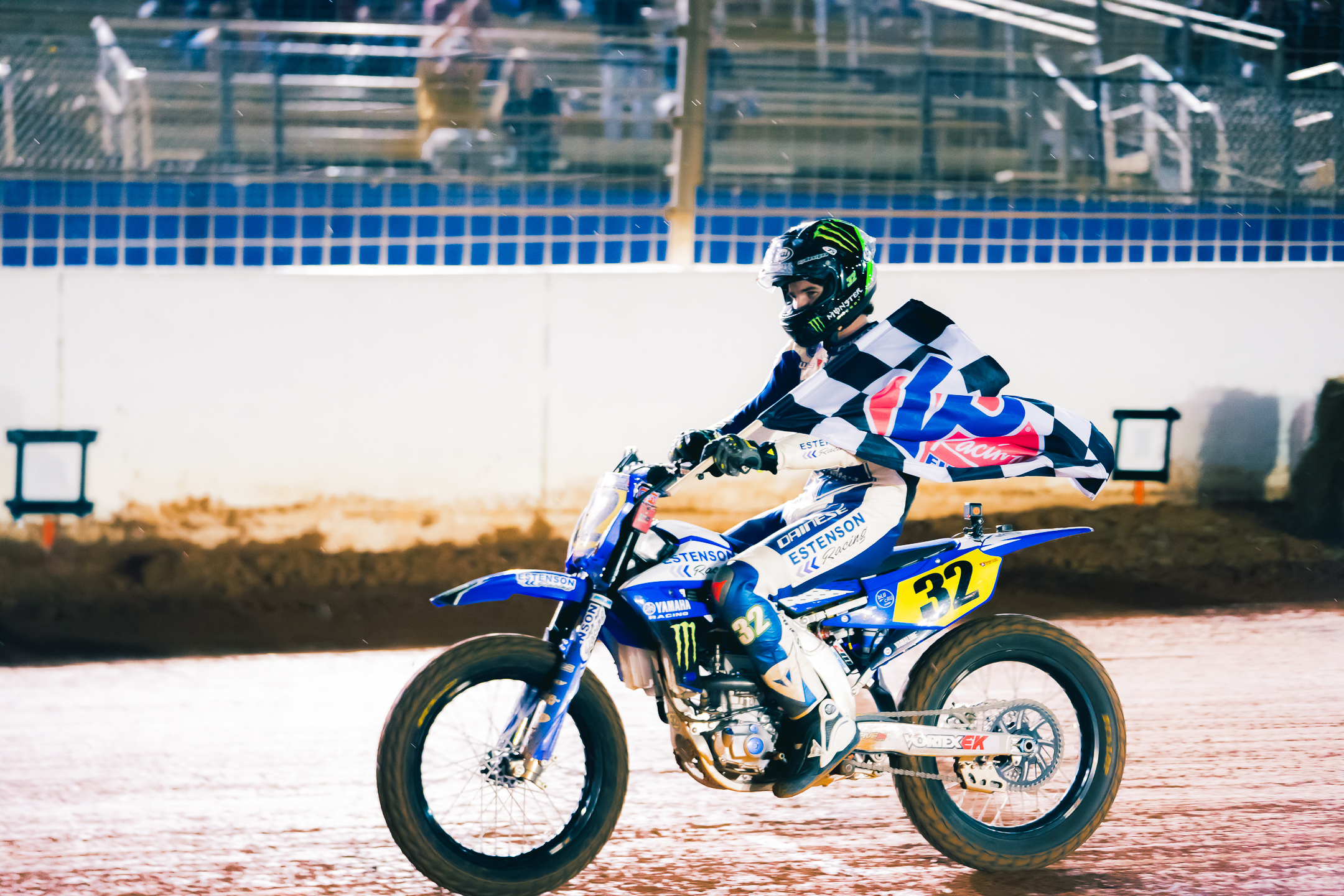 As Daniels’ against-all-odds win streak stacked higher and higher, rather than feel the pressure to keep it rolling mount, he felt it evaporate. Better yet, he felt it move behind him and weigh down his competition instead.

“I don't think getting on that streak built up more pressure on me. I think, if anything, as I was getting more of a points lead and realizing I could win races, it made me more relaxed. I knew that I could do it because I had been doing it. And I feel like when I'm relaxed, I ride even better. 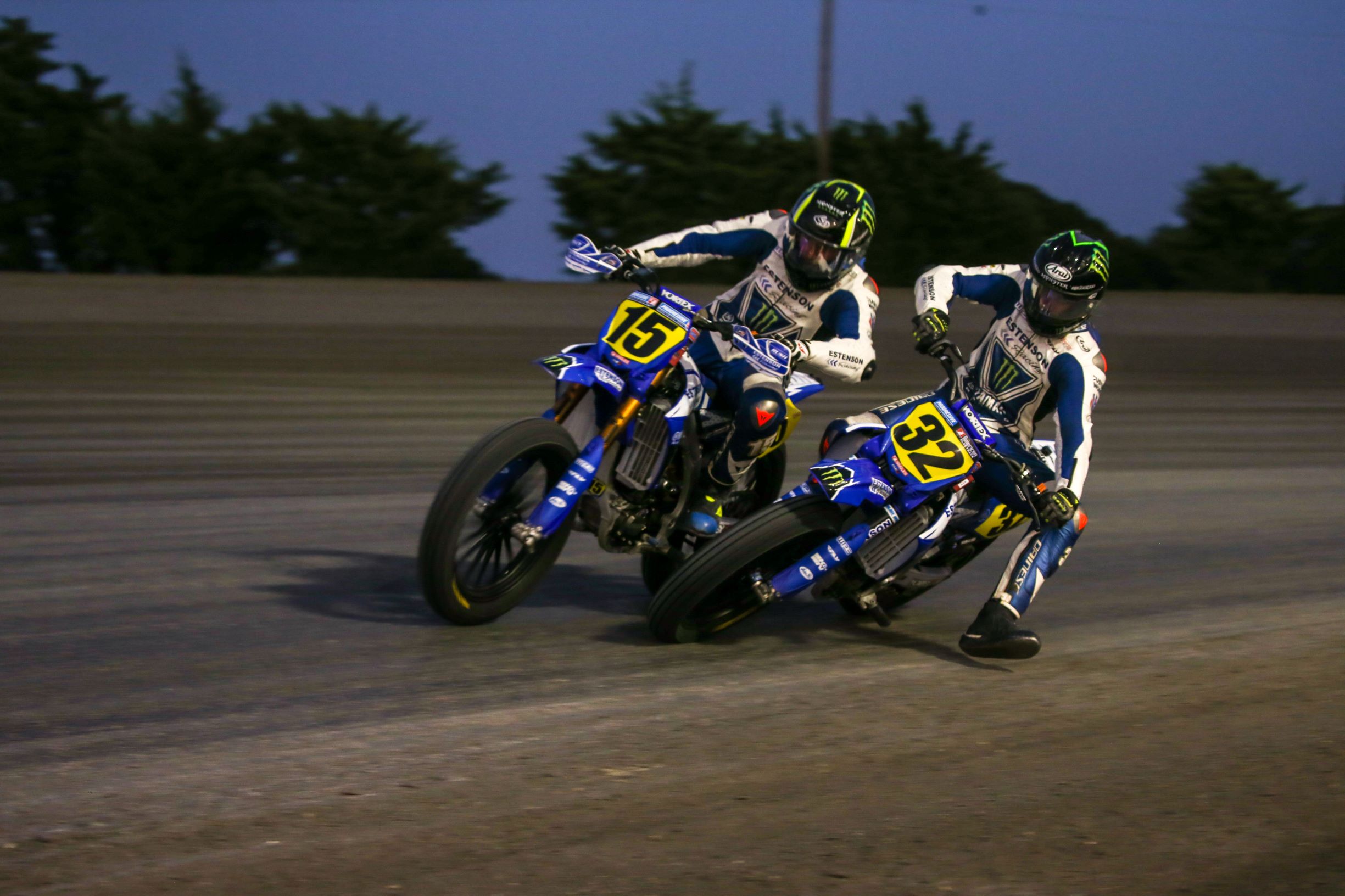 “Honestly, I think the pressure was on the other guys to try to stop what I was doing because I was sort of running away with it.” 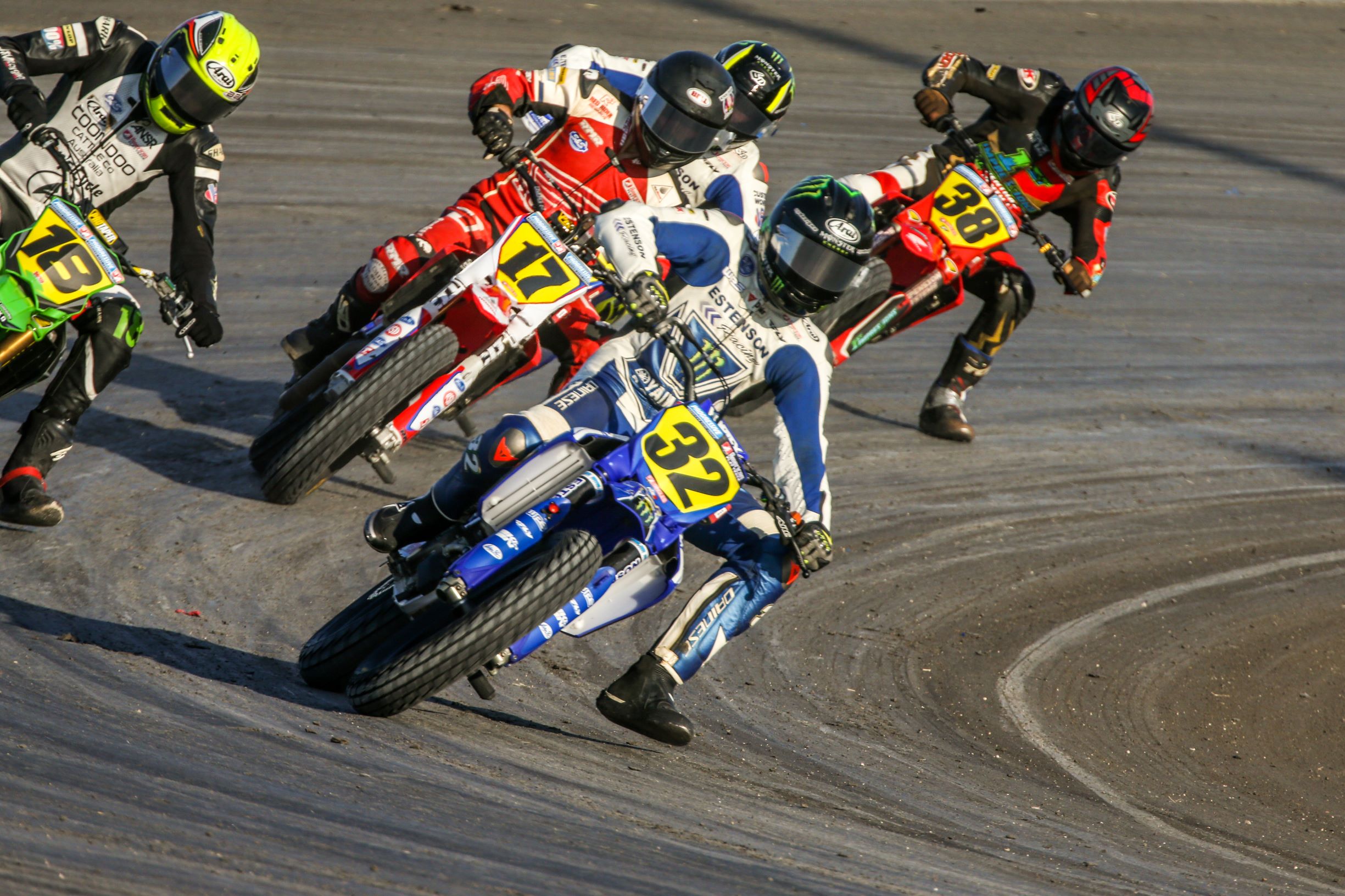 Ultimately, he did run away with it. And he never looked back, not even after the championship was sealed.

An AFT Singles title is a career achievement for any number of outstanding competitors -- an achievement many more certified flat track stars never accomplish. But once it was in the bag, Daniels spared only a few seconds of his post-race interview celebrating on the biggest milestone of his career to date before firmly re-fixing his focus on his ultimate career goal -- the Grand National Championship(s). 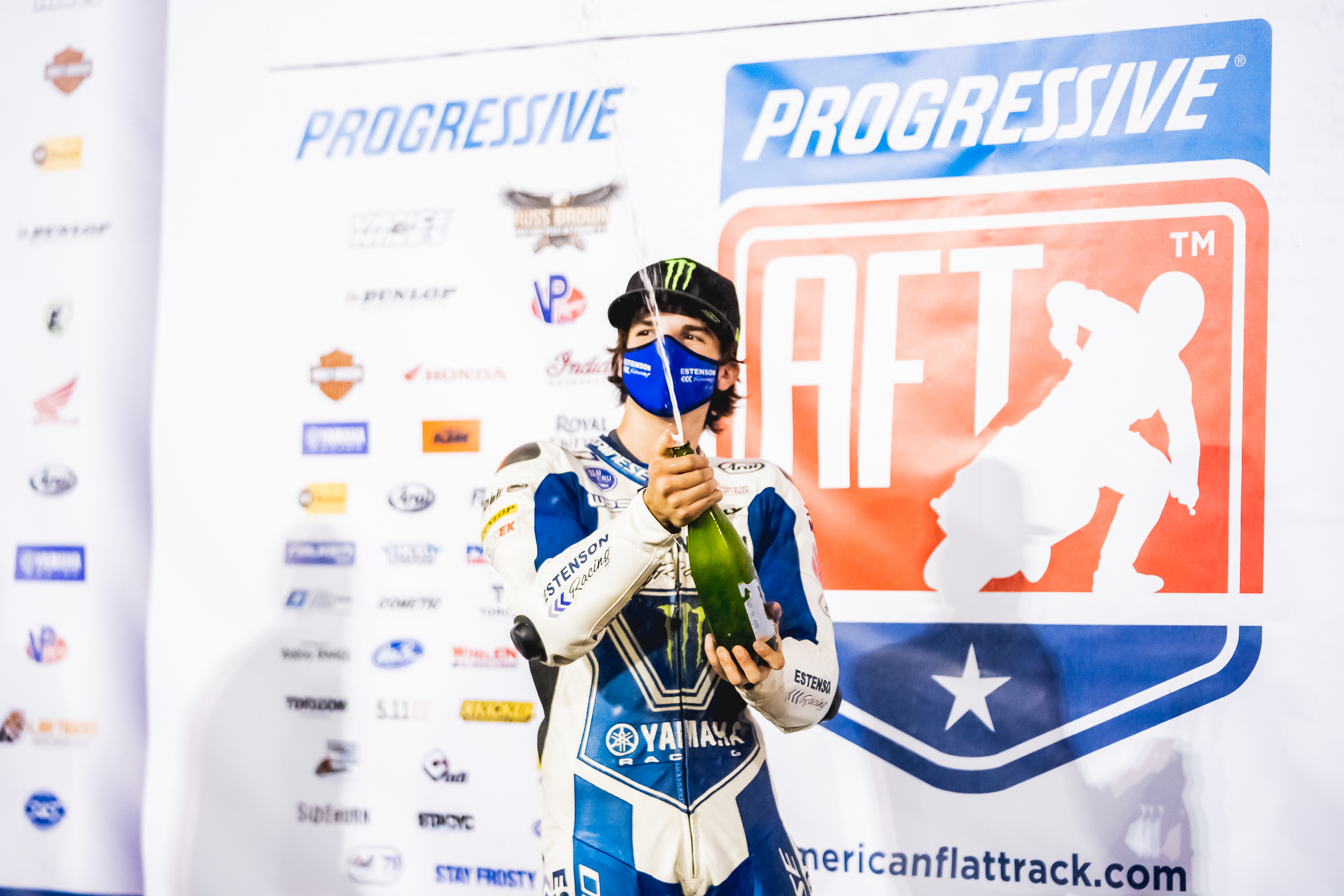 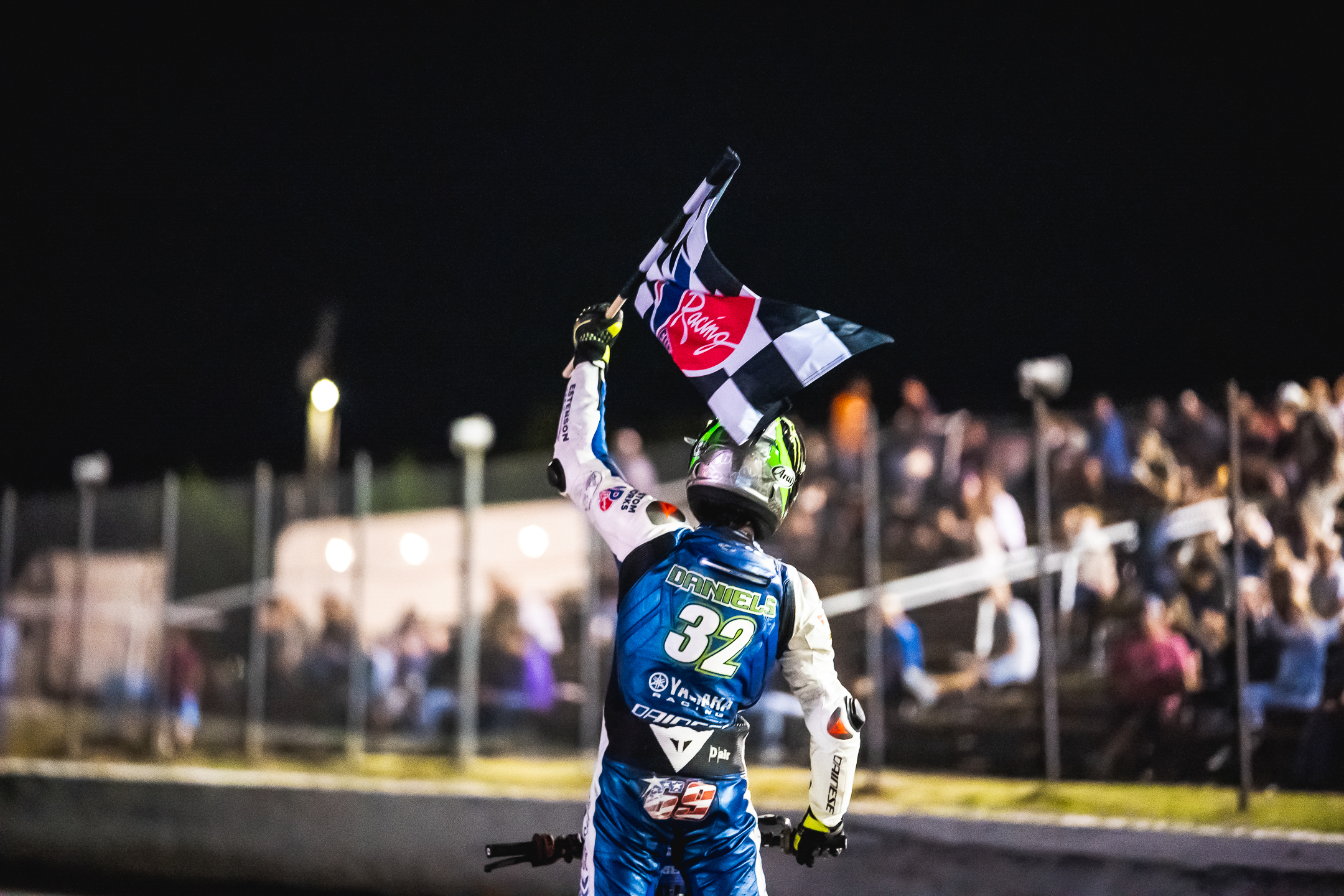 “I don't say it to be cocky; those are just the goals I have. If you don't set goals, you'll never reach them. Obviously, that’s not going to be easy because the records are set at some unbelievable heights that are hard to get to. But there's no reason why you can't think you can.”

Interestingly, Daniels is now a Singles rider with nothing left to prove and yet nowhere to go (at least for now). He won’t be 18, and thus eligible to ride a Twin, until midway into the 2021 season.

As a result, he’ll open his ‘21 campaign back on his Estenson Racing YZ450F with the goal of defending his title. And after his 18th birthday, he’ll begin performing double duty for the squad while cutting his teeth aboard Estenson Racing’s Yamaha MT-07 AFT Production Twins racer.

“It is kind of an odd situation. But I'm just going to try to win back-to-back AFT Singles championships. And, while I don't think it'll be possible to win the AFT Production Twins championship in only half a year, I want to win some races. And then my future is still to be decided after that.”

Daniels’ seat time on a twin-cylinder flat track machine is extremely limited to date. He explained, “About four or five years ago, I rode a twin. It was one my crew chief, James Hart, built when he was running his old team. I was able to ride that once for like a practice session. So, I’ve never really ridden one.

“I think I'll be able to ride the Yamaha (twin) some this winter and be able to test before I race it. I'm looking forward to that.”

It can safely be assumed the anticipation to his entrance to the AFT Production Twins ranks will be similar to the advance hype he received in 2019 as the flat track world looked forward to his professional debut in the AFT Singles class.

Some of that unusual level of attention Daniels received prior to hitting the professional scene was due to the reputation he earned as the first and only amateur to ever win the Nicky Hayden AMA Horizon Award in both flat track and roadracing.

He proved himself worthy of that double honor by claiming his first MotoAmerica and Progressive AFT race wins in 2019. However, he pushed his roadracing aspirations to the side in 2020 to stay glued to the pathway he hopes will someday make him a multi-time Grand National Champion, and it’s very possible that’s where they will remain.

“The pandemic didn't make it any easier,” he said of any potential roadracing outings in 2020. “But honestly, I think I pretty much had the plan at the beginning of this year to just try to focus on winning my dirt track championship and put everything into that.

“I think in the future, I would like to get on a Twins Cup bike or a 600 at some of the races. But the hard thing is most of the rounds conflict. And I’m not a big fan of trying to race during the season, even if it's on an off weekend. It'd have to be after the season.

“So it's hard to say if I'll be able to roadrace in the future or not. I know where I want my dirt track career to go, and I'm going to do everything I can to take it where I want to go. If I'm never able to roadrace professionally for the rest of my career, that's not a huge deal for me.

“I know when I'm done racing and I'm just sitting around doing other stuff, I'll have a track day bike or something. I'll always roadrace and motocross and flat track and stuff like that. I'm never going to quit roadracing -- I'll always do that -- but I just may not be able to do it professionally.”

That doesn’t completely erase the possibility of Daniels someday winning national championships in more than one racing discipline in a single season. In fact, it could happen as early as this year.

When asked how long he was going to allow himself to enjoy his success this season before starting to grind toward 2021, Daniels explained that he’s only a couple weeks out from taking a shot at the 2020 AMA Supermoto National Championship -- in this case, thanks to the pandemic.

“I'm enjoying it a little bit this week. All my buddies and my dad's buddies, we have an annual pit bike race around our town. We're going to have some fun there and just ride pit bikes with our friends and celebrate a little bit.

“But I'm doing the AMA Supermoto Championship in early November. Their season plans got all messed up with COVID-19, so they're doing two days of racing with two races each day to crown the champion in all their classes. I'm going to go try to win the #1 plate. 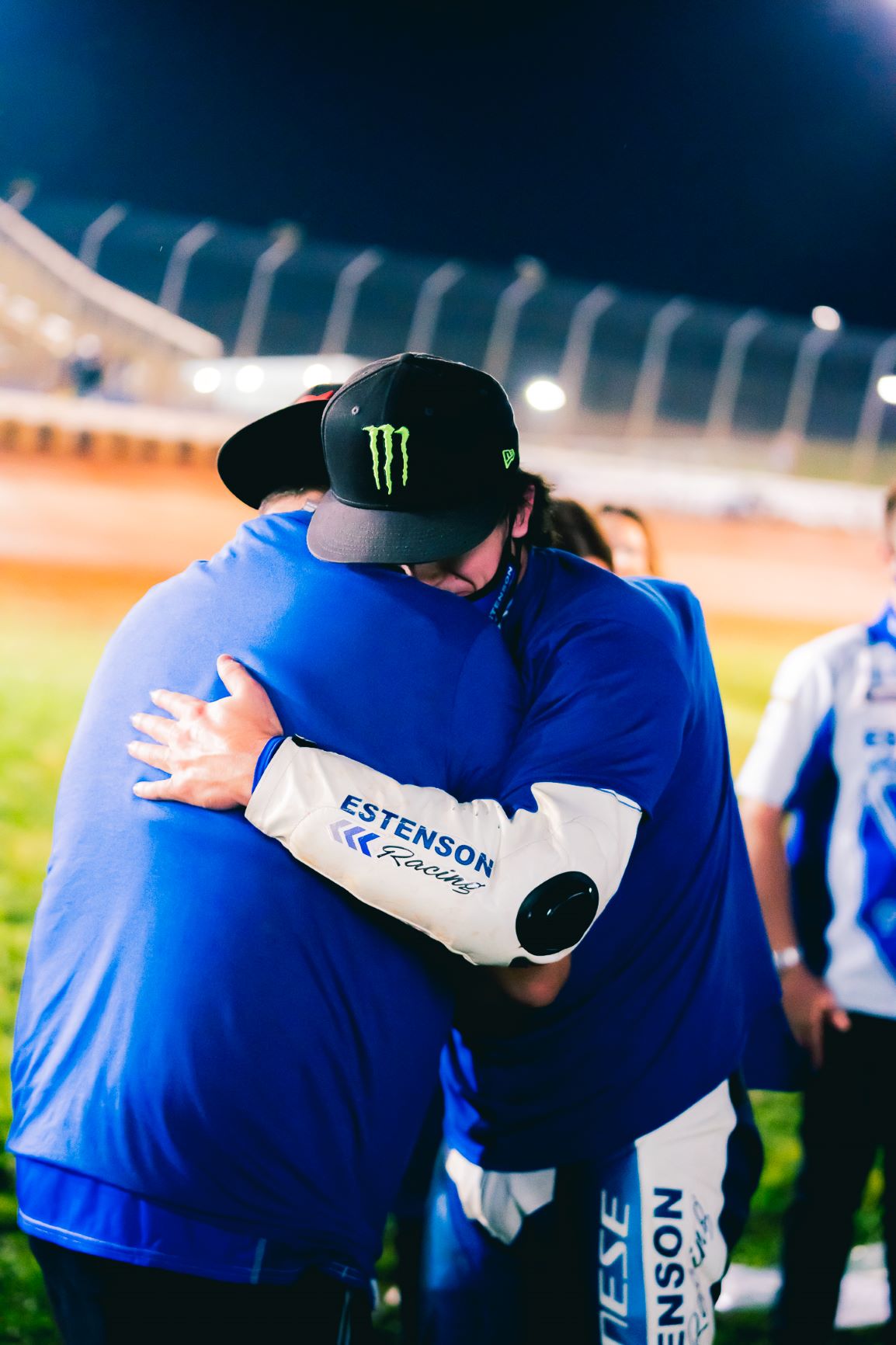 “So I really don't have any time to rest. I'm going to train for that, and pretty much as soon as I'm done, I'm going to be in training and testing for next year.

“Like I said, I've been taking a little time off this week to just try to enjoy it a little bit, but I'm already feeling ready to get back to work for next year.” 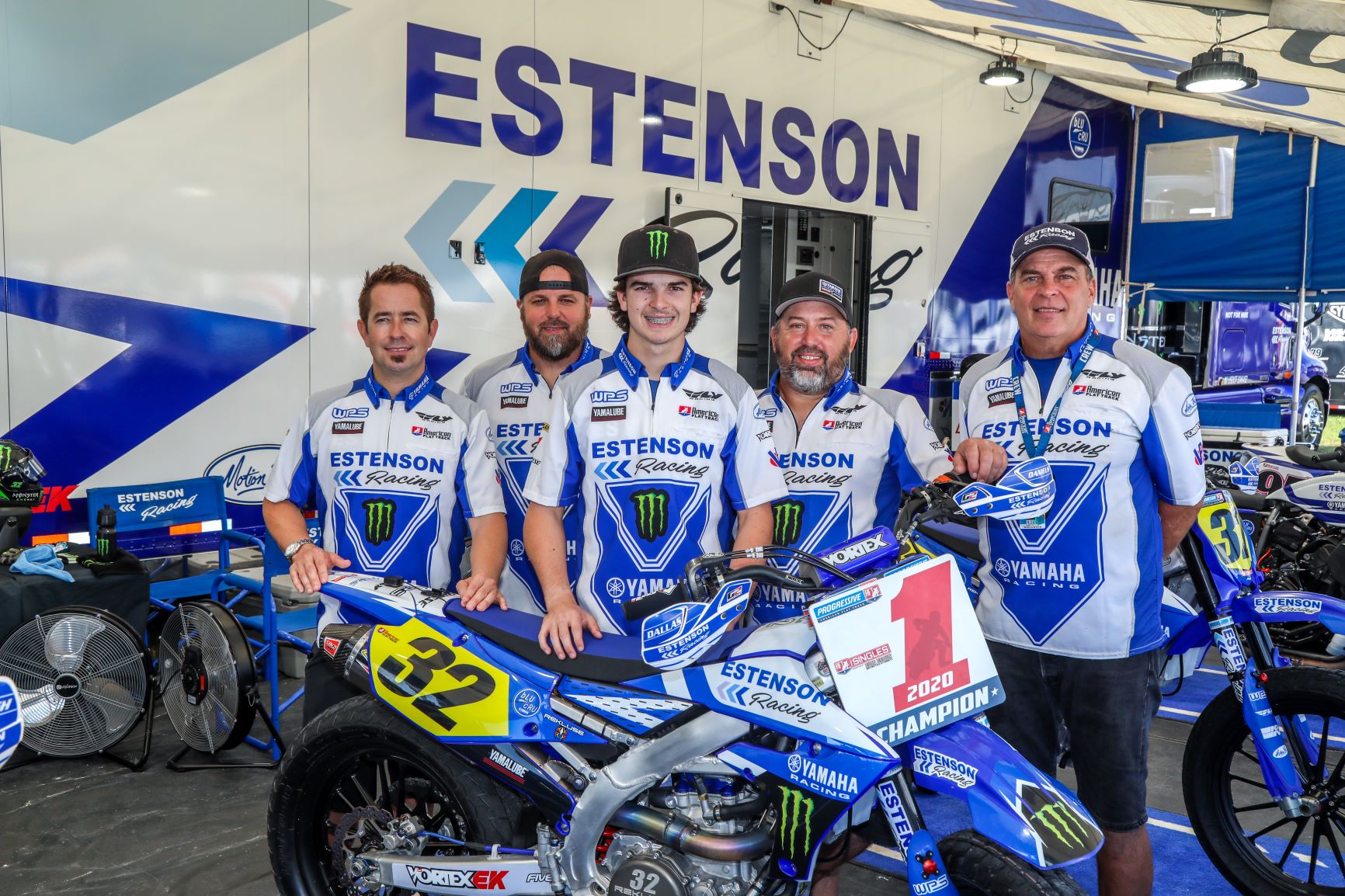