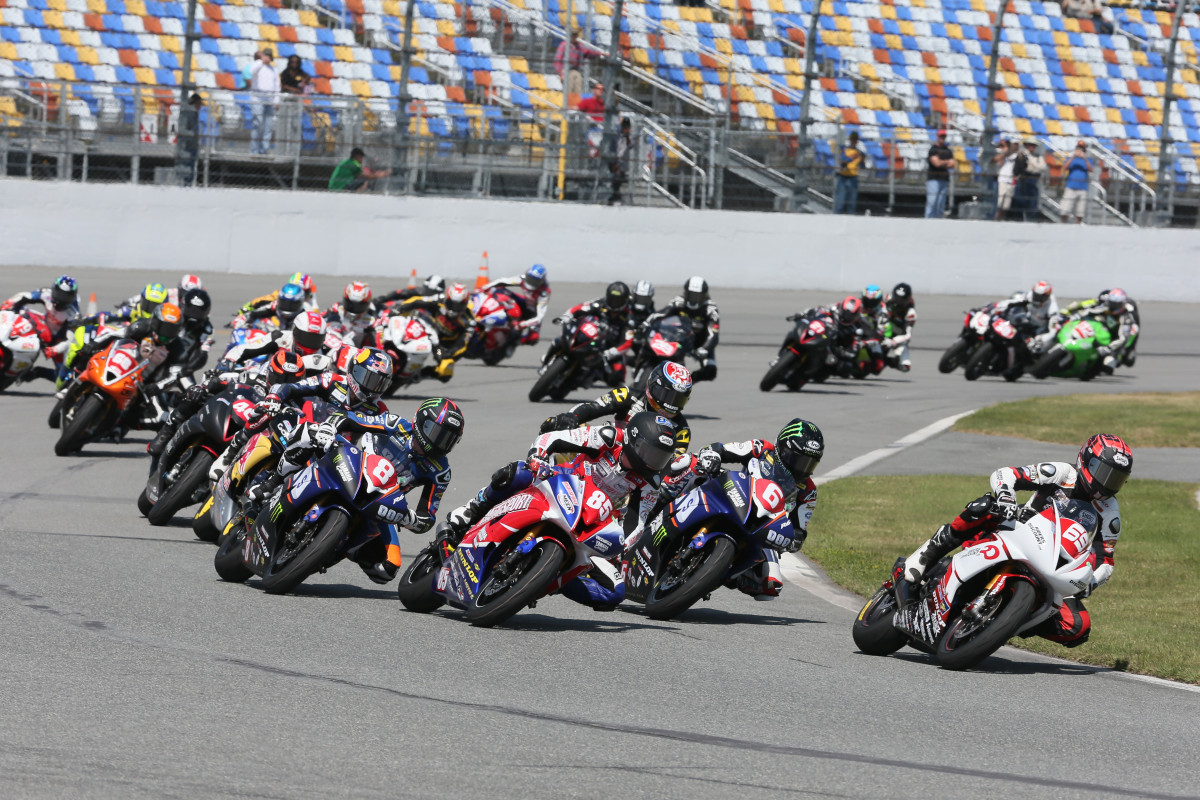 The uninitiated may not instantly recognize the significance of this year’s doubleheader that will offer up the 79th DAYTONA 200 and American Flat Track’s season-opening DAYTONA TT on a single Saturday billing at Daytona International Speedway.

Those outsiders might not understand just how perfectly paired they are as a double feature. They could think tarmac vs. dirt, sleek fully enveloped machines vs. naked beauty, knee pucks vs. steel toes, and not comprehend what the big deal is.

They may not understand that motorcycle dirt track racing and roadracing in America are intrinsically tied through shared histories that helped define the Grand National Championship.

We know that roughly half of the ten greatest Grand Prix racers to ever grace this earth first developed their skills as American Flat Trackers before completely revolutionizing the art of roadracing.

We know that the flow of talent now travels in both directions, as American Flat Track’s resurgence has encouraged a number of championship-winning roadracers to return to their dirt track roots in recent seasons.

We also know that those ties are further amplified at the DAYTONA 200, the most prestigious motorcycle race in American motorsports history, where its 200 mph, strategic draft wars on the tri-oval’s banked left-handers play out like a Mega Mile showdown.

Fans of either discipline who have yet to experience their first taste of the other from the stands are in for a treat. AFT aficionados already know what the DAYTONA TT has to offer, but they might be less familiar with The 200, despite its prominence.

The DAYTONA 200 is perhaps the only motorcycle race in the world with the gravity, prestige and history to create its own legends.

Consider that Scott Russell -- a World and AMA Superbike Champion, Suzuka 8 Hours winner, and 500GP podium finisher -- is known throughout the world as “Mr. Daytona” for his record five DAYTONA 200 victories. 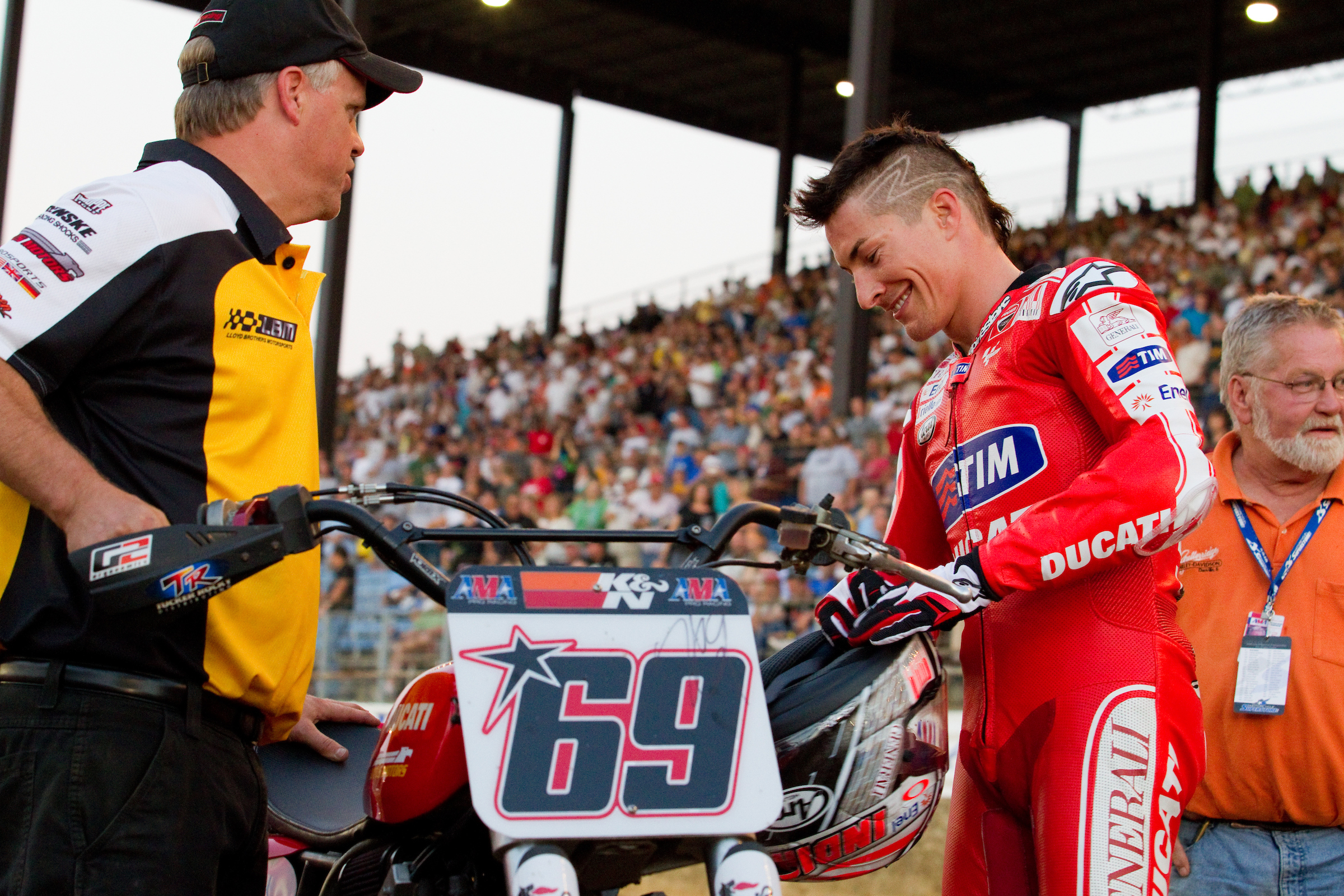 AFT part-timer and four-time AMA roadracing national champion Danny Eslick is perhaps most celebrated due to his modern mastery of the DAYTONA 200. One more win and he will sit equal with the aforementioned Russell and Miguel DuHamel as the race’s all-time winningest rider. 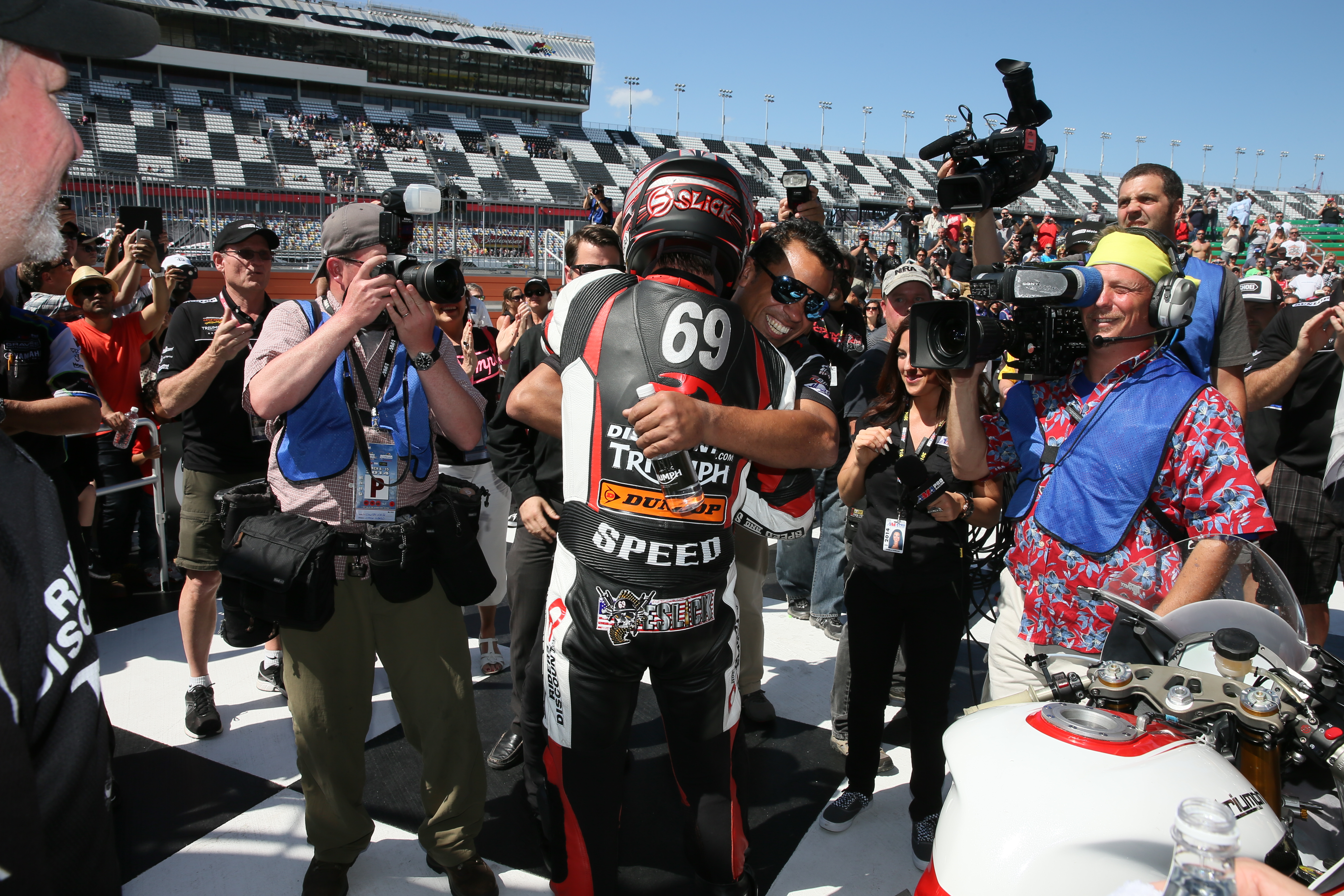 The 200’s singular position in the two-wheeled world is well earned. It effectively takes dozens of the nation’s (and world’s) best sprint racers and throws them into an endurance race on the high banks of Daytona International Speedway. Riders who are hard-wired to scrap and claw for position in every corner, are forced to simultaneously think strategically and flawlessly execute multiple tricky pit stops.

It’s a test of raw speed, mental strength, mechanical reliability, practiced teamwork, tactical acumen and dumb luck, making it unlike any other the motorcycle race in the world.

The stories of legendary DAYTONA 200s and their winners are voluminous enough to fill a book… in fact, they have (see The Daytona 200: The History of America's Premier Motorcycle Race, penned 1972 DAYTONA 200 winner Don Emde).

In fact, the tales of DAYTONA 200s won just by riders already confirmed to contest this year’s edition are Hollywood worthy on their own.

Back in the late ‘80s, the 200 was won six years in succession by riders who were either already 500GP World Champions or soon would be -- Roberts, Freddie Spencer, Lawson, Rainey, and Kevin Schwantz. 1989 was expected to be no different with future World Superbike kings Doug Polen and Scott Russell considered the heavy favorites.

But for all their speed and talent, they couldn’t hold it together for 200s miles, opening the door for the massive upset win of John Ashmead on a vintage VFR750. More than three decades later, Ashmead is still at it and still proving his endurance as the race’s all-time high miler.

2012 AMA Pro Vance & Hines XR1200 National Champion Michael Barnes retired from professional racing in 2014. He came out of retirement two years later at the age of 47 to participate in what the native Floridian views as his home race -- and promptly won. That achievement made him the oldest winner in DAYTONA 200 history by more than a decade. Now he’s looking to push the gap even further by becoming the first rider to win in his 50s.

But don’t look to the successes of Ashmead and Barnes and assume the race only rewards the steadiest and most experienced of riders. No one accused Josh Herrin of being either of those things when he won the 2010 DAYTONA 200 as a teenager -- just blazingly fast. 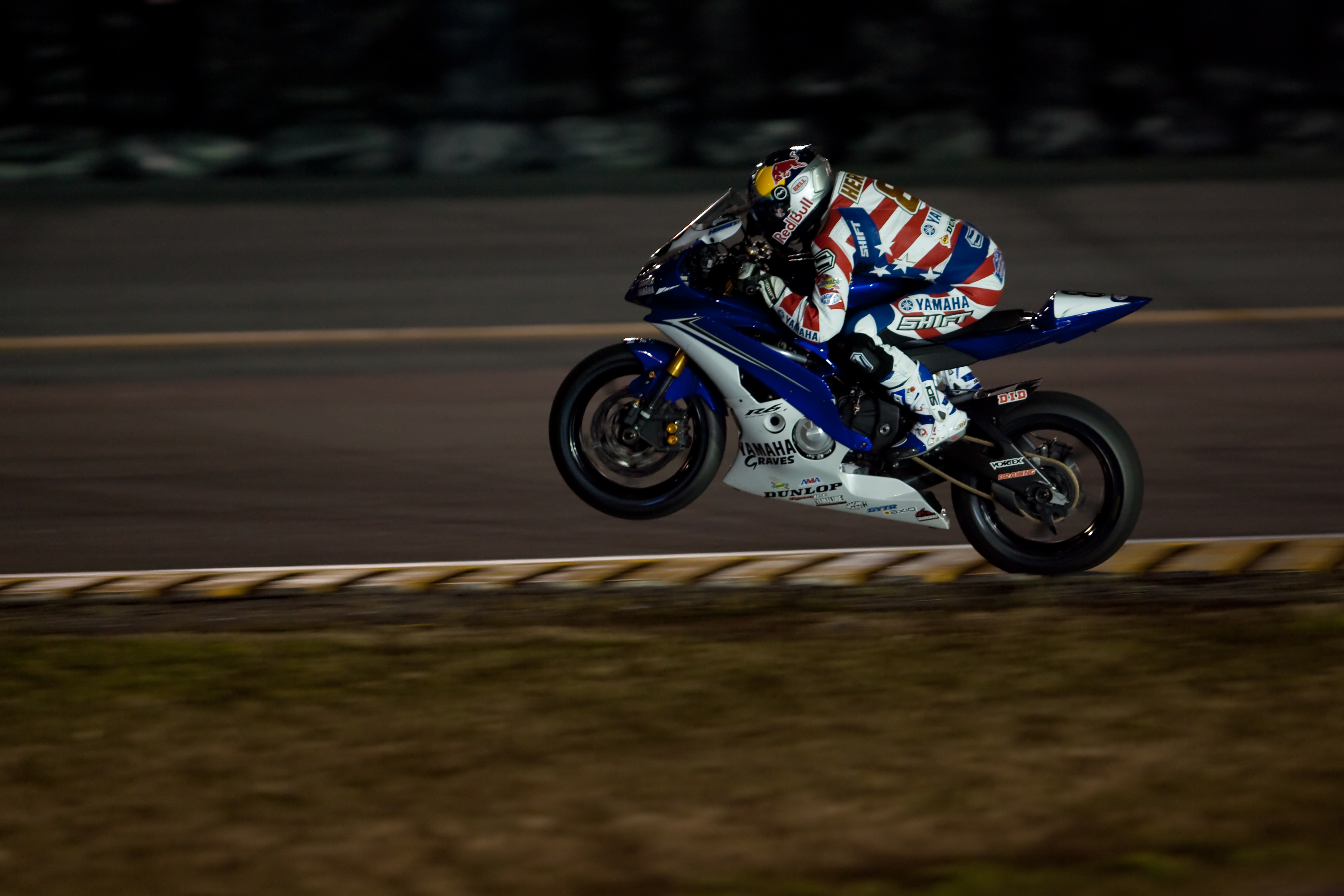 Herrin displaying the power of his machine in 2010

A decade later, he now has plenty of experience under his belt -- not to mention an AMA Superbike title. But he’s still an instinctive, wildly talented, and occasionally unpredictable pilot, who also brings the credibility of claiming multiple MotoAmerica Superbike victories a year ago with him to the DAYTONA 200 grid.

Then there is Jason DiSalvo, who took Ducati to its first-ever DAYTONA 200 triumph in 2011. Adding to that already-tight AFT connection, he did so with Team Latus Motors, which recently announced its return to American Flat Track racing in 2020. 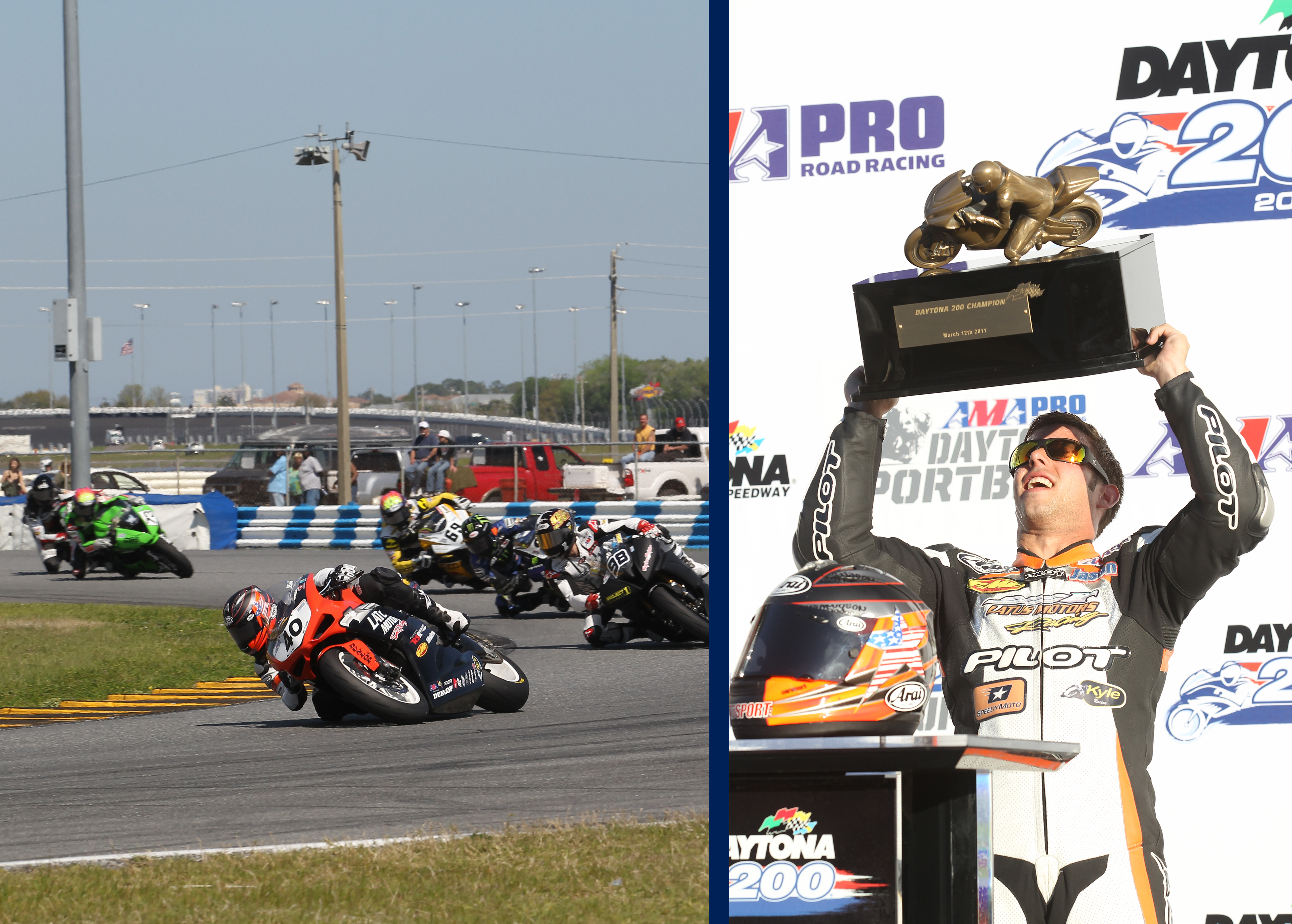 But perhaps the most intriguing case is that of a non-winner… at least officially. Josh Hayes, a four-time Superbike king and the second most decorated racer in AMA/MotoAmerica history by practically any measure, claimed the checkered flag first in 2008.

However, he was later disqualified for an illegal crankshaft. As a result, the win was awarded to his roommate and future Ducati Superbike superhero Chaz Davies.

For all of Hayes’ titles and wins, a victory in the DAYTONA 200 has still eluded him. Could 2020 be the year?

While a certified legend maker, the DAYTONA 200 is not only of interest due to its historical significance. It’s also an incredible show to see in person -- not to mention a mighty fine opener for the opening salvo of the AFT SuperTwins era.

Tickets are available now for this match made in racing heaven -- the DAYTONA 200 and DAYTONA TT; united by decades of history and destined to make further history together just weeks from now.